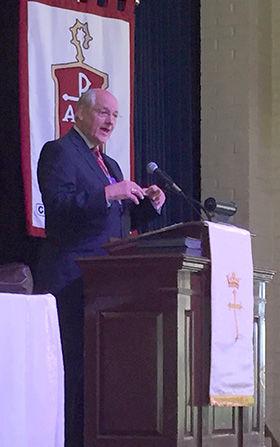 Bishop B. Michael Watson, ecumenical officer for the Council of Bishops, speaks of the importance of work toward Christian unity. Photo by Heather Hahn, UMNS.

Two denominations with historic ties to John Wesley’s Church of England are strengthening their ties to each other.

While meeting Nov. 4-7 at Epworth By The Sea, the Council of Bishops moved The United Methodist Church a step closer toward full communion with The Episcopal Church.

The bishops authorized the preparation of legislation to carry out the full communion proposal — “A Gift to the World: Co-Laborers for the Healing of Brokenness.”

Full communion means each church acknowledges the other as a partner in the Christian faith, recognizes the validity of each other’s baptism and Eucharist, and commits to work together in ministry. Such an agreement also means Episcopalians and United Methodists can share clergy.

“This full communion agreement is not proposing a merger of our churches,” the proposal says. “Yet we seek to live into the vision given to us by Jesus, who prayed that we may all be one.”

United Methodist bishops will take up legislation related to this proposal when they meet in May 2019. At that point, the bishops will decide what to submit to General Conference, the denomination’s top lawmaking assembly.

The timeline calls for General Conference to act on the proposed full communion agreement in 2020 and the General Convention of The Episcopal Church to do the same in 2021.

Throughout the morning of Nov. 6, the bishops heard from their staff members who focus on this ecumenical work. They also joined in an ecumenical worship service led by their Episcopal partners in the full communion dialogue. Later, those partners joined in a panel discussion.

The Rev. Margaret R. Rose, The Episcopal Church’s deputy for ecumenical and interfaith collaboration, likened the dialogue to a prayer Episcopalians say during Eucharist.

“One of our prayers in communion is that we reveal the unity of the church,” Rose said. “That, to me, is about uncovering something that is already there. Part of this full communion conversation is exactly about that.”

United Methodists and Episcopalians have joined in bilateral talks since 2002, said the Rev. Kyle Tau, a Council of Bishops ecumenical staff officer who has helped with the dialogue.

As the proposed agreement notes, the denominations are “blessed in that neither of our churches, or their predecessor bodies, have officially condemned one another.”

The connections go deeper than a simple lack of rancor. Both denominations can claim the Church of England as a mother church. Arguably, they owe their separation less to theological differences than to the disruption of the American Revolution. 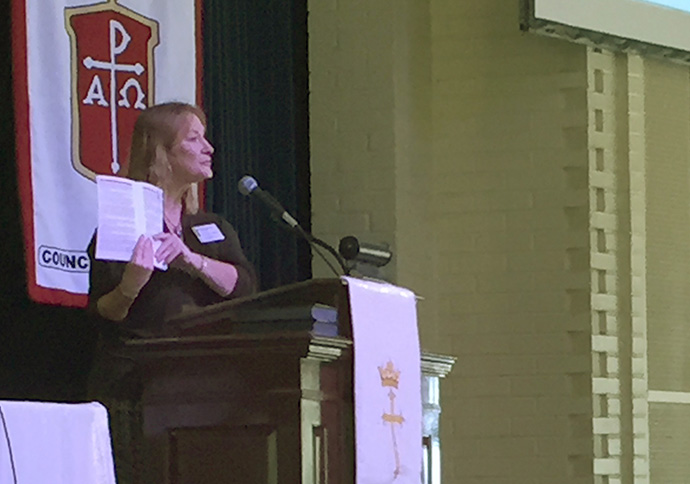 By 1784, Wesley’s efforts led to the birth of a new U.S. denomination that eventually would become the multinational United Methodist Church. The Episcopal Church, which would retain its close ties to the Church of England, officially got started in the U.S. five years later.

Both denominations also have struggled with the sin of racism. As “A Gift to the World” notes, the churches share common forebears in Richard Allen and Absalom Jones, both members of St. George’s Methodist Episcopal Church in Philadelphia.

“We recognize the lasting sin of racism in our society and our churches,” says the proposed full communion agreement, “and affirm the need for ongoing repentance, truth telling, and work for racial justice and healing.”

In recent years, both denominations have struggled with disagreements over how to best minister with LGBTQ Christians. The United Methodist Church plans to focus on that dispute at a special General Conference next year.

The global Anglican Communion, in 2016, imposed sanctions on The Episcopal Church after it began allowing clergy to officiate at same-gender weddings.

The Rev. Canon C.K. Roberston, who acts as a sort of chief diplomat for The Episcopal Church, told United Methodist bishops that the rift with the wider communion already is starting to heal.

“We’ve turned a corner in many ways in the communion as we focus once again on our relationships in Christ as opposed to focusing on our disagreements,” he said.

In 45 years of United Methodist ministry, Watson said he has seen ecumenical engagement in the wider Christian family lead to stronger family bonds closer to home.

“Pastors, laypeople and churches that are involved ecumenically and in interfaith relations where they are also get along better at home in The United Methodist Church,” Watson said. “Our unity is strengthened within when we engage robustly with those outside.”

At a time of great stress in the church, the Council of Bishops president urged colleagues to trust God and see the world through the lens of Scripture.
Social Concerns

In the wake of violence targeting minority groups, United Methodist leaders pledge themselves to educate about dangers of white supremacy.

Wesleyan scholars say that when it comes to Methodism’s founder, the subject of unity gets complicated.