Vulnerable residents of the Alaska Native Village of Newtok will soon have safe drinking water as part of a growing United Methodist commitment to Native American ministries.

The grant of nearly $1 million from the United Methodist Committee on Relief, approved Oct. 12, will provide 21 self-contained sanitation units for the homes of those being moved because of environmental risks posed by floods, shore erosion and melting permafrost.

Woven throughout the Oct. 11-13 meeting of the United Methodist Board of Global Ministries — of which UMCOR is a part — was a focus on both the denomination’s tumultuous history with native peoples and the mission agency’s efforts to engage in support and education on Native American issues.

“Now we’re starting to see the church being on the right side of history instead of the other side,” the Rev. Chebon Kernell Jr., a Seminole and ordained elder in the Oklahoma Indian Missionary Conference, told United Methodist News Service.

The Rev. David Wilson said he has noticed changes within the denomination toward Native Americans since the adoption of the Act of Repentance in 2012.

“I like to think that it made a big difference,” he said. “It’s never what you want it to be, what you think it should be, but we continue to work.”

Native people may grow weary of telling their story over and over again, Wilson added, “but it pays off in dividends in terms of helping the church understand.”

Here are some of the topics on Native Americans found in the 2016 United Methodist Book of Resolutions:

Trail of Repentance and Healing

Regarding Native American Culture and Traditions as Sacred

The Advance, a voluntary giving program of the church, also has projects related to Native American ministries.

As the mission agency’s executive secretary of Native American and indigenous ministries, Kernell is helping to lead those efforts to work alongside Native communities in healthy relationships.

On a denominational level, he also is coordinator for the Council of Bishops’ effort to fulfill the “Act of Repentance toward Healing Relationships with Indigenous Peoples,” adopted by General Conference in 2012.

But, as Kernell detailed for the board’s directors, Native communities have faced peril from all segments of U.S. society. War, disease and displacement had a devastating effect on those who had occupied the land for some 16,000 years, bring a population estimated in the millions to about 240,000 today.

“We’re just two steps away from not being here anymore, from being extinct,” Kernell said.

Atlanta is the homeland of Muscogee and Cherokee people. An opening worship complete with Native word and song, an offering of dried tobacco leaves and a water ceremony included video highlights from a visit the day before to Standing Peachtree, where one of the historic Muscogee villages once stood and now the site of the City of Atlanta Chattahoochee River Intake.

When the Board of Global Ministries decided to move its headquarters from New York to Atlanta, the agency pledged to address the issue of demeaning sports mascots like the one used by the Atlanta Braves through advocacy and education, Kemper said in his report to directors.

But the decision was not without controversy on that account and the Rev. David Wilson, who has a long relationship with the mission agency, was disappointed.

Wilson, a member of the Choctaw Nation, district superintendent of the Oklahoma Indian Missionary Conference and currently a Global Ministries director, said he had been in conversation with Kemper about that promise since the move.

The commitments and meeting presentations “have been very meaningful for us,” Wilson told UMNS. He believes that board members and staff have started to understand “how complex our life is as Native American people in the church.” 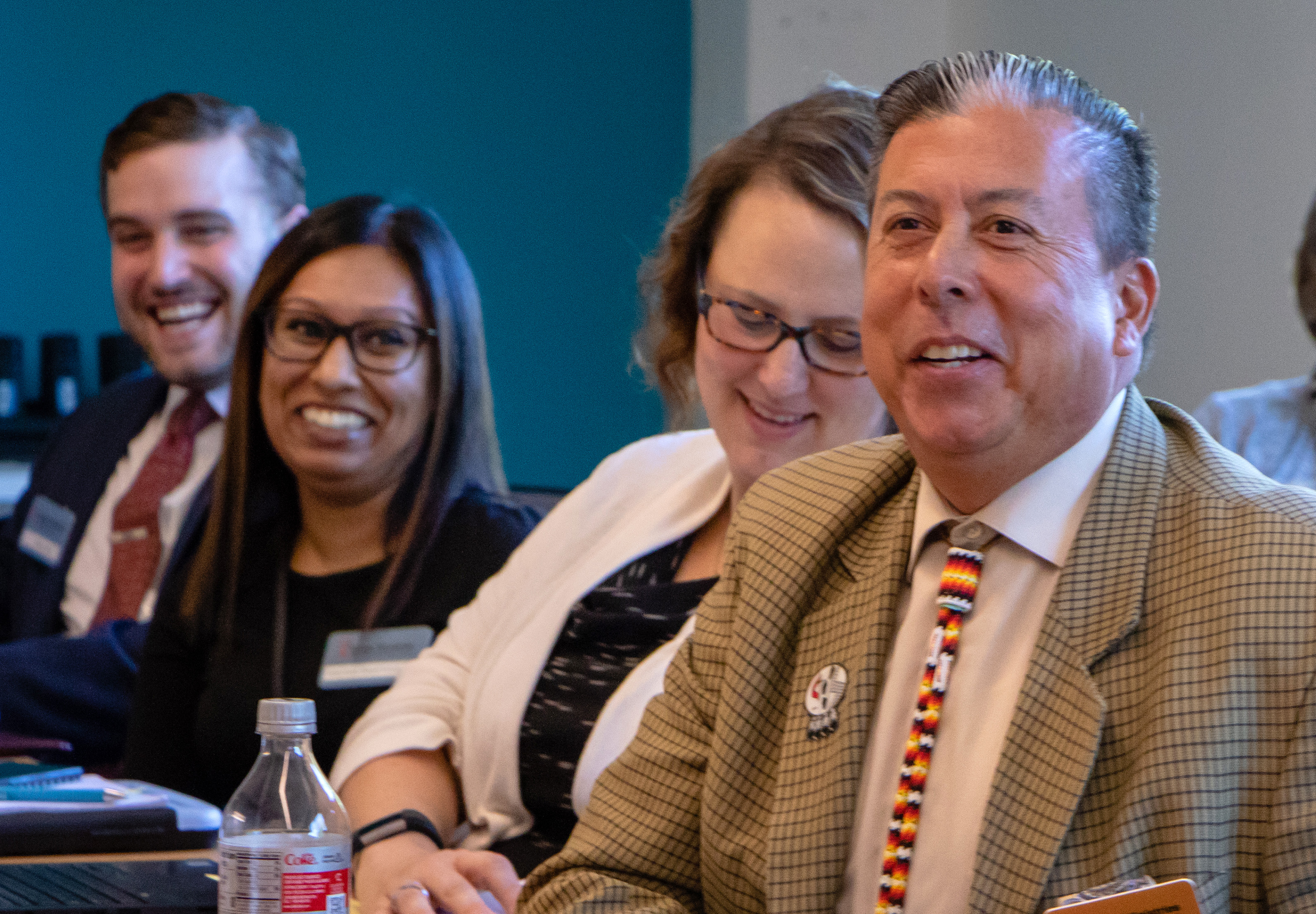 The first opportunity to take a public advocacy stance, Kemper said, was the protest over oil pipeline access across lands owned by the Standing Rock tribe.

It offered “a crucial moment,” he said, to demonstrate solidarity for the protection of tribal water resources. The mission agency visited the protest site and later held a press conference at the Center for Civil and Human Rights in Atlanta.

Since then, Global Ministries has:

Kemper, who visited the Ohio site recently, told directors the “incredible story” behind the mission church and cemetery there, a United Methodist heritage landmark that includes the remains of the first Methodist missionary in the U.S. — an African-American man named John Stewart who was sent to minister with Native Americans.

The controversy over sports names and mascots was addressed during the meeting with a screening of “More Than a Word,” followed by a panel discussion. 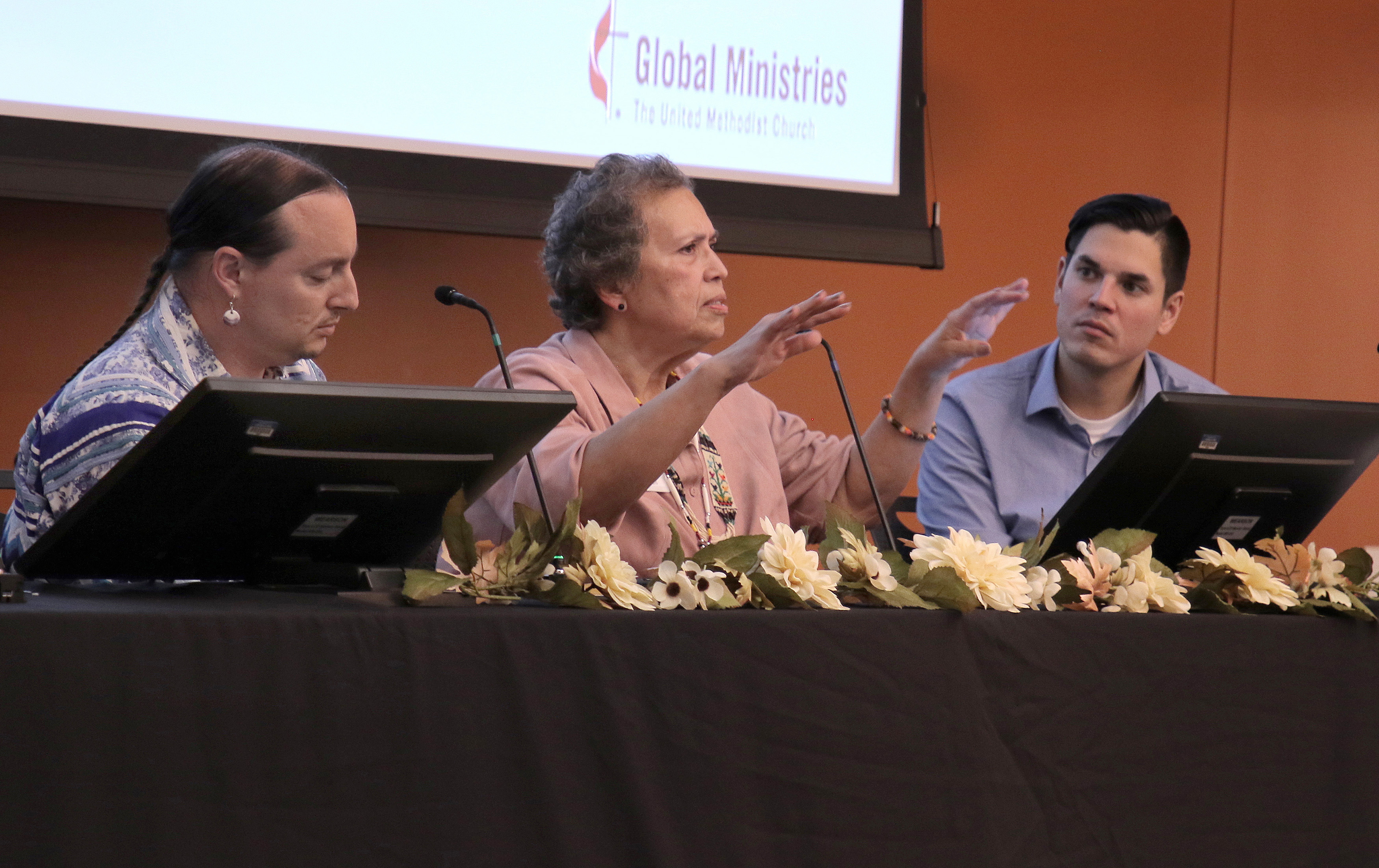 Marcus Briggs-Cloud, the Rev. Anita Phillips and filmmaker John Little lead a panel discussion after the screening of “More Than a Word” during the fall meeting of the Board of Global Ministries. Photo by Anthony Trueheart, Global Ministries.

John Little, enrolled in the Standing Rock Sioux Tribe, co-directed the film with his brother, Kevin, as a way to get the Native perspective across in thoughtful way. “We really wanted to have a conversation and move beyond a shouting match,” he told the Global Ministries directors.

Phillips, who said she has witnessed the suffering of multiple generations of Native Americans, noted that one of her questions to God has been, “How can I be a part of the healing of what’s happening to my people?”

The event brought together nearly 200 members for the ordination of new leaders, lectures, worship and other celebrations.
Social Concerns