Mozambique Area Bishop Joaquina Nhanala, the first and only female United Methodist bishop in Africa, has learned to weigh when and how to respond to falsehoods prompted by blatant acts of sexism.

“At the beginning, I would try to clear my name by responding to it,” she explained during a virtual gathering to promote and celebrate women’s leadership in the church.

But that took energy and time. Eventually, Nhanala realized that “deeds speak louder than words.”

The bishop’s deeds so far have included appointing eight women among her area’s 20 superintendents.

The pandemic scuttled plans by the United Methodist Commission on the Status and Role of Women to gather 200 to 250 women in the Chicago area this fall. But the Oct. 8-10 virtual women’s leadership summit attracted that many, with others registering to view a limited-time archive afterward.

“Maybe God envisioned something bigger,” said Dawn Wiggins Hare, the commission’s top executive, as participants checked in from locations across the U.S. and in Europe and Africa.

The goal was to confront present realities but also to celebrate sisterhood, build relationships and learn from the experiences of each other and of summit presenters. 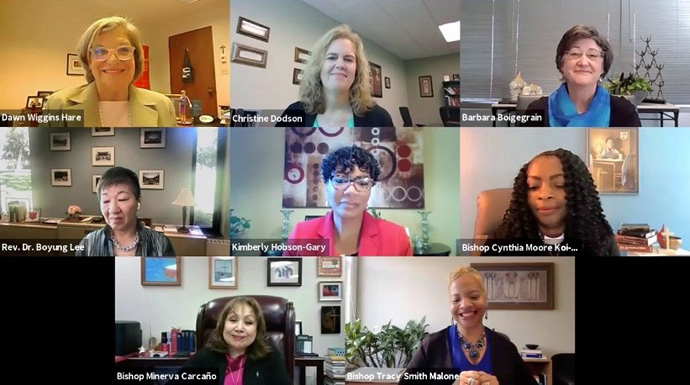 Lallene J. Rector, president of Garrett-Evangelical Theological Seminary, stressed that faith calls upon women of the church to step up, speak out and take risks. “We are to lead wherever we have been called,” she said.

Garrett was a summit sponsor, along with Discipleship Ministries, Wespath and the Texas Methodist Foundation.

“I AM Her” served both as theme and rallying cry for the event. It carried through the praise, song and reflection offered by Rev. Cynthia A. Wilson, a well-known United Methodist worship leader, and through the preaching by women bishops.

“It is the light of Christ within us that makes us shine,” declared East Ohio Bishop Tracy Smith Malone, also the president of the Commission on the Status and Role of Women. During the opening worship service, she urged the women “to stir up good trouble” and confront unjust systems that marginalize people.

In a conversation about civil rights and voter suppression, two African American women shared some pivotal experiences with participants at the I AM Her Women’s Leadership Summit.

Clara Ester grew up in Memphis under the Jim Crow law and was trained to be a community organizer in high school. She became actively involved in the civil rights movement through a United Methodist pastor, the Rev. James Lawson. They were involved in the Memphis sanitation strike, and the Rev. Martin Luther King Jr. came to offer his support.

Keynoter the Rev. Nadia Bolz-Weber claimed her voice when she broke from the male-dominated Church of Christ of her youth, where “girls went to Christian charm class to learn how to be sweet, pretty and submissive” and female pastors were unacceptable.

Her unconventional faith journey eventually led her to become a best-selling Christian author, noted speaker and an ordained pastor in the Evangelical Lutheran Church in America. She is the former pastor of the House for all Sinners and Saints in Denver.

Besides the keynote, Bolz-Weber brought in a few colleagues for an informal session on women’s identities and how that shapes their lives. “My female friendships have saved me in a lot of ways,” she said. “I’m just so grateful to have the women in my life that I do.”

The stories of strong, faithful women in the Bible can provide inspiration. During a panel discussion, the Rev. Juyeon Jeon, pastor at Faith United Methodist Church in Genoa, Illinois, chose Mary, the sister of Martha, as her favorite.

Mary sat listening to Jesus instead of helping Martha with her tasks. “Sitting at Jesus’ feet was supposedly a man’s role at this time,” Jeon noted. “Mary is violating a clear social boundary; she is humiliating her house.” While to some that might seem selfish, she added, “to me, she was a silent protester.”

For Jeon, who grew up in Korea and attended a conservative church, “Mary is speaking me to anew, encouraging me to be confident,” she said.

Strong women in modern times also were saluted. Louisiana Bishop Cynthia Fierro Harvey, who serves as president of the United Methodist Council of Bishops cited the late U.S. Supreme Court Justice Ruth Bader Ginsburg when she invoked the parable of the persistent widow. The longer you live, Harvey said, you realize “that persistence is a pretty strong faith builder.’ 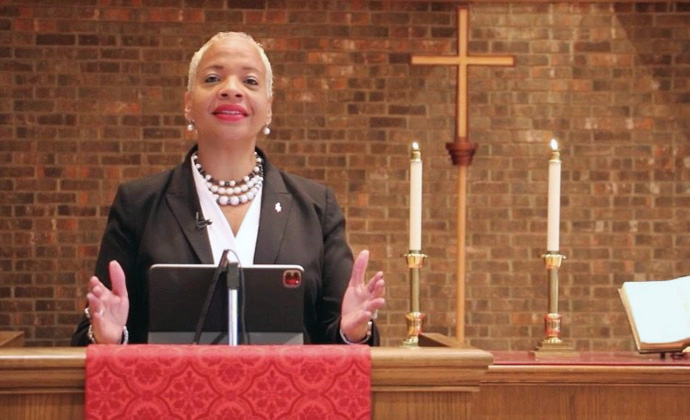 East Ohio Bishop Tracy Smith Malone, president of the Commission on the Status and Role of Women, preached during opening worship for the I AM Her Women’s Leadership Summit. Screenshot courtesy of GNTV Media Ministry.

Bader Ginsburg is an example of another woman for whom justice did not arrive like a lightning bolt but came with dogged persistence. “Even when her views did not prevail, she still fought,” Harvey pointed out.

Other lay and clergy participants joined the bishop of Mozambique in offering some straight talk about their experiences with the sexism that still presents barriers in the church and in the larger society.

Christine Dodson, board vice president of the General Council on Finance and Administration, recalled the pay discrimination she encountered in engineering jobs at the start of her career. She credits a female vice president at one company with changing the direction of her life. Because of the influence of her own female mentors, “I claim my role in investing in the next generation,” she said.

Logo courtesy of the United Methodist Commission on the Status and Role of Women.

After Barbara Boigegrain, the chief executive officer of Wespath, took the helm of The United Methodist Church’s pension fund, she learned that discussions in the boardroom often continued in the men’s restroom. So she decided to follow the men in. “That stopped that behavior right away,” she said. “I only had to do that once.”

It’s essential for women “to lift each other up,” Boigegrain added, and to seek men who will do the same.

The Rev. Boyung Lee, academic dean at Iliff Theological Seminary, credits her achievements to the strong women in her life. Lee said she takes her call not only from God but also from her community, “especially from women whose voices need to be heard, whose voices the church needs to pay attention to.”

Bishop Cynthia Moore-Koikoi said she learned as a pastor that she would face more challenges as a woman than as an African American clergyperson.

Such challenges became a threat after her appointment as bishop of the Western Pennsylvania Conference was announced in 2016. An anonymous letter claimed that in her new conference, “people carry guns and they shoot to kill,” Moore-Koikoi told the gathering. The letter detailed the writer’s view of the hierarchy of privilege: White male pastors got the best appointments and Black men got second best, followed by white women. Black female pastors got the leftovers.

Moore-Koikoi said she made sure her first appointments in Western Pennsylvania were key appointments for women and for women of color. She also worked with her cabinet to close the pay differential between male and female clergy.

But she added that she also has made a few bad appointment decisions in the past and encouraged women to own up to their mistakes. “Once you admit that mistake, God’s grace will help you fix it,” she said. 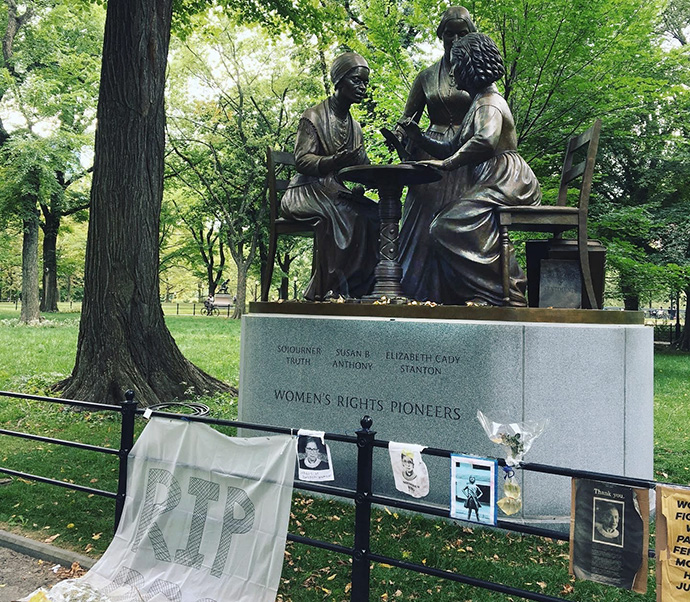 A 14-foot-tall bronze monument honoring women’s rights advocates Sojourner Truth, Susan B. Anthony and Elizabeth Cady Stanton was unveiled this summer in New York’s Central Park. The 100th anniversary of the ratification of the 19th amendment and women winning the right to vote was celebrated in 2020. Photo by Linda Bloom, UM News.

The 100th anniversary of the 19th Amendment to the U.S. constitution — finally giving women the right to vote — was both a cause for celebration and a call for action at the I AM Her summit.

Bishop Hope Morgan Ward took note of the “Monumental Women” statue unveiled in New York’s Central Park in August to commemorate the occasion. “Three women are at a table, dreaming, working, visioning and strategizing together,” she said.

The statue depicts three early suffragists — Sojourner Truth, a bold, fearless abolitionist; Elizabeth Cady Stanton, a thinker and writer; and Susan B. Anthony, a master orator. Together, Stanton and Anthony were amazing, Ward said, “with Stanton forging the thunderbolts and Anthony delivering them.”

Ward has traveled to Seneca Falls, New York, where the first women’s rights convention in the U.S. was held in July 1848 and she shared some of her interest in the progress made by the women’s rights pioneers over the decades.

It took more than 900 campaigns, waged at local, state and national levels, before the 36th state, Tennessee, approved women’s right to vote on Aug. 18, 1920.

Even the 19th Amendment did not guarantee access to voting rights, “particularly for women of color,” Ward said, and the need for present-day action to safeguard the right to vote continues.

United Methodist conferences are confronting the sin of racism through prayers, calls for justice and education on white supremacy.
General Church

Many annual conference gatherings in Europe were postponed until autumn due to COVID-19. Unfortunately, most will still be unable to meet in person.
Global Health