Pandemic and schism have combined to challenge The United Methodist Church in an unprecedented way.

And that offers a not-to-be-missed opportunity, according to the Rev. Mike Slaughter. 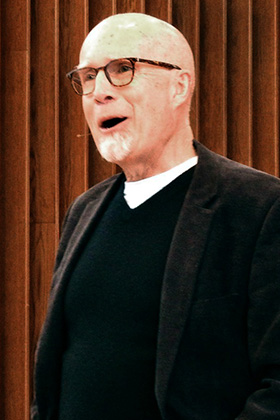 The Rev. Mike Slaughter gives the keynote address at a Nov. 16 event in Dallas titled “Space at the Table: Conversations of Hope for the UMC Future.” Photo by Sam Hodges, UM News.

About 300 clergy and laity came to Lovers Lane United Methodist Church for “Space at the Table: Conversations of Hope for the UMC Future,” and others joined by livestream.

A follow-up to a similar event held in Atlanta in August, “Space at the Table” offered panel discussions with United Methodist academics and young clergy of the denomination. Another panel featured three South Central Jurisdiction episcopal leaders: Bishops Cynthia Fierro Harvey, Ruben Saenz and David Wilson, who was elected earlier this month and is United Methodism’s first Native American bishop.

The program included the airing of a video podcast with retired Bishop Will Willimon, author of the new book “Don’t Look Back: Methodist Hope for What Comes Next.”

The Rev. Michael Bowie, national director of the denomination’s Strengthening the Black Church for the 21st Century, also spoke and shared a sentiment that seemed to be a consensus.

“Normal will never come back,” he said.

On top of that, U.S. annual conferences have, since 2019, approved more than 820 local church disaffiliations. Many of those churches are choosing to enter a new, breakaway traditionalist denomination, the Global Methodist Church.

“We just hope we come out of this with a renewed sense of excitement and also a sense that we’re rebirthing something,” Copeland said.

Some speakers, including Slaughter in his keynote address, made a point of showing their love and appreciation for The United Methodist Church.

“This is the community that has formed me and allowed me to have questions, to change, to be different, to grow,” said Slaughter, pastor emeritus of Ginghamsburg (United Methodist) Church in Ohio, which under him grew rapidly and became a recognized leader in small-group ministry and missions.

“Jesus is Lord, and everything else is conversation,” he said.

After his address, Slaughter told UM News that the old models of church growth, which worked during his career as pastor, may no longer be viable. He said house churches and other smaller models are needed, and a more engaged faith.

“We’re going to see more of a focus on calling workers than worshippers,” he said. “In the New Testament, 87 times Jesus said ‘follow me,’ two times he said ‘believe in me,’ and zero times did he say worship me. … What if we practiced the teachings of Jesus instead of talking about the teachings of Jesus?”

In the podcast that was aired, Willimon and the host, the Rev. John Stephens of Chapelwood United Methodist Church in Houston, also dug into the question of how a church remains relevant today.

Willimon repeated his contention that inward-looking local churches are doomed while outward-focused ones have a future.

A longtime, well-known provocateur within the denomination, Willimon chided progressives and traditionalists who walk away from one another.

“It is dangerous, even blasphemous, for me to say, ‘Lord, I want to be at your table, but I’m bothered by these people around me,’” he said. “We’re not allowed to do that.”

In the academics’ panel, the Rev. Rebekah Miles of Perkins School of Theology urged The United Methodist Church to embrace full LGBTQ inclusion and get on about mission.

The Rev. Natalya Cherry, of Brite Divinity School, said  “it is in our (Methodist) DNA” to be on the side of the oppressed, including LGBTQ persons.

“I don’t want us to think we have finished with issues of race. … We have a lot of house-fixing to do,” she said.

During the bishops’ panel, Saenz noted the changing demographics of the U.S., and said his views about how the church needs to change have been shaped by conversations with young people.

His fear, he said, is that older United Methodists “won’t hand over the reins.”

The topic of getting beyond institutional preservation and the usual ways of doing church surfaced in the young clergy discussion as well.

“Adaptation is not innovation,” said the Rev. Bryant Phelps, pastor of the (United Methodist) Church of the Disciple in DeSoto, Texas.

The Rev. Scott Gilliland, pastor of Arapaho United Methodist Church in Richardson, Texas, said during the same panel that his church is growing, in part by welcoming those fleeing denominations that require what he described as “ideological purity.”

“I say that in Christian love,” he added, drawing laughs.

But Gilliland bore down on the point — echoed by Willimon — that for all its flaws, The United Methodist Church offers much to those who have felt wounded by other churches.

“They want to have a place where they won’t be called a heretic, but someone who is working out their faith,” Gilliland said. “They’re finding that in The United Methodist Church.”

Harvey, former president of the Council of Bishops, told the crowd that the conversations at “Space at the Table” had encouraged her.

“They’re honest. They’re raw. They give me hope.”

“If you live life long enough, you have a moment when it all literally falls down,” writes the Rev. Dr. Tori Butler. She shares the time this happened to her and how she got back up.
Faith Stories

People with weight issues should take charge of their own health in order for God to use them as God needs. The Rev. Telley Lynnette Gadson spoke during a four-city wellness and education tour organized by Strengthening the Black Church for the 21st Century titled “Build a Better You.”
Congregations