Slowly but surely, church leaders are combing through The United Methodist Church’s main policy book with one goal in mind.

General Conference, the denomination’s top lawmaking body, in 2012 assigned the Standing Committee on Central Conference Matters to determine what in the Book of Discipline truly applies around the globe. In 2016, General Conference reviewed a draft of the committee’s work on chapters dealing with the local church, conferences and church property.

Ultimately, church leaders hope the 2020 General Conference will approve the standing committee’s recommendations as part of what they are calling a General Book of Discipline. 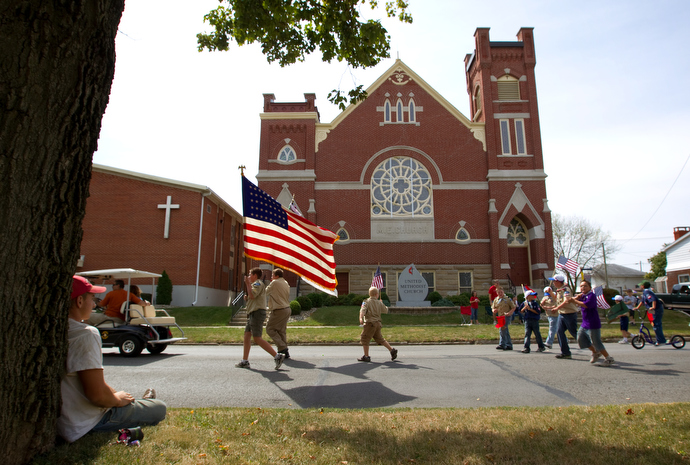 Boy Scouts from Troop 222 march in front of Leipsic (Ohio) United Methodist Church in 2010 during the parade that kicks off the town's annual Fall Festival. Watching the parade, at left, is Luke Lammers. File photo by Mike DuBose, UMNS.

However, unlike U.S. jurisdictions, central conferences have authority under the denomination’s constitution to make “such changes and adaptations” to the Book of Discipline as missional needs and differing legal contexts require.

In doing the work, the standing committee has the following partners:

For example, central conferences already adapt parts of the Discipline to accommodate the requirements of different property laws. They also, in some cases, have different ways of credentialing clergy.

Central and Southern Europe Area Bishop Patrick Streiff said the committee has heard feedback from U.S. church members that shows growing uneasiness that central conferences can adapt parts of the Discipline while the U.S. cannot.

However, he said, trying to address that uneasiness is beyond the scope of the current work on the General Book of Discipline.

General Conference already has determined that certain parts of the Discipline absolutely are not adaptable. Changing them requires at least General Conference action and possibly annual conference action too. Those parts are the Constitution, Doctrinal Standards and Our Theological Task, The Ministry of All Christians and The Social Principles. The denomination’s teachings on homosexuality, a source of intense debate, are in the Social Principles.

That still leaves the Book of Discipline’s Part VI, Organization and Administration, which contains the chapters most directly related to organizing ministry in the central conferences. It’s also the biggest section in the denomination’s policy book. 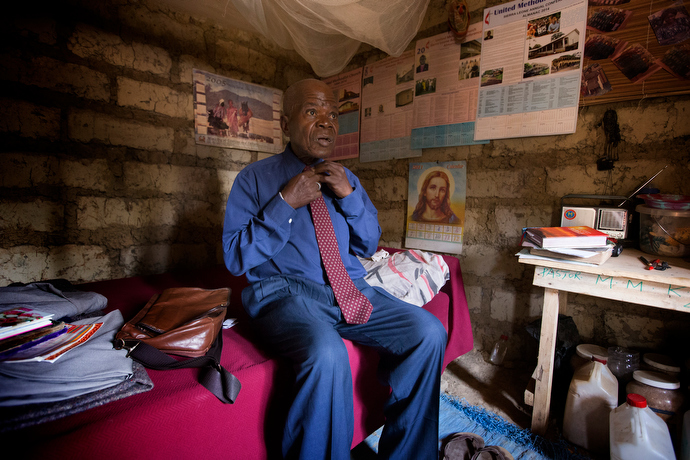 United Methodist Pastor Moses Sandy prepares to leave from his home near Kortihun village, outside Bo, Sierra Leone, for the first of two churches he will lead in worship in 2014. File photo by Mike DuBose, UMNS.

Now in its sixth year on the project, the standing committee is collaborating with three other denominational leadership bodies — the Faith and Order Committee, the Ministry Study Commission and the Connectional Table. The standing committee also is incorporating feedback from annual conferences.

Some 75 church leaders from those groups met to continue the work on Feb. 8-12 at La Maison de l’Esperance, or House of Hope, a guesthouse owned by the Côte d’Ivoire Annual Conference. Ivoirians were so excited to host such an international gathering that the meeting made news on national TV.

Beyond the national attention, Bishop Ciriaco Q. Francisco — president of the standing committee — said he was pleased with the progress the church leaders made.

“What they are doing now, after the meeting, are working on how to write (the legislation) and how to organize it,” said Francisco, who also leads the Manila Episcopal Area in the Philippines. 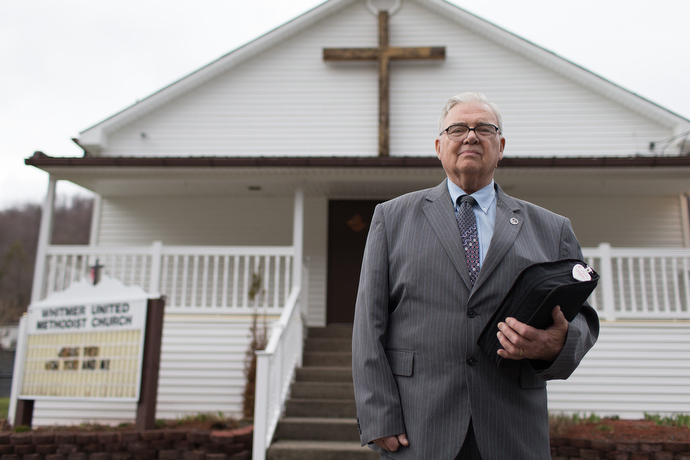 He emphasized the work is ongoing. The church leaders will not make any final decisions about what to submit to the 2020 General Conference until they meet in March 2019 in Manila.

Much of what the leaders are doing is going through Part VI’s paragraphs one by one to see what can be adapted in local contexts. Whatever the committee deems adaptable, it plans to propose moving to a new Part VII in the Book of Discipline.

This new part of the Discipline will still apply to the United States, and at least in the immediate future, it will apply to central conferences as well until they adapt portions of it. 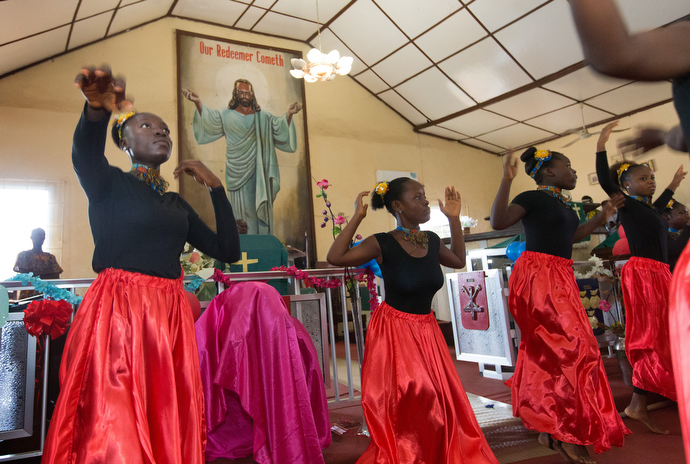 The team focusing on Chapter 5, which deals with church agencies, began its work by developing a “theology of agency.”

That central idea informs his team’s work as it reviews the tasks assigned to the denomination’s general agencies, Bickerton said. In practical terms, that means his team is trying to preserve the essentials these agencies do while keeping in mind how other parts of the church exercise their own agency.

“We’ve found that simply trying to parcel out adaptable and non-adaptable in that chapter is just highly confusing,” he said. “We are making an attempt to look at what are the essentials that can be found in a rewrite that will encompass our theology.” 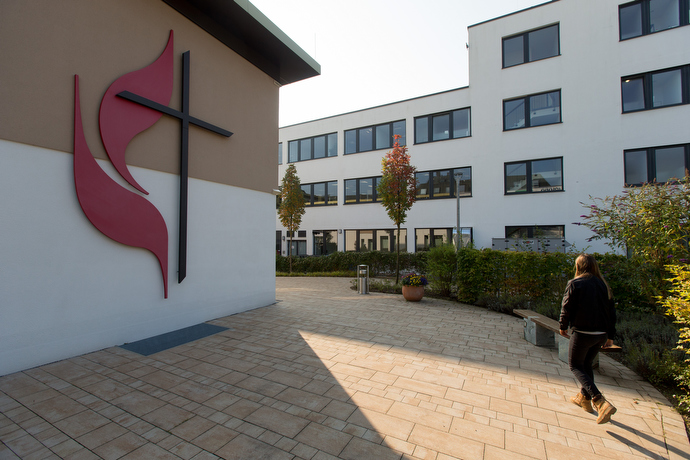 A parishioner arrives for worship at the United Methodist Church of the Redeemer in Munich, Germany. Photo by Mike DuBose, UMNS.

To carry out that revision, Bickerton said in a later session, his team will be consulting with the agencies’ top executives.

The work on the General Book of Discipline is just one of many denomination-wide projects that could make significant changes to the church’s top policy book.

The United Methodist Board of Church and Society, also at General Conference’s behest, is working with representatives from around the globe to propose revisions to make the Social Principles more globally relevant.

However, the effort drawing the most attention is the Commission on a Way Forward, which is looking at possible structural changes to help the church deal with deep divisions around the inclusion of LGBTQ individuals. The Council of Bishops plans to submit legislation based on the commission’s work to a special General Conference in 2019. 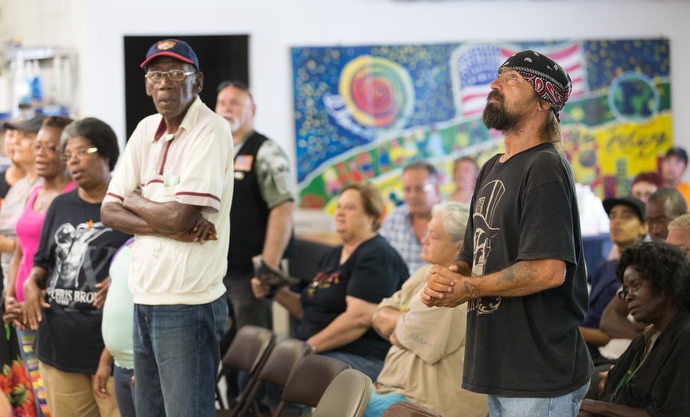 During the Côte d’Ivoire meeting, the church leaders heard an update on the Way Forward Commission’s work. The Rev. Kennetha Bigham-Tsai, chief connectional ministries officer for the Connectional Table, asked what impact the commission might have on the ongoing General Book of Discipline effort.

Retired Bishop David Yemba, a commission moderator, acknowledged he could not answer her question.

The standing committee’s next big meeting will take place after the 2019 General Conference.

A state-of-the-art outpatient department, kitchen and 120-panel solar system are among recent additions funded by the United Methodist Board of Global Ministries’ Global Health unit.
Bishops