Luella Krieger wanted to do something full time for the Lord. She expected that something would draw on her 21 years of experience as a nurse.

God had other plans, she said.

She ended up hanging up her medical scrubs and donning the various head coverings worn by women in Scripture. For the past 25 years, she has traveled the U.S. as an evangelist doing first-person dramatizations of such biblical heroes as Queen Esther, Lydia, Priscilla and Mary, the mother of Jesus.

She now nurses people’s faith through her Visitors from the Past ministry. She uses research and what she calls “sanctified imagination” to fill in the details of the women’s lives. Still, she always wants her audience to return to her primary source — the Bible.

“I try to put flesh on the bones of the Scripture,” she said. “I want people to go to the Scripture and find out what of what I said is right there in writing for them.”

Krieger is among a small group of U.S. United Methodists who have found their vocation as professional evangelists. Some are church consultants. Others, like Krieger, see their ministry as more like proclamation — sharing the gospel in a way that invites revival.

No matter what form their ministry takes, United Methodist evangelists face a tough career path. The vocation requires an entrepreneurial spirit as well as faith that God will provide.

“It’s a big step to leave the security of the pulpit or a secular job if you are a layperson — you have to really trust yourself,” said the Rev. Robert Zilhaver, a district superintendent in Krieger’s home Western Pennsylvania Conference. “It’s a lot of work, but it creates a kind of all-in spirit that attracts people to the gospel and changes a lot of lives.”

Zilhaver is the former pastor of Krieger’s home congregation, Lakeside United Methodist Church in DuBois, Pennsylvania. Because of his advocacy, Western Pennsylvania in 2013 recognized Krieger as its first conference lay evangelist. 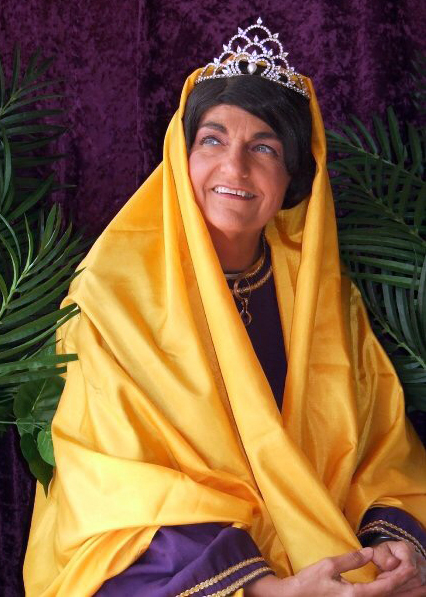 Evangelist Luella Krieger plays the biblical Queen Esther who denounced Haman the Agagite for plotting to destroy her and the Jewish people. Photo courtesy of Luella Krieger.

The conference is highly unusual among the 56 U.S. conferences in providing funding for health and pension benefits for its evangelists.

That lessens some of the burden, said Paul Morelli, the chair of the conference’s evangelism committee and certified lay minister. “General evangelists and conference evangelists have to raise their support,” he added.

Krieger did not anticipate that kind of conference support when she first discerned the call in 1992.

She initially envisioned serving God full time by setting up a health care business that would enable the elderly to remain in their homes. She didn’t have enough clients.

Krieger was already portraying various women in the Bible at church gatherings — first Miriam and then Ruth. She knew giving up nursing would require her family to rely, at least initially, on her husband Jim’s pay as a machinist — essentially cutting their family’s income in half. At the time, they had a child in college and another close behind.

Still, her parents and husband joined her in believing this was God’s call. “My parents prayed for us and bought us groceries for a number of years,” Krieger said. Her mother, a seamstress, also sewed most of her costumes.

“Some Christmases came and went, and the best we could do was manage to keep our kids in school for another semester with loans.”

Invitations grew as more people saw her portrayals, though. In 2002, her husband joined her full-time on the road.

She performs at prisons, mother-daughter banquets, schools as well as church events. She has performed for various religious groups, including once at a Mormon meetinghouse.

“I’ll go anywhere as long as people know Jesus comes with me,” she said.

She also keeps coming up with new ways to share the gospel story. One of her newest characters is a completely fictional creation — Millie, the innkeeper’s wife. Through her, Krieger recounts Christ’s life from birth through after his resurrection. Think of her as a sort of feminine and more humorous Ben-Hur.

Like most evangelists, Krieger has set up a nonprofit with a board to oversee finances. She estimates about half of her financial support now comes from donors and the rest from honorariums or church love offerings.

When she was first starting out, she asked churches to give whatever they wanted and would sometimes receive as little as $30 — not even enough to cover her travel expenses. Today, when a host declines to hold a love offering, her board requires a minimum $250 honorarium. 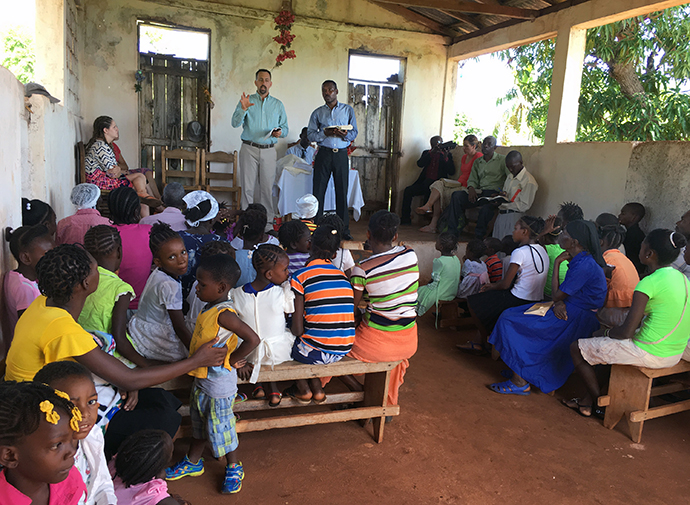 The Rev. Matt Henson (standing, left, in green shirt) speaks in a church in Sobier, Haiti. Henson, president of National Association of United Methodist Evangelists, hopes to increase awareness of the association and in turn help the church connect new people with the “old, old story.” Photo courtesy of The Rev. Matt Henson.

Evangelists played a significant role in Methodism’s spread starting with the circuit riders who galloped across the American frontier.

As institutional support has waned, so have the numbers of U.S. evangelists. Many find ministry work overseas.

Still, Garrott hopes to reclaim the importance of evangelism in the denomination. He is a consultant type of evangelist, leading Glen Eagle Resources, a nonprofit. He and those in his network provide leadership development in both church and secular settings.

He perceives a renewed receptiveness to evangelism in the United States. “The whole nature of evangelism has changed,” he said. “The old-time revival is fading quickly as an effective vehicle for reaching people. However, people are spiritually open now in a way they haven’t been in a long, long time,” he said.

“But it doesn’t matter where you are, you can talk to people about Christ,” he added.

Both Garrott and Krieger are officers in the National Association of United Methodist Evangelists.

The Rev. Matt Henson, the association’s president, hopes to raise the group’s profile and in turn help The United Methodist Church connect new people with the old, old story.

“One of our desires really is to be more engaged with the general church,” said Henson, who at 42 is among the younger association members.

Krieger is 68 and hopes to pass the mantle of her ministry onto another layperson. Even when she steps aside, she expects people will still need evangelism that comes with a theatrical flair.

“The whole picture of evangelism is we have to present the gospel story in a way that is relevant to today,” she said. “If you can draw them to be entertained, you can tell them the story at the same time.”

Read the first story in our two-part series on evangelism, Evangelists seek to revitalize churches.

Portland, the host of the 2016 General Conference, is on the leading edge of finding new ways to do church for people who do not like church.
General Church

United Methodist growth worldwide comes even as the U.S. continues to see its membership and worship attendance slide.

United Methodist Harry Denman Award winners show that sharing the good news doesn’t have to be scary or intrusive.