The Rev. John and Christine Zimmerman are modern-day circuit riders. Instead of riding a horse, they rely on the horsepower of their Bighorn RV.

For the past five years, the former church pastor and school reading specialist have made their living as traveling United Methodist evangelists — mostly in their home Western Pennsylvania Conference.

Their goal: Get churches out of their buildings and engaged in their communities with the transforming love of Christ.

To help United Methodist congregations “go,” the Zimmermans stay a while. They move their RV into a church’s area for three to five months. They preach a sermon series, teach Bible studies and mentor or birth the church’s mission outreach team. They also connect church leaders with other community groups and discern ministry opportunities.

The Zimmermans’ ministry — About Face Church Outreach Consultants — helps put a face on the work of today’s full-time United Methodist evangelists at a time when revivals are no longer routine for many U.S. congregations.

The numbers of professional evangelists are few, and their ministries can look very different from that of their forebears on the sawdust trail. However, these evangelists assert they can help make new disciples in a denomination that has long struggled with sliding U.S. membership.

“In the everyday grind of the local church, it’s easy to get bogged down and overwhelmed by preparing worship every Sunday and preaching and visiting,” she said.

“The point of the local church in the first place is to think about who is not there and think about Kingdom work. To have folks who have that passion to serve as a reminder, I think is really important.”

Her office sets the standards under which United Methodist evangelists operate and helps conference leaders when they get questions from people discerning a call to evangelism.

Conference boards of ordained ministries generally are responsible for approving evangelists. General evangelist is the denomination’s designation for elders who accept that call. Laypeople are called associate evangelists.

No denominational group has an exact count of United Methodist evangelists.

The National Association of United Methodist Evangelists lists some 300 U.S. evangelists on its website. However, most are retired or no longer active, said the Rev. Matt Henson, the association’s president and an evangelist based out of the Illinois Great Rivers Conference.

He estimates the association regularly hears from about 30 to 40 active members. Many, like the Zimmermans, act as church consultants. Others, like Henson, describe themselves as “proclamation evangelists,” meaning their ministry still largely involves testifying to the good news in revivals or similar settings.

The two started rethinking their ministry after Christine befriended a young mother of four who was struggling with drug addiction. The pastor’s wife invited the mother to the church’s Celebrate Recovery ministry. “Our life in ministry since that time has never been the same,” she said.

John visited the family and comforted one young daughter by singing, “Jesus Loves Me.” He remembered thinking it was likely the first time the little girl had ever heard the name “Jesus.”

“After that experience, I go back to the church,” he said. “I am looking around, and we’re just struggling so hard to get people to come to church. I was struck at how easy it was for the church to go to people. And we aren’t doing that.”

The Holy Spirit, he said, pricked their hearts. Over the next two years, they left their parsonage, sold many of their possessions and moved into their RV. They first worked to help the Corry congregation engage its community and then moved onto full-time evangelism throughout their conference. 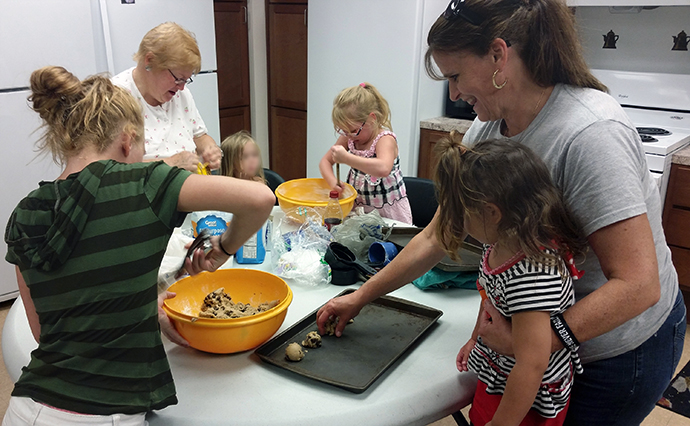 Christine Zimmerman, far right, joins with families from First United Methodist Church in Greensburg, Pa., to bake cookies for a nearby homeless shelter. Members of the church’s mission team still speak of how the Zimmermans helped ignite the church’s outreach to the community. Photo courtesy of the Zimmermans.

One of their first congregations was First United Methodist Church in Greensburg, Pennsylvania. The church stood across the street from a building that housed transitional living and two homeless shelters — one for families needing temporary assistance and another more long-term home for people dealing with mental illness.

Aside from occasionally bringing over food and other donations, the church had little connection to either shelter.

The Rev. Jill Croushore recalled that about 10 years ago, leaders found a man snoozing in a sleeping bag on the church’s front porch. A member cracked open the church door and threatened to call the police if the man didn’t move.

Croushore, a church lay member at the time, and a small group of other church members wanted to change that attitude. With the Zimmermans’ help, the church started a mission team.

Janet Craig, the mission team’s chair, came up with the name S.P.A.R.K., which stands for Sharing Passionate and Radical Kindness.

“The kindling that the Zimmermans added to our initial spark resulted in the hearts of our committee being set afire,” Craig said.

The team’s efforts include helping the church collect donations such as bags filled with toiletries and writing materials for residents just moving in and a moving ministry to help families transitioning into their own apartment or home. The church also routinely pays for birth certificates or photo IDs for people who have no form of identification and, therefore, cannot obtain any government services or assistance.

The church offers spiritual support that includes free Bibles, prayer with anyone who asks and assistance getting to worship. Some children at the shelter as well as grandchildren of residents now attend the church’s vacation Bible school each summer.

In the process, the church also has seen growth, Craig said, with individuals approaching the team with a desire to participate.

“It’s been a phenomenal change, and to use John’s (About Face) logo, it’s been a 180-degree turn,” said Croushore, who is now the congregation’s associate pastor and a second-year seminary student. “Now anyone can walk through the doors of the church. They are welcomed. They are looked after.”

The Zimmermans have inspired similar ministries at eight other churches and are now expanding into other conferences. They also are in early talks with Western Pennsylvania Conference leaders about finding ways to replicate their work.

Christine said a key to what she and her husband do is help United Methodists build relationships with the people around them.

“I think fear is one of the things that keeps churches trapped from not being able to venture out and share Jesus with others,” she said. “But I think that all of the churches we’ve been working with are finding that people are just people.”

Read the second story in our two-part series on evangelism, Evangelists aim to bring Bible to life.

Expert says truly sharing and living out the good news means developing relationships. “Are we friendly, or are we in the practice of making friends?”
Church Growth

Foundation for Evangelism gives major award to Kay Schecht for work with at-risk children and youth, including bringing them to church.