The Rev. Eugene H. Peterson wanted to get the words of the Bible into the heads and hearts of his Maryland congregants so that they would live its message.

One problem: The words had gone flat from familiarity. So the pastor went back to the Hebrew and Greek to do his own paraphrase, one that aimed to be both colloquial and free of cliché.

Peterson, who died Oct. 22 at 85, is probably best known for the resulting work, The Message: The Bible in Contemporary Language. He also penned more than 30 other books that have influenced Christians well beyond his home Presbyterian Church (USA).

“He has been pastoring people like me from afar,” said the Rev. Justin Coleman, who is among Peterson’s many United Methodist admirers. 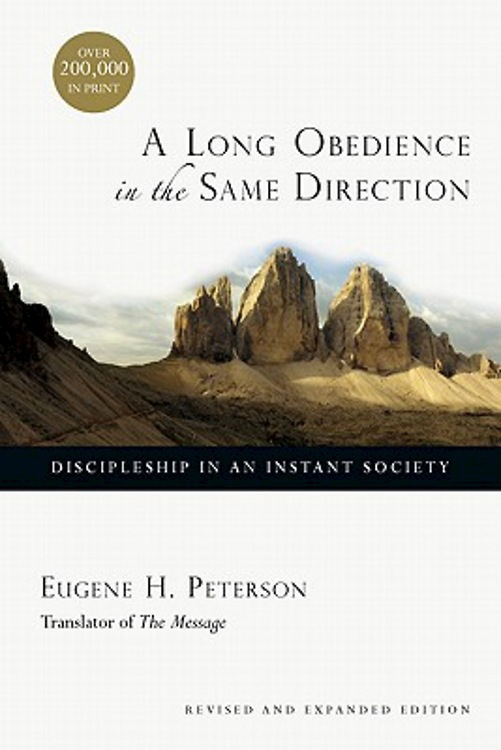 “A Long Obedience in the Same Direction: Discipleship in an Instant Society” artwork courtesy of Cokesbury.com.

Coleman, senior pastor of University United Methodist Church in Chapel Hill, North Carolina, routinely uses The Message among other Bible translations in sermon preparation. He also has taken inspiration from Peterson’s books such as “The Pastor: A Memoir” and “A Long Obedience in the Same Direction,” a book about Christian discipleship.

In fact, Coleman said, “A Long Obedience in the Same Direction” would be a fitting title for Peterson’s eulogy.

“Fundamentally, what Eugene Peterson has taught me is that’s the walk of discipleship and the walk of a pastor,” he said.

Peterson, born in 1932 in Washington and reared in Montana, initially began his vocation as both a scholar and a pastor. He was a professor of biblical languages at New York Theological Seminary while concurrently serving as an associate pastor in White Plains.

In 1962, he organized Christ Our King Presbyterian Church in Bel Air, Maryland, where he served as pastor for 29 years before retiring in 1991. Two years later, he became professor of spiritual theology at Regent College in Vancouver, British Columbia, before retiring again in 2006 to Montana. Neither retirement slowed his writing. His 90-day devotional “Every Step an Arrival” just came out on Oct. 2.

It was while serving as Christ Our King’s pastor that Peterson sought to make Galatians more accessible to a Bible class. John Stine, an editor at NavPress, saw Peterson’s treatment and encouraged him to continue the work that eventually led to The Message, published in 2002.

Throughout the process, Peterson told Christianity Today in 2002, he was thinking of his congregation.

“I didn’t want to be cute; I didn’t want to just get people’s attention,” he told the magazine. “So I was always working very closely with those Greek and Hebrew texts, trying to get underneath them and get into them, and then let it come out as the kind of language that we’re using.”

A paraphrase, explains the United Methodist Publishing House, has the primary goal of putting the Bible in current language without regard for being a word-for-word or even thought-for-thought match with the original languages. In some passages, paraphrases contain more words — not less. While Peterson drew on the early texts, he was very clear that The Message is a paraphrase.

Many English translations, from the King James to the Common English Bible, are the work of committees that will debate the exact meaning of a word or phrase. The Message very much results from the deliberations of an individual.

“I think the benefit of Peterson, putting him next to committee-produced translations, is to remind everyone that translation is not a science, that it’s an art,” Denise Dombkowski Hopkins said. She is the Woodrow W. and Mildred B. Miller Professor of Biblical Theology at United Methodist Wesley Theological Seminary in Washington.

She advises students to use standard translations in worship but welcomes them, when preaching about a particular verse, to cite Peterson in their sermons. Nine out of 10 times, she said, he nailed it.

Translators have choices in how they interpret a particular word, she said.

The Rev. Don Underwood, senior pastor of Christ United Methodist Church in Plano, Texas, said that has been his experience.

“Peterson managed to bridge the cultural divide between the time of Jesus and our own by translating into an idiom that is contemporary, dynamic and relevant,” he said.

Here is one example.

Many Christians can recite, without thinking, the King James Version of John 1:14: “And the Word was made flesh, and dwelt among us.”

For people who typically just nod along to words like dwelt, The Message offers this: “The Word became flesh and blood, and moved into the neighborhood.” 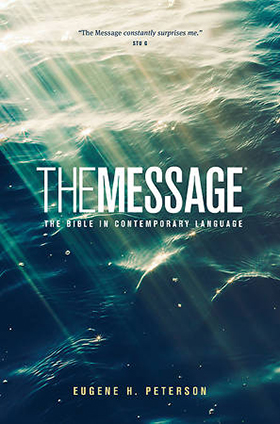 “The Message: The Bible in Contemporary Language” artwork courtesy of Cokesbury.com.

The Rev. Jeffrey Campbell, who first encountered The Message as a youth pastor, says this is his favorite verse in the paraphrase.

“This is essentially what Peterson was trying to do with his translation, help God’s Word become incarnational and accessible for the present and future generations,” said Campbell, who now is executive director of conference relationships at United Methodist Discipleship Ministries.

“This incarnational quality of The Message is at the heart of what most Methodists seek: ‘How do I live out this faith in my neighborhood in ways that embody the love of Christ?’”

Bishop Bruce R. Ough, former Council of Bishops president, from time to time cites The Message in his messages to congregations.

"The Message, Eugene Peterson’s poetic, insightful, at times jarring paraphrase of the Scriptures, has always awakened me to the inversions at the core of the Gospel message. The last shall be first. The meek will inherit the earth," said Ough, who leads the Dakotas and Minnesota conferences. "The Message almost always causes me to look at the Scriptures from an inverted position, often revealing a new truth or a deeper level of truth.”

The Message has sold more than 20 million copies over multiple editions and has attracted some famous fans. Bono, the frontman for U2, wrote the foreword to a special daily reading edition The Message 100.

The Rev. Anna Petrin, assistant professor of worship and chapel elder at Wesley Theological Seminary, said she is young enough that she can’t remember a time before The Message was among the scriptural references pastors use.

“That’s really how important it has been in the life of the church,” she said.

But beyond The Message, a number of Peterson’s books have become seminary staples.

As a student at United Methodist Duke Divinity School, Petrin read Peterson’s “Eat This Book.” “It refers to the scroll that the prophet (Ezekiel) eats," she said. "When we receive Scripture and pray and let it into our hearts, we consume it and it consumes us."

Today, she uses his book on Revelation and prayer, “Reversed Thunder,” for her classes on worship.

Dombkowski Hopkins said Peterson left the kind of legacy hoped for by most biblical scholars.

“I think he devoted his whole life to ensuring that the Bible remained the living word of God rather than an object,” she said. “The Bible in Eugene Peterson’s eyes was always a source of revelation, of transformation and of life.”

United Methodists of varying views remember the Rev. Junius B. Dotson as a leader committed to Christ and a protocol negotiator hopeful about the church’s future.