Beth Bingham began to see Hagar of the Old Testament in a new way after studying The CEB Women’s Bible.

Suddenly she wasn’t just the servant who bore Abraham a child when his wife Sarah couldn’t. She was, essentially, the Bible’s first single mom — one who had to leave the house because tensions were so high.

Bingham, a student at Virginia Theological Seminary, couldn’t wait to bring The CEB (Common English Bible) Women’s Bible and share her Hagar insight with the female inmates she studies Scripture with twice a month.

They were all over it.

“Many of them are single moms,” said Bingham, on track to become an Episcopal priest. “When I talked to them, it was like a light went on.”

The women who edited and wrote commentaries for The CEB Women’s Bible hope it will illuminate Scripture for lots of readers — women, of course, but also men.

“The idea is to be a door or a window opening into new thinking, new praying, new conversations,” said the Rev. Cynthia Weems, a district superintendent in The United Methodist Church’s Florida Conference, and one of the commentary writers. 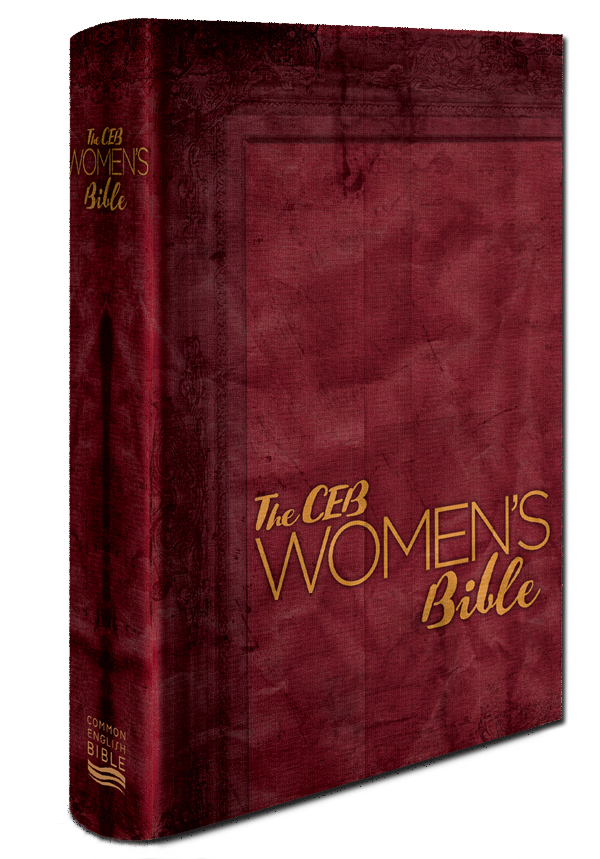 The CEB Women’s Bible is the latest specialty edition of the Common English Bible, which is sold and distributed by Abingdon Press, part of United Methodist Publishing House. Image courtesy of Abingdon Press. ​

The CEB Women’s Bible debuted last fall and is sold and distributed by Abingdon Press, part of United Methodist Publishing House. It’s the latest specialty edition of the Common English Bible, a collaborative effort by mainline Protestants to provide a contemporary translation strong on accuracy and readability.

The CEB Women’s Bible, like most others, offers Holy Land maps, introductions to the books of the Old and New Testaments, and footnotes. It also has a definite female emphasis.

There’s an index of all women mentioned in the Old Testament and New Testament, named and unnamed. There are biographical sketches of many of them — familiar figures, such as Mary and Naomi, but also Merab, Junia and even Mephibosheth’s nurse.

All five editors are women, as are all 80 of the commentary contributors. The team includes mainly seminary professors and pastors, but also Christian novelists and a rabbi.

“I think the vast, inclusive number of women’s voices that we have represented in the writings is beautiful and wonderful,” said the Rev. Ginger Gaines-Cirelli, senior pastor of Foundry United Methodist Church in Washington and one of the five editors.

This is not the first women’s Bible, but others have been from a conservative evangelical point of view.

Market research showed few women in mainline Protestant churches owned such a Bible, but many would want one that dug into how scripture relates to social justice and other key topics, said Sonua Bohannon, marketing manager for Abingdon Press.

Still, some of The CEB Women’s Bible editors hesitated to get involved.

“I prayed long and hard about it,” said the Rev. Jaime Clark-Soles, professor of New Testament at United Methodist-affiliated Perkins School of Theology (part of Southern Methodist University) and an American Baptist minister.

Clark-Soles worried that such a project could suggest there’s a certain, limited point of view or set of concerns for women.

She was won over by the commitment to a range of voices — a “community of thought” in the words of the Rev. Rachel Baughman, a United Methodist pastor and another of the editors — and by research showing women wanted such a resource.

“I had my own little come-to-Jesus moment and said, `OK,’” Clark-Soles said.

The Rev. Lisa Greenwood, vice president of leadership ministry at the Texas Methodist Foundation, is among the contributors recruited by the editors.

She felt pressure when asked to do a sidebar commentary to go with First Corinthians 13 – “Love is patient, love is kind…”

“When you’re working with First Corinthians 13, which has been used in half the weddings in the world, you’re like, `Is there really anything fresh to say?’” said Greenwood.

But she persevered, pointing out that the Apostle Paul, in writing to the troubled Corinthians, was saying that faith in God is expressed by loving each other, and that “living as a believer is possible only in the context of a community.”

Greenwood faced another challenge with her commentary – a limit of about 200 words.

“You’ve got to be really concise and wordsmith like crazy,” she said.

While Abingdon does not share sales figures, Bohannon said The CEB Women’s Bible is off to a strong start, aided by innovative marketing techniques such as soliciting reviews on the RevGalBlogPals website.

Some men are emerging as fans, including the Rev. Ron Foster, pastor of Severna Park (Maryland) United Methodist Church.

Foster praised the “seed-planting quality” of the Bible’s commentaries, including one titled “Control.” Written by the Rev. Sharon Ann Alexander, rector at Trinity Episcopal Church in Baton Rouge, Louisiana, it reflects on the First Corinthians passage where Paul says women should stay silent in church.

“It doesn’t take it on in an angry way, but it looks at this bigger issue of what Paul is trying to do and asks, ʽHow much control do we really want in the church?’ ” Foster said.

The Rev. Judy Fentress-Williams, professor of Old Testament at Virginia Theological Seminary and one of the five editors, said she was confident that The CEB Women’s Bible would offer a lot to men.

But when asked why she wanted to be part of the project, Fentress-Williams issued a rapid-fire response:

“I have a daughter.”