The Methodist movement first grew through small groups where people met to talk about their faith.

The group is urging fellow delegates and other United Methodists to use the unprecedented pandemic-caused postponement of the denomination’s top lawmaking assembly to hold prayerful conversations in their churches about the denomination’s future.

The group has released a statement “Out of Chaos, Creation: Seeds of a Vision for a Renewed United Methodism.” At two webinars July 7, group members discussed their statement and invited others to seek a “Spirit-inspired vision” for The United Methodist Church.

One thing group members wanted to make clear is that they are not another church caucus trying to advance a specific piece of legislation.

“What we are wondering is: How do you get at those real deep challenges that The United Methodist Church faces that can’t be solved just with legislation?” the Rev. Kennetha Bigham-Tsai, a Michigan Conference delegate, said in the afternoon webinar.

“How do you open up conversations that allow other voices to participate that aren’t just about being for or against something?” 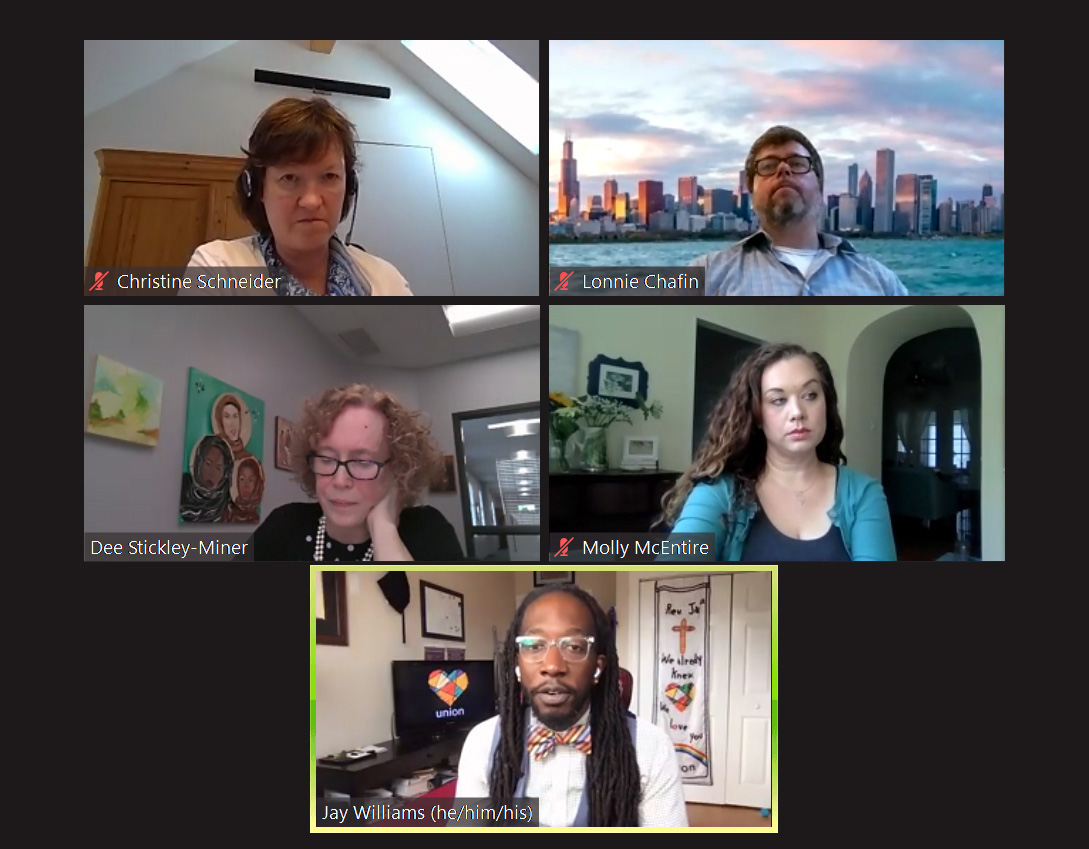 An informal group of General Conference delegates lead a webinar July 7 to encourage conversations ahead of the lawmaking assembly, postponed until 2021 because of the coronavirus pandemic. The international group has put together a statement “Out of Chaos… Creation” to encourage church members to use the delay to dialogue and listen to the Holy Spirit. Screen shot of ZOOM meeting by UM News.

The disruption of COVID-19 has led General Conference organizers to reschedule the event from May this year to Aug. 29-Sept. 7, 2021.

“If we have this 17-month delay between May 2020 and the September ’21 conference, can we be good stewards of this time?” asked the Rev. Jay Williams, a New England Conference delegate.

Specifically, he said he and other group members want to use this time to promote conversations that are “churchwide, cross-conference, inter-generational, multicultural, cross-context.”

To that end, the group also has provided a study guide in English, French, Spanish, and German for conversations among three to 10 people. Given the reality of COVID-19, the group encourages people to use their best judgment about whether to meet in person or online.

Each hour-long webinar included a time for lament, a discussion of the group’s statement and a half hour for questions and answers. The webinars drew a combined audience of about 195 people.

The group is urging conversation at a time when churches are contending with more than challenges brought on by the coronavirus. Many United Methodists around the globe are trying to address racial injustice and other human-rights concerns.

Meanwhile many also are bracing for a denominational split. The coming General Conference faces multiple proposals to resolve longtime debate around LGBTQ inclusion through separation. The Wesleyan Covenant Association is working toward forming a new traditionalist Methodist denomination and has drafted a new Book of Doctrines and Discipline.

Many of the delegates in the “Out of Chaos” group have asserted they want to remain with The United Methodist Church and some hold other leadership positions. Bigham-Tsai, for example, is the top executive of the Connectional Table, which coordinates the work of church agencies.

Many are also part of other groups advocating for the removal of church bans on same-sex weddings and “self-avowed practicing” gay clergy.

During one webinar, the group faced the question from Ian Urriola, an Upper New York Conference delegate: “How is Out of Chaos different from other vaguely progressive caucuses/movements within the denomination?”

The Rev. Dee Stickley-Miner, a delegate from the West Ohio Conference, answered by saying that the group emerged from conversations among people around the globe without a legislative agenda.

“It started with this wondering about what would happen if we really spent this time in conversations around vision and mission,” she said.

The group of 15 is mainly from the United States but also includes participants from Congo, Liberia, Germany, Switzerland as well as two from the Philippines.

What they all hope to avoid is General Conference becoming a battlefield, as many described the 2019 special called session. That legislative gathering — called specifically to address church policies around homosexuality — passed a plan by a 438-384 vote that strengthens the church bans related to LGBTQ weddings and gay clergy.

The contentious debate and relatively narrow vote left many delegates and observers feeling emotionally battered, and the bans faced increasing public resistance. In some ways, the gathering set the stage for the current separation plans.

The delegates behind the Out of Chaos statement have a website, where they plan to post the July 7 webinars.

“This initiative ‘Out of Chaos’ is one attempt to move beyond the structures because the structures are sometimes acting like breaks; they are hindering us from moving forward,” said Christine Schneider, a delegate from the Switzerland-France-North Africa Conference.

“We cannot go without the structures; we have them and at some point, we have to gather for General Conference. But in the meantime, I believe that conversations like this one is helping the church to move forward.”

The 2012 General Conference included time for what were intended to be holy conversations but left LGBTQ individuals and their allies reporting incidents of bullying. In 2016, General Conference — after three days of debate — ultimately rejected a possible rule change that would have used small groups for dealing with particularly complicated and contentious legislation, namely proposals related to homosexuality.

What the “Out of Chaos” group proposes is different. They envision conversations taking place well before General Conference and involving people who will not be at the gathering. The group’s study guide for these conversations makes no mention of the church debate around LGBTQ status.

Emily Allen, a delegate from the California-Nevada Conference, stressed that delegates need to listen to the ideas and hopes of fellow United Methodists. She noted that conferences elect delegates to serve not just during the 10-day legislative gathering but for four years.

“There is no excuse to walk into the GC session unprepared and unaware of the many voices in our church,” she said.

The Rev. Cristine “Tintin” Carnate-Atrero, a reserve delegate from the West Middle Philippines Conference, ended each webinar with a pre-recorded testimony to what she would like to see in the church she loves.

“I hope for the future of The United Methodist Church a living hope that all lost opportunities shall be recovered,” she said. “We have the perfect time now to decide for the rebirth of the church.”