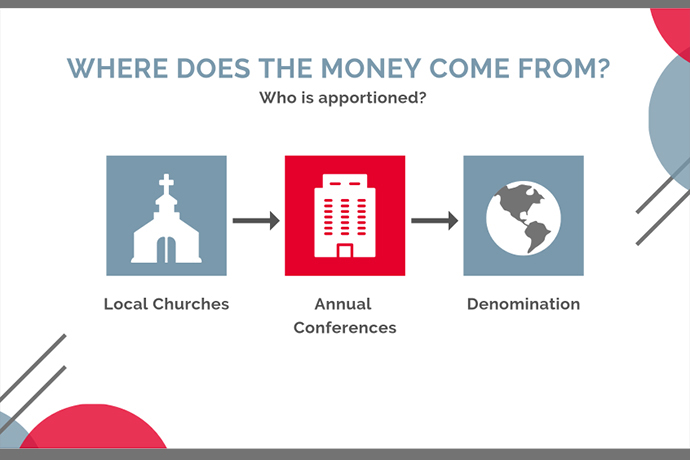 A graphic depicts how giving flows from local churches to annual conferences to the denomination-wide ministries of the global United Methodist Church. In a time of mounting church disaffiliations, the denomination’s financial leaders are trying to develop a church-wide budget that keeps in mind needs at all levels of the denomination. Graphic courtesy of the Connectional Table.

Steep cuts are coming to the 2025-2028 budget that supports The United Methodist Church’s denomination-wide ministries.

The question remains just how significant those cuts should be as the denomination deals with mounting church disaffiliations.

Back-to-back online meetings of the Connectional Table on Oct. 27 and the General Council on Finance and Administration board on Oct. 28 indicate that disagreements are brewing on how best to financially sustain ministry at all levels of the denomination.

“We recognize that the setting of budgets is not just about numbers,” said the Rev. Kennetha Bigham-Tsai, the Connectional Table’s chief connectional ministries officer, during the leadership body’s meeting. The Connectional Table is a 65-member board of lay and clergy that coordinates the denomination’s mission and ministry, including general agency work.

“Now often what we hear in these conversations is about keeping funds at the local church level, and that is vitally important. But again, we have some decisions to make. Do we value connectional ministry?”

At this point, the Connectional Table budget advisory team members and their counterparts on the General Council on Finance and Administration board are not seeing eye to eye.

At issue is the proposed four-year budget that will go before General Conference, the denomination’s top legislative assembly, which is scheduled for 2024. The budget supports connectional ministries that individual churches and even annual conferences can’t do on their own.

Based on surveys of annual conference leaders, the General Council on Finance and Administration is projecting that because of church disaffiliations and closures, there will be at least a 21.3% drop in total local church net expenditures by 2025.

Since 2019, the General Council on Finance and Administration reports that roughly 1,030 churches have disaffiliated or been discontinued because of a lack of financial sustainability. That’s still a fraction of the more than 30,500 United Methodist churches in the U.S.

In addition to shrinking net expenditures, both the Connectional Table and the GCFA board expect to reduce the base percentage. But not everybody agrees by how much.

The Connectional Table passed a motion Oct. 27 recommending that the base percentage be reduced by 18%. Meanwhile, the Apportionment Sustainability Task Force, a GCFA-appointed group, recommended a 25% drop in 2018 and again this past July.

In reaffirming its recommendation, the task force said the reduced budget:

The Connectional Table noted that agencies already have been looking to collaborate more. Agencies also have reduced staff through layoffs or lack of replacements in recent years in anticipation of budget cuts.

The Rev. Jerry DeVine, a Connectional Table member and district superintendent in the Michigan Conference, is sympathetic to the needs on all sides.

“I will have probably six churches on just my district level disaffiliate, so I see the reductions as very tangible,” he said during the Connectional Table meeting. “The concern I have is that we don’t have the flexibility that a local church has in terms of changing its budget. We have to project out and if we ask for a reduced amount, and things are not as dire as we might anticipate, we have no capacity to expand that.”

At its Oct. 27 online meeting, the body approved a $60,000 World Service Contingency Fund grant to Gulfside Assembly, a United Methodist retreat and educational center in Waveland, Mississippi, that is celebrating its centennial next year.

The assembly, a United Methodist Heritage Landmark, initially served as a campground and resort for African American Methodists at a time when the church was still strictly segregated. In the ensuing years, it has continued to promote antiracism work as well as providing a place for spiritual renewal along the U.S. Gulf Coast.

The board of the General Council on Finance on Administration plans to meet Nov. 17-18 to set the size of the budget that will go before General Conference. And the recommendations of both the Connectional Table and sustainability task force will be part of the deliberations.

Under either recommendation, the denomination-wide budget will be dramatically smaller. The GCFA board used its Oct. 28 meeting mainly as an informational session in preparation for its decision-making in November.

Under the 18% reduction of the base percentage, the denomination-wide budget would be about $408.6 million over four years — a 32.4% drop from the budget passed by the 2016 General Conference.

Under the 25% reduction of the base percentage, the denomination-wide budget is slashed to $373.7 million — a reduction of more than 38%.

Connectional Table members are concerned that GCFA will shrink the financial pie so much that some smaller denomination-wide ministries will have too small a slice to last over four years.

“By 2029, we’ll be putting some agencies out of business it would seem, which is not a decision we are comfortable making without General Conference,” Dave Nuckols told the GCFA board. Nuckols is the Connectional Table’s treasurer and a member from the Minnesota Conference.

The Rev. Steve Wood chairs the GCFA board’s General Agency and Episcopal Matters committee, which will bring a budgetary recommendation for the full board to consider in November.

“I think, for all of us, it’s sobering, to see the (25%) reduction,” said Wood, senior pastor of Mt. Pisgah United Methodist Church in Johns Creek, Georgia.

“This is why we wanted to give you this information now,” Wood said. “So you can prayerfully discern as we move forward how you would like to proceed when we meet again in November.”

Wood and others on the GCFA board also expressed concern that the current budget means the Episcopal Fund will be taking an increasing proportion of funding from other ministries. The present budget calls for 71 bishops — 46 in the U.S., four in Europe, three in the Philippines, and five additional bishops to bring the total to 18 in Africa.

North Texas Conference Bishop Mike McKee, GCFA board president, sent a letter to leaders of the the denomination's jurisdictional conferences, which elect U.S. bishops, saying that without reductions in the Episcopal Fund, the other six general church funds stand to be reduced by 50%.

This week, the five jurisdictional conferences have plans to elect 14 new bishops to succeed retiring bishops. That will bring the total number of U.S. bishops up to 40 — fewer than the 46 that GCFA currently assumes in the 2025-2028 denominational budget.

After the GCFA board sets the size of the financial pie in November, it will then be up to the finance-agency board and Connectional Table to determine how that pie is to be sliced among seven general-church funds.

The Connectional Table is responsible for recommending allocations for the bulk of the funds, which support Africa University, the Black College Fund, ministerial education, ecumenical work and World Service Fund that supports most of the denomination’s programmatic agencies.

Ultimately, action on the recommendations from both the GCFA board and Connectional Table will be in the hands of General Conference.

“This is fundamentally a question about identity,” Bigham-Tsai told the Connectional Table. “Those of us who have been looking at that believe that those who are staying within The United Methodist Church are committed to our identity as a connectional church.”

United Methodist leaders agree that big changes are coming as the denomination grapples with rising church disaffiliations. But disagreements remain on how best to balance financial uncertainty with missional commitments.
General Agencies

United Methodist general agencies are developing their spending plans for the year ahead. The ongoing fallout of COVID, high inflation rates and rising church disaffiliations are affecting finances across the denomination.
General Agencies