The COVID-19 crisis has delayed aid to Cyclone Idai survivors in Zimbabwe, Mozambique and Malawi, but The United Methodist Church remains committed to assisting those in need.

“The church remains the only source of hope for vulnerable communities affected by the cyclone and it continues to offer both spiritual and material support,” said Morgan Jeranyama, a humanitarian relief consultant who was hired by the church in Zimbabwe to oversee aid to cyclone survivors in the region.

The global pandemic has shifted priorities away from those still reeling from the destructive 2019 cyclone that affected more than 2.2 million people in the three African countries, killing more than 1,000.

“They were devastated and they need rehabilitation, which is a process that demands continued support,” said the Rev. Alan Masimba Gurupira, administrative assistant to Zimbabwe Bishop Eben K. Nhiwatiwa.

According to World Vision, a Christian humanitarian organization, more than a year after the cyclone, 100,000 people remained in resettlement sites with only basic services.

Zimbabwe declared a national lockdown in March, which halted work on five homes The United Methodist Church is building for survivors in the Bikita Chirorwe and Musukutwa areas of Masvingo.

Jeranyama said the church remains resolute in assisting survivors of Cyclone Idai despite the pandemic. In a few weeks, families will move into their completed houses, which are now being roofed, he said, adding that some work continued during the lockdown but at a slower pace.

The Baltimore-Washington Conference contributed $50,000 toward the new infrastructure, and The United Methodist Church in Norway provided $9,000 to cover materials, labor costs and food for the community builders.

Charlie Moore, project coordinator for the Baltimore-Washington Conference and a team leader of the Zimbabwe Volunteers in Mission, said the funds were originally earmarked for a pastors’ school program but were redirected to Cyclone Idai aid.

He said the conference also contributed an additional $3,000 in funding to the Hanwa Mission for emergency relief in light of COVID-19 and recent malaria outbreaks.

“This funding will provide food for 90 families (450 people) for a month while the Masvingo project is in progress,” Moore said. 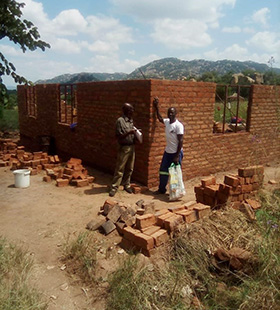 Engineer Cassian Mutsambiwa and builder Pamganai Ziwewe stand in front of the new four-bedroom home The United Methodist Church is building for Elizabeth Hwatira and her family in Bikita, Masvingo. The family’s home was destroyed by Cyclone Idai in 2019. Photo by Chenayi Kumuterera, UM News.

Elizabeth Hwatira, 35, a Cyclone Idai survivor, said she is grateful for The United Methodist Church’s help.

“We never expected anyone to look into our plight, as no one ever came to our assistance since disaster struck. Now, with this help, my family will have not just a roof but a beautiful and safe house to live in,” she said.

Martha Mupunga, another recipient of a new home, agreed.

“We never dreamt of having a good house to live in. We thank The United Methodist Church for extending their good hearts to us. My seven children will move into the new house before the next cold spell,” she said.

The Rev. George Mutimaamba, pastor in charge of the Chimanimani Chipinge District in the Zimbabwe East Conference, said many of the surviving church members in his district are still struggling with emotions in the wake of the deadly storms.

“As a pastor, I do visitations, do counseling and pray with all members, including Cyclone Idai survivors,” he said.

He noted the struggle of one couple whose son, an upper sixth-grader, went missing after the cyclone.

“(They are) in denial, express bitterness and continue to make prayer requests that one day they would meet their son Tatenda (again),” said Mutimaamba.

He said the boy’s father has developed mental health issues and can only sleep for two hours per day since the cyclone.

“Now, he is looking emaciated, absent-minded most of the time, at times confused and is currently receiving treatment at (United Methodist) Mutambara Mission Hospital. It’s a bit challenging because of movement restrictions, however, I call and text them occasionally,” he said.

While Mutimaamba is helping members with spiritual support, United Methodist Women from Melborne Central United Methodist Church in Australia, a Zimbabwe diaspora, are helping people in his region with supplies.

The women donated food hampers worth nearly $750 for widows and single mothers, orphans and vulnerable people who are struggling to survive because of the COVID-19 lockdowns.

“We came together and decided to help people back home with food hampers,” said Tapiwa Machingarufu, Melbourne UMC outreach coordinator.

“I could see food packs and teams coordinating sorting packs for the families. We really appreciate (this) kind of support,” said the Rev. Stephen Jeyacheya, Chimanimani Chipinge District superintendent.

In Mozambique, aid also has been slowed by the coronavirus, said disaster management coordinator Respeito Chirrinze.

He said additional grant applications have been submitted to the United Methodist Committee on Relief to continue to support survivors with food and shelter. Last year, the relief agency allocated three $10,000 grants for immediate, emergency short-term funding to meet basic human needs in Zimbabwe, Mozambique and Malawi.

“Pastors are trying their best, but it has not been easy to reach as many people as we did when we could gather in a worship service and administer any sort of response or support,” he said.

The Rev. Hortencia Americo, director of connectional ministries for Mozambique South Conference, agreed that the pandemic has set back efforts to help survivors.

“Social distancing has been a hurdle in our race to emotionally support Cyclone Idai survivors,” she said, adding that those who are isolated need emotional and spiritual support to heal.

“What is possible on our side is to make sure hope in these tough days is shared. We also convey to them God’s love, which continues and will continue unceasingly.”

Through its health department, the church distributed porridge to malnourished children and the infirmed and helps educate communities about COVID-19.

In partnership with United Methodist Church of the Resurrection in Leawood, Kansas, the conference also provided hand-washing supplies and personal protective equipment to survivors and health care workers to help stop the spread of the coronavirus.

The nearly $10,000 donation provided more than 1,000 hand-washing facilities (tapped buckets and basins), hand sanitizer and masks for villagers, and face shields and other supplies for local medical clinics.

“As a church we are responding to the government’s call for unity of purpose in the fight against the coronavirus disease pandemic,” said Maurice Solola, health assistant for the Malawi Provisional Conference.

Kumuterera is a communicator with the Zimbabwe West Conference. Joao Filimone Sambo in Mozambique and Francis Nkhoma in Malawi contributed to this report.