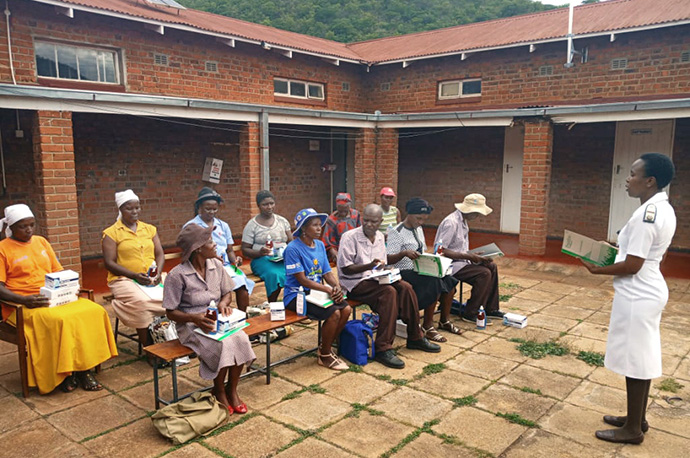 As nations work to stop the spread of the coronavirus, malaria control measures have been disrupted and cases have begun spiking in some regions, including Zimbabwe, where The United Methodist Church’s three mission hospitals report a sharp increase in malaria patients.

A new analysis published by the World Health Organization predicts that deaths caused by malaria in sub-Saharan Africa could jump to 769,000 in 2020 — twice the number of deaths reported in the region in 2018. That would be under the worst-case scenario of suspending all insecticide-treated net campaigns and a 75% reduction in access to effective antimalarial medicines.

The WHO statement said the numbers would “represent a return to malaria mortality levels last seen 20 years ago.”

Malaria is a preventable and treatable disease caused by parasites that are transmitted to people through bites from infected female Anopheles mosquitoes.

In Zimbabwe, 205 malaria deaths were recorded as of April 23 and more than 203,000 infections, according to Dr. Obadiah Moyo, Minister of Health and Child Care. During his keynote address on the eve of World Malaria Day on April 25, he said the numbers represent a 59.9% increase in cases and 86.6% spike in deaths over last year.

The coronavirus, meanwhile, has claimed four lives in Zimbabwe with at least 34 confirmed cases.

United Methodist health institutions in Zimbabwe are battling to contain both diseases.

Dr. Larry Tanyanyiwa, medical superintendent of United Methodist Nyadire Mission Hospital, said that in the midst of preparing to fight the COVID-19 pandemic, an alarming increase of malaria patients have come to the hospital.

“We have been in an outbreak of malaria since March and we have so many patients coming to the hospital. These include children under the age of 5 and even expecting mothers,” he said.

In 2018, more than two-thirds of all malaria deaths worldwide were children under the age of 5, according to WHO’s 2019 World Malaria Report.

Nyadire Mission is in the Mutoko District, where malaria cases have almost tripled compared to the previous two years, according to the Ministry of Health and Child Care. There have been 14,809 cases between January and April, compared to 5,817 and 4,756 during the same period in 2019 and in 2018, respectively, Tanyanyiwa reports.

Africa University is conducting a malaria vector surveillance program in partnership with the Zimbabwe government’s Ministry of Health and Child Care and the United States Agency for International Development under the President’s Malaria Initiative.

The program, which is running in collaboration with the government’s National Institute for Health Research and other partners, has set up a national reference insectary at Africa University which is nearing completion.

“The goal of the program is to examine and provide evidence of changes in mosquitoes which transmit malaria,” said professor Sungano Mharakurwa of the university’s College of Health, Agriculture and Natural Sciences.

“We have discovered mosquitoes are now invading new areas, such as highlands, which were previously malaria-free, and this could be where some of this year’s outbreak is coming from,” said Mharakurwa.

He said cases of malaria have resurfaced in areas like Mutasa District (where Old Mutare Mission and Africa University are located) partly because mosquitoes are changing their behavior and susceptibility to insecticides currently being used.

“We are now innovating interventions for malaria prevention, leveraging on our new reference insectary facility,” Mharakurwa said.
— Eveline Chikwanah
“People have been doing a lot of outdoor activities such as market gardening as a source of livelihood,” he said, adding that the district is intensifying its malaria control and will begin respraying hotspots soon.

At Nyadire Mission Hospital, the high number of admissions has been exacerbated by the surrounding clinics, which sometimes turn away patients due to the fear and stigma of COVID-19, Tanyanyiwa said.

“The signs and symptoms of the two diseases, which are separated by a thin line, have added to the scare,” he said. “At the hospital, we are not taking any chances; we are testing for both COVID-19 and malaria.”

However, he noted that the hospital is having trouble due to shortages of malaria medications and rapid diagnostic tests kits.

“Currently, we do not have any external assistance except from the government of Zimbabwe. As a faith-based institution, we are using the little we have and working around the clock to save lives,” he said.

“The church is working tirelessly in the fight to eradicate malaria. The church has been engaged in the Imagine No Malaria campaign, distributing mosquito nets (and) educational and awareness materials aimed at the prevention of malaria.”

The World Health Organization urged countries to ramp up mass vector control campaigns to fight malaria, while also ensuring that health workers and communities are protected against the coronavirus.

“A nationwide insecticide-treated bed-net distribution that was scheduled to take place this April did not happen because of coronavirus,” Norman said.
Facilities also are running low on malaria drugs and she fears the shortage will affect patients who can’t afford to pay.

The annual conference's Imagine No Malaria program coordinator, Prince Lamin-Boima, said malaria usually peaks during the rainy season in Sierra Leone, which is from May to October.

“With less or no malaria drugs in the facilities, we expect to see more malaria fatalities, especially among children in the approaching rainy season,” he said.

He said all malaria outreach programs across United Methodist health facilities in the country have been suspended. He also noted that it has been four years since the last nationwide net distribution, which replaces nets that may be worn out or ineffective.

“All of these (factors) put together are negatively going to affect the fight against malaria,” Lamin-Boima said.

Mohamed Khadar, the malaria contact person at United Methodist Mercy Hospital in Bo, Sierra Leone, has seen a drastic drop in the number of patients visiting the hospital.

“Patients fear coming to the hospital for fear of being told they are COVID-19 patients,” he said.

Lamin-Boima said at United Methodist Kissy Hospital in eastern Freetown, many patients discharged themselves after the first few COVID-19 cases were announced in early April.

Dr. Claude Watukalusu, director of Uvira United Methodist Hospital in Uvira, Congo, said recent flooding has led to poor living conditions in some areas and a rise in malaria cases.

He said the hospital has registered more than 200 malaria cases since April 25, most of whom are flood survivors housed with host families or staying at shelters in schools or churches.

The Imagine No Malaria program officer in Eastern Congo, Dr. Frederic Yemba, said 15 United Methodist health facilities receive malaria medication and mosquito nets as part of the program. However, during the pandemic lockdown, mosquito nets are only being distributed to pregnant women and children 5 years old and younger.

Pregnant women and young children are the most vulnerable.

Angela Macherechedze, sister in charge of the family and child health unit at United Methodist Old Mutare Mission Hospital in Zimbabwe, said malaria cuts across age, sex and status, but said it is especially hard on pregnant women and children who have compromised immune systems.

“The effects of malaria on pregnant mothers can cause miscarriages, intra-uterine deaths of the child or of the mother, or death of both, hence it is important to control it,” Macherechedze said.

She said the hospital is experiencing an influx of malaria patients and noted the similarities between the disease and COVID-19 symptoms.

“Both cases experience high temperatures, fever, general body weakness, chills, headaches and joint pains, making it very difficult to differentiate without doing laboratory tests. The only real difference is that the COVID-19 virus exhibits coughs and sneezing symptoms. We, therefore, continuously educate our village health workers on the salient features,” she said.

Christine Chidawanyika, a village health worker from Grange Farm, said she and her peers are able to test for and treat malaria in the field but refer complicated cases to health facilities.

Ivy Chikomba, who is six months pregnant, is one of those cases.

“When I sensed that I was not well, I shared the signs and symptoms … Because I am pregnant, (the health worker) advised me to visit (Old Mutare Mission Hospital) immediately, where I tested positive for malaria.”

Chikomba was treated and spent five days in recovery at the hospital.

“The clinic is overwhelmed because of an outbreak of malaria in the area and, so far, 653 people have tested positive for malaria from 1,172 suspected cases.”

She noted that the 20-bed clinic has a catchment area of about 7,500 people. Of the 653 who tested positive in March and April, 166 were under age 5, a number she said “is highly alarming.” “The last outbreak was in 2017. We thank God that this year we have not yet experienced any deaths.” 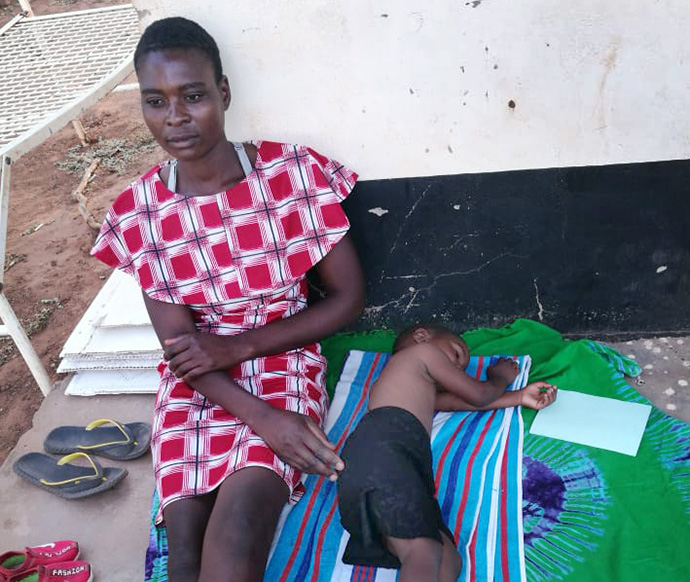 Martha Banda, 26, and daughter Priority Chimombe wait to go back home to Chaparapata Village after the 3-year-old was treated for malaria at Dindi United Methodist Clinic in the Murehwa Uzumba Maramba Pfungwe District in Zimbabwe. The clinic has been overwhelmed by an outbreak of malaria in the area. Photo by Kudzai Chingwe, UM News.
Mashoko said Dindi Clinic and 16 health workers within their villages are providing awareness, treatment and monitoring of malaria cases.

“When I realized that she was not well, I then used the skills which I was taught by the village health workers to confirm whether it was malaria,” Banda said.

“(The village health worker) could not give me coartemether tablets (a medicine for treating malaria), because my child was too young, but referred me to the clinic. The clinic confirmed that she had malaria, (she) was treated and is on her road to recovery,” Banda said.

“I am suspecting (she) got malaria infection at home, since I do not have mosquito nets or mosquito repellents,” Banda said. “I wish I could have both, but I cannot afford (them).”

“When you are also infected, the situation becomes dire.”

Dr. Emmanuel Mefor, a medical superintendent for United Methodist Mutambara Mission Hospital in Chimanimani Chipinge District, said he has noticed an increase in malaria cases in children under the age of 5 years.

“Currently, we are in a catch-22 situation because of limited resources to combat both outbreaks,” said Mefor. “We are trying our best to work with what we have and God will see us through.”

Chingwe is a communicator for the Zimbabwe East Conference. Communicators Phileas Jusu in Sierra Leone and Philippe Kituka Lolonga in the Congo contributed to this report.