A new court ruling gives a boost to continuing efforts by the Standing Rock Sioux Tribe and others to stop the Dakota Access Pipeline, say United Methodist supporters.

“People often think this has been over for some time, but it hasn’t been,” said the Rev. David Wilson, conference superintendent of the United Methodist Oklahoma Indian Missionary Conference, about the fight over the pipeline.

The U.S. District Court for the District of Columbia ruled July 6 that the Dakota Access Pipeline must shut down by Aug. 5 while an in-depth environmental review of the project is conducted.

Since 2016, there have been several court rulings regarding the pipeline’s route and its environmental impact. An executive order issued by President Donald Trump on Jan. 24, 2017, just after he took office, had allowed construction of the pipeline to proceed.

The Standing Rock Sioux Tribe, which includes members of the Lakota and Dakota nations, has fought against the $3.8 billion pipeline for years over concerns about polluted drinking water and the disturbance of sacred Native American sites.

That fight received sustained national attention in 2016 after the tribe rallied supporters to the cause by establishing a protest campsite area in North Dakota that became known to many simply as “Standing Rock.”

The struggle intensified in the summer of 2016, when additional protestors joined a Standing Rock protest camp near its reservation in North Dakota. Support came from the denomination’s Dakotas-Minnesota Area. In a blog post, Bishop Bruce R. Ough characterized the protest as “a spiritual battle” of the Lakota and Dakota people, “informed by the memory of broken treaties and disingenuous promises.”

Ough echoed that description in a July 8 interview with UM News about the new court ruling.

“This is a legal injunction or legal action that stops the use of the pipeline, so in some ways, it’s really a victory for the Standing Rock Sioux Tribe and other indigenous people,” he said.

But, he added, the ruling probably cannot address the fact that the tribe’s concern “is primarily a spiritual matter, a spiritual battle.” For the real healing to take place, he stressed, “the underlying work still needs to go on.”

For Ough, that means “respecting cultural and indigenous rights and caring for the water of all creation.”

In the Oklahoma Indian Missionary Conference, Wilson recalled, lay and clergy members were asking in 2016 how the conference was going to engage in this issue. Because of the historic division of reservations among denominations in the 1800s, the Standing Rock reservation has Episcopal and Catholic congregations but no United Methodist churches. When he reached out to an ecumenical contact at Standing Rock, a new relationship was born.

From July 2016 to January 2017, the conference scheduled monthly trips to the Standing Rock campsite, when many came to witness the protest. Dallas Parker, who often helps the conference with tech and social media projects, was one of the volunteers. “Our main goal was to provide support in any way that we could,” he said.

“We made a lot of friends from that area,” added the 28-year-old, who keeps in touch with Standing Rock friends through social media. “They always give us updates here and there about how things are going.”

Both Wilson and Parker were part of a group venturing to a bitterly cold camp area in January 2017 to deliver a load of winter coats donated by a Native American Center in Dallas. The next spring, Wilson took a group of students to the campsite to hear stories from those still there. 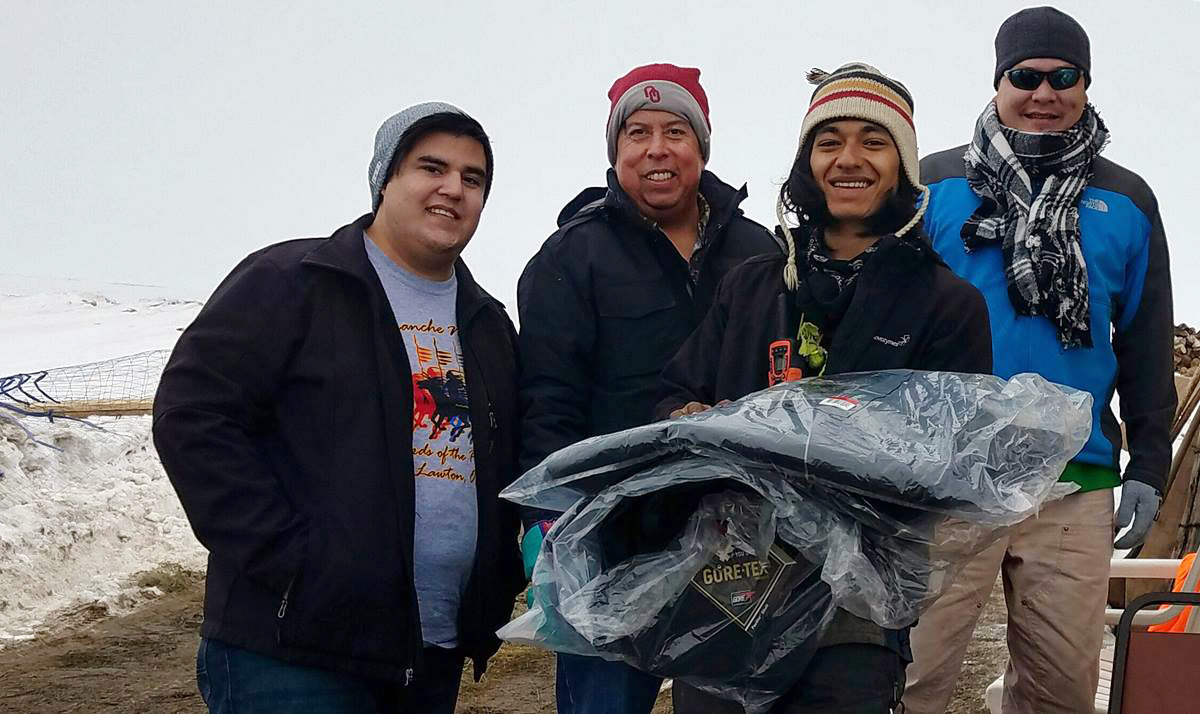 Dallas Parker, left, the Rev. David Wilson, second from left, and Tim Byington, right, present thermal coats to a camp volunteer at the Oceti Sakawin Camp at Standing Rock in Cannon Ball, N.D. in this 2017 file photo. The coats were donated by the Urban Inter-Tribal Center of Texas. File photo courtesy of Dallas Parker.

More recently, the Oklahoma Indian Missionary Conference delivered more than 4,000 school kits to 13 schools on the reservation. The conference has also provided assistance during the COVID-19 pandemic.

“That was part of our commitment … to say this is not a one-time thing for us,” Wilson said.

The commitment of the Lakota people to the environment, he pointed out, is for everyone. “This is an understanding of community and relationship,” Wilson explained. “Everything they do is for all of humanity.”

Wilson and Parker are overjoyed at the July 6 court ruling but take it with a grain of salt. “This is a great victory for the time being,” Parker said. “The fight is never over.”

Top executives of several United Methodist agencies who made their own visits to Standing Rock also hailed the ruling.

Thomas Kemper and other representatives of the Board of Global Ministries joined hundreds of church members from across the U.S. to participate in the Standing Rock protest.

“At that time, we also conducted a major public awareness effort on behalf of the Native American cause,” Kemper said. “Global Ministries takes seriously its solidarity with indigenous peoples. I am gratified that the federal court is listening to the Native American concerns about the Dakotas Access Pipeline.”

For the Rev. Susan Henry-Crowe, Board of Church and Society, the ruling signifies that “justice has been served” for the people of Standing Rock.

“As United Methodists, our church's social teachings remind us that too often we have turned native people’s sacred lands into dumping grounds,” she said. “Our call to repentance and healing led us to stand in solidarity with God's people and God's creation. This decision honors the tireless advocacy of the Standing Rock people working for this day.”

United Methodist Women also opposed the construction of the pipeline and a number of its members traveled to Standing Rock to be in solidarity with the demonstrators.

Her own visit there, said Harriett Olson, UMW’s chief executive officer, “made clear the importance of standing with Native Americans to address the risks of pipeline leaks and the treatment of Native American peoples throughout the entire project.

“We applaud this ruling and remain committed to honoring the position of Indigenous communities out of a deep belief that the pipeline threatened tribal sovereignty over the land and posed an environmental danger.”

Most United Methodist general agencies are committed to achieving net-zero greenhouse gas emissions by 2050, a goal announced on Earth Day.
Mission and Ministry

The making of Thanksgiving in the US

With this year marking the 400th anniversary of the Pilgrims’ arrival in North America, it’s worth revisiting the good — and the bad — of how the U.S. holiday developed.