The Rev. David Wilson, Oklahoma Indian Missionary Conference superintendent, had just arrived home from visiting the Oceti Sakawin Camp near Cannon Ball, North Dakota, this week when he heard that President Donald Trump had signed a series of executive orders that included the advancement of the Dakota Access Pipeline.

“There is great disappointment over President Trump’s executive order, which was made with no consultation with the tribe,” said Wilson, who had traveled with conference members to the campsite over the weekend to deliver 60 thermal coats donated by the Urban Inter-Tribal Center of Texas. The group also purchased food for one of the kitchens at the camp.

“Unfortunately, many of us are not surprised by the action. We know our work is far from over,” he said. 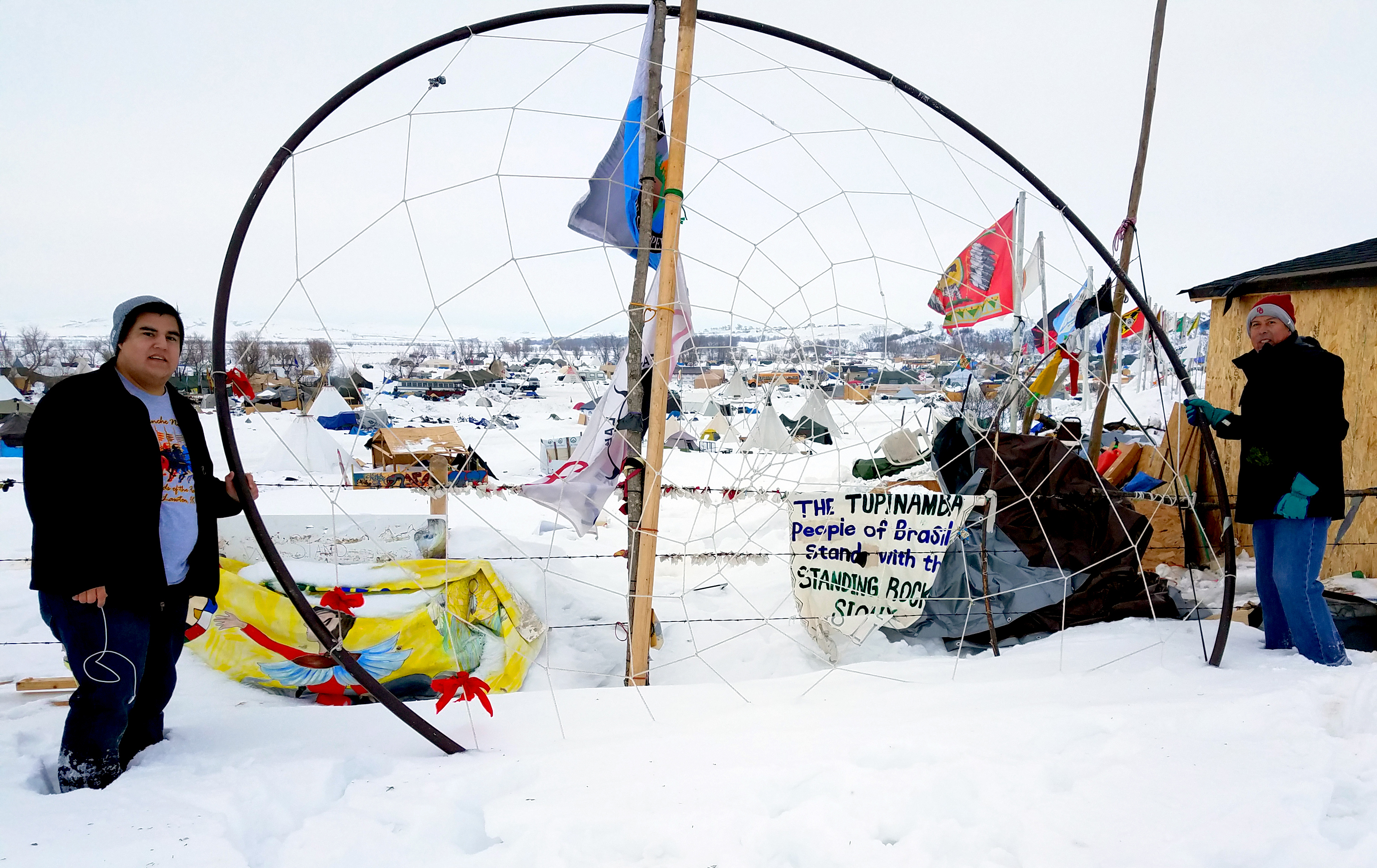 While at Standing Rock, the United Methodist group hung tobacco prayer ties on the dream catcher that is located at the entrance to the camp. From left are Dallas Parker and the Rev. David Wilson. Photo courtesy of Dallas Parker.

In a Jan. 24 press release, Standing Rock Sioux Tribal Chairman David Archambault II said the executive order violates the law and the tribe will take legal action to fight it.

“President Trump is legally required to honor our treaty rights and provide a fair and reasonable pipeline process,” Archambault said. “Americans know this pipeline was unfairly rerouted towards our nation and without our consent. The existing pipeline route risks infringing on our treaty rights, contaminating our water and the water of 17 million Americans downstream.”

Water protectors began camping near the construction in July after the Standing Rock Sioux Tribe took its first legal action to block the pipeline by filing a complaint against the U.S. Army Corps of Engineers over its permitting process.

The North Dakota Pipeline would carry a 500,000 barrels of oil daily from the Bakken oil fields in northwest North Dakota to Patoka, Illinois. The Standing Rock Sioux Tribe says the pipeline would not only threaten its water supply, but also pass through and destroy burial sites and sacred places.

Nearly 800 campers still occupy three campsites near the pipeline construction. The tribe is asking campers to leave because of concern about flooding from the river due to record snowfalls this winter.

“Many of the campers we spoke to say they are not going anywhere,” Wilson said.

The Oklahoma Indian Missionary Conference will continue to take donations to support the Standing Rock Sioux Tribe. In addition, the tribe is asking supporters to contact their congressional representatives and let them know that they do not stand behind President Trump’s decision.

“We are not opposed to energy independence. We are opposed to reckless and politically motivated development projects, like DAPL (Dakota Access Pipeline), that ignore our treaty rights and risk our water,” Archambault said.

Underwood is a communication consultant with ties to the Oklahoma Indian Missionary Conference.  She is a member of the Comanche Nation of Oklahoma.

An annual gathering celebrating Native American culture under the auspices of the Tennessee-Western Kentucky Conference draws Native and non-Native Americans for dance, art and contemplation of serious issues.
Local Church