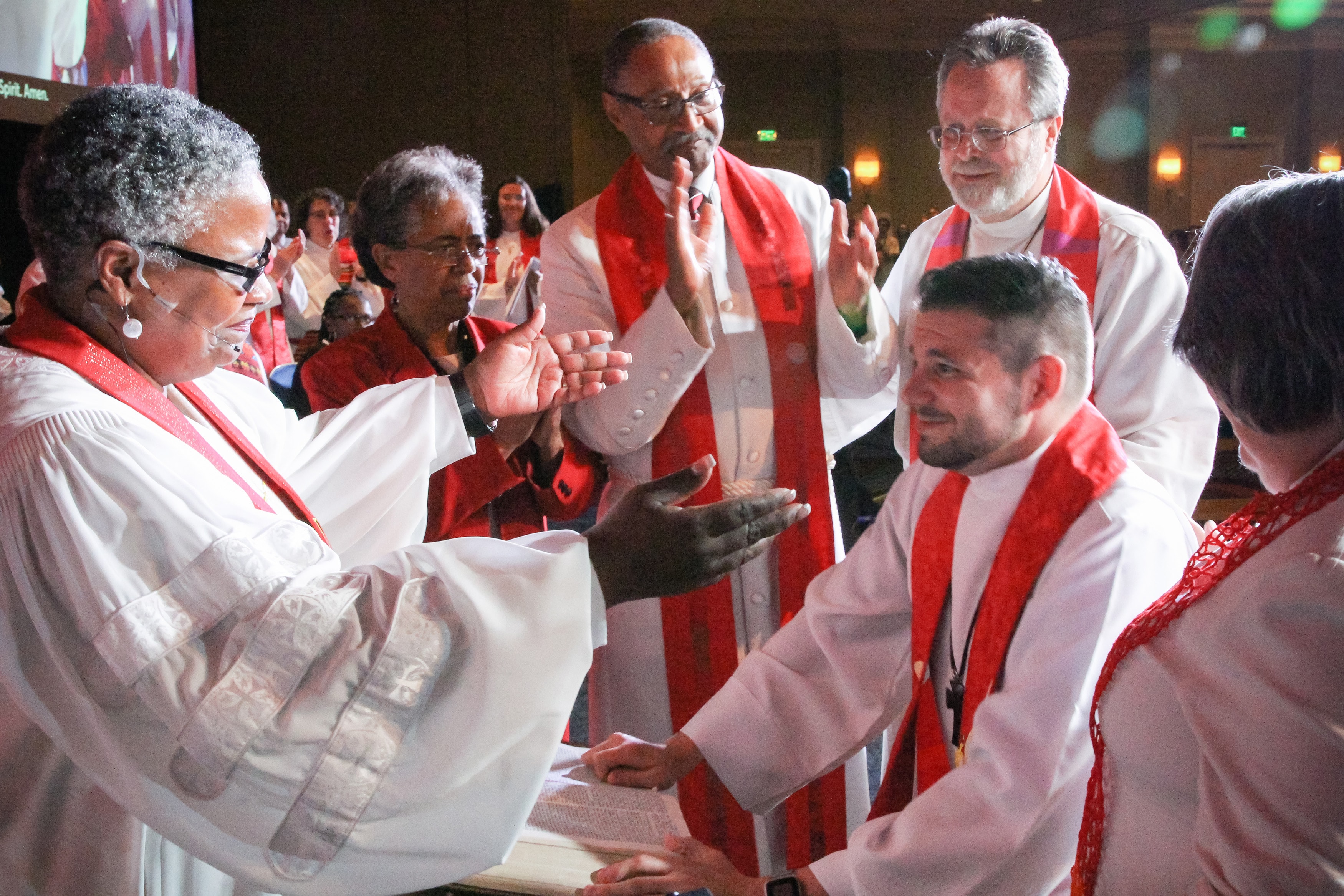 Bishop LaTrelle Easterling, left, greets the Rev. Joey Heath-Mason immediately after ordaining him as a full elder. Photo by Alison Burdett, Baltimore-Washington Conference.
Reaction by United Methodist regional bodies in the U.S. — as well as the Council of Bishops — to the Traditional Plan adopted by the 2019 General Conference dominates the fall agenda of the denomination’s top court.

The Judicial Council has an 18-item docket to consider when it meets Oct. 29-Nov. 1 in Evanston, Illinois. Aug. 19 is the deadline to submit briefs and make requests for oral hearings.

Two items are from the United Methodist Council of Bishops regarding questions about legislation passed at the 2019 General Conference in St. Louis.

The bishops are asking for a declaratory decision on “the constitutionality, meaning, application and effect of certain petitions adopted as the Traditional Plan,” specifically asking five questions about the effects of the plan “that need to be addressed for the benefit of The United Methodist Church.”

The bishops also requested a ruling from the Judicial Council about the effective date of a new paragraph in the Book of Discipline about the disaffiliation of local churches over issues related to human sexuality.

Eleven of the docket items are automatic reviews by the church court of decisions of law made by nine bishops during the 2019 annual conference season. Most of those also relate to the Traditional Plan. In addition, there are four requests for a decision by the top court directly from annual conference voters.

One bishop’s ruling is connected to a recent Judicial Council decision on her previous decision about the eligibility of two clergy candidates in the Baltimore-Washington Conference married to persons of the same gender.

The top court said Bishop LaTrelle Easterling overstepped her authority during the 2018 conference session by ruling that two individuals married to people of the same gender but approved by the conference's Board of Ordained Ministry were not eligible for ordination and commissioning.

In Decision 1368, the Judicial Council reversed part of her decision “since it violated the separation of powers by intruding on the responsibilities and rights of the clergy session.”

During the 2019 conference session, the Rev. Robert Barnes questioned the clergy session’s voting process to approve the commissioning and ordination of the same two candidates affected by Easterling’s previous decision.

The bishop ruled that the clergy elections on May 29 were properly handled. Two days later, Easterling commissioned Tara Cressler “TC” Morrow as a provisional deacon and ordained the Rev. Joey Heath-Mason as a full elder. Both Morrow and Heath-Mason are in same-sex marriages.

Several bishops ruled out of order resolutions that sought to withhold funds from the complaint process for clergy accused of violating church restrictions related to homosexuality.

A resolution of nonconformity with General Conference approved June 15 by the California-Pacific Conference was ruled “unconstitutional, null and void” by Bishop Grant Hagiya because it denies clergy the right to trial and appeal.

Bishop Karen Oliveto found three of eight action items on a Mountain Sky Conference petition called “All are Welcomed” to be “contrary to the Book of Discipline and out of order.” Those items include “refusing to comply with the strict requirements of the Traditional Plan,” not enforcing punitive and exclusionary policies” against gays and lesbians and their supporters and taking no disciplinary action against clergy who conduct same-sex unions.”

In two decisions of law from the Upper New York Conference, Bishop Mark Webb ruled that it was permissible to express disagreement with General Conference but not to restrict funding or “impose an immediate moratorium on any punitive action related to LGBTQ clergy and same-gender weddings.”

Bishop William T. McAlilly found a request for a decision of law about a resolution on inclusion in the Tennessee Conference to be moot and hypothetical.

Several rulings focused on the aspirational, non-binding nature of a resolution.

The Eastern Pennsylvania Conference, however, asked Judicial Council to decide whether the conference’s resolution considering itself to be a One Church Conference in spirit would be considered aspirational or legal.

The Alaska Conference wants to know whether the option of withdrawing from the denomination as an annual or missionary conference is provided for in the 2016 Book of Discipline or by previous Judicial Council decisions.

During the Alaska Annual Conference May 30-June 1, delegates discussed the conference’s call, gifts and mission; the realities it faces as a missionary conference and the “next expression” of Alaska Methodism. Conference voters considered two possible alternatives — become a mission district of another conference or withdraw from the denomination.

The Alaska Conference affirmed the four commitments from the UMC Next meeting at the Kansas City area United Methodist Church of the Resurrection in May, which includes a rejection of the Traditional Plan.

In other docket items, the Western Pennsylvania Conference asked for a declaratory decision on the principle of legality related to a conference’s administrative matters, the Desert Southwest Conference is asking Judicial Council to rule on possible violations of the separation of powers found in church law and Erik Seise is asking the court for a review of his administrative appeal.

Bloom is the assistant news editor for United Methodist News and is based in New York.

The United Methodist Church’s top court faces multiple questions related to the deadline for General Conference legislation and a new law allowing congregations to exit with property.
Mission and Ministry

As plans for denominational separation ramp up, bishops start their fall meeting focused on the continuing United Methodist Church and anti-racism work.