Supporters and opponents of Plan UMC agree on this: Any reorganization of United Methodist agencies ought to help more churches become vital and strengthen the denomination’s Christian witness.

Whether this plan can get the job done is in dispute.

General Conference, the global denomination’s top lawmaking body, will next convene May 10-20 in Portland, Oregon.

Back in 2012, nearly 60 percent of General Conference delegates voted for the previous version of Plan UMC. However, on the last day, the Judicial Council — the denomination’s top court — declared that plan violated The United Methodist Church’s constitution. Some of the plan’s proponents went back to the drawing board to try to address the constitutional concerns.

The Judicial Council announced Oct. 26 that it had deferred ruling on the constitutionality of the plan’s revised version until its meeting next May, just before the start of the 2016 General Conference. The court said “it would be an untimely intrusion” into the legislative process to rule on one organizational plan when there might be other proposed plans facing constitutional questions. The decision essentially invited the Council of Bishops to refer any other such plans for constitutional assessment as well.

Beyond the question of constitutionality is that of effectiveness. Does the plan meet its goal of aligning denominational resources to foster vital local churches?

“I’m for any plan that would focus the energy of the denomination toward the local church,” said the Rev. Clayton Oliphint, who submitted the legislation. The senior pastor of First United Methodist Church in Richardson, Texas, said he sees in the revised plan the potential to do just that.

“I would hope the agencies exist to support the work of the local church and not the other way around,” he added.

What the plan changes

Proponents of the revised plan emphasize that they do not see the proposed legislation as the only solution necessary for fostering vitality and reversing decades of declining U.S. membership. But they argue the plan would be a critical step in the right direction. 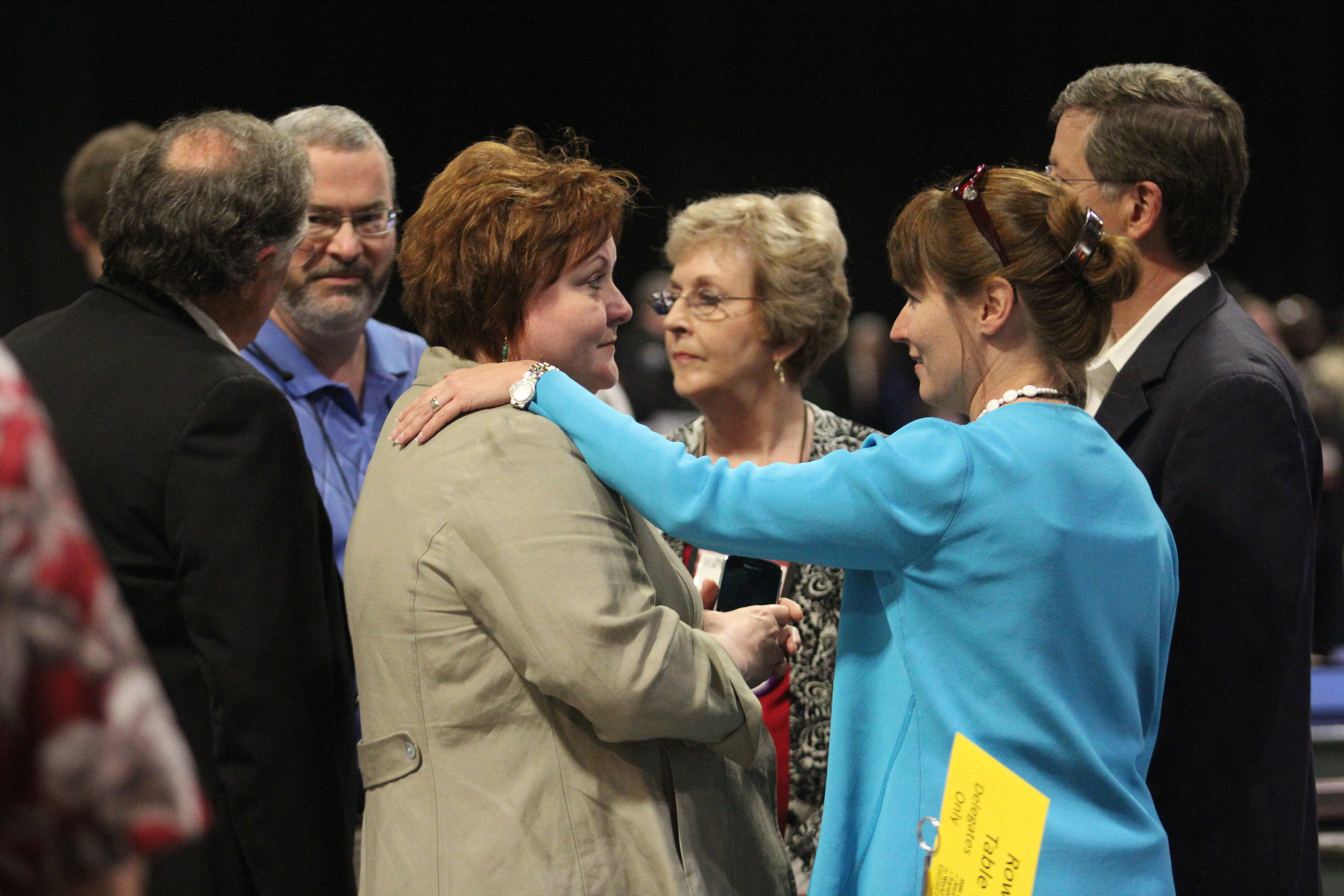 Delegates from the Memphis and Tennessee conferences (from left) David Reed, the Rev. Sky McCracken, Selena Henson, Sandra Burnett, the Rev. Harriett Bryan and the Rev. Randy Cooper, confer with each other at the May 4 plenary of the 2012 United Methodist General Conference in Tampa, Fla. A 2012 file photo by Kathleen Barry, UMNS

Brooks said the plan redirects financial resources to local churches by decreasing the number of agencies and strengthening the Connectional Table’s authority to reduce duplications of efforts among various agencies. He said the changes mean fewer agency executive salaries and fewer staff members at multiple agencies engaged in similar tasks.

The plan’s supporters include more than the individuals who developed it.

“Continuing to do things the way we have been doing them will continue to produce the same results,” said Christine Dodson, North Carolina Conference treasurer and business manager. She pointed to studies that have concluded the church should have a major restructuring, including one by an independent consultant in 2010.

“It is in our connectional DNA to work together, and efforts to coordinate and focus our efforts should be a part of our self-evaluation as an organization,” she added.

Proponents of Plan UMC Revised say by that by housing the work on women’s and ethnic ministry with a Connectional Table committee, the plan is putting inclusion at the center of the denomination’s work.

Still other United Methodists doubt that the plan accomplishes what it sets out to do, and they say the proposed reorganization actually could reduce the potential for vital congregations.

Kevin Nelson, a United Methodist home missioner in the New England Conference, said the plan concentrates power within the hands of a small group of people — the Connectional Table’s 45 members — and cuts voices out of general church decision-making.

He also wondered if folding up the denomination’s Commission on Religion and Race as an independent agency signaled a limited vision of what vital congregations look like.

Over the past four years, the commission has redirected its focus toward providing resources across the denomination for ethnic and multiracial ministries. In that effort, it has been working closely with the denomination’s ethnic caucuses and ethnic-ministry plans housed at other agencies.

“It’s not the Caucasian part of the U.S. population that’s growing,” Nelson said. “As long as we’re directing resources to majority white congregations and not developing congregations or growing congregations in minority communities, we’re out of alignment with the demographics of this country.”

Nelson was part of a team from the Methodist Federation for Social Action, an unofficial advocacy group, that developed an alternative agency restructuring proposal for the 2012 General Conference. But he said the group has not submitted an alternative plan this time.

Dawn Wiggins Hare, the top executive of the United Methodist Commission on the Status and Role of Women, worries that her agency’s independent work of monitoring gender equity around the globe could weaken if subsumed into a committee. Also at risk, she said, are efforts to prevent sexual misconduct and foster accountability when it does occur.

“Vital congregations are healthy congregations that are free of sexual misconduct,” she said. “And truly principled Christian leaders treat men and women as equals.”

Now is not the time to marginalize that work or the work of Religion and Race, she said. “So much of what we do is creating a vital church in the world, and that means having all voices at the table,” she said. “This plan could quiet those voices.”