Uneasy with the Call to Action's proposed restructuring, leaders of one special-interest group have submitted an alternative reorganization for The United Methodist Church's top lawmaking body to consider.

The Methodist Federation for Social Action, an unofficial progressive caucus, has submitted legislation for a proposal titled "A New UM Administrative Order." The group is the only one of the denomination's unofficial progressive and evangelical caucuses to submit legislation regarding restructuring to the 2012 General Conference, which will meet April 24-May 4 in Tampa, Fla. Such caucuses are special-interest groups that have no official ties to The United Methodist Church. They will be out in force at General Conference to advocate their points of view.

The Methodist Federation for Social Action says its mission is "to mobilize, lead and sustain a progressive United Methodist movement, energizing people to be agents of God's justice, peace and reconciliation."

The federation drafted its reorganization in response to legislation that would consolidate nine of the church's 13 general agencies into a new United Methodist Center for Connectional Mission and Ministry under a 15-member board. Under the legislation, the 15-member board would be accountable to a 45-member advisory board called the General Council for Strategy and Oversight.

The proposed consolidation is the result of the multiyear Call to Action process, initiated by the Council of Bishops and Connectional Table to "reorder the life of the church" in the wake of the 2008 global economic crisis and after decades of declining U.S. membership.

The Call to Action Interim Operations Team brought forward the proposals, and the Connectional Table, which coordinates the denomination's mission, ministry and resources, drafted the legislation. The Council of Bishops affirmed the changes at its fall meeting last year.

By merging agencies, Call to Action leaders say, their plan will help the denomination improve its alignment and meet "the adaptive challenge" of fostering more vital congregations.

However, federation leaders say the Call to Action plan's governance structure fails to represent the denomination's diversity both in and outside the United States and would damage programs that help the church grow.

"Centralizing decision-making tends to result in less effectiveness, less transparency, less accountability and less flexibility to meet the needs of our stakeholders," said Jill A. Warren, the federation's executive director. "And for us as a church, our stakeholders are our members, those to whom we do outreach and those who need to hear the gospel of Jesus Christ throughout the world." 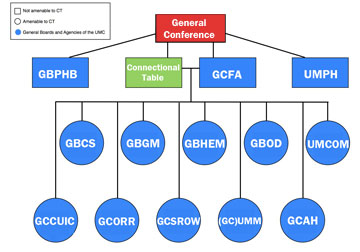 The legislation would replace the Connectional Table with a Coordinating Council of 43 voting members and 24 nonvoting members.

The plan would create four new ministry centers directed by the Coordinating Council:

Each center would have a 33-member board, including 14 members from the seven central conferences (church regions in Africa, Europe and the Philippines); 12 from the five U.S. jurisdictions; two bishops (one from the United States and one from the central conferences) and five additional members elected by each board in accordance with needs.

The proposal would preserve as separate agencies the United Methodist Publishing House, the Commission on Archives and History, and the commissions on Religion and Race and the Status and Role of Women, which are agencies dedicated to monitoring race and gender discrimination. The legislation also would keep United Methodist Men as a self-supporting, separate agency.

In addition, the plan also endorses legislation to fold the Commission on Christian Unity and Interreligious Concerns into the Council of Bishops and establish United Methodist Women as an independent agency.

At a November news conference, the Rev. Brian K. Milford, the head of the Iowa delegation, questioned federation leaders about what their reorganization plan would do to better align the denomination's general agencies to serve annual (regional) conferences and local congregations.

The Rev. Steve Clunn, the federation's coalition coordinator, said the group's plan would include a center for congregational development that incorporates ordination requirements.

"We're focusing on ordination really being about congregational development," he said.

He added that having a coordinating council also would help. "By focusing the coordinating council on really doing just that - on bringing the different boards and agencies that remain together to coordinate their work so that they might have a greater impact on the annual conference and local congregation - we will be strengthening (alignment) in this plan," he said.

The federation's reorganization "doesn't really solve the problem of unifying the church's programming and its structures," Lambrecht said.

"That's the intent of the (Call to Action Interim Operations Team) recommendations - to get everybody working together on the same page. To maintain the separate silos that the MFSA proposal does really doesn't help in that regard."

The Methodist Federation for Social Action also has criticized legislation to eliminate "security of appointment" for elders in good standing.

The group has submitted its own legislation to create an alternative

that pairs evaluations of congregations with their pastors. The legislation also would set up peer groups "to promote collegiality, offer mutual support and accountability among the clergy."

In addition, the federation has submitted constitutional amendments to alter the denomination's global structure.

General Conference delegations from at least three annual (regional) conferences have endorsed restructuring. Two endorsed the Council of Bishops's document, "For the Sake of a New World, We See a New Church: A Call to Action," which outlines suggested changes including the proposed church restructure. A third, the North Texas Conference, has endorsed the Call to Action recommendations.

The delegations that have released endorsements are:

The Committee to Study the Worldwide Nature of the Church wants this year's General Conference to open discussion and initiate a study about creating such a worldwide model. However, the committee opted to hold off introducing legislation in 2012 to bring about the change immediately.

In 2009 and early 2010, voters at annual conferences rejected constitutional amendments approved by the 2008 General Conference that would have formed similar regional bodies.

At the time, the debate about changing the denomination's global structure was caught up in discussions about the denomination's ban on same-sex unions and "self-avowed practicing" gay clergy, which surface at each General Conference. Some voters feared that decisions regarding the issue would be left to individual regions.

While the federation advocates for greater inclusions of gays and lesbians, Clunn stressed that removing those prohibitions was a "nonfactor" in the restructuring legislation.

"It wouldn't change" the Book of Discipline, the denomination's law book," he said. "We would all be together at the same General Conference voting on the provisions of the Discipline," he said.

Neil M. Alexander, president of the United Methodist Publishing House, and Illinois Area Bishop Gregory V. Palmer have been leaders throughout the Call to Action process. They said in a joint statement that they are mindful that varied denominational groups are discussing the Call to Action recommendations.

"We are interested in all questions, critiques and suggestions," their joint statement said.

"Proposals and practices that increase the capacity of The United Methodist Church to direct leadership, time, attention and money for that work (of fostering vital congregations) are all welcome. We are confident that the General Conference will prayerfully and carefully deliberate to chart the best ways to move the connection forward for faithful ministry."