• The Northwest Texas Conference passed a resolution indicating its intent to join a new traditionalist Methodist church under a proposed denominational separation plan.

• People across the conference stress that the resolution is nonbinding, and there remain many unknowns.

• Still, the conference is the first to say it would join another denomination if permitted to do so.

In a nonbinding vote, the Northwest Texas Annual Conference indicated its hopes to join a new traditionalist denomination under a proposed plan of separation.

The vote offers the first signal that an annual conference — a regional body consisting of multiple congregations — would leave The United Methodist Church, if permitted to do so.

By a 184-to-39 margin, conference voters passed a resolution that both endorsed the proposed Protocol of Reconciliation and Grace through Separation and expressed the conference’s intent to join the new denomination under the protocol’s provisions.

Still, Northwest Texas leaders stress that the conference’s resolution is not definitive. Much depends on what happens at the coming General Conference, The United Methodist Church’s top lawmaking assembly.

“The resolution is aspirational,” the Northwest Texas Conference’s Bishop W. Earl Bledsoe said. He presided at the Aug. 13-14 annual conference session in Lubbock but, as a bishop, he did not have a vote.

Bledsoe called the measure “an indication to give the General Conference delegates a sense of where the conference is regarding the protocol.” 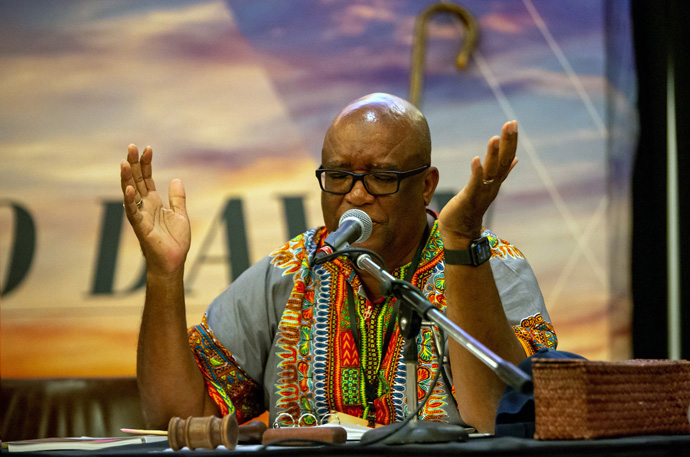 The proposed protocol is a mediated agreement reached by some bishops and advocacy group leaders that aims to resolve The United Methodist Church’s long and intensifying debate over the place of LGBTQ people in the church. The proposal allows traditionalist congregations and annual conferences — those who oppose on biblical grounds same-sex unions and ordination of “practicing” gay clergy — to form a new Methodist denomination, while keeping their properties.

Under the proposal, the new traditionalist denomination would receive $25 million in United Methodist funds. Another $2 million would be available to other groups of churches that might leave.

While multiple separation proposals are heading to the coming General Conference, the protocol has by far the most endorsements across the theological spectrum. Other annual conferences also have signaled their support.

But the Northwest Texas Conference appears to be the first to both endorse the proposal and specify what direction it would go should the legislation pass.

The protocol sets up a process by which annual conferences and congregations can vote to leave.

The United Methodist constitution defines the annual conference as “the basic body” of the church. Under the proposal, a local church would only need to hold a vote if it wanted to go in a different direction than its conference.

The compromise, reached with renowned mediator Kenneth Feinberg, is aimed at avoiding the rash of lawsuits over property seen in other denominations that have divided over stances on homosexuality.

However, one of the big sticking points in the negotiations was what vote margin would be needed for an annual conference to leave with its assets — a simple majority or two-thirds. Ultimately, the negotiators agreed to a number in the middle, thus the legislation requires the support of 57% of those voting for conferences to affiliate with a new denomination.

About 82.5% of the Northwest Texas Conference lay and clergy voters passed the resolution that endorses the protocol and states its intent “to align with a new traditionalist Methodist denomination formed under the Protocol at the earliest possible date.”

He said he was not surprised to see the resolution’s overwhelming support. 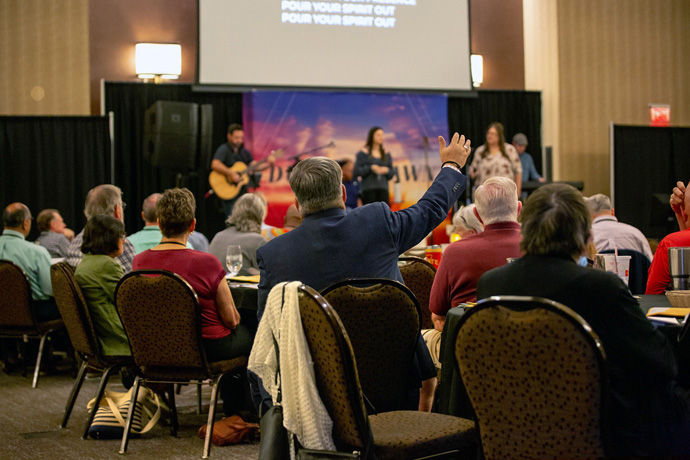 Conference voters join in worship during the Aug. 13-14 Northwest Texas Annual Conference at the Overton Hotel in Lubbock, Texas. During the meeting, the voters overwhelmingly passed an aspirational resolution signaling that the conference would join a new traditional Methodist denomination under a proposed plan of separation. Photo courtesy of the Northwest Texas Conference.

The measure also names the traditionalist denomination it hopes to join — the Global Methodist Church, which is being developed by the Wesleyan Covenant Association. The Rev. Keith Boyette, the WCA’s president, was one of the protocol’s negotiators.

Part of developing a new denomination is trying to gauge how many might want to join it.

“What we were doing was taking the temperature of the delegates at the moment and see where we are today,” said Loyd, who is also lead pastor of one of the conference’s largest churches, LakeRidge United Methodist in Lubbock.

The hope, he said, is that the voters will return to their home churches and begin having conversations about what the conference aspires to see happen.

“I think there is a pretty big hope that we can all hang together as much as possible,” he said.

He described the Northwest Texas Conference as one of the smaller and more conservative such bodies in the U.S.

The conference — which encompasses the largely rural Texas Panhandle and part of West Texas — has about 200 congregations and about 50,000 members.

Northwest Texas shares a bishop with the neighboring New Mexico Conference, which also covers parts of West Texas including El Paso. But that conference did not take up any resolutions related to the protocol.

Late last year, the bishop appointed a 14-member transition team to help the Northwest Texas Conference navigate the decisions before it. The group gave an overview on Aug. 13.

“The purpose is not to lead you in a particular direction,” the Rev. Mike Schafer, the transition team chair, stressed at the beginning of the team’s presentation. “Our purpose is to educate you about all the options in front of you.”

Many of the questions the team fielded related to plans for the new Global Methodist Church.

The resolution vote took place Aug. 14 after the team’s presentation.

“The vote is also a sign that the Global Methodist Church will have a solid foundation of like-minded churches and annual conferences to build on,” said the Rev. Thomas Lambrecht, vice president and general manager of Good News. While a separate organization, Good News works closely with the Wesleyan Covenant Association.

“There is no doubt that the GM Church will be a viable and sustainable denomination,” Lambrecht said.

However, supporters of the resolution acknowledge there will be Northwest Texas churches that choose to go another way.

The Rev. Felicia Hopkins, dean of the Northwest Texas Conference cabinet and a transition team member, said conference leadership has tried exceedingly hard to represent the main options within the protocol. "To those who voted against the resolution it was not a surprise, but clearly a sad and heartbreaking moment," she said.

The Rev. Kevin Young, the senior pastor of St. John’s United Methodist Church in Lubbock, was among those voting no on the resolution. St. John’s is the conference’s only reconciling congregation, meaning it supports LGBTQ equality in the life of the church.

His wife, Laura Young, is an organizer with the advocacy group Reconciling Ministries Network.

He expected the resolution to pass, but he said he was surprised there were as many no votes as there were. He also said there were abstentions that are not part of the tally.

“The speeches against it were of the variety that there are just so many unknowns,” the pastor said. “It seems premature to be making a statement like this. I think there is some uncertainty even in the Northwest Texas Conference.”

Supporters of the resolution agree that much remains unknown.

The COVID-19 pandemic already has forced the postponement twice of the General Conference, which draws voting delegates from four continents.

The legislative assembly is now scheduled for Aug. 29-Sept. 6, 2022 in Minneapolis. However, the challenges of getting delegates vaccines and visas, as well as the spread of the more contagious delta variant, hampers that planning.

Both Youngs also question whether The United Methodist Church’s constitution allows an annual conference to vote to disaffiliate.

The Judicial Council, the denomination’s top court, decided that it will not rule on the protocol’s constitutionality until General Conference has the opportunity to act on the proposal.

However, the Rev. William B. Lawrence, a former Judicial Council president, argues in a memo broadly circulated among General Conference delegates that this protocol provision is unconstitutional. He said the measure goes against the constitutional authority given to jurisdictional and central conferences — the denomination’s intermediate regional bodies — to name, number and set the boundaries of annual conferences.

In a 2018 ruling, the Judicial Council said annual conferences have "autonomous control over the agenda, business, discussion, and vote on the question of withdrawal." That part of the ruling dealt with a provision that ultimately did not take effect.

In any case, any legislation that goes before General Conference is likely to be debated and amended. And as with any compromise, the protocol has left just about everyone wanting to see changes. Yet any amendments are likely to cost the protocol support from some portion of delegates, Laura Young said.

For now, she said, support for the protocol seems to be a moving target, particularly internationally.

General Conference delegates do not serve as representatives doing as their conferences direct. They are elected to vote their conscience, as the Holy Spirit moves them.

“I spoke in favor of the resolution namely because I felt we needed to get a snapshot of where our conference was,” said Jones, lead pastor of Wolfforth (Texas) United Methodist Church. “If it did nothing else, it validated what we thought we knew about each other.”