• Billions of cicadas are part of “Brood X,” covering parts of 15 states and the District of Columbia.

• Pastors have had to adjust or call off some outdoor services.

• That the insects emerge after 17 years underground has moved some clergy to theological reflection.

The Rev. Bonnie Scott recently preached an online sermon titled “The Cicadas Are Humming.” She did it in the style of spoken-word poetry, and she included the sound of cicadas in the background.

Asked what technology she drew on for the special effect, Scott — pastor of Trinity United Methodist Church in Germantown, Maryland — replied that she hadn’t used any.

“I just opened the window,” she said.

This is a Brood X cicadas year, meaning billions of the red-eyed, flying insects have noisily emerged in parts of 15 states and the District of Columbia, after spending 17 years underground.

United Methodist clergy are finding inspiration in this miracle of nature. They’re also having to cope.

The Rev. Ashley Allen, pastor of Oakton United Methodist Church in Oakton, Virginia, retreated inside with some parishioners from an outdoor gathering where cicadas were nearly overwhelming in their buzzing and flying around. 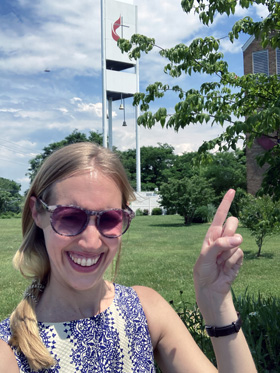 In the church narthex, she removed a cicada that had come inside with an older parishioner, hopping from his shirt to his face.

“I told him to close his eyes so I could get it off quick and get it back outside,” she said.

Though they look somewhat like locusts of Bible fame, cicadas are different anatomically in key ways. They fly but don’t really swarm, as do locusts. And they don’t decimate crops.

Once above ground, cicadas drop their shells, form wings and search for landing places on hardwood trees or shrubs. The males’ mating calls account for the shrill sound.

In their few days above ground, the adults mate and the females lay eggs on leaves. The hatched cicadas chew through branches that fall and carry them to the ground for the cycle to begin again.

There are many cicada species, but only a few are periodical cicadas, emerging after 13 or 17 years. Brood X — the X is the Roman numeral for 10 — is one of the largest, with the Baltimore-Washington area as its epicenter.

In Washington, on June 8, the charter plane set to carry journalists to Europe to cover President Biden’s visit there had its engines clogged by cicadas. Another plane had to be found.

Last year’s Brood IX emergence coincided with United Methodist churches moving to drive-in and other outdoor services because of the pandemic. The Rev. Jon Woodburn, then pastor of Oakland United Methodist Church in Dry Fork, Virginia, remembers sound technicians turning up the volume because of competition from cicadas.

“Not only was it loud, those little suckers would bomb worship leadership and fly into people’s cars,” said Woodburn, now serving a church on the Virginia coast.

As with the general population, United Methodist clergy vary in their feelings about cicadas.

The Rev. Jennifer Smith Walz, lead pastor of Princeton United Methodist Church in Princeton, New Jersey, is fascinated. She has been taking photos of the Brood X cicadas, and measuring their sound.

“I was outside getting lunch a little bit ago and on my Apple Watch, the decibel reading went up to 91,” she said. 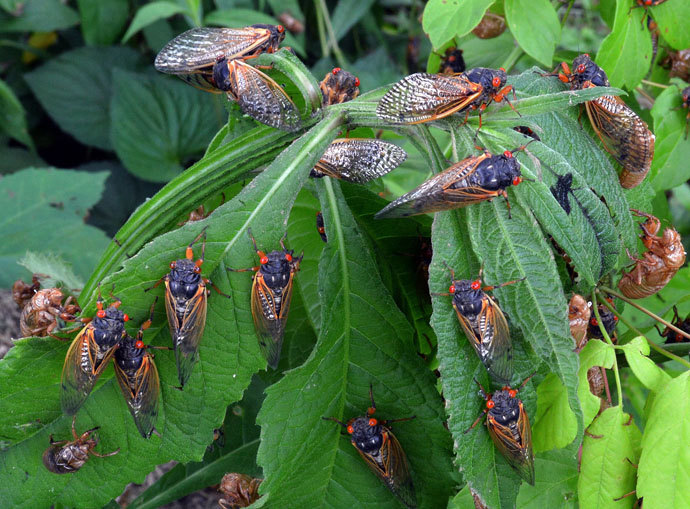 Smith Walz recently used cicadas as the subject for a children’s message. She finds theology in entomology, including the need for creation care. Some parts of Princeton, she notes, are void of the sound of cicadas, because the ground they would emerge from has been paved.

While a cicadas fan, Smith Walz is a bit concerned that they will drown out and gross out people at her church’s upcoming Juneteenth cookout.

“I didn’t know we were going to have to make cicada-contingency plans,” she said.

Scott, the Germantown pastor, has already called off an outdoor service because of cicadas.

But she, too, is entranced by them, as evidenced by her decision to preach a sermon about how they offer what she calls a “beautiful interruption” in climate-controlled human lives.

“It reminds us there’s no way to keep the outside out and the inside in,” Scott said by phone. “I wanted to draw a parallel to the way Christ enters our world.”

Allen called her talk “The Dreaded Cicada.” She shared with her church how, 17 years ago, she was driving through Baltimore with the windows down when a cicada landed on her dashboard.

“I do know they are God’s creation, but I also believe God created … me and those critters to not inhabit the same space,” she said.

“We have to make a decision as to whether we’re going to face our cicadas,” she said in the devotional. 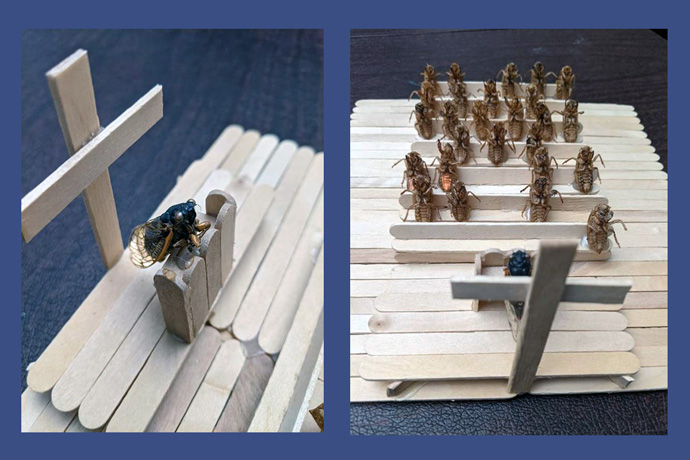 Staff and members of Fairlington United Methodist Church, in Alexandria, Va., cherish photos of a model church made by a boy in the congregation 17 years ago during the last Brood X cicadas emergence. He used cicada husks and Popsicle sticks. Photos courtesy of the Rev. Janine Howard.

Cicadas have lately been a major topic of conversation at Fairlington United Methodist Church in Alexandria, Virginia.

The Rev. Janine Howard noted that staff and members are still sharing a photo of a model church created 17 years ago by a boy in the congregation, Jonathan Dooley, who used Popsicle sticks for pews and cicada carcasses for people. He gave the cicada church as a present to the departing pastor, the Rev. Drema McAllister-Wilson, whose tenure extended back another 17 years.

If there’s a pastor who is wistful about cicadas, it’s the Rev. Barbara Miner, associate pastor at Floris United Methodist Church in Herndon, Virginia.

Seventeen years ago, her daughter was married in a backyard ceremony, with a lot of uninvited guests.

“We had to pick cicadas out of her veil,” Miner said. “The bridesmaids would run screaming. We’ve got these great pictures of people trying to look happy and natural and, in fact, they’re terrified.”

Miner has used this Brood X cicada season to reflect on all that’s happened since the last one, including her daughter having had two children, and she and her daughter both having lost family members and close friends.

“It gives you this opportunity to look back at 17 years and realize how short that time is, and yet how much has changed,” she said.

Miner is sentimental, but only to a point. She noted that cicada husks have been piling up outside the entry to Floris United Methodist.

“Our facilities guy had to get the leaf blower.”