The Rev. Tyler Daniels spent his Sunday not preaching but rescuing hundreds of people from their flooded homes in and around Leland, North Carolina.

“We saved a lot of people’s lives,” said the United Methodist pastor, who also serves as a volunteer firefighter.

But making people whole will take much longer. “Just seeing the way my community is right now, it’s absolutely devastated,” Daniels said. “Thousands of people have no place to go.”

The slow-moving storm also has led to the deaths of at least 33 people — 26 in North Carolina, six in South Carolina and one in Virginia.

While the record-breaking rains of Florence have stopped in much of the eastern Carolinas, waters are still on the rise and an increasing number of homes, businesses and churches are underwater. Some rivers won’t crest until Sept. 19.

United Methodists still can’t assess the full damage wrought by the giant storm that roared ashore as a Category 1 hurricane and has since weakened to a tropical depression. Many of the areas hit were still recovering from the ravages of Hurricane Matthew two years ago.

Yet amid this uncertainty, church members have found ways to help people forced to evacuate and have begun making long-term plans for relief.

Bishop Hope Morgan Ward of North Carolina Conference spent her Monday reaching out to leaders across the conference, which encompasses the eastern part of the state.

“We have strong hope. We also have deep lament,” she said. “Many of our people have been hurt in the storm. We are concerned about vulnerable people, older people, children.”

But she added that United Methodists in the conference are committed to helping with the recovery and are grateful for the aid already extended. The United Methodist Committee on Relief has distributed $10,000 emergency grants to both the North Carolina and South Carolina conferences at their request.

On firefighter duty since Sept. 12, Daniels hasn’t yet learned how his parsonage fared. His wife, pregnant with their first child, evacuated to Selma, North Carolina — more than two hours away.

He has spoken to at least 20 members of his congregation, Zion United Methodist Church, whose homes sustained flood damage. The church building itself also took a beating.

“I just tell them that through this, we’re going to truly find out what church really is,” he said. “And that is being one body and working together.” 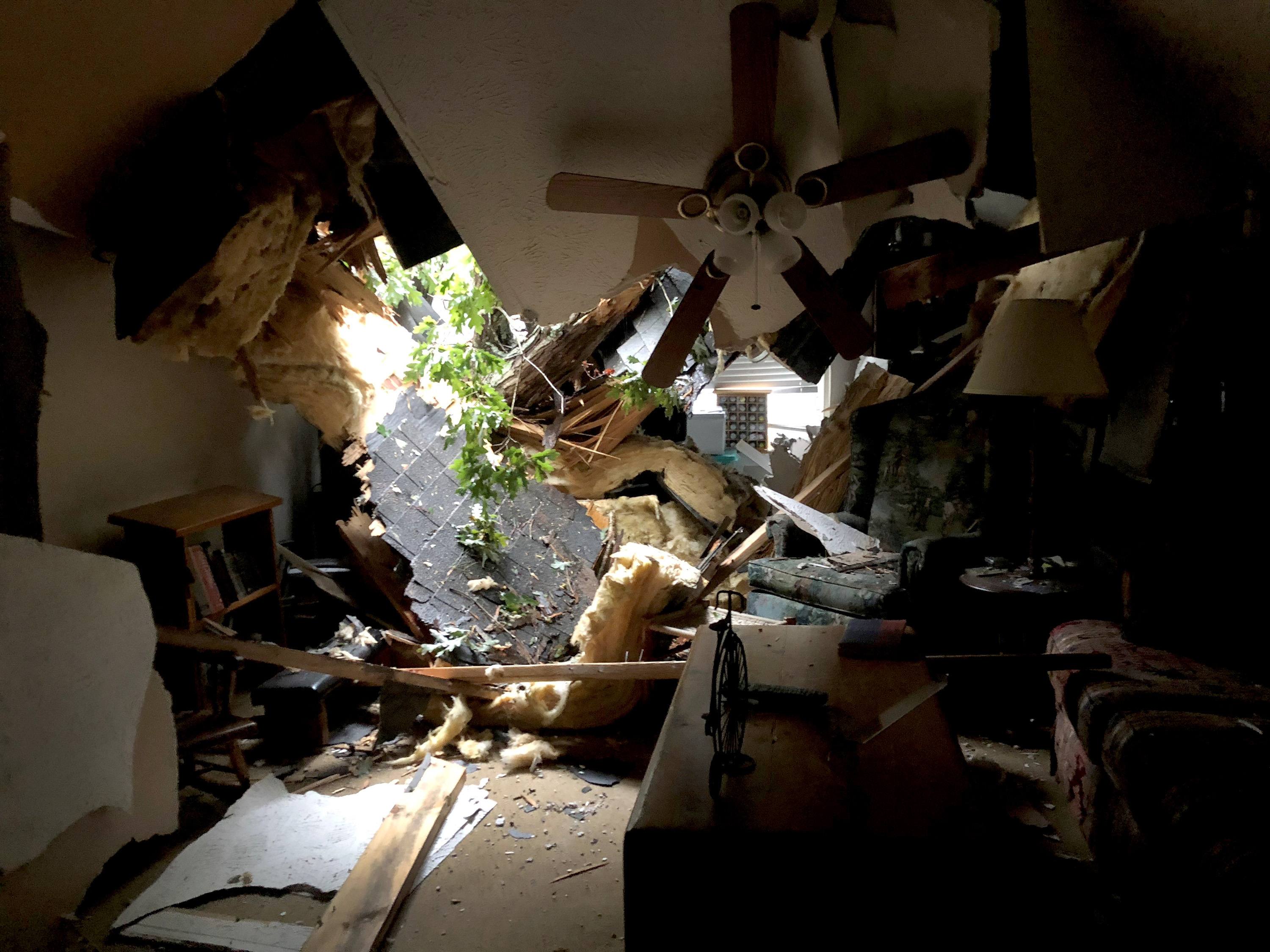 The interior of the Greeners’ home office shows the damage wrought by Florence, which roared in as a Category 1 hurricane. The Rev. Thomas M. Greener is the pastor of Camp Ground United Methodist Church in Fayetteville, N.C. Photo courtesy of Thomas M. Greener.

The Rev. Tom Greener, pastor of Camp Ground United Methodist Church in Fayetteville, North Carolina, has both reason to lament and to be grateful.

Not long after his wife came down for dinner Sept. 14, a tree crashed through the parsonage’s roof and into his wife’s home office. Both husband and wife and their two dogs were unharmed.

The Greeners still don’t have power, but they remain in their house. Neighbors helped the couple remove as much of the tree as they could and tarp up the missing roof. The pastor recounted what happened when he gathered with his congregation Sunday for a brief prayer service.

“I told my congregation I regretted I didn’t know these neighbors’ names — I do now,” he said. “But they came and they helped out. It makes you very aware of the good Samaritan story.”

Julia Royall, youth minister at Ann Street United Methodist Church in Beaufort, got to see how that kind of neighborly spirit can multiply. She went to Raleigh to stay with her sister, and the state capital went through the storm largely unscathed. But that left Raleigh residents with cases of water and other emergency items they didn’t need.

The Royall sisters decided to rent a U-Haul truck to bring whatever bottled water, batteries and nonperishable food items people in and around Raleigh were willing to share. The sisters posted their invitation on Facebook and got many more supplies than they expected, completely filling the truck.

The two planned to deliver the supplies Monday to Ann Street United Methodist Church, which sustained only minor damage and plans to be a hub for relief operations. Beaufort is the most populous city near the isolated communities known collectively as Down East. The area is only reachable by ferry even during normal times.

“I have only lived in Beaufort a year, but the way people just accepted me and brought me into their community, they immediately treated me as their own,” Julia Royall said. “This is the very least I can do.” She and her sister posted a video on Facebook singing their gratitude to the tune of Taylor Swift’s “Shake It Off.”

As the storm was bearing down, South Carolina Conference’s Bishop L. Jonathan Holston said he is thankful for the connectional nature of our church.

“While the storm was still at sea, your annual conference Disaster Response Team, in partnership with the United Methodist Committee on Relief, began making plans to respond after the storm to bring tangible support and a spirit of hope to the communities affected by the storm,” he said in a statement.

Eventually, both the North Carolina and South Carolina conferences will need volunteer teams to help with mucking out homes and with long-term recovery. But for now, leaders in both conferences ask for people to financially support UMCOR and conference relief efforts, prepare relief kits and most importantly, pray.

Steve Taylor, a home missioner and director of connectional ministries in the North Carolina Conference, lives in hard-hit Lumberton, which still hadn’t fully recovered from Matthew when Florence inundated the city.

“Knowing that people are praying for us, I can’t tell you how much that means,” Taylor said. “It’s like someone is throwing us a life preserver.”

United Methodists prepare to help others after Mangkhut cuts a path of destruction across the northern end of the island of Luzon.
Disaster Relief