Becky Harrell Wright looked out the church van window and exclaimed at something she didn’t see.

“The restaurant is gone!” the retired United Methodist missionary said. “Oh, my gosh. We used to come over here all the time.”

Wright’s dismay at not finding a favored seafood place from her years of living in and near Corpus Christi, Texas, came during a two-hour driving tour offered by the Rio Texas Conference during its recent annual gathering.

The purpose was to show that damage remains from last year’s Hurricane Harvey, and that United Methodist volunteers continue to be needed.

“We get questions all the time, people saying, ‘You’re still doing Harvey recovery? Aren’t all those people home?’” said Vicki McCuistion, disaster recovery asset manager for the Rio Texas Conference. “This is an opportunity to drive the streets and show them that, no, not everybody is home.”

The Rio Texas Conference and Texas Conference both were still responding to flood-related needs of recent years when Hurricane Harvey hit on Aug. 25, 2017, ultimately causing 88 deaths and more than $125 billion in damage.

The storm’s torrential aftermath in Houston and nearby East Texas communities drew most of the media attention, thanks to searing images of flooding and rescues by the Cajun Navy and other volunteers, including United Methodists.

Vicki McCuistion (front), disaster recovery asset manager for the Rio Texas Conference, gives a briefing during a Hurricane Harvey recovery tour stop at Aransas Pass United Methodist Church. The conference put on the tour during its annual gathering, hoping to persuade delegates to share the word with their churches that volunteer teams are still needed for recovery work. Photo by Sam Hodges, UMNS.

Fourteen counties within the vast Rio Texas Conference have seen some 118,000 FEMA registrations. And the damage, while intermittent, ranges far and wide.

“The most difficult thing to deal with is how widespread it is,” said Gene Hileman, Rio Texas Conference disaster relief coordinator.

First United Methodist Church in Victoria, Texas, has been a center of Harvey-related volunteer work. Its pastor, the Rev. Timothy Brewer, estimates that 3,000 to 4,000 homes locally had damage not covered by the Federal Emergency Management Agency or private insurance.

“I think we’ve completed (restoration of) something like 500 of those homes,” Brewer said.

UMCOR is one of five members of National Volunteer Organizations Active in Disaster to be chosen to work with FEMA and the state of Texas in Project Comeback: Texas, a first-of-its-kind collaboration aimed at more coordinated response.

From almost the beginning, the Victoria church has housed volunteers, though it lost a roof and had water damage from the storm.

“We’ve had somewhere over 1,000 people spending the night in our building,” Brewer said of the nine months since Harvey. “We expect 800 more in June and July.”

The connectional nature of United Methodism has been on display, with equipment coming from as far as the California-Pacific Conference, and volunteer teams arriving from around the state and well beyond.

The June 6-8 Rio Texas Conference gathering in Corpus Christi was the first since the hurricane, and a chance to tout all the recovery work done or underway. A video shown to delegates included emotional testimonies from people who are back in their homes thanks to the conference’s leveraging of volunteers and financial resources. 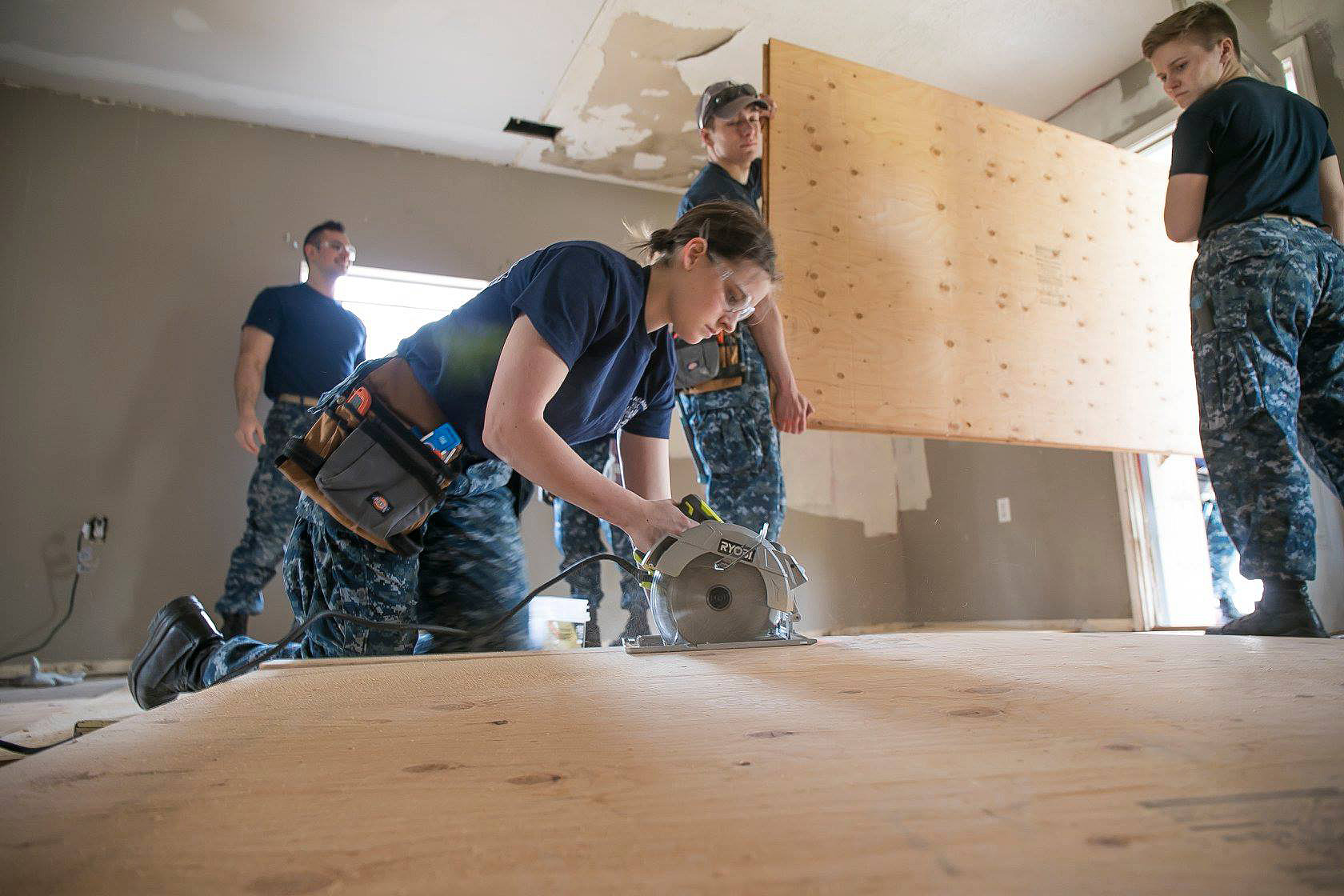 The U.S. Naval Academy contributed volunteers to Hurricane Harvey recovery work in Rockport, Texas, this past March, during the school’s spring break. The Rio Texas Conference provided case management support for the project the Midshipmen helped with. Photo courtesy of the Rio Texas Conference.

But the ongoing need for volunteers and donations, including from within the conference, led to the idea of a Harvey recovery tour as part of the annual meeting.

On June 7, about 30 people devoted their lunch break to climbing into one of two church vans and heading out with Rio Texas officials for a drive to Aransas Pass and Rockport— two hard-hit communities just north of Corpus Christi.

Along the way, they saw businesses boarded up or under reconstruction, as well as vacant lots where businesses operated before Harvey. In residential areas, there was more of the same, with van riders remarking on how many new roofs there were, and how many blue tarps indicating the roof was still to come.

At First United Methodist of Aransas Pass, the group got a briefing from McCuistion and Sophie Longoria, a case management supervisor. They also met case management workers based at the church.

One of those, Amy Collins, noted that life goes on for those waiting to get back in their homes.

“There’s deaths in the family, there’s divorce, there’s sickness,” she said. “All that’s going on in the midst of (them) trying to recover. Those are the stories that get to you.”

From McCuistion, the group heard that volunteer numbers are strong now, thanks in part to youth groups.

“August is available for anyone who wants to come,” she said. “We have lots of space available in the volunteer villages through the fall and spring.”

He’d followed the Harvey story closely through the news.

“Now I have an opportunity to see firsthand the recovery effort at nine months, and get a better idea of what I might contribute,” he said.

Wright planned to return to her current home town of New Braunfels, Texas, and let United Methodist churches there know what she saw and how they might be helpful.

She’ll go with a sense of gratitude for United Methodists at work already.

“They’re doing what we’re supposed to do, being the hands and feet of Jesus.”

The Commission on General Conference has decided on a process to help delegates do the legislative work together.