• People mistrustful of other institutions may still trust faith leaders to address their concerns about getting a COVID-19 vaccination.

• Sponsoring mobile vaccinations, hosting community discussions and sharing video testimonies of why members chose to be vaccinated are practical steps churches can take.

President Joe Biden has set a national goal of 70% of U.S. adults with at least one dose of the COVID-19 vaccine by July 4, and he’s hoping that the faith community will help to achieve it.

Currently, 64% of the adult population has received the first dose of the vaccine. Biden declared a “national month of action” in the 30 days leading up to Independence Day and is looking to national and community organizations, including the religious community, to encourage vaccinations.

During a May 26 online summit hosted by Faiths4Vaccines, a national multifaith initiative, U.S. Surgeon General Vivek Murthy told attendees, “At a moment where people are casting about and wondering who they can lean on for information … they look to people they know, to people they trust,” and that faith leaders have the trust of their communities.

A concerning trend is that even though vaccines are much more widely available than a few months ago, vaccination rates have been declining. Much of that is due to individuals’ medical mistrust and hesitancy to get the shot.

This is where churches can play an important role. 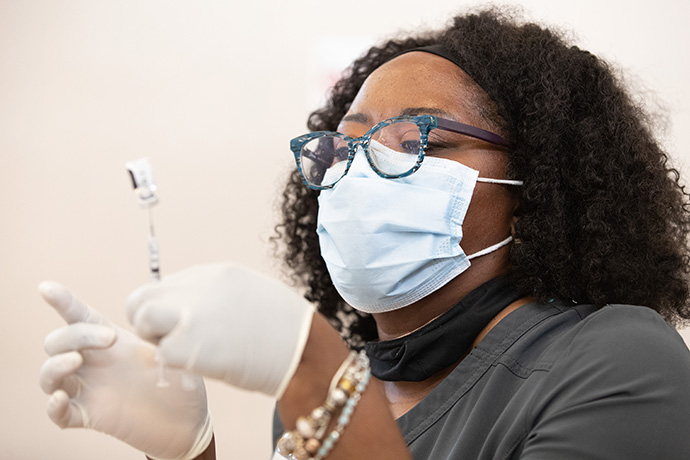 Tia Moore, a nurse practitioner, prepares a dose of COVID-19 vaccine during a vaccination clinic at Meharry Medical College in Nashville, Tenn., in March. The United Methodist-related school has served as a vaccination site since January and also operates a mobile vaccine clinic.

“The setting in which you get the vaccine matters because people want to be where they feel comfortable, and churches represent a place of comfort and security for a lot of people,” said Dr. James E.K. Hildreth, president and chief executive officer of Meharry Medical College in Nashville, Tennessee. The historically Black medical school is supported by The Black College Fund of The United Methodist Church.

Meharry has served as a vaccination site since January and also operates a mobile vaccine clinic.

“Being located in a predominantly African American neighborhood, medical mistrust is an issue,” said Cat Nash, who serves as the clinical lead for vaccinations at the school. “Churches lend credibility, and clergy are a good way to reach out to patients.” 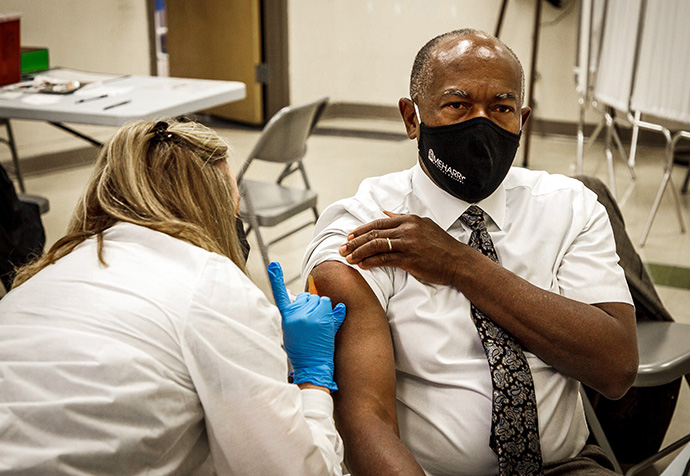 Hildreth agreed. “The most urgent need is for someone to get the attention of the people who are holding out, just to answer the questions,” he said.

While acknowledging the concerns of those who are hesitant, Hildreth points out that more than 2 billion vaccines have been administered worldwide, “so no one’s a ‘guinea pig’ any more. Adverse effects are extremely rare.” 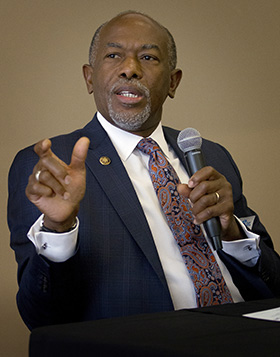 Photo courtesy of Meharry Medical College.
Dr. James E.K. Hildreth, Meharry Medical College president and CEO, has been involved with COVID-19 vaccine development from the beginning. He serves on the Food and Drug Administration committee that reviews vaccines and recommends approval, and he led several vaccine trials at Meharry. In February, he was named to the White House COVID-19 Health Equity Task Force.
He said the work of the task force is divided into three areas: communications, the inequities themselves and what caused them.
“We try to find those individuals or organizations who are best suited to speak to the persons most impacted by COVID-19,” he said, “then we look at how to make sure the resources that have been proffered for COVID-19 get distributed in an equitable fashion. Finally, we ask what were the drivers that caused there to be such disparities in COVID-19 disease and death.”
“The health disparities in our country weren’t caused by COVID-19, they were pre-existing and COVID-19 just exploited them,” he said.
The 12-member task force — which brings together leaders in medicine as well as public policy and rights advocacy — hears from experts in fields that deal with these issues. Based on those conversations, the group will generate recommendations for the Biden administration.
Noting that he doesn’t speak for the task force, only as an individual member, Hildreth said, “I’m most excited about the possibility of making recommendations that will have a long-term impact, so that the next time we have a national health crisis, we’re not talking about brown and Black people being mostly affected.”
— Joey Butler, UM News

Historical mistreatment of African Americans by the medical community — the Tuskegee experiment and Johns Hopkins Hospital harvesting the cells of Henrietta Lacks being well-known examples — has caused many to have a hard time trusting doctors. Misinformation also can be difficult to overcome. Some are simply concerned about pain or illness caused by the shot.

“The biggest problem is people who hear of a friend who had a bad reaction or rumors, and they get in their head they don’t want it,” said Nash. “People worry about the side effects of the second dose because they vary so much.”

About 65% have no reactions at all, said Carl Wood, president and pharmacy manager of Vax Van by MVS, a mobile vaccination clinic partnering with United Methodist churches in Charlotte, North Carolina.

“When I talk to people about that, it often convinces them it’s OK,” he said.

Wood said that faith leaders getting vaccinated themselves set an example: “If church leadership takes their shots, someone can say, ‘I can feel safe, too.’”

Young people are another group that has been slow to get vaccinated.

Siblings Ashlee Hand, 20, and Walter Hand III, 18, have both been vaccinated and worked at an April 30 vaccination clinic held at St. Mark’s United Methodist Church in Charlotte. They said people in their age group often listen to misinformation or think that young people don’t have to worry about catching COVID-19.

“A lot of my friends are getting false information, or their parents don’t want them to get it. A lot think they have immunity,” Ashlee Hand said.

Walter Hand said a few of his friends have gotten vaccinated, and he tries to encourage others to do the same.

“I tell them that I think getting the shot has allowed me to do more things, to feel safer going out,” he said.

Similar hesitancy issues exist in the Latino community, often due to misinformation. Many have concerns that they will be asked for proof of citizenship in order to get the vaccine, leading to concerns that large numbers of undocumented immigrants will remain unvaccinated. It may also be uncomfortable for non-English speakers if no one who speaks their language is present, so having translators on hand is a must.

Churches are reaching out to other marginalized communities as well.

According to the Rev. David Wilson, superintendent of the conference, demand for vaccines has dwindled drastically — to the point that the state is about to lose thousands of doses to expiration.

“Yesterday I was at the site for an hour and there were only four people,” he said. “Oklahoma will be far below the levels we need to reach. I don’t know if people have just lost interest or think they’re in the clear.”

Churches and tribes are doing campaigns to educate and urge people to get vaccinated.

Wilson, who serves on the board for the Oklahoma City Indian Clinic, said it is offering vaccinations at a weekly meal for the homeless, a Native American charter school, even a farmer’s market in town.

“I’m trying any place when I see sites or events where there will be large numbers of people,” he said.

Though hesitancy seems to be the largest barrier, practical issues of inequity also exist for many communities. It may be difficult to take time off from an hourly job. Many struggle with transportation issues or may be homebound and living alone. 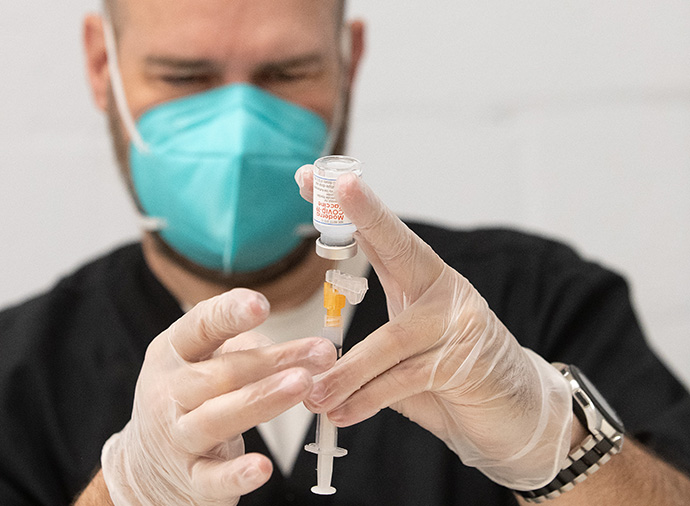 Carl Wood draws a dose of the Moderna COVID-19 vaccine during a clinic at St. Mark’s United Methodist Church in Charlotte, N.C., in April. Wood said that faith leaders getting vaccinated themselves sets an example: “If church leadership takes their shots, someone can say, ‘I can feel safe, too.’”

Churches that have been hosting vaccine clinics at their buildings may have to live by the motto of “meeting people where they are” by venturing into the community.

At its online summit, Faiths4Vaccines listed a number of practical ways churches can break down barriers and hesitancy and increase vaccine access. 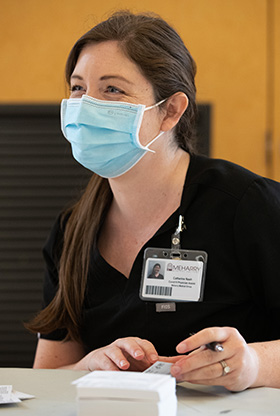 Cat Nash, a physician assistant, is the clinical lead for the COVID-19 vaccination clinic at Meharry Medical College in Nashville, Tenn. She is a member of Brentwood (Tenn.) United Methodist Church.

Some of the suggestions for churches include:

• Offering transportation to clinics or sponsoring mobile clinics to travel to underserved neighborhoods;

• Canvassing door to door in the church’s community to share vaccine information;

• Hosting informational events and open conversations about the vaccine;

• Recording testimonials about why people chose to receive the vaccine and sharing them on social media.

One barrier that concerns Hildreth is the reality that a person’s political views may drive their reasoning not to take the shot. The virus, he notes, “is agnostic to your political affiliation.”

“Any persons who could effectively engage this group in that conversation, we need them to do so, and to do so soon,” he said. “If we don’t get that remaining 30 to 40% of people vaccinated and the virus is allowed to run through that group, there’s still the danger of variants arising that the vaccines don’t do much for.”

Though vaccines are available to most everyone in wealthier countries, there is significant inequity in poorer nations — an issue Hildreth said the church should speak out on.

“The rich countries of the planet need to buy the vaccine and give it to the countries that can't afford it, because none of us are safe until all of us are safe,” he said. “As a global population, we need everyone vaccinated.”

Butler is a multimedia producer/editor and DuBose is staff photographer for UM News. Contact them at (615) 742-5470 or [email protected] To read more United Methodist news, subscribe to the free Daily or Weekly Digests.

When Kansans voted recently to protect abortion rights, they continued a rich history of advocacy.
Bishops