Some United Methodist churches are revving up in-person worship services after being sidelined for months by the coronavirus. But virtual worship seems to be here for good.

“Last week we had about a hundred (in-person worshippers) between the two services,” said the Rev. Bryan Brooks, senior pastor of Franklin First United Methodist Church.

Before COVID-19, that number was more like 1,100, plus another 100-150 at a second site in downtown Franklin, a suburb of Nashville, Tennessee. 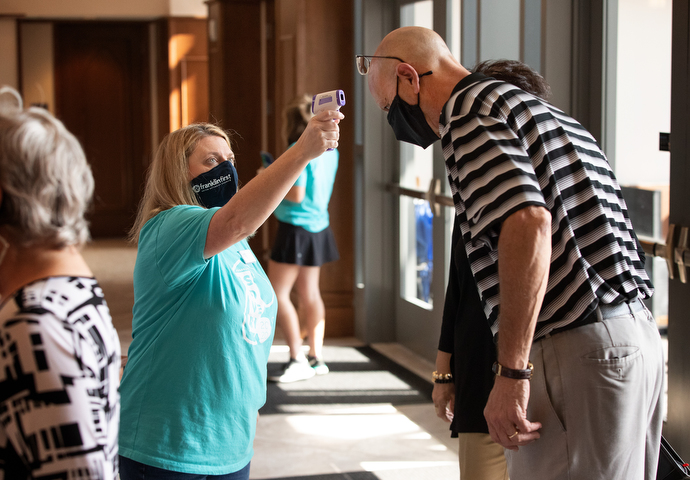 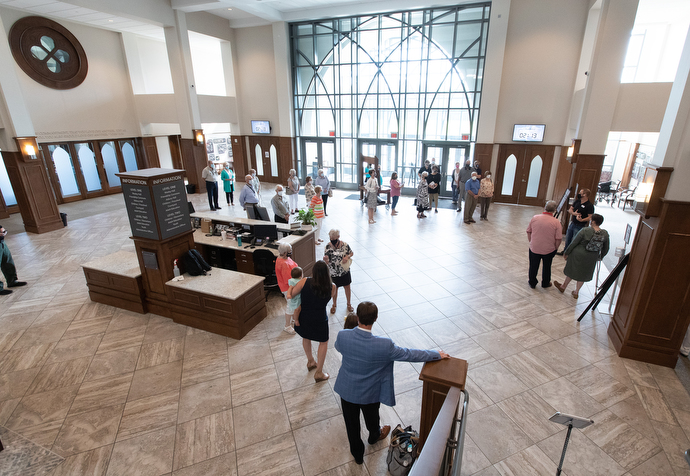 Parishioners gather in the Friendship Commons area to receive safety instructions before worship at Franklin First United Methodist Church. Photo by Mike DuBose, UM News.
At the Iglesia Vida Abundante in Tyler, Texas, Sunday services are drawing about half of the pre-coronavirus attendance of 50-60 people.

“We had less than a year of functioning when (the coronavirus) struck,” said the Rev. Emigdio Rosales, pastor. “Also, the (contributions) have been cut back, so everything is not where we were.” 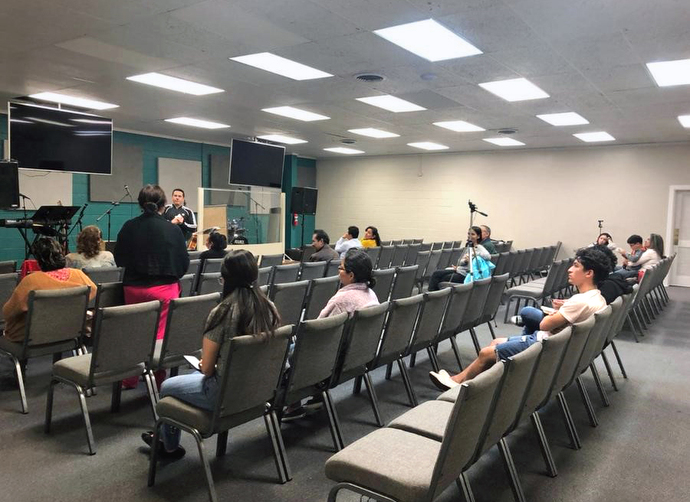 Worshippers gather at the Iglesia Vida Abundante in Tyler, Texas, for Sunday services. The church is drawing about half of the 50-60 people who attended before the coronavirus pandemic. Photo courtesy of Iglesia Vida Abundante.
For now, the virtual presentation takes precedence over the live experience in her church, said the Rev. Amy Lippoldt, pastor of St. Paul’s United Methodist Church Papillion in Papillion, Nebraska.

“My conviction is that the majority of the congregation is going to stay online, and that online worship needs to be our priority,” Lippoldt said. “I don’t know how we would do both really, really well.” 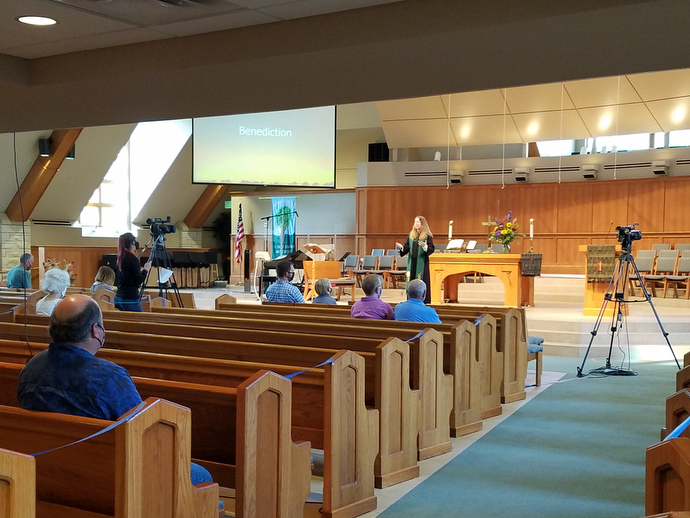 The Rev. Amy Lippoldt leads worship at St. Paul’s United Methodist Church Papillion in Nebraska. About 35 people attended the first services back in the sanctuary on Aug. 16. Photo by the Rev. Rebecca Hjelle.
Lippoldt will preach to the camera instead of those attending, and decisions will be focused on what works best on the livestream broadcast, she said.

About 35 people attended the first in-person services back in St. Paul’s sanctuary on Aug. 16, Lippoldt said. The church seats about 600.

“I believe our high-quality livestream is helping people feel connected to the church and worship even while at home, so the pressure is low here for in-person attendance,” Lippoldt said. “At the same time, I’m glad we are providing it for people who really want to be here.” 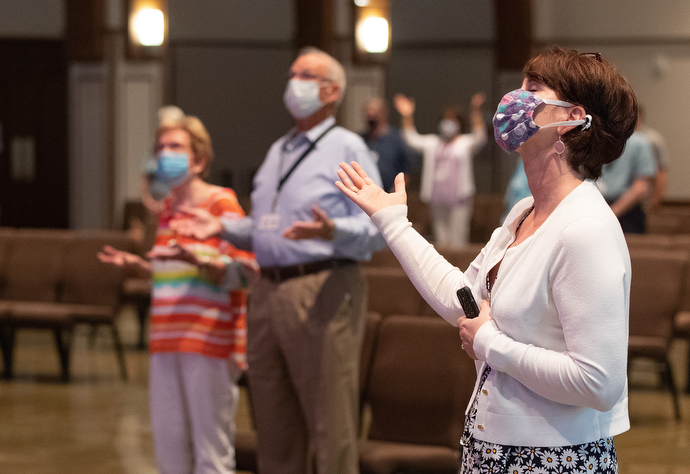 Barbara Layden (front) joins with other parishioners in giving praise during worship at Franklin First United Methodist Church. The church has adopted safety protocols, including no congregational singing, to help prevent the spread of COVID-19. Photo by Mike DuBose, UM News.
Some United Methodists might never return to in-person worshipping.

The Rev. Andrew Conard, pastor of Susanna Wesley United Methodist Church in Topeka, Kansas, said some church members have said they will not be physically back in the church building “for the foreseeable future.”

“We certainly have heard from a number in our congregation because of their particular health situation who’ve said, ‘We’re online folks.’” 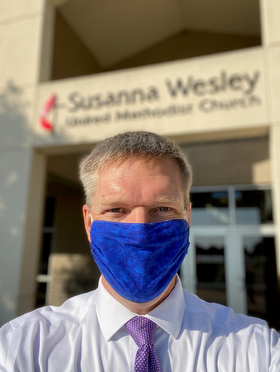 The Rev. Andrew Conard, pastor of Susanna Wesley United Methodist Church in Topeka, Kan., dons a mask for the protection of himself and congregants during worship services. The church resumed worshipping in-person on July 19. Photo courtesy of the Rev. Andrew Conard.
Online worship has its merits, said Jim Berg, staff parish chair at St. Paul’s Papillion.

“You were able to have a cup of coffee and sit in your living room,” Berg said. “Watching on a big-screen TV was OK, but it wasn’t the same experience as you get in church at a service.”

One thing the internet can never replicate, even with Zoom and other services that allow for video conferencing, are the handshakes, hugs and informal chatting before and after services that are a big part of every church.

“We don’t have refreshments,” Rosales said. “We took away the table in the lobby, so people don’t hang out in the lobby before and after the service. We don’t have coffee. … That human connection is kind of lost.”

The normal channels to get feedback from the congregation have been compromised at Susanna Wesley because of the lack of fellowship time, said Carrie Riordan, communications director.

“How we’re used to taking the pulse of the congregation and getting feedback from people just has really been diminished,” she said.

The church is beefing up its small groups ministry, which Riordan thinks will open up the lines of communication again. 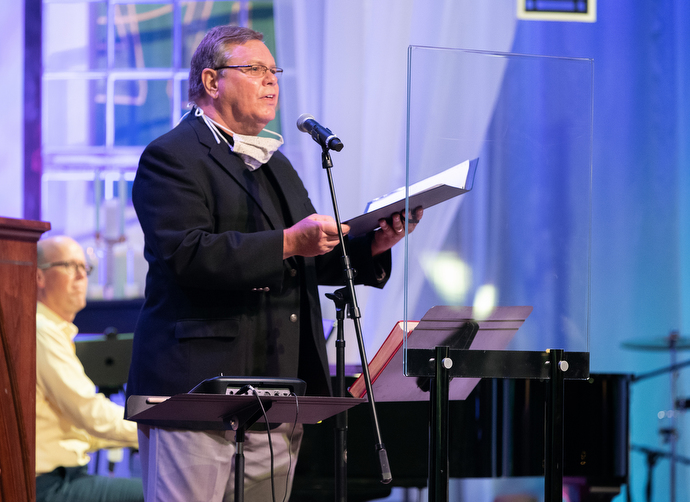 Dave Hintz sings from behind a plexiglass barrier during worship at Franklin First United Methodist Church. The church has adopted safety protocols, including no congregational singing, to help prevent the spread of COVID-19. Hintz is a member of the church’s chancel choir. Photo by Mike DuBose, UM News.

Parishioners sit apart from one another during worship at Franklin First United Methodist Church. Photo by Mike DuBose, UM News.
Along with the standard masks and social distancing adjustments, reopened churches are for the most part banning singing by the congregation to impede the spread of viruses. Choir soloists are being relied upon to do the singing, and some churches allow congregants to hum along with the music.

“One of our pastors does an introduction for songs,” Brooks said. “He’ll say, ‘Feel free to be more expressive with your body, to move around and lift your hands,’ even to the point of giving folks some guidance for that.”

The Rev. Mark Welshimer, senior pastor at Polk Street United Methodist Church in Amarillo, Texas, said his congregants are asked not to hug or shake hands. 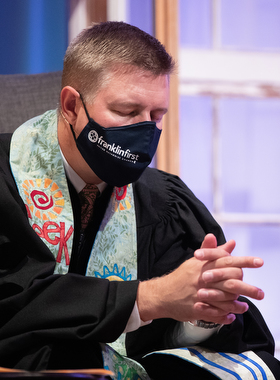 The Rev. Bryan Brooks prays during worship at Franklin First United Methodist Church. Photo by Mike DuBose, UM News.
“We don’t pass the (collection) plate,” he said. “And we’ve had communion served in a different way. We now have individualized communion. We have the little to-go cups.”

Polk Street has had a television ministry for decades. It has thrived during the pandemic.

“We’re in the whole panhandle of Texas, but also in … Oklahoma and portions of New Mexico,” Welshimer said. “We have folks that have been watching for years. It’s hard to get the farmers and ranchers together, just because they’re spread out so much here.”

Like many churches that livestream, Polk Street has a far reach on the internet.

“We’ve seen people on our livestreaming from Florida, Pennsylvania, El Paso (Texas) to California,” he said. “Some were interested in using our YouTube songs. Now in Delaware, Baltimore and California, people are using our videos that we posted on YouTube of our choir.”

Whatever the future brings, Lippoldt said she trusts that God will “lead us into whatever we need to change in order to be responsive to whatever permanent shifts this makes for us.

“I don’t think we’re going to know what has been nurtured enough and where we’ve atrophied … until we get on the other side of the pandemic.” 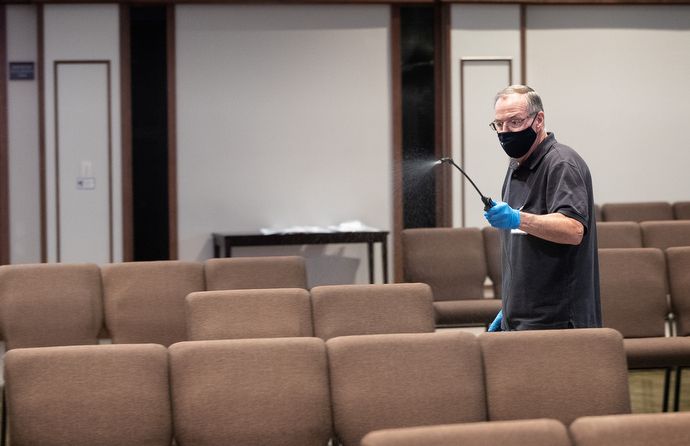