United Methodists are stepping in to help after massive flooding in mid-April left nearly 70,000 people homeless in eastern Congo.

More than 2,400 households received emergency aid from Connexio, the mission network of the Switzerland Methodist Church. The $105,000 donation provided food to flood survivors in 600 households in Kindu and Uvira.

The funds also helped the three other episcopal areas in Congo support pastors and their families who have lost their income due to the COVID-19 pandemic, said Jean-Paul Dietrich, a United Methodist Board of Global Ministries missionary and representative of Connexio Switzerland based in Lubumbashi.

He said Connexio has been offering support to The United Methodist Church in Congo for many years with scholarships and projects related to health, education and nutrition.

“The latest assistance for pastors’ families and victims of flooding was part of a special relief program,” he said.

The country has been battling food insecurity related to unrest in the region, a nearly two-years-long Ebola outbreak and the current COVID-19 pandemic.

There have been more than 2,600 cases of the coronavirus in Congo and 69 deaths, according to the latest data by Johns Hopkins University. 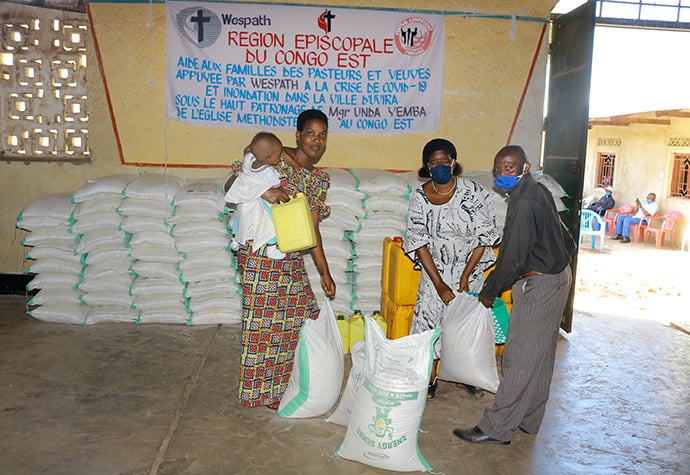 “The food was an urgent need in the short term,” Dietrich said. “I am thinking of a long-term project that will consist of giving seeds to pastors so that they will cultivate (them) in order to have food self-sufficiency in the future days.”

UMCOR also is preparing to provide assistance to those displaced by flooding.

“We are working with both the North Katanga and East Congo episcopal areas to develop emergency grants in response to the devastating floods that recently occurred. We aim to move as quickly as possible to support the (disaster management coordinators) in responding to urgent community needs,” said Lara S. Martin, executive director of UMCOR.

Sheik Useni Aruna saw his home submerged by the waters of the Congo River in Kindu. The Muslim father of 17 said he and his family have struggled since their home was destroyed.

“The assistance with food that I have just received will allow me to keep a few days of food in my family. Thank you to The United Methodist Church for thinking of us,” Aruna said.

Bishop Ponio Kiuwa Changa of the Come and See Center, a revival church in Kindu, hailed the aid from United Methodists.

“We believe that this is a very important social role that a church can play beyond bringing about evangelism. We pray to God to bless all the donors who allowed us to eat during this period,” Ponio said. 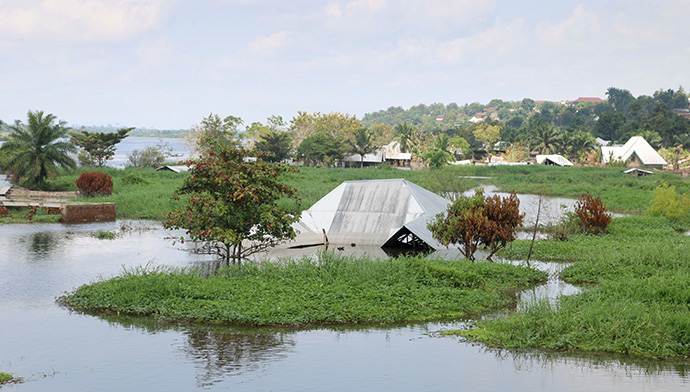 Thousands of homes in Kindu, Congo, were submerged by the waters of the Congo River in April. Although the water has receded, the river is still flooded. The United Methodist Church in Congo has been providing food for flood survivors who have been displaced. Photo by Chadrack Londe, UM News.

For the Rev. Kalema Tambwe, superintendent of the South Kindu District, this assistance is part of the ministry of Jesus Christ.

“Jesus Christ, whenever he taught people, thought of giving them food. Food is an important element in someone's life, which is why this assistance will help the victims of the floods, as well as others, to reduce their loads during this difficult period of distress,” Tambwe said.

Beni District superintendent, the Rev. Dumas Balaganire, thanked the Methodists from Switzerland for their assistance and continued partnership with the church in Congo.

He said that flooding continues to be an issue in Uvira and Kindu and urged the Congolese government and the development office in the East Congo Episcopal Area to study and tackle the causes of the floods.

“We will have to focus on the cause by developing reforestation projects to fight against these floods in the future days. All this is part of climate change that the world is experiencing,” he said.

More than 50 people died and 200 were injured in the most recent flooding.

Widow Zaina Lokombe has been living with a United Methodist church member since her house was swept away by the floods in Uvira.

“The church has just surprised me because I no longer had the food supply for my three children, and I did not expect to receive this food,” she said.

Christine Pimbi, a volunteer with the East Congo emergency office, said roads and bridges remain damaged from the flooding, preventing families from accessing nearby villages to search for food.

Dr. Claude Watukalusu, director of Uvira United Methodist Hospital, said he is still concerned about safe drinking water in the region after the water catchment facilities of the Water Distribution Board were washed away in the flooding.

“I fear the water diseases that could still cause (more) deaths in Uvira District,” he said.

Despite the challenges facing the region, Bishop Gabriel Yemba Unda is hopeful for the future.

“This help comes at the right time when everyone is forced to stay at home and this has just forged once again our partnership with the faithful Methodists of Switzerland and Wespath.”

Kituka Lolonga and Tambwe Londe are communicators in East Congo.