The Door of Hope was wide open and filled with the laughter of children.

The Salvation Army shelter, Casa Puerta de Esperanza or Door of Hope, had a Christmas party Dec. 15 for the migrants living in the shelter and their neighbors. Loud speakers pointed toward the neighborhood poured out Christmas carols and seemed to draw people inside.

The shelter is currently housing 24 women and children. More than 70 children with their parents in tow were enjoying a morning of carefree play. 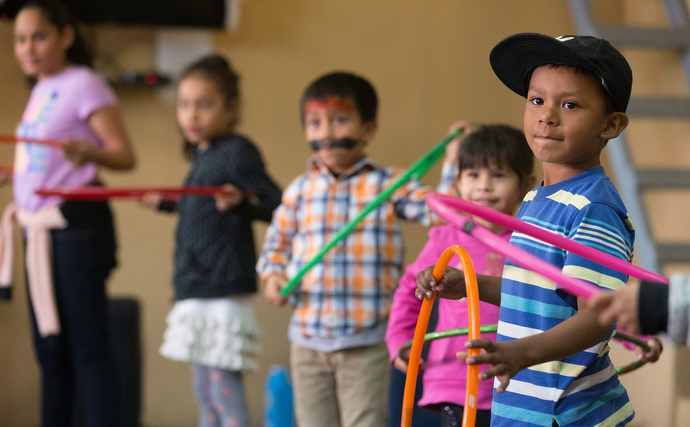 Children watch a skit during the Christmas party.
Members of Iglesia Methodista Nuevo Pacto were front and center of all the festivities with an energetic group of young people who led the children through games for more than two hours. The Rev. Noel Caudillo, associate pastor, also brought his two young sons.

The small shelter in the middle of a neighborhood was decked out for the season with red and green balloons, star-shape piñatas and tables dressed in green and red tablecloths. The tables overflowed with pizza, fruit-filled gelato, churros, bags of candy and two beautiful Christmas cakes. 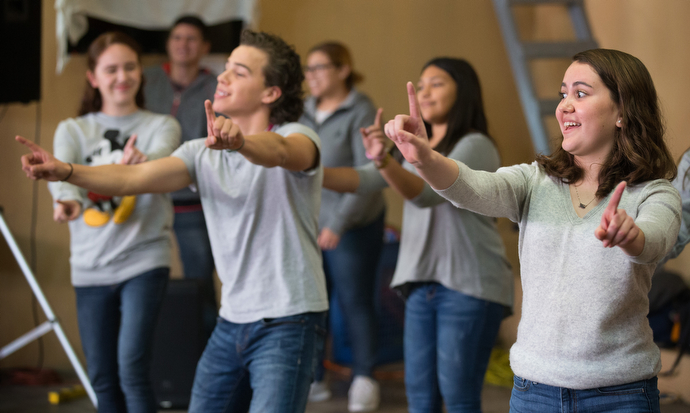 Youth from Nuevo Pacto Methodist Church lead a dance during the Christmas party.
The youth group members led the children in songs, taught some dance moves, held hula-hoop and jump-rope competitions and were in great demand for their face-painting skills.

A highlight of the games featured balloons tied to one of each child’s shoes. The point of the game was to pop someone else’s balloon without losing your own. Squeals of laughter were punctuated with the loud pops of balloons that left little slivers of colorful tattered rubber tied to shoelaces. 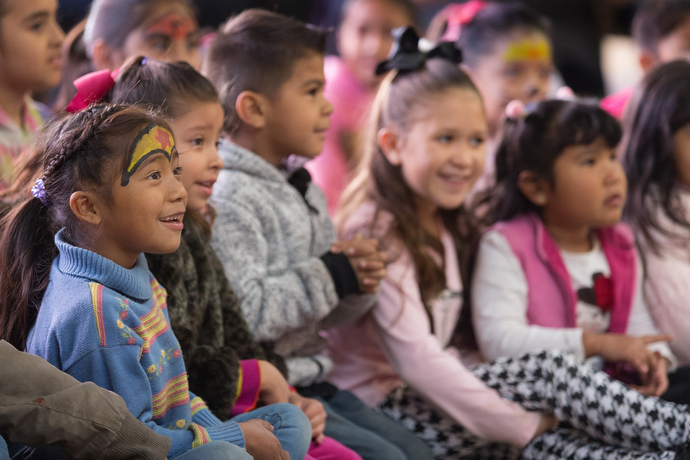 Children watch a skit during the Christmas party. 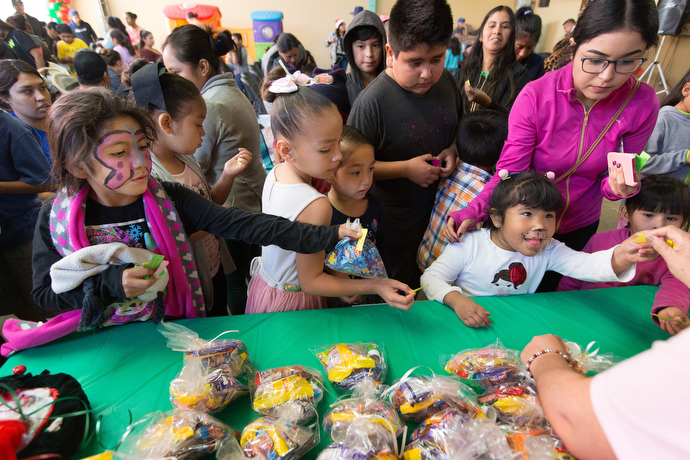 Children line up for treat bags at the Christmas party.
Bishop Felipe Ruiz Aguilar of the Methodist Church in Mexico greeted the children and led the group in a prayer. It was a moment of quiet in an otherwise rollicking time. Little faces painted with mustaches, superhero emblems, stars and spiderwebs bowed their heads. The children clasped their hands together to hear the bishop’s prayer.

There was no evidence of the hardships some of the children had undergone in their long, perilous journey to Tijuana. One young migrant mother watched as her little girl and boy played with the other children. The small family is from Guatemala and didn’t want to talk about their reason for being at the shelter.

This shelter is much nicer than those thousands of recent migrants are living in. The Methodist Church of Mexico works with the Salvation Army and other organizations to offer love and comfort. 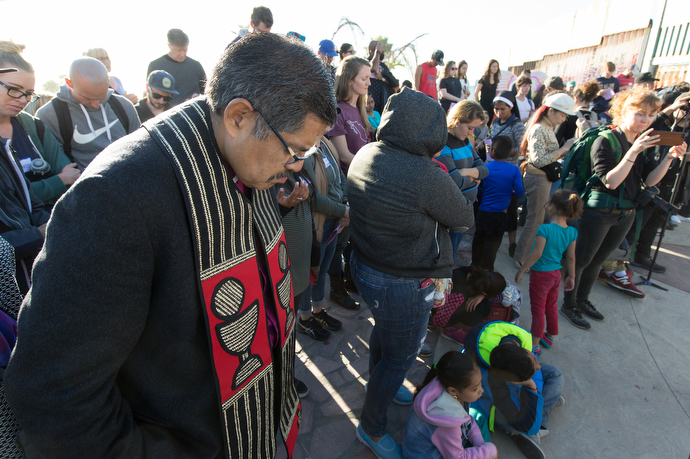 Bishop Felipe Ruiz Aguilar (left) of the Methodist Church of Mexico prays during the La Posada Without Borders celebration at El Faro Park in Tijuana, Mexico.
Ruiz Aguilar said God has placed a burden on him regarding the lack of attention people in authority show to people living in deplorable conditions.

“I find that there is a responsibility on our part to take care of these our brothers in great disadvantage,” he said. “Although we don’t have a ministry, such as shelters or community centers, the Methodist Church of Mexico, Northwest Conference, has a very strong participation in border cities.”

Ruiz Aguilar left the Christmas party to join with more than 200 gathered for La Posada Sin Fronteras (which means “The Inn Without Borders”) at the U.S.-Mexico border wall.

The Las Posadas tradition, popular in Mexico and increasingly in the U.S., commemorates Joseph and Mary’s search for a place to give birth to Jesus. 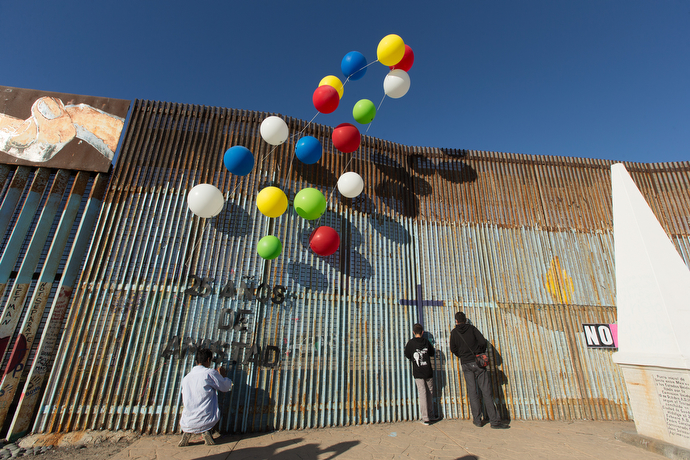 During a Posada celebration at El Faro Park in Mexico, people peer through the border fence that separates the U.S. from Mexico while a volunteer affixes a sign celebrating the 25th anniversary of La Posada Without Borders.
On the 25th anniversary of the first La Posada on the border, Friendship Park was closed and the hundreds gathered on the U.S. were held back about 90 feet from the looming border wall.

On the Mexico side, hundreds freely gathered and peered through the iron mesh to catch glimpses of friends and family.

“We are sad only half our family is here. Why? Why won’t they open the gate? Are they afraid of people of faith? Maybe it is because they are praying for a change of heart,” said Pat Murphy, director of Casa del Migrante en Tijuana, a nonprofit civil organization assisting migrants in his welcoming remarks. 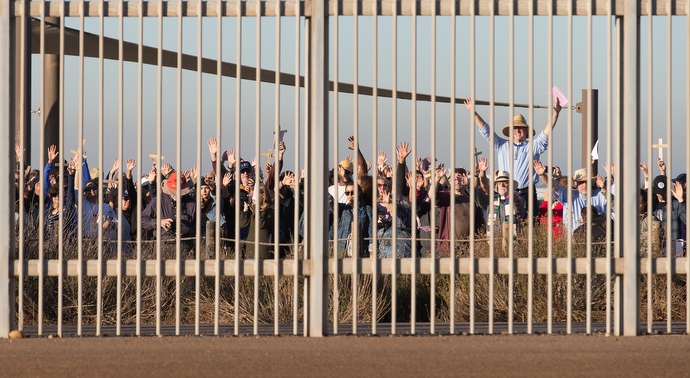 “For the first time, those of us who gathered in the United States were separated from those in Mexico by the strip of federal property, a distance of about 90 feet,” he said.

“Those of us who organize the event decided it was necessary to conduct what amounted to two separate events, one in Mexico and one in the United States, and only attempted to bring the gatherings together for the concluding, climactic song in which the two parties sing back and forth to each other,” he added. 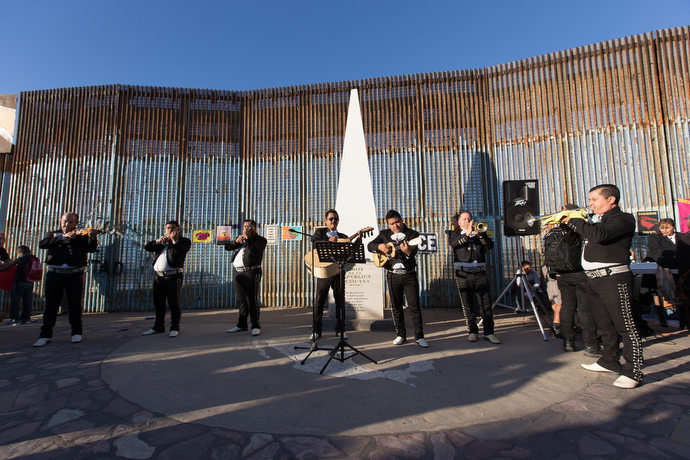 A Mariachi band plays during the Posada celebration at El Faro Park in Tijuana.

Bishop Grant Hagiya, who leads the California-Pacific Conference, took part in the program and spoke at a press conference.

He implored the church not to be afraid to accept and minister with migrants.

“The church cannot fear losing popularity or members or the powers that be. Our biblical mandate is so clear and compelling. Just as Mary and Joseph were turned away again and again, we the church must open our hearts and doors and welcome the stranger and immigrant in,” he during the press conference.

The Rev. Joel Hortiales, director of Hispanic/Latino Ministry and Border Concerns with the California-Pacific Conference, said the service was inspiring and hearing the chants from the Mexico side was “very emotional.”

Hortiales said that as the group walked back after the service, there were some people yelling at them, “Shame on you, you’re not Christians because you are supporting immigrants who do not respect the law.”

“But talking to people from Hispanic churches, they said they were blessed to be there celebrating La Posada,” he said. 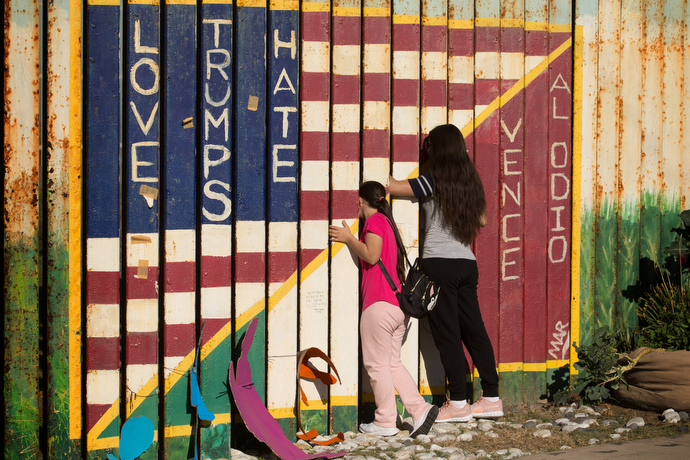 During a Posada celebration at El Faro Park in Tijuana, Mexico, people peer through a section of the U.S.-Mexico border fence that is decorated with a message of love in two languages.
Both sides read the names of more than 100 migrants who have died in 2018 trying to reach U.S. soil. Both sides sang Christmas carols, ending with the Posada Song, which tells the story of Mary and Joseph seeking refuge.

Fanestil said the larger themes of immigrant rights and the right to seek asylum influenced the event.

More than 300 faith leaders marched to the wall on International Human Rights Day, Dec. 10, in a “moral call for migrant justice.”

Fanestil said after the protest, the Border Patrol withdrew permission to hold the La Posada in Friendship Park. 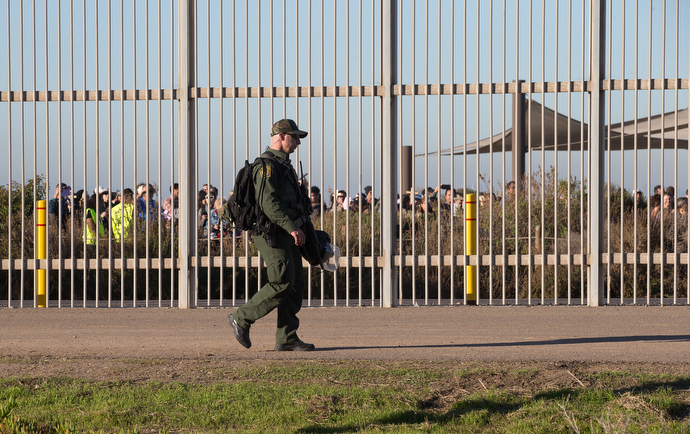 A U.S. Border Patrol agent walks through Friendship Park in San Diego, between the primary and secondary border fences that separate the U.S. from Mexico, during the 25th anniversary of La Posada Without Borders.
Friendship Park is usually open on Saturdays and Sundays. It is a small area where people can see and interact with each other through tiny openings in the mesh and bars of two steel fences.

Donate to: Global Migration Advance #3022144.
See more photos on our Flickr page.
The United Methodist Church and the Methodist Church of Mexico hold a joint communion service on each side on Sundays.

Border Patrol vehicles could be seen driving back and forth in the park during the La Posada service and a border agent walked the area.

The roots of the posada event is the celebration of the culture of hospitality that is indigenous to the borderlands,” Fanestil said. “That culture is being made more and more difficult to celebrate, but locals will make sure that it survives.”

Innocence was lost, but writer translated the trauma of the moment into new goals and dreams of helping others.
Faith Stories

Bishop John William Russell served various local churches and as a district superintendent before his election as bishop in 1980. In 1988, he became the first episcopal leader of the newly formed Central Texas Conference. Russell died Sept. 2.
Human Rights