As a historian, the Rev. Charles Yrigoyen Jr. helped countless people learn more about John and Charles Wesley and the Methodist movement they started.

As a pastor and professor, Yrigoyen helped countless people live out Wesleyan teachings.

The renowned United Methodist historian and beloved leader in his home Eastern Pennsylvania Conference died May 9 in Lancaster, Pennsylvania. He was 84.

“The Rev. Dr. Charles Yrigoyen was gifted and provided excellent leadership in everything he did,” said Bishop John Schol, who leads both the Greater New Jersey and Eastern Pennsylvania conferences.

The bishop — who like Yrigoyen began his ministry in eastern Pennsylvania — cherished his friendship with the historian.

“You just wanted to be around him because of his positivity, his intellect, commitment to quality, his warm smile and his love for God and the church.” 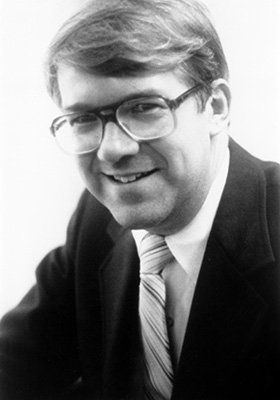 Throughout his ministry, Yrigoyen (pronounced YUR-i-gen) worked to make the story of Methodism accessible to all people — from seminary to Sunday school.

He was the author or editor of 11 books including “John Wesley: Holiness of Heart and Life,” a popular study with small groups across The United Methodist Church.

He also led the agency dedicated to serving as the denomination’s ministry of memory — collecting and preserving a treasure trove of church records and other archival materials for both scholarly and general use.

At Drew University’s invitation, a plan to move Archives and History to the United Methodist-related university was already in the works when Yrigoyen came aboard.

Yrigoyen made the move happen — overseeing the careful transfer of materials from Lake Junaluska, North Carolina, to Drew in Madison, New Jersey, where the collection could expand in a university setting near a major international airport.

While leading Archives and History, Yrigoyen taught at Drew and served on a number of dissertation committees.

In addition, he was a frequent speaker at United Methodist Women schools of Christian mission.

“You don’t replace Chuck. You only can succeed him,” said the Rev. Robert J. Williams, a longtime friend who followed Yrigoyen as the top executive of Archives and History. Williams, now retired, said he saw his role as making sure he did not damage any of Yrigoyen’s legacy.

“He was absolutely steady and dependable and thorough in all his work,” Williams said. “Whether it was at jurisdictional meetings with conference leadership or whether it was in academic settings, he was just well loved and respected wherever he went. He was gracious and kind and gentle.”

The Rev. Alfred T. Day III, another longtime friend and the immediate past head of Archives and History, said the agency gained prominence in The United Methodist Church thanks to Yrigoyen.

“All I could do was hope to emulate his significant and highly productive tenure,” Day said.

He described Yrigoyen as the original “Chuck Knows Church,” referencing a popular video series on church traditions by the denomination’s Discipleship Ministries.

“Coming home from some denominational meeting, I picked up a ‘Chuck Knows Church’ T-shirt,” Day recalled. “I sent it to him and he laughed. No one could wear that shirt with more truth and integrity!”

A celebration of Yrigoyen’s life will be held at 4 p.m. U.S. Eastern time May 14 at First United Methodist Church in Lancaster, Pennsylvania. A livestream of the service will be available here.

Yrigoyen grew up surrounded by Methodist history. Born Dec. 9, 1937, in Philadelphia — one of the cities where Methodism first took root in America — Yrigoyen was the son and namesake of a prominent Methodist pastor who eventually became a district superintendent.

The younger Yrigoyen also grew familiar with the Pennsylvania landmarks and development of the Evangelical Association and United Brethren Church — both forerunners of today’s United Methodist Church. However, the future church historian initially planned a career in railroad management before he discerned a call to ordained ministry. He remained a rail fan with special interest in the Reading and Pennsylvania railroads as well as the trolleys of eastern Pennsylvania.

Yrigoyen began in parish ministry before soon turning to teaching. He was a professor of religion and chaplain at United Methodist-related Albright College in Reading, Pennsylvania, for 14 years before heading to Archives and History. Albright College awarded him an honorary doctorate in 1987.

“He was one of the first people who modeled for me how you could be both a scholar of church history and a pastor,” said the Rev. William Lawrence, a scholar of American religious history who also grew up in Pennsylvania.

Lawrence earned his Ph.D. at Drew and eventually served as dean of Southern Methodist University’s Perkins School of Theology in Dallas as well as president of the Judicial Council, The United Methodist Church’s top court. He said Yrigoyen helped fellow clergy and academics to refine their thinking.

“He was such a conscientious scholar,” said Lawrence, who is now retired. “He really helped people to have a refined understanding of what we mean by minister and what it means to be in ministry in the broader Wesleyan theological tradition.”

In addition to his work with Archives and History, Yrigoyen was involved in efforts to promote the study of church history. That included serving on the board of the Wesley Works Editorial Project, an ongoing initiative to assemble the definitive collection of John Wesley’s sermons, journals and letters.

“I came to appreciate Chuck’s strong support of the Wesley Works Project, bringing both enthusiasm and wise perspective to our editorial board,” said the Rev. Randy Maddox, the project’s current general editor and a professor emeritus at Duke Divinity School in Durham, North Carolina.

“But I will remember most of all Charles Yrigoyen as a winsome soul and good friend.”

Neil Alexander, retired top executive of the United Methodist Publishing House in Nashville, Tennessee, worked with Yrigoyen as a publisher and as a fellow agency executive. Alexander said Yrigoyen never failed to keep his promises, meet his deadlines and “add more than a smidgen of wisdom.”

“He invariably teased our imaginations with his keen sense of how history illumines the present, and graced us with his genuine love of God and neighbor, guileless pragmatism and incessant good humor,” Alexander said.

Throughout his ministry, Yrigoyen not only stayed in touch with the roots of Methodism but also his own in eastern Pennsylvania. The Eastern Pennsylvania Conference admired him, too, electing him eight times as a delegate to General Conference, the denomination’s top lawmaking assembly.

Upon his retirement, Yrigoyen and his wife, Jean, made their church home at First United Methodist Church in Lancaster. The Rev. Joe DiPaolo, the congregation’s lead pastor and a fellow historian, called Yrigoyen “a Christian gentleman.”

Defiance of rules passed by General Conference goes back to the earliest days of the first Methodist denomination in the U.S. A United Methodist professor writes about why the current debate over homosexuality is driving a church separation.
Global Health