There’s a construction site across the street from the offices of United Methodist Men on Nashville’s Music Row, and it’s not unusual for blasting to interrupt the work day.

The city’s real estate market is booming, but Greg Arnold, the new leader of United Methodist Men, said he is keeping his options open regarding the future home of the agency dedicated to men’s ministry.

“Let’s see what happens,” Arnold said. “From a business perspective, the value of this property is appreciating faster … than it would be if we were to sell it and take the money and put it into some other investment account.”

On the other hand, if Arnold’s vision to expand the reach of the agency comes to fruition, the office could well be too small in as soon as 18 months.

“When this agency was formed, there was a commitment that it would be self-sufficient out of the gate,” Arnold said. “That didn't happen, and it hasn't happened for 25-26 years. However, the potential is there.”

Born in Scottsboro, Alabama, Greg Arnold is a graduate of the University of Alabama, where he met his wife, Rhonda. They have a daughter, Olivia, who is close to graduation from the University of Mississippi.
Olivia played a key role in Arnold’s transition from being a workaholic businessman to leading a more balanced life.
“I was physically, emotionally and spiritually just spent,” he recalled. “I was doing far more than I should have and took it all on my shoulders.”
Olivia surprised him during a rare week home with a question: “What are you doing here?”
“There is not a dagger hotter and sharper than that to put in a dad's heart,” Arnold said. He prayed for the revelation of his next step, and concluded that men’s ministry was his future.
“I'd already started men's ministry on the side just as a salve to the burden I was carrying,” he recalled. “I knew I was called to minister.”

If that sounds like a businessman talking, you’re on the right track. In fact, Arnold has extensive business experience to his credit, and also substantial work in men’s ministry in The United Methodist Church.

The combination makes him ideally suited to be the executive leading United Methodist Men in uncertain times. He succeeds Gilbert C. Hanke, who retired last year.

“Greg Arnold’s natural ability to lean towards innovation enhances The United Methodist Church’s ability to reach men and offers opportunities for men to grow into strong disciples of Jesus Christ that will change this world,” said Mississippi Bishop James E. Swanson Sr., who is president of the United Methodist Men Commission, in a statement.

The way Arnold sees it, every one of the millions of men in the denomination needs to be served, if possible. Of the more than 32,000 United Methodist churches in the U.S., only about 3,500 pay $85 annually for a UMM charter, he said.

“So what are we doing to serve every single one of those souls?” he said. “If we can make that happen, then there's not a building that can contain us.”

His strategy is to offer United Methodist men escape from isolation by creating communities they wish to join.

Arnold, 51, brings substantial and varied experience to the new position. The failures are as important as the successes, he said.

One turning point came when Arnold purchased a radio station in Ocean Springs, Mississippi. After putting much work and resources into the project, he lost it after Hurricane Georges temporarily silenced the station in 1998.

“I did not review and work under the contract as well as I should have,” Arnold said. “The purchase agreement had some loopholes that I didn't enforce or look at as a hurricane came through and knocked the station off the air.” 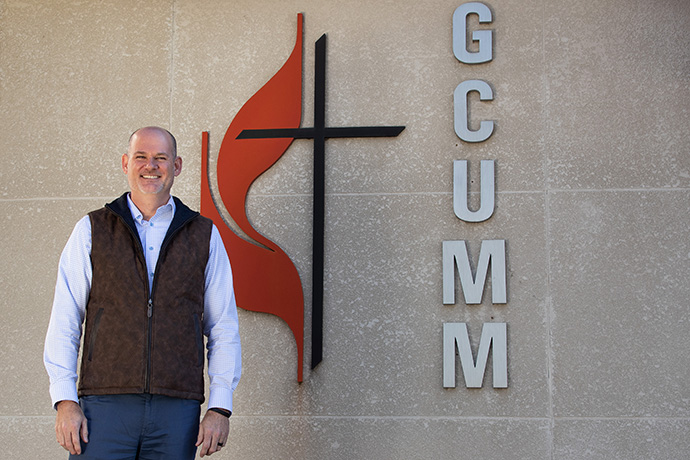 Greg Arnold has plans to expand the reach of the United Methodist Men. Photo by Mike DuBose, UM News.

After skipping some payments with the blessings of the former station owner, Arnold said the former owner seized the station back, citing a measure in the contract regarding missed payments.

Still smarting from the radio station saga, Arnold was recruited to fill in as an advertising buyer by someone he met while teaching Sunday school. That led to a job doing marketing and development for a health care company and later his founding of Nexus Therapy Management, which provides physical, occupational and speech therapy in nursing homes.

That company, of which Arnold is still president, now operates in Texas, Oklahoma, Mississippi, Louisiana and Arkansas. His team got so proficient that Arnold was able to simultaneously take on duties as a deployed staff member of the United Methodist Men Commission, based in Mississippi. He did that for 12 years, mostly as a volunteer, before resigning to head the men’s agency.

Among Arnold’s plans are:

Arnold terms his new position as “a burning call” rather than a job.

“I knew that no matter whether it was in this role or not, I would continue to serve the agency in the church at whatever capacity was needed,” he said. “The successes I've had in business, they seem to parallel what United Methodist Men could use moving forward, especially at a time when the church is looking at … coming out of a pandemic.”