Just before Easter, the Rev. Gregory Neal sent an email to his church members, encouraging them to prepare a little home altar, complete with a pinch of bread or hotdog bun, and a little juice or wine.

On the big day, Neal stood before a camera and led First United Methodist of Farmersville, Texas, through online communion. He was thrilled to do it, since his church and so many others are unable meet in person because of the coronavirus threat.

“When we’re isolated into little pockets and we can’t commune together physically, that is when we need that metaphysical indwelling grace of Jesus even more,” Neal said.

At First United Methodist Church in Chula Vista, California, the Rev. Brian Parcel has chosen not to offer communion during the COVID-19 quarantine. He believes Scripture and United Methodist doctrine require clergy and congregations to do communion together, in person.

The church ordinarily observes communion every week at two of its three services — “It’s the center of who we are,” Parcel says — but is on a communion fast until restrictions on gathering lift.

“It’s going to be a very sacred and somber moment, because people will realize what they’ve been missing,” he said.

The COVID-19 pandemic, consequential in so many ways, has prompted debate about and experimentation with online communion across The United Methodist Church.

Bishops have weighed in differently about the practice. Liturgical scholars have fought to have their cautions heard. Pastors have had to decide what is right for themselves and their congregations.

The arguments pro and con have been all over websites, blog posts, podcasts and social media.

Discipleship Ministries has recently offered guidance and collected resources on the subject.

Florida Conference Bishop Kenneth Carter wrote an essay about online communion, presented to the denomination’s Committee on Faith and Order in 2014.

The Louisiana Conference has done a podcast on the online communion controversy, featuring the Rev. Juan Carlos Huertas. The podcast includes a poem on the subject by the Rev. Matt Rawle.
If there’s common ground, it’s in recognizing that communion has come to be practiced more in United Methodist churches in recent decades, and that it matters more to clergy and laity.

“That’s one of the things that makes this harder,” said the Rev. Mark Stamm, professor of Christian worship at Perkins School of Theology and author of a paper on COVID-19 and online communion. “But it’s a good thing.”

Communion, also known as the Lord’s Supper and the Eucharist, joins baptism as the two sacraments recognized by The United Methodist Church.

Experimentation with communion is not new to Methodism.

On May 24, 1938, Bishop Garfield Bromley Oxnam made national news by using a radio broadcast to read the communion ritual to 50,000 Methodists gathered in 1,500 Midwestern churches. Their pastors then offered them communion — something many of the pastors couldn’t then have done without the bishop’s help, because they were not ordained.

United Methodist understanding of communion is captured fully in a document titled “This Holy Mystery,” which was adopted by the 2004 General Conference and stresses the importance of the gathered body observing the sacrament together.

Though the internet was well along in use by then, the document was not written with the possibility of online communion in mind, said the Rev. Ed Phillips, associate professor of worship and liturgical theology at Candler School of Theology. He chaired the United Methodist Holy Communion Study, which produced “This Holy Mystery.”

By 2013, with many churches using the internet to broadcast recorded or livestreamed services, Phillips was leading a United Methodist study group on online communion. After considerable discussion and exchange of scholarly papers, the group recommended a moratorium on the practice. The Council of Bishops supported that.

Fast forward to March 2020, when across much of the U.S. and the world, the spread of coronavirus forced an unprecedented closure of public places, including churches.

Within weeks, thousands of United Methodist churches debuted online worship, or enhanced existing online offerings. The rush to the internet occurred just before Holy Week, when many churches celebrate communion on Maundy Thursday and Easter.

Bishops suddenly faced the question of whether to approve online communion. 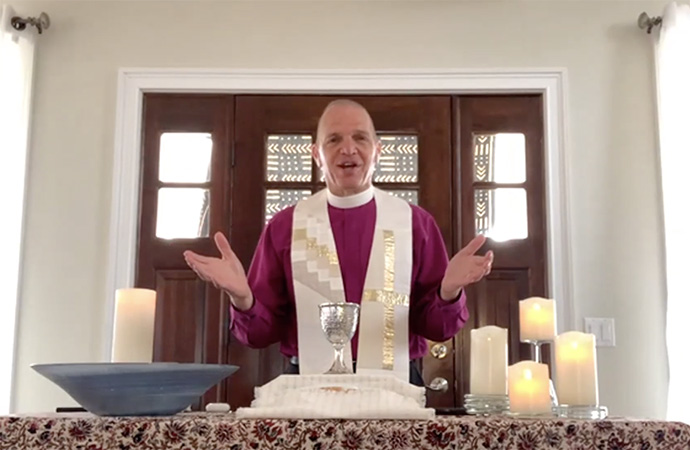 Bishop John Schol leads communion during a Zoom conference in the Greater New Jersey Conference. Screen shot courtesy of the Greater New Jersey Conference.
The five bishops in the Western Jurisdiction, where the coronavirus emerged early in the U.S., issued a March 24 letter saying online communion would be permitted while meeting restrictions lasted.

“We are not prescribing that Holy Communion be celebrated in all our congregations in this time of social distancing,” they said. “However, we stand with our clergy who through reflection and prayer have come to the place of believing that their congregation would be strengthened in this hour through the sharing of Holy Communion.”

West Ohio Bishop Gregory Palmer and his cabinet collaborated on an essay arguing that, from the 16th century bubonic plague forward, dire emergencies have called for adjustments in Christian practice. Other bishops have cited the West Ohio paper in their decision to allow online communion.

A check by United Methodist News found that a majority of bishops in the U.S., and some in Africa, Europe and the Philippines, have permitted communion while coronavirus-related restrictions are in place.

Susquehanna Conference Bishop Jeremiah Park at first told his clergy not to offer online communion, then reversed course after more prayer and discernment with his cabinet. He pointed to John Wesley.

“He offered the means of grace outside the normal practice of the Church of England in his time,” Park said. “This is one way of doing that.”

Other bishops have advised or instructed clergy not to offer online communion, suggesting other practices, especially the Love Feast, a Christian fellowship meal that recalls the meals Jesus shared with his disciples.

“Christians have in fact experienced pandemics like this one in the past and we have simply suspended the practice of Holy Communion during those times,” he said.

Western Pennsylvania Conference Bishop Cynthia Moore-Koikoi said one reason she decided against approving online communion was because of the emergency period.

“I know from my background in psychology that we don’t make our best decisions as human beings when we’re under stress,” she said. “This might not be the best time to change our perspective on the theology around communion.”

Neither Jones nor Moore-Koikoi would second-guess colleagues.

“We’re all doing the best we can,” Moore-Koikoi said. “Nobody taught us how to bishop in a crisis like this.” 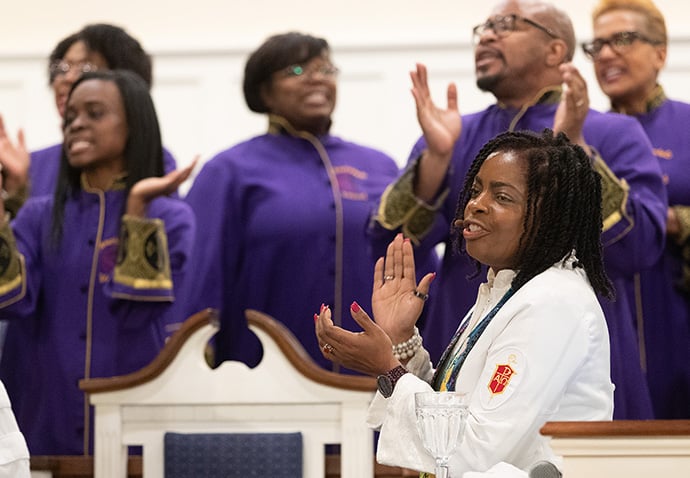 Bishop Cynthia Moore-Koikoi sings with the choir at Ben Hill United Methodist Church in Atlanta during a worship service at the Black Methodists for Church Renewal meeting in April 2019. Moore-Koikoi has steered the Western Pennsylvania Conference away from having online communion during the COVID-19 emergency. File photo by Mike DuBose, UM News.
Central Texas Conference Bishop Mike Lowry retracted his support of online communion, noting he had re-thought after reflection and reading, including a commentary by Justus Hunter of United Theological Seminary.

Lowry took himself and other bishops to task.

“Reflecting upon my personal actions or the actions of other bishops, the way we have handled this issue, both individually and collectively as bishops, highlights the theological poverty of the UMC,” Lowry wrote.

Meanwhile, United Methodist liturgical scholars — specialists in the sacramental life — have been part of the debate.

Thirteen of them signed a letter to the bishops last month. Phillips helped organize the effort, as did the Rev. Karen Westerfield Tucker, professor of worship at Boston University School of Theology.

“The intention of the letter was to express concern about the ecclesial, theological, pastoral and ecumenical consequences of the permission for, even encouragement of, online communion made by some of the bishops,” she said.

Ryan Danker, associate professor of church history and Methodist studies at Wesley Theological Seminary, took his argument against online communion public in an essay posted on the Baltimore-Washington Conference website.

“According to United Methodist doctrine and liturgy, we believe that the real presence of Christ is available by means of bread and wine within the gathered community, administered by ordained or licensed clergy,” he wrote. “Every aspect of that sentence is necessary in order to have communion.”

The Rev. Owen Ross, director of church development for the North Texas Conference, has countered with his own essay titled “10 Reasons for Online Communion.” Ross argues, among other things, that online communion extends spiritual “manna” to people who can’t get to church.

At the local church level, unanimity is elusive as well.

Rex and Sandy Jobe have relished Wednesday online communion services offered during the quarantine by their church, Highland Park United Methodist in Dallas. 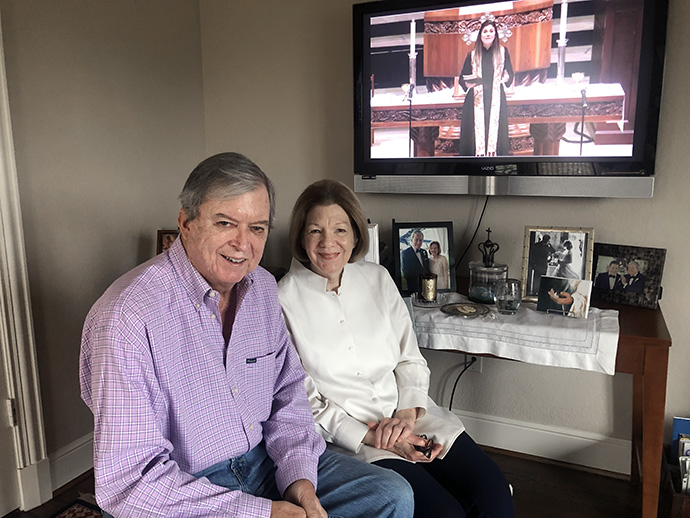 Rex and Sandy Jobe take part in an online communion service offered during the quarantine by their church, Highland Park United Methodist in Dallas. Photo by of Rex Jobe.
“It has been very special to us, to remember Christ and what Christ has done in our lives,” Sandy Jobe said.

But the Rev. Joyce Proctor, pastor of Grace United Methodist Church in Brooklyn, Iowa, led online communion at Easter and deeply missed being able to call parishioners by name and hand them the elements.

“It was a lonely communion,” she said.

The Rev. Jeff Coleman has led Sugar Hill United Methodist Church, in Sugar Hill, Georgia, into much more frequent observance of communion. When this emergency arose, he and his staff decided to do online communion, working up a kind of best practices guide that has been shared by the North Georgia Conference.

“We tried to be theologically sensitive, knowing we were going to have friends and colleagues who disagree with us,” Coleman said.

Phillips, the Candler professor, says it’s time to look forward. He’s working on a short-term project, involving health experts and a range of church leaders, to develop protocols for safe observance of the sacraments when churches can again meet together.

He wants a later meeting to consider the future of online communion for United Methodists.

“I don’t want to complicate this for laity and pastors who are operating in good faith,” he said. “Let’s think about it afterwards and decide whether it was a good thing when we have a little time away from the crisis.”

What began as a small way for Booneville United Methodist Church to reach out to the community has blossomed into an annual event attracting hundreds.
Mission and Ministry