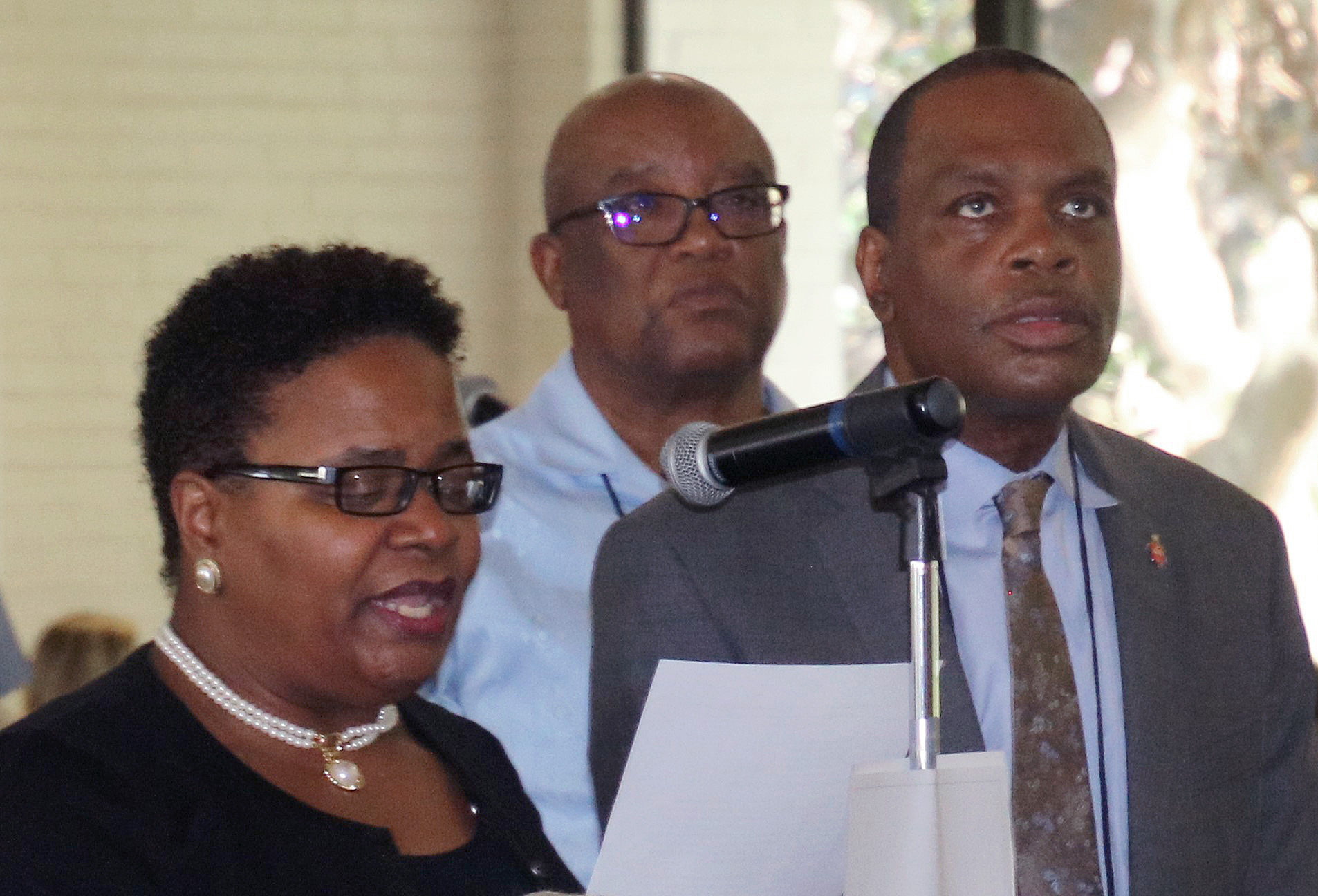 Bishops LaTrelle Easterling and Leonard Fairley present a statement that deplores the surge in racism in the U.S. Bishop W. Earl Bledsoe looks on. Photo by the Rev. Maidstone Mulenga, Council of Bishops.

United Methodist bishops decried the rise of racism in the U.S. and recommitted themselves to “exposing and dismantling racism in whatever forms and wherever it presents itself.”

The Council of Bishops, in a unanimous voice vote, adopted this statement drafted by the denomination’s active and retired African-American episcopal leaders.

“Racism is so insidious that often those who are in bondage to it are not even aware of their chains. It is a persistent sin and evil that infects all it touches,” the statement said. “We are grieved that a culture of racism is institutionalized even in our beloved denomination.”

The bishops released the statement just weeks after two recent shootings in the U.S. — of African-Americans in a Kentucky grocery store and Jewish worshippers in a Pennsylvania synagogue — that are being investigated as hate crimes. The suspected gunman in Pittsburgh not only ranted anti-Semitic slurs but also appeared to fixate on the Hebrew Immigrant Aid Society’s work with asylum-seekers.

The bishops are addressing a trend that goes beyond recent tragedies. The number of hate crimes in the 10 largest U.S. cities spiked in 2017, according to the Center for the Study of Hate and Extremism at California State University. This marked four straight years of such incidents on the rise.

“We pledge to hold United Methodists, particularly those in the United States, accountable to engage in education around white supremacy, white privilege and internalized racism,” the bishops’ statement said. “We recognize that until our Anglo brothers and sisters are free of their racism and acknowledge their white privilege, none of us will be free.”

Bishops Leonard Fairley of the Kentucky Conference and LaTrelle Easterling of Baltimore-Washington presented the statement to their episcopal colleagues. The two co-lead the denomination’s Ebony Bishops.

Easterling told United Methodist News Service that church members should absolutely discuss recent acts of violence, but she hopes they will go beyond the most brutal crimes.

“We should also be hearing about people suffering from what some would consider micro-aggressions,” she said. She pointed to incidents such as when law enforcement have confronted African-Americans trying to enter their own homes or an African-American student napping in her dorm’s common room.

“When you put all of this together coupled with the dog-whistle politics that we hear right now going on in this nation’s election season … that is what caused us to want to make a statement,” Easterling said. 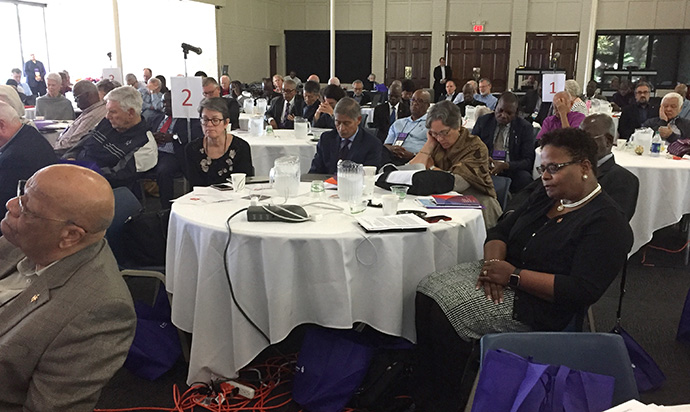 United Methodist bishops silently reflect on an anti-racism statement decrying the rise of prejudice in the U.S. The Council of Bishops, in a unanimous voice vote, affirmed the statement that was drafted by the denomination’s active and retired African-American episcopal leaders. Photo by Heather Hahn, UMNS.

Bishops have issued statements against racism in previous years, but usually only after some discussion. This time, after a moment of silent reflection, bishops immediately moved to affirm the statement.

North Georgia Conference Bishop Sue Haupert-Johnson moved that the statement be included in the work of the bishops’ Anti-Racism Task Force. “I also want to personally acknowledge my complicity in white supremacy,” she said.

North Carolina Conference Bishop Hope Morgan Ward told the bishops the task force was already including the statement in its work.

Indeed on Nov. 7, Ward announced the group’s plans to rename itself the Dismantling Racism Task Force.

Ward told her colleagues that the group plans to help dismantle racism in three ways. Those include strengthening interracial relationships within the denomination; creating a central place where bishops and others can exchange ideas and increasing the capacity to name the reality when racist action occurs.

A majority of bishops have already made confronting racism a priority in their areas.

Easterling said she expects the work to go beyond words on paper.

“It’s sort of like when we tell people our thoughts and prayers are with you. Those are important words, but they are without power if no action follows them,” she said.

She said the Ebony Bishops plan to produce resources that bishops can use in their areas to educate about white supremacy.

Also on board is the United Methodist Commission on Religion and Race. Erin Hawkins, the agency’s top executive, said her team aims to help United Methodists confront racism with dialogue, training and resources.

The next step will happen during the active bishops’ Nov. 7-9 learning retreat, which will focus on using “fearless dialogues” to defeat racism.

Bishop Kenneth H. Carter Jr., the Council of Bishops president, said he appreciated the call from the Ebony Bishops to address hateful rhetoric and other actions that do harm.

“They were calling us to name that — both the suffering of African-American communities and the complicity of white privilege,” said Carter, who also leads the Florida Conference. “I think in many areas, our bishops have led on this.”

He added that he hopes it helps encourage fellow bishops to continue their efforts.

“We do confess Jesus Christ as our Savior,” the bishops’ statement concluded. “We put our whole trust in his grace, and promise to serve him as our Lord, in union with the Church which Christ has opened to people of all ages, nations and races.”

Asian and Pacific Islanders in the United States have continued to face racism from governmental actions and white supremacy since at least the middle of the 19th century. United Methodists are called in baptism to resist these and all forms of evil, injustice, and oppression.
Racism

A native of Puerto Rico, the Rev. Giovanni Arroyo knows firsthand what it’s like to be a minority in America, and that experience informs the way he pursues his mission as The United Methodist Church’s point person on inclusion.