A group of excited, sickle-armed farmers, mainly women from the Bandakor Village community, sweated and sang in the scorching heat of a January afternoon as they lopped swaths of rice stalks from the ground.

They bent their knees as they picked up the weak stalks bearing the dry grains — an unusual way of harvesting rice, even by traditional standards.

The farmers were harvesting the first yields of the Bishop Yambasu Agriculture Initiative farm in the Gbondapi farmlands in Pujehun, southern Sierra Leone, where 75 acres were cultivated in 2021. The process of manual harvesting is slow, especially in the heat.

The initiative is a pilot project launched by the United Methodist Board of Global Ministries two years ago. It is named in memory of Bishop John K. Yambasu of Sierra Leone who was instrumental in starting the effort to improve food security and strengthen farm communities across the continent. He was a fervent believer that United Methodist conferences in Africa can be self-reliant through agriculture. Yambasu died in a road accident in 2020. 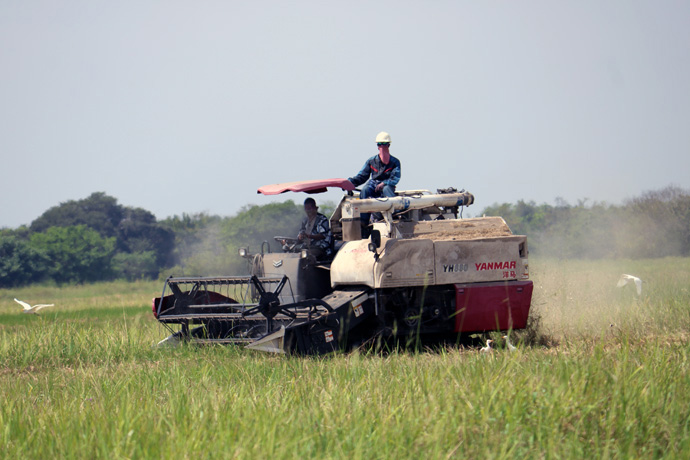 A combine harvester works the fields at Gbondapi farmland in Pujehun, Sierra Leone, saving the farmers’ time and energy. Mechanized farming is not new in Sierra Leone, but it used to be a privilege enjoyed by only a few farmers. The news that the Bishop Yambasu Agriculture Initiative will be using machinery to cultivate, harvest and mill rice in the new planting season has excited farming communities to support the program. Photo by Phileas Jusu, UM News.

On the far end of the farm, a combine rice harvester was rolling in millions of the fallen stalks and separating the grains almost a hundred times faster than the 30 local farmers working together.

The Rev. Machael Columba, Pujehun District superintendent and project coordinator for the district, explained why he engaged the local farmers when a combine harvester was doing the job.

“The people you see using sickle and knife are the normal harvesters,” he said, “because the combine harvester comes on hire and is hardly available, even where we have the hiring fee.” To get it to come a second time, Columba had to try several times. Waiting for the harvester indefinitely would increase postharvest loss, he noted.

“The communities have been harvesting while we negotiated for the harvester to come. The combine harvester, more or less, is helping the people to do the harvest.”

He was right. In Freetown, the agriculture program coordinator, the Rev. Solomon Rogers, understands the problems in the field and said that much of the $200,000 received from Global Ministries last year was being used to purchase machinery to ease and fast-track cultivating, harrowing and harvesting.

The initiative cultivated more than 150 acres of rice farms in Moyamba and Pujehun districts. That may significantly increase in the coming farm year when the necessary equipment is available at the beginning of the season.

“About three-fourths of the funds went into machinery,” he said. “The rest went into agricultural supplies, inputs like fertilizers and seeds.”

Rice farming in the Gbondapi area started last year, but productivity was low, according to Columba. This, he said, was mainly due to unforeseen circumstances. They were farming in an area with unique challenges. 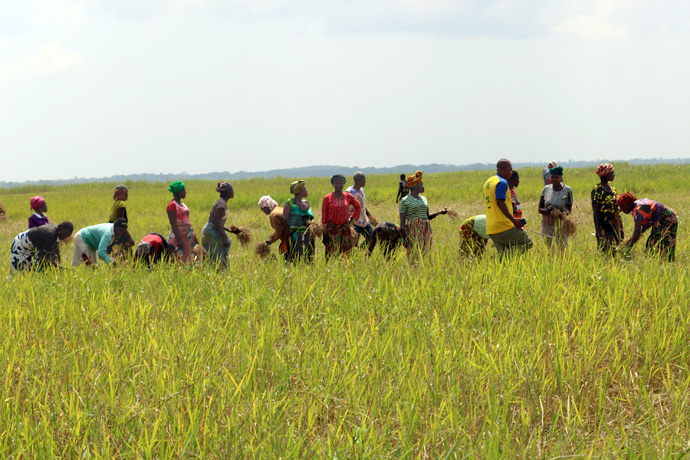 Farmers from the Bandakor Village community fan out in a line as they harvest rice on the Gbondapi farmland in Pujehun, Sierra Leone. The group was harvesting the first yields of the Bishop Yambasu Agriculture Initiative farm, where 75 acres were cultivated in 2021. Photo by Phileas Jusu, UM News.

Unlike the situation in other parts of the country, the Gbondapi farmlands flood throughout the rainy season when the rice plant is about a foot tall. Tilling the land and planting are done before the farms are flooded; harvesttime coincides with the dry season when floodwaters have receded completely. With manual labor, harvesting is slow because the grains fall to the ground as the floodwaters recede, causing postharvest losses.

Using their own equipment and having secured more land, the farmers have high hopes for the next farming season. “This year,” Rogers said, “we are extending to Tonkolili District in the Magbass area, where we have secured another 200 acres to plant rice.

“We have bought tractors for plowing and harrowing,” he continued. “Two rice-milling plants are being installed in Gbondapi and Taninahun. We also have bought a truck to convey all our implements and, in the future, our harvests as well. We already have the funds laid aside for the purchase of a harvester. What we are doing now is arranging the procurement processes to purchase one more tractor and a harvester.”

Donations can be made to the Bishop John K. Yambasu Agriculture Initiative through Advance #982188.

Both the church and the community benefit from the project.

“We support the farming communities where we work,” Rogers said. “Using machinery, we plow vast extensions of farmlands for them and provide seedlings and chemicals for weeding. The pilot phase we invested in last year was promising. In Taiama alone, where we cultivated 19 acres of land using hired machinery, we harvested about 156 bushels of rice.”

The project has started other initiatives on a small scale.

“For Pa Loko in the Waterloo-Freetown rural area,” Rogers said, “we are engaging locals in vegetable farming and animal husbandry.” If that pilot phase proves promising, they will expand the effort.

Asked how he hoped the agriculture initiative would benefit his community, Lahai Mansaray, the Bandakor village chief, said “We are already benefiting. The initiative cultivated and plowed extra acres of farms for the community. They hired the plows and provided the seeds.  All we did was to help in broadcasting the seeds.” Broadcasting is scattering seeds over a broad area, rather than sowing in furrows.

“This year,” Mansaray added, “we hope to cultivate more because the project now has more machines. We have also asked Rev. Columba to support our vegetable farming. That way, our livelihoods are diversified and income improved.”

Mansaray was excited to learn that the project is buying a harvester that would relieve them of having to harvest using sickles. He desires a boat in the future because most of the farming communities live on small islands around the sea. In the rainy season, they can only travel by boat.

“Previously,” he said,” we relied on manual labor using hoes and the sickles we are using today. But with mechanized farming, the hope for the future is bright.”