Asian-American clergywomen should think of themselves as global leaders, not just leaders in their own communities.

That was the message from the Rev. HiRho Park, who preached during the Ohana Conference, held July 9-11 at Christ United Methodist Church.

“Jesus is the ultimate global leader, and we reflect on being a global leader after a model of Jesus the Christ,” said Park, the executive director of the United Methodist Board of Higher Education and Ministry. “Now we are aware of what it is to be an effective Christian global leader.”

“What is one simple thing that you can do differently to influence others as an effective Christian global leader?” Park asked. “With awareness comes responsibility … responsibility to act.”

The three-day conference included seminars and workshops. Asian-American clergywomen from across the country had fellowship, prayed, sang songs and hymns and had fun activities as well.

“This is the first time that clergywomen of Pan-Asian and Pacific-Islander backgrounds were able to come together as one body and create a platform,” said the Rev. Sunny Ahn, a Korean-American clergywoman who serves at Kona United Methodist Church in Hawaii. “Through this conference we are able to make our unique voice heard and share our stories in worship and fellowship.”

The Rev. Hannah Lee, Greater New Jersey Conference, enjoyed the praise songs led by the Tonga women worship band. “I was touched spiritually when we wrote down our prayer concerns and made a prayer chain,” she added. “We were there as women clergy sharing the same desire to serve God through our calling. Our prayers and concerns were all about the congregation that we minister. I am not alone.”

The Rev. Fuxia Wang, an ordained elder of the Oklahoma Annual conference and a Global Ministries missionary, is serving as an international director at OU Wesley. She is also one of the co-chairs of AAPIC. She came to Honolulu from China where she had a mission trip. She was excited to see the Ohana conference come to fruition.

“We are from different ethnic backgrounds, connected through corporate worship with Holy Communion,” says Rev. Wang. “I'm excited that the words of the Scripture have been fulfilled through the Ohana conference: ‘The Lord announces the word, and the women who proclaim the good news are a mighty throng.’ (Psalms 68:11).”

Young Eun Kang of the New England Conference, a student at Gordon Conwell seminary  who is married to a pastor, was overjoyed to be with so many other clergywomen at the conference.

“I met several wonderful role models and great figures I want to be,” she said. “Through this fellowship, God opened my eyes, extended my world view and allowed me to have more confidence to follow God's calling.”

The Rev. Julia YH Yim, the Long Island East District Superintendent, New York Conference, said she was particularly moved by Bishop Grant Hagiya’s expression of “deep remorse about the Japanese atrocities toward Korean comfort women” in his sermon during the opening worship. 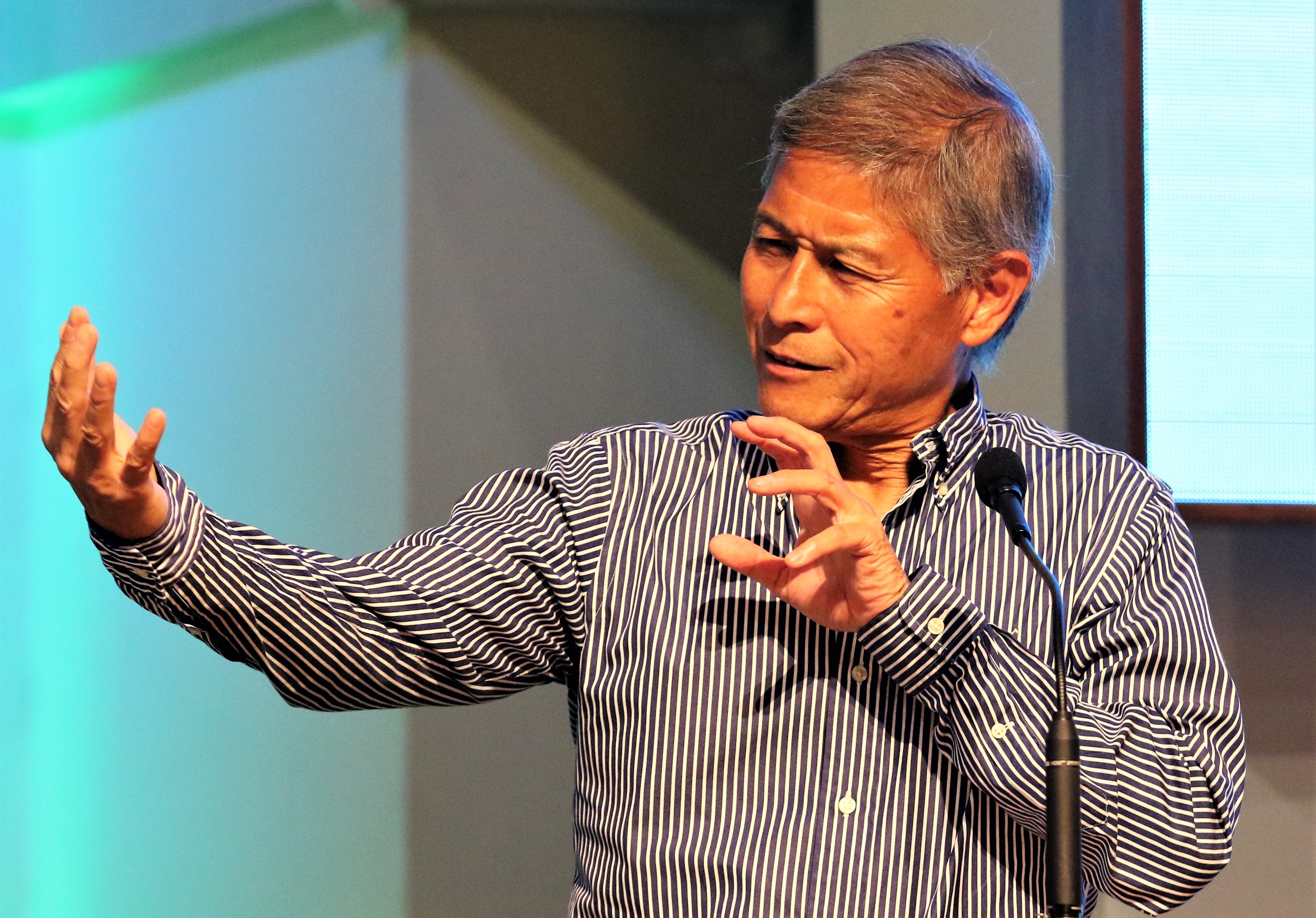 Bishop Hagiya preaches at the opening worship service during the 2018 Ohana Conference. Photo by the Rev. Thomas Kim, UMNS.

Bishop Grant Hagiya, who oversees the California-Pacific Conference, highlighted the struggles of being an Asian-American woman. “As women, you bring the story of your gender, and unfortunately you know the pain and anguish of sexism,” he pointed out.  “As Asian-American women, you know the double curse of both racism and sexism, either of which can destroy or limit our God-given potential.”

For such a time as this, what are challenges that Asian-American clergywomen have encountered, and how are they overcoming them?

Ahn describes her ministry of 19 years in The United Methodist Church as playing a baseball game. “The challenge I face in ministry always comes in three — because I am Asian, a woman, and also ‘young’ compared to many others in ministry,” she explained.

“This means I am undermined until people get to know me. In other words, I would say that I start the ministry with three strikes already. However, before the ministry is over, around the 7th inning (7th month), the people and I start to sing the “stretch song” together and enjoy the ministry.”

Lee recalled how, as she was finishing her degree program at Drew, a church's Pastor Parish Relations Committee chose not to interview her because she was a woman.  “At other times, I face discrimination due to my ethnicity and cultural differences. However, God always makes everything beautiful and uses even harm as learning moments for me to grow and to mature.

“Trials make me disappointed but they cannot defeat me because of my calling,” she said. “The more challenges I face, the stronger a Christian I become in the Lord.”

The Rev. Sandra Bonnett-Kim of the New England Conference was born in Korea, raised in Canada, and has been living in the United States for the last 26 years.

“When I was co-pastoring with Travis, my husband, they referred only to him as the pastor and I was just the pastor’s wife,” said Bonnett-Kim, who was lelected president of the Association of Asian-American and Pacific-Islander Clergywomen during the conference.  “Even during meetings, when I suggested things, they would turn to Travis and ask what he thought.  These are just some of the issues I have dealt with in the last 23 years of my ministry.”

Bishop Hagiya affirmed Park’s call to women’s leadership, praising their gifts of multiculturalism, compassion and relationship-building. “However, all the negative elements from your other stories also come with ministry: racism, sexism, inequality and unrealistic expectations,” he said.

Park encouraged those attending the conference, noting that the Asian-American and Pacific-Islander clergywomen are already community builders, strong nurturers, committed educators and compassionate listeners, who respect authority and are persistent goal achievers because of the influence of Confucianism.

“We are community oriented leaders,” she said. “These gifts are what we can offer to the denomination in this time of dissention and separation from one another.”

During the closing worship service, the Rev. Sehee Han, Hawaii District Superintendent of the California-Pacific Conference, said to them, "Put out into deep water!”

She told the story of Mary Scranton, the first foreign female missionary to Korea, sent by the Women’s Foreign Missionary Society of the Methodist Episcopal Church in 1885. At the time, Han pointed out, women were not even recognized with their own names in Korea but as someone’s daughter, sister, or mother.

“Scranton began to provide Christian education to women and girls, and founded Ewha Girl’s School in 1886,” she said. “It’s now known as Ewha Women’s University, and it’s one of the most prestigious Women’s Universities in Asia.  Mary Scranton’s teaching and gospel helped Korean women discover who they are and where they belong.”

History “is always leading us somewhere,” Han concluded. ”Our glory as God’s children is always yet to come.  I hope that we will be a ‘sign of hope,’ and open doors for women, especially in leadership to have equality in the church and beyond the church.”

Kim is the director of Korean/Asian news of United Methodist News Service in Nashville.

Contact him at 615-742-5470 or [email protected]. To read more United Methodist news, subscribe to the free Daily or Weekly Digests

Despite being denied an education as a girl, she went on to become a nurse and leader in The United Methodist Church in Zimbabwe in her role as an African bishop’s spouse.
Faith Stories

Kit Evans-Ford, one of the Wesleyan Investive Tom Locke Award winners for 2022, started an organization to employ female survivors of sexual violence.
Racism

A native of Puerto Rico, the Rev. Giovanni Arroyo knows firsthand what it’s like to be a minority in America, and that experience informs the way he pursues his mission as The United Methodist Church’s point person on inclusion.