In times of hardship, the church is needed more than ever to transform individuals as well as communities with the gospel of hope and to advocate for social justice.

Perhaps that is why — despite social, economic and political challenges — The United Methodist Church in Zimbabwe continues to strive for financial sustainability, raising funds within membership.

People share whatever they can. Rather than giving up in despair, “they work together within the difficulties of their economy,” said the Rev. Alan Gurupira, administrative assistant to Bishop Eben K. Nhiwatiwa, Zimbabwe Episcopal Area.

Because of economic sanctions, Zimbabwe cannot trade freely. People struggle to make ends meet. Yet, people give to the church, and God turns tiny offerings into gigantic mountains.

Above all, the church’s ministry and service continue to yield positive results nationwide. 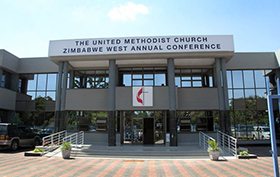 In order to sustain the church, leaders develop strategies that guarantee long-term commitment and contributions. Mutsa Mujaji, Zimbabwe East Conference finance and administration chair, stressed that the church’s main source of funding is its membership. Members contribute for its development and survival with plans for the church to be self-supporting.

Historically in Africa, missionaries initiated and managed church projects with the aim of spreading the Gospel. This resulted in dependence on missionaries. As mission structures changed, the church was forced to become more self-reliant and to mobilize resources from within.

People give because they are aware of the need to give and the difference their contribution will make in the church’s mission, Mujaji said.

Remittances made by circuits are key to the financial well-being of districts and the conference. Members’ tithes, pledges, offerings and harvest and thanksgiving gifts are shared proportionally based on set percentages. The United Methodist connectional system is vital to the church’s financial health.

Zimbabwean United Methodists, like church members around the globe, also help pay for United Methodist bishops and other ministries of the global church through apportionments.

“The strength of The United Methodist Church in Zimbabwe and the world over is determined by the level of strength of the links that connects all the organs and parts of the church,” Mujaji said. “When the links that form the connection are weak or threatened, the whole church is under threat.”

Money is an important issue, he added, because attitudes toward it determine a person’s relationship with God, fulfillment of life purpose and character.

“For that reason,” Mujaji said, “we gather from time to time to discuss how, as Christians, we must deal with money issues in our church.”

Sunday offerings have been maintained since early missionary days. Celebrating the offering is a spiritual act of worship in which every believer actively participates. “Giving becomes a celebration when the believer discovers the joy of generosity, which grows out of God’s grace,” Mujaji explained.

Members thank God for new babies in the family, children’s academic success, new jobs and encounters of grace. As a result, thanksgiving has become a part of every worship service.

“We may think our financial resources are our own,” Mujaji said. “But when we recall that the time, the energy, the good health and the opportunities for employment behind these dollars are all gifts from God, we see that the funds belong to God. We are the stewards; God is the owner. So, questions about what we earn; how we earn it; how we save, spend and give it away are all questions of Christian stewardship.”

Teaching people to tithe is a work in progress. Some members fully grasp the concept and are already practicing. In a tithing church, gifts multiply, making it easy to sustain church programs. 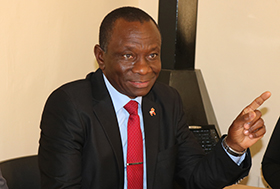 The Rev. Alan Gurupira, administrative assistant to Bishop Eben K. Nhiwatiwa. Photo by Priscilla Muzerengwa, UMNS.
“Tithe has been prescribed as the first step of giving in The United Methodist Church,” said Gurupira. “You can’t give more without first giving your tithe.” After paying tithes, members also give pledges and serve the church in various ways.

Harvest thanksgiving marks the peak of giving in Zimbabwe. In preparation for this celebration, lessons, sermons and songs remind people of their encounters with God and their reasons to be thankful. Through harvest thanksgiving, millions of dollars — more than $3 million U.S. in 2017 — are realized.

“We get donations from people: the cooking oil, the rice, the meat,” said Chipo Misi, Harare East District lay leader. “I can donate 20 kilograms of rice, but I will buy the ticket again for $20 U.S.”

Everything is done in the spirit of fundraising, she continued. “The Gospel has to go to the people first. When their hearts accept that Jesus is my Lord and when you … (know) you are doing everything for the Lord, you do it wholeheartedly and happily.”

Patricia Mapani Chisipiti, United Methodist projects chair, said the church includes a cross section of low- and high-income people. Essential to fundraising success is involving every member of the church. “We make sure everybody takes responsibility and accepts contributing toward the program,” said Mapani. “No contribution is too small for the cause.”

Critical to resource mobilization and increased giving in churches are accountability, motivation and appreciation. Church leaders provide vision as well as dynamism which influence and inspire members to be committed and productive. Zimbabwe tries to sustain itself from within, raising resources necessary for making disciples of Jesus Christ for the transformation of the world.

The church in Zimbabwe appreciates the ongoing support from partners in the spirit of chabadza, Nhiwatiwa said. The Shona word roughly translates to people in relationship working alongside each other for mutual benefit.

“Great support is being received from sister congregations, districts and episcopal areas in the USA and Europe,” Gurupira said. “The Zimbabwe Episcopal Area appreciates the support from all our agencies (Global Ministries, Higher Education and Ministry, Communications) to bolster church programs. (We are) striving to be a resourceful example for a self-reliant church in Africa.”

This year also marks the first time the denomination’s finance agency is also reporting apportionments from outside the U.S.