As you drive along Tenku Umar, the road to Loknga Beach, the piles of debris grow bigger and higher.

Uprooted palm trees and planks of wood, ripped from houses, are everywhere. Mattresses, tangled metal, plastic bottles, woven baskets, pieces of clothing and an odd assortment of household items are mired in water and mud.

The debris — and the destruction — go on for miles. The houses left standing, many of them uninhabitable, have varying degrees of damage. Rice paddies, now brown and flooded with saltwater, are rendered useless.

All this is the result of the Dec. 26 earthquake and tsunami that, by official count, has claimed more than 157,000 lives in the Indian Ocean area — most of them in Indonesia. On Jan. 13, a delegation of United Methodists and Methodists from Indonesia surveyed the damage in Banda Aceh, one of the hardest-hit areas.

One of the delegation, the Rev. Henry Leono, pastor of St. Paul United Methodist Church in Willingboro, N.J., knows the city well. A native of Kisaran, Indonesia, he moved to Banda Aceh when he was 14 years old. His oldest brother, Luther Leono, established the first Methodist congregation there. Although Henry Leono left the city in 1965, he had visited it again 10 years ago.

It is those memories — from childhood and from later visits — that make it difficult for him to accept the devastation of Banda Aceh, even as he sees it with his own eyes. "This is beyond my imagination," he says. "The destruction is so unbelievable."

Even now, nearly three weeks after the tsunami, the bodies of the missing are still being retrieved and identified. In the Blang Padang complex, a neighborhood that includes the homes of the chief of police and the chief of the military, three body bags lie at the side of the road while workers pull on clean gloves and prepare new bags. A framed photograph of a girl is tied to one of the three bags.

Leono explains that many people died in this section of town because they had fled to one of several large fields there, seeking safety in open space after the earthquake.

"Aceh is crying tsunami," reads a sign spray-painted on a building.

Survivors of the Dec. 26 tsunami describe how their homes were destroyed by the waves.

Twin-bedded rooms stand open to the elements in a square full of hotels in the Peunayone neighborhood. Carried by the wave, a ship has anchored itself in front of Hotel Medan, as if its crew had checked in. The food court in the center of the square has simply vanished.

Off the square, Leono finds the small building, now essentially destroyed, where his brother established the first Methodist church in Banda Aceh. A nearby bridge over the Krung Aceh River has survived, but boats are tossed at random among the general debris along the riverbank.

Leono is thankful that his sister and brother-in-law, Ida and Yusnam Law, and their two sons escaped the tsunami, even though their Banda Aceh home is in ruins. They were able to drive to higher ground when they heard the water was coming. The younger son, riding a motorcycle, abandoned it as the water rose and sought shelter on the second floor of a home. On Dec. 29, they flew to Medan on a military plane.

Even now, Leono says, his sister and her family are so traumatized they cannot think of the future. "They are still very much controlled by this event," he adds.

The Rev. Tahir Wijaya, current pastor of the Methodist Church in Banda Aceh, is thinking of the future. His task, he says through a translator, is to get his church building and attached school up and running as soon as possible.

It will not be easy, judging by the condition of the buildings and the mud-soaked, debris-strewn yard in front, where church pews are stacked like firewood. 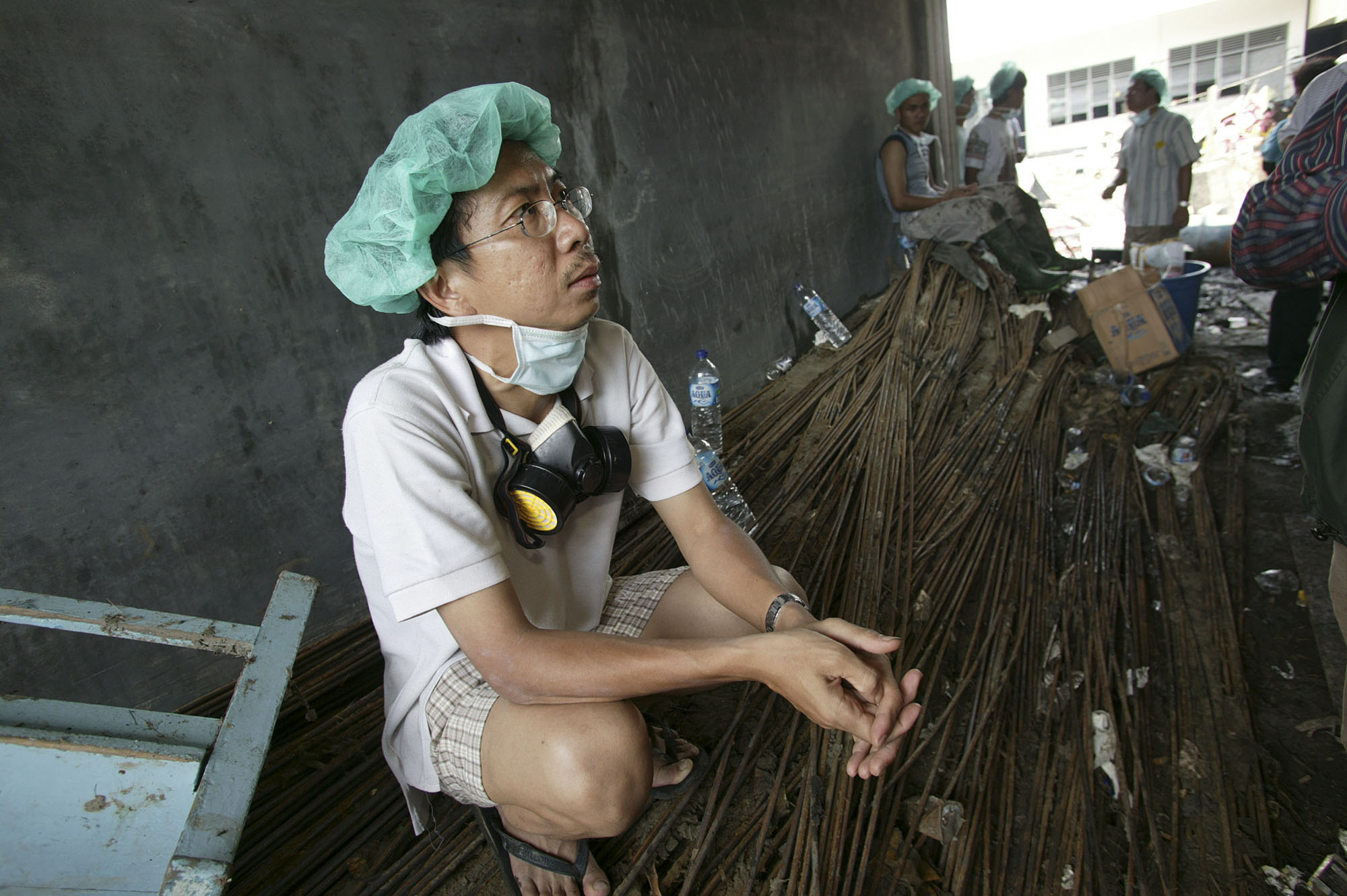 The Rev. Tahir Wijaya takes a break from cleanup duties at the church to recall how he survived the tsunami.

When the earthquake occurred that Sunday morning, the children in the Sunday school class ran out of the building. Wijaya made a trip around the city, surveying the earthquake damage, while the chairman of the church council decided that 10 a.m. worship could proceed as usual.

Before the pastor was able to return to his church, however, the tsunami came. He survived by climbing a tree. The Sunday school students and his wife and two-day-old daughter survived by running to the third floor of the school building. His daughter, he says with a smile, is now named Natalie Tsunami.

Forty-five church members, who were either in their homes or on the street, are believed to have died, although only three of the bodies have been found so far. Fifty church families have homes that were damaged or destroyed. Church membership includes 150 adults, 130 Sunday school children and 120 youth.

The wave washed a number of bodies onto the church grounds. After the water receded, two corpses were found inside and another 27 found outside.

Some of the 760 kindergarten through high school students who attend the Methodist school live in that neighborhood. One positive outcome of the tsunami, Wijaya says, is it "has enlarged our ministry to these families." He wants the cleanup to proceed as quickly as possible "to show there is new life."

Shopkeepers salvage oil lamps from the wreckage of their store.

Leono remembers this church, which was built by his brother, very well, too. "We spent almost every night in the church as young people," he explains. The damage bothers him almost as much as the knowledge that some of the friends he grew up with here did not survive the tsunami.

And there is more evidence of death and destruction in other neighborhoods around the city. In a well-to-do area near Kruncuk beach, only the cement foundations remain where houses once stood. A local, who lost both property and family, reports that only 200 of the 3,000 residents in the neighborhood survived the tsunami.

In other parts of Banda Aceh, relief organizations and troops from foreign governments have pitched tents alongside the camps for those displaced by the tsunami. At a hangar for the Indonesian Air Force, boxes of relief supplies are piled high as helicopters and supply planes come and go. A few fields away, a line of men toss bags of supplies onto a U.S. Navy helicopter that will fly to Melaboh, a city nearly destroyed by the tsunami, as a USAID truck drives by.

A positive sign of life is the temporary relocation of the downtown market to the outskirts of the city. Piles of fiery red chiles, long beans, coconuts, silvery salted fish and other food essentials line the edges of the street.

And — on this bright sunny morning after several days of rain — everyone, from resident to relief worker, seems to be doing laundry. Drying clothes are hung from lines stretched between trees or buildings, draped over fences and tree branches or arranged carefully along the grassy banks of a small stream.