When the Rev. Henry Leono surveyed Banda Aceh 18 days after a deadly tsunami all but obliterated the Indonesia city, he found the devastation difficult to accept.

The New Jersey pastor, whose oldest brother founded the first Methodist church in Banda Aceh, had lived there as a teen and returned for visits. What he was seeing – and what the rest of the world had glimpsed via news coverage – was, in his words, “beyond my imagination.”

Around the Indian Ocean – in Indonesia, Sri Lanka, Thailand, India, Myanmar, Malaysia, the Maldives and even far-away Somalia – the Dec. 26, 2004, earthquake and tsunami left more than 200,000 dead or missing, caused massive property damage and homelessness and even changed the landscape.

Over the last decade, The United Methodist Church has responded by sponsoring major rebuilding, community development and livelihood projects in Indonesia and Sri Lanka. Grants for tsunami recovery also were distributed to partners in other areas. The work was funded by what was then a record-breaking $41.5 million donated to the United Methodist Committee on Relief. 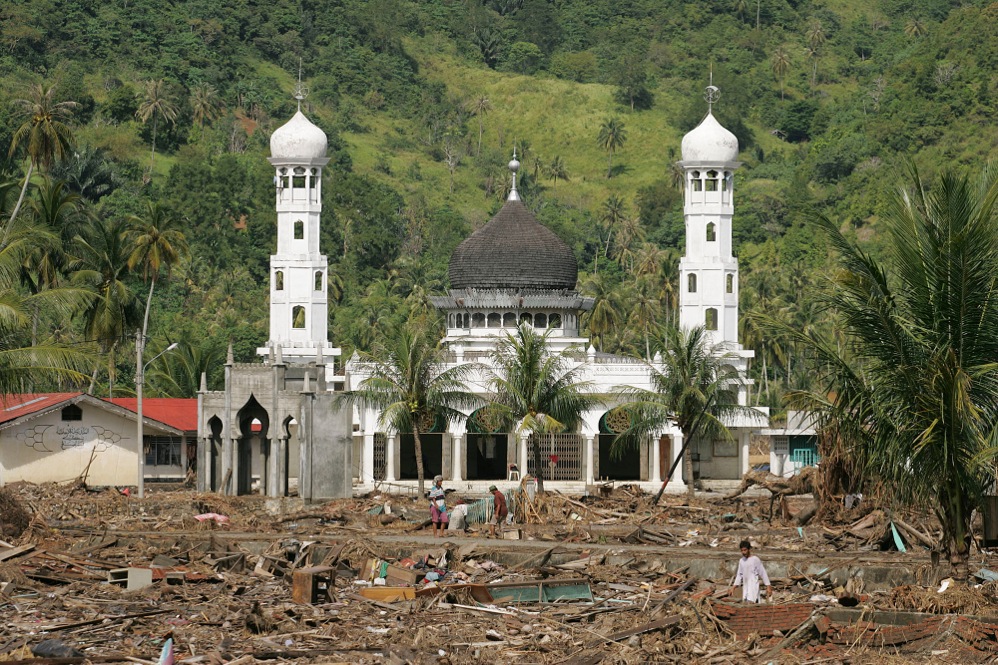 A visit to Indonesia by a United Methodist delegation following the Dec. 26, 2004, tsunami, sparked a major denominational response for tsunami recovery. View a tsunami slideshow from Indonesia.

In prayer and partnership

In Indonesia, Leono was part of a United Methodist delegation that traveled to North Sumatra in January 2005 on a fact-finding mission and in solidarity with the Gereja Methodist Indonesia (Methodist Church of Indonesia).

The group had come in a spirit of prayer and partnership “as we work with you to respond to the crisis that has struck the people of Indonesia,” Bishop Joel Martinez, then president of the United Methodist Board of Global Ministries, told church leaders at a meeting in Medan.

“The Indonesian Methodist Church was not in the position, financially, to do much,” recalled the Rev. David Wu, a board executive and native of Indonesia who coordinated the delegation’s visit. But church members provided “the connection for us to find people dependable to work with,” he said.

Indonesian Methodists had churches and schools in the tsunami-hit cities of Banda Aceh, Bireuen, Lhokeumawem and Meulaboh. U.S. United Methodists, particularly those in Indiana and Missouri, also pledged to help rebuild churches damaged in Banda Aceh and Meulaboh, with additional space for community centers and clinics.

It was the strengthening of this long-established mission connection that would help distinguish the United Methodist relief work from the “hit-and-run” efforts of some other nongovernmental organizations, Wu pointed out.

“I think that speaks loudly in terms of the commitment and dedication of UMCOR to the suffering of the people in Indonesia.”

Less than a month after the delegation’s visit, UMCOR was preparing start-up relief operations in Indonesia and Sri Lanka. The agency also provided funding to its partners, including Church World Service, which had more than 100 staff members in Indonesia and was the lead implementing partner for Action by Churches Together.

Maurice Bloem, now executive vice president for CWS, was based in Jakarta, Indonesia’s capital, in 2004 but was on vacation in New Zealand when the tsunami hit.

The tsunami’s effect on the agency’s two projects in Banda Aceh was immediate. Nearly all the staff members assigned to one project were killed, while most of the beneficiaries of the other project perished, Bloem said.

“I had a staff member that had lost close to 20 family members,” he remembered. “We had to work within that reality.”

A direct connection with households and communities has led to a successful 10-year tsunami recovery effort in Sri Lanka by the United Methodist Committee on Relief.
“All of it was really driven by the members of the household, the families themselves,” said Sharad Aggarwal, director of international programs.
UMCOR’s work is ending this year in one of the places where it began – Batticola, one of many communities impacted both by the tsunami and by years of civil conflict.
In the first few years of the recovery, UMCOR collaborated closely with the Methodist Church of Sri Lanka – at their invitation – and helped the church build its own capacity.
With funding from Lutheran World Relief, UMCOR fine-tuned its methodology for a program called “This Village Livelihood,” Aggarwal said, which identifies and organizes 8-12 households into groups that support their members as they set up small businesses and learn to invest and save.
UMCOR will close its Sri Lanka office by February 2015. A new, independent local organization that includes five or six current staff, called the Association for Mobilizing Community Resources, will continue the work.
“One of the irrecoverables of the tsunami” in Sri Lanka has been the loss of land by communities who previously lived along the country’s coastline, said Roshan Mendis, a Methodist and top executive of LEADS, a nongovernmental organization.
Local governments have set up tourist industries in “a kind of land grab,” he explained in a recent interview. Fishing societies in the northeast especially have been affected.

Despite the obstacles, CWS had people on the ground within 48 hours to assess the situation, but the first two weeks were especially tough. Bloem, a veteran of floods and cyclones from a previous assignment in Bangladesh, was astonished by the complete devastation. “I had never seen anything like that,” he said.

UMCOR’s six years of tsunami recovery work in Indonesia also included food relief and the distribution of medicines, the building and equipping of schools and community centers; the construction or repair of roads, bridges, and irrigation channels and water, the installation or improvement of sanitation facilities in schools and hospitals and disaster risk reduction training.

The project directly served more than 144,600 individuals and 790 families and indirectly reached another 400,000 people.

The office’s Water Sanitation and Hygiene (WASH) project in 13 schools in Aceh Province, benefited 2,277 schoolchildren and 277 teachers. It was formally handed over to the local communities in January 2010.

The involvement of students and educators was key to the WASH project, said Sharad Aggarwal, UMCOR’s director of international programs. “The children would actually comment on the different designs before we chose a design.”

A successful project “starts and ends with beneficiary participation,” he explained. “Even in the relief stages, we’re doing a lot with consultation. That’s absolutely essential and critical with all our programs.”

What also enhanced the CWS work – the bulk of which was completed in five years, except for Nias Island, which also suffered from a later earthquake – was the flexibility allowed then for the use of funds from faith-based organizations, Bloem said.

Capacity and quality were considered and the funds could be spread out over a longer period of time. Under a “Do No Harm” policy, tsunami recovery for a community could include a certain percentage of other households in need that were not directly affected by the disaster. In a poor country like Indonesia, he added, “that was very important.”

Being able to do no harm or “build back better” depends on taking the time to involve the local community, said Paul Jeffrey, a United Methodist missionary and photojournalist who has covered the tsunami recovery for Action By Churches Together.

The prefab houses built quickly in Indonesia by nongovernmental organizations that then sat empty are the result of not working in consultation with the future occupants. “To me, those are sort of a symbol of what didn’t work,” he explained.

As Jeffrey wrote in a blog about the 10th anniversary of the tsunami, those houses are “silent monuments to all that’s wrong with the aid business. In short, the tsunami-battered shorelines were fertile ground for lessons to be learned, and in some cases ignored.”

UMCOR already had learned from its work in other places and interviewed people about where they wanted to live and who they were close to, noted Wu, now retired from the Board of Global Ministries.

“Creating a new neighborhood where the new neighbors are former friends or at least people that they know” was an ingenious plan, he said.

At the request of the Indonesian church, Wu returned to Banda Aceh with the Rev. Sam Dixon of UMCOR in January 2008 for re-dedication of Banda Aceh Methodist Church.

Leono, who retired six years ago and now lives in Point Pleasant Beach, New Jersey, last returned to the Aceh Province in 2011, where he visited the UMCOR office as it was closing and preached in the rebuilt Banda Aceh church. “It is very beautiful and the school (next door) also is very beautiful,” he said.

On the trip in 2011, Leono also accomplished something that was not possible immediately after the tsunami – a visit to the seaport of Meulaboh, the West Sumatra city closest to the epicenter of the Dec. 26 earthquake, where he had helped establish a Methodist congregation 50 years earlier.

Leono preached at the three-story building – where the pastor lives and where worship and other activities take place – to a congregation that had doubled since the tsunami to more than 100 people. He reported that the Methodists own land, purchased after the tsunami, which has increased in value, and is awaiting government permission to construct a church building and school.

Bloom is a United Methodist News Service multimedia reporter based in New York. Follow her at http://twitter.com/umcscribe or contact her at (646) 369-3759 or [email protected]