Editor's note: On May 7, the active bishops of The United Methodist Church went to the U.S. Mexico border to learn more about the people there and the issues they face. "This is one of two commentaries by United Methodist pastors who work at the border each day. In the other commentary, the Rev. John Fanestil stands in Friendship Park on the U.S. side.

A border metropolis with a population of almost 3 million, Tijuana, Mexico, is a perfect location for bi-national, international, legal and illegal activities.

Because it is the largest border metropolis in Mexico, Tijuana is a popular place for the U.S. government to drop deported individuals. They seem to believe nobody will notice! Migrant groups intersect at the border - exiting and the other arriving.

In recent years, the number of deportations has escalated to unprecedented figures. According to Instituto Nacional de Migracin, the state of Baja California, which is immediately south of the U.S. state of California, leads all states in Mexico in the number of repatriated migrants received from the United States.

The number of deportations from the United States to Tijuana alone each year averages 100,000. Because of this, an estimated more than 3,000 deported individuals wander around Tijuana every day.

Baja California receives more than 33 percent of the more than 400,000 people deported annually from the United States.

This number does not reflect the migrants going north. Migrants remain at the border until they either cross into the United States or return to their place of origin. The fusion of these migrants and their inability to move from Tijuana continues to cause a demographic explosion.

Migrants in Tijuana also are international migrants. Many - especially those from Central America - who do not succeed in crossing or are being deported stay in Tijuana. This is the reason for a high concentration of Central Americans living in Tijuana as undocumented.

Surprisingly, migration from Mexico to the United States is almost zero. This is because Mexico's economy is strong and because the efforts of the United States to secure its southern border have been extraordinary.

The Tijuana River, known in Tijuana as "El Bordo," has become a place of refuge for thousands of Mexican and Central American migrants. At El Bordo, the riverbank that extends 2.5 miles along the U.S. Mexico fence, migrants have built and excavated "pocitos." Pocitos are tunnels about 15 meters (16 yards) long and a meter (3.28 feet) deep in which migrants - men and women - live in hiding from any potential assault of police or organized crime. Twenty pocitos have been found in the Tijuana River.

At the bridges along the Tijuana River, migrants gather as a community. During their recent border visit, the United Methodist bishops talked and prayed for three migrants coming out of the United States. One of those leaving was a 16-year-old who cried as he told us his own migration and deportation story. 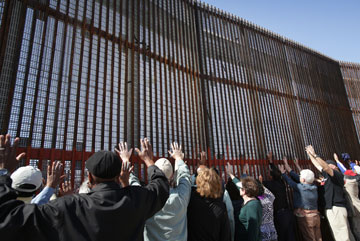 United Methodist bishops raise their hands in prayer in El Faro Park on the Mexican side of the border fence in Tijuana during the May 7 immersion experience.

This is where people who live in the Tijuana River go for help.

As many as 800 people may come here for a meal. This place gathers international and national migrants; migrants repatriated from the United States and migrants looking for an opportunity to cross in to the United States.

Drug and alcohol rehabilitation is an increasing need among these migrants. Once they are in Tijuana, many migrants feel lonely and depressed because they miss their family, lack money and employment and cannot move off the Tijuana River. Some turn to drugs and other means of substance abuse to try to escape their reality. They include those recently deported and those deported several months ago.

Procuring is illegal under federal law in Mexico; states legalize and regulate prostitution only in red-light districts.

Prostitution is an illegal and serious clandestine crime, not only in Tijuana, but also in San Diego. Girls of 12, 13 and 14 are sold into forced prostitution. Many work on Coahuila and First streets, and a high number of them cross illegally to San Diego as sex slaves. Motels in San Diego, El Cajon and Tijuana that advertise "massages" operate this type of activity.

More than 15,000 women work as street prostitutes, others in the city's more than 200 clubs and brothels. The large majority of them are migrant women trapped in sex trade, sex trafficking and prostitution. Prostitution and trafficking can take place in the massage parlors and strip clubs, on the streets in cars or in a tent at the edge of fields cultivated by migrant workers. Sex traffickers or coyotes (immigrant smugglers) lure poor women and children with false promises of jobs, sometimes kidnapping those they transport to be sold.

Read about the work of Rev. John Fanestil, who works in Friendship Park on the U.S. side of the border.

El Faro Park is a historic place for bi-national family reunions disrupted by the construction of a new and intimidating U.S.-Mexico wall that reaches out into the Pacific Ocean. This area also attracts international and national tourists. People come to see the monument that announces the boundaries between the United States and Mexico. Visitors are curious to see and touch the $4 million wall that separates the countries.

*Montiel, a missionary with the United Methodist Board of Global Ministries, works with the California-Pacific Annual Conference in its San Diego office.