Editor's note: On May 7, the active bishops of The United Methodist Church went to the U.S. Mexico border to learn more about the people there and the issues they face. This is one of two commentaries by United Methodist pastors who work at the border each day. In the other commentary, the Rev. Saul Montiel talks about life in Tijuana.

Hosting events at Friendship Park - the historic bi-national meeting place at the westernmost edge of the U.S.-Mexico border - can be complicated. The part of the meeting place on the U.S. side of the border fence is now within what San Diego Border Patrol considers its "theater of operations."

I'll admit my heart skipped a beat when I first learned that the active bishops of The United Methodist Church, while on retreat in San Diego, wanted to visit Friendship Park.

Quickly, however, calm - rooted in my intimate knowledge of the place - took over. I have been visiting Friendship Park for the better part of a decade now. On and off since 2008, I have had the privilege of serving Holy Communion to people on both sides of the border fence at this unique location.

Since June 2012, I have served the sacrament weekly at Friendship Park. We call our weekly gatherings "EL FARO: The Border Church / La Iglesia Fronteriza." The park sits in the shadow of Tijuana's famous lighthouse, "el faro," overlooking the Pacific Ocean. To my knowledge, ours is the only Christian community in the world where the faithful gather weekly to celebrate Communion while standing in two nations.

Because of my experience at Friendship Park, I knew that once the bishops were on site, we would feel the mysterious power of God's presence in this place.

Built around a monument marking the spot where the U.S.Mexico Boundary Commission first met in 1849 at the end of the U.S.Mexico War, Friendship Park is the only place on the border created uniquely to promote friendship between the peoples of the two nations.

On August 18, 1971, then-First Lady Pat Nixon inaugurated the surrounding area as California's Border Field State Park. In an act that still defines the spirit of the place, she asked her security detail to cut the three strands of barbed wire that then marked the international boundary.

She then stepped into Mexico, where an enthusiastic crowd, assembled in Tijuana for the occasion, surrounded her.

In today's era of heightened border security, people who go to Friendship Park must greet one another through a wall of thick, steel mesh. Yet people keep coming. People with cases pending before U.S. immigration courts, people on parole, people without U.S. passports. For many people, Friendship Park is the only place they can see their loved ones from Mexico in the flesh.

Space allows for no formality 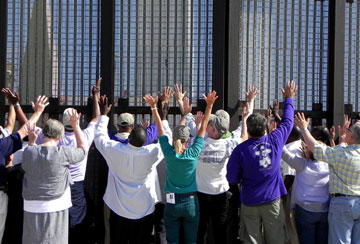 United Methodist bishops raise their arms in prayer next to the border fence in San Diego's Friendship Park. Other bishops do the same on the opposite side of the fence in Tijuana's El Faro Park. A UMNS photo by Karen Clark Ristine.

The bishops' visit on May 7 did not disappoint. One bus of bishops and spouses crossed the border to meet with friends from the Iglesia Metodista de Mexico. Three buses made stops along the San Diego side of the border. Then we all met at Friendship Park, a bi-national congregation more than 100 strong.

To call our weekly Communion celebrations at Friendship Park "humble" is an understatement. The space between the Border Patrol's two walls allows for no formality. There are no ushers, no candles, no altar, except the one we create by laying out our plates and cups on either side of the fence. The "music department" is a wonderful 17-year-old from Tijuana, Jaime Luis, who is learning to play the guitar.

On May 7, the bishops caught the spirit of friendship endemic to the place and entered full force into worship. Repeatedly we sang the refrain, "Abre mis ojos, O Cristo, yo quiero verte" - "Open my eyes, O Christ, I want to see you." After a brief reading from the Scripture, we prepared ourselves for the sacrament by entering into the ritual act that stands at the center of our community's spiritual practice.

Facing the border wall with our hands held low, we ask God's forgiveness. We reach our hands to the sky and embrace God's pardon. We then place our hands on the border wall, passing the peace to our friends on the other side. Pastors consecrate bread and juice on both sides of the border. The sacrament is celebrated, and all are welcome.

As familiar as these actions are, they take on added power - at least to me they do - when shared across the border. I know of no greater call to repentance than the border wall, which separates parents from children, husbands from wives, friends from friends. When we raise our sights to the heavens, the vast expanse of the sky reminds us that the extraordinary wideness of God's mercy will outlast all national boundaries. When we declare "May the peace of Christ be with you" to someone on the other side of the border, the greeting takes on dual meaning - at once a statement of eternal truth and, at the same time, a hope-filled petition. While the bread is broken and the juice is poured in two nations, the Communion elements still somehow, mysteriously, become the gifts of God for the one people of God.

Read about life in Tijuana from the perspective of the Rev. Saul Montiel, a United Methodist pastor who explains how migrants live there.

All this seemed especially palpable May 7, for our gathering took place as members of the U.S. Senate considered legislation holding the promise of comprehensive immigration reform. As the powerful gathered in Washington to deliberate, a common cry went up from the active episcopal leaders of The United Methodist Church, gathered at the very edge of the continent:

First: "God, forgive us, as peoples, as churches, as nations!"

Then: "Behold the wideness of God's mercy!"

Finally: "May the peace of Christ be with you!"

May God bring these prayers to fulfillment soon in a lasting friendship between the peoples of Mexico and the United States.

*Fanestil, a United Methodist minister, heads the Foundation for Change, a nonprofit organization in San Diego.

Maria Chavalan Sut, who lived in sanctuary at Wesley Memorial United Methodist Church in Charlottesville, Virginia, has been granted a Stay of Removal for one year.
Mission and Ministry