The Rev. Nicole Anderson lives 20 miles from any other female pastor and even farther from one who’s young.

The 28-year-old has felt some loneliness and isolation in her work, and she’d like to see The United Methodist Church pair her and other young women clergy with women colleagues who could offer support and advice.

It could happen online.

“Google Hangouts are a blessing from God,” Anderson said.

As pastor of First United Methodist Church in the small town of Vermillion, South Dakota, Anderson may be more isolated than most. But strength in numbers is not something any young woman elder can count on.

Elders are the seminary-trained ministers who lead most United Methodist churches in the U.S. and are the ones eligible to serve as district superintendents and bishops.

But young elders — under age 35 — continue to be rare in the denomination. And women elders are dropping in number and in their percentage of the young clergy group.

Those are two findings of the Lewis Center for Church Leadership’s 2018 clergy age trends study. The study counts as young elders those ordained and those like Anderson who are commissioned and on track for ordination.

In an essay accompanying the report, the Rev. Lovett H. Weems Jr. and Ann A. Michel offer five reasons why The United Methodist Church, which has steadily declined in membership and worship attendance in the U.S., needs young leadership.

Reaching young people is one.

“They are more likely to speak the language of an emerging generation whose worldview and modes of communication differ from those of their parents’ generation,” Weems and Michel wrote.

This year’s report confirms some longstanding patterns, including the overall decline in the number of active elders. In 1985, the denomination had 21,378, and earlier this year had just 13,669.

The number of licensed local pastors, who tend to lead smaller churches, often on a bi-vocational basis, grew steadily from 1985 to 2010, and has stayed about even as the elder numbers continue a steady drop.

The denomination had five elders for every local pastor in 1990. Now the ratio is under two-to-one.

The Lewis Center study shows the number of deacons dipped in 2018. Deacons can lead worship but often focus on ministries of service and justice, including in non-church settings.

But the number of young deacons stayed the same — a record high 124 — and young deacons make up just over 12 percent of the total.

By contrast, elders under 35 make up about 7 percent of all active elders. The number of young women elders has declined each of the last three years, and the 2018 study found 350 young women among the 13,669 active elders. 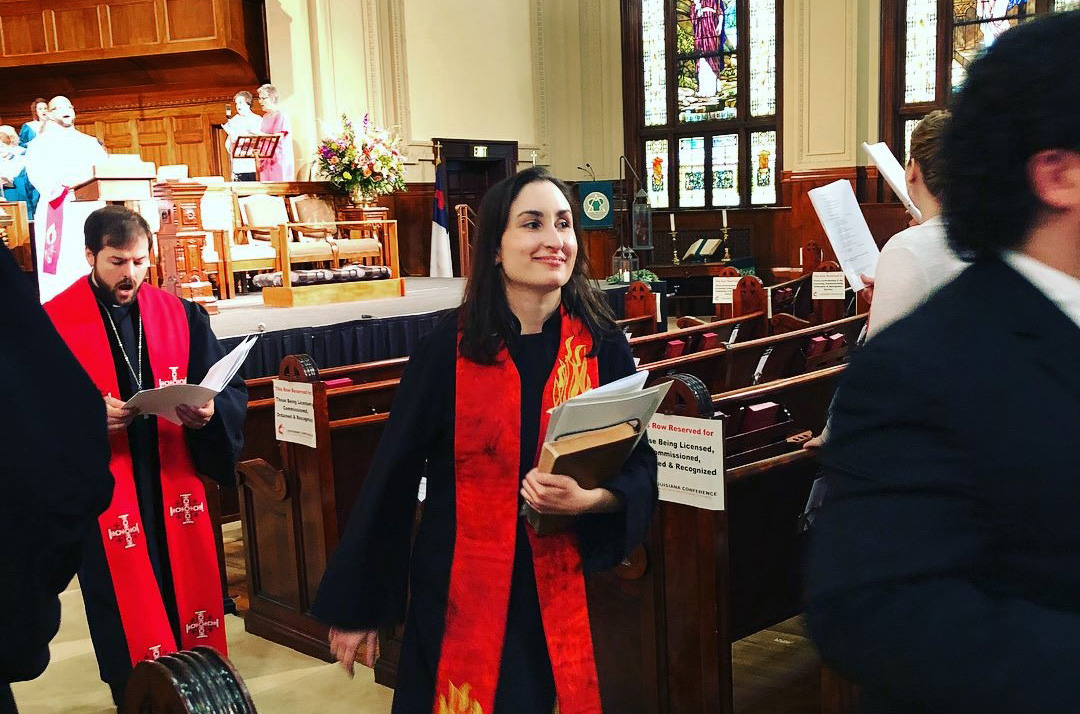 The challenge of recruiting young elders and other young clergy has long been recognized in The United Methodist Church, with such programs as the Young Clergy Initiative and Excellence in Clergy Leadership Scholarship created to turn things around long term.

Weems notes that conferences vary in their percentage of young elders, with some high achievers, such as the Louisiana Conference, exceeding 10 percent.

“Louisiana has been blessed with a legacy focused on the development of young people,” said Bishop Cynthia Fierro Harvey, who oversees the conference. “The annual conference has enthusiastically invested fiscal and human resources in leadership development over the years.”

“We don’t feel like we have to, for lack of a better word, pay our dues to get the bishop’s ear,” said Rivera, who is on track for elder ordination. “We feel we belong at the table.”

The Dakotas Conference ranks second (after Arkansas) among U.S. conferences in percentage of young clergy. Deb Kjerstad, Dakotas’ leadership development director, can tick off a long list of targeted efforts that are part of a “culture of call” strategy.

But Kjerstad warns there’s no easy fix, and probably no fix at all without a lot more flexibility. She believes many young people who feel called to church ministry are more concerned with relevance and impact than with credentials or serving in an established church setting.

“We must encourage our boards of ordained ministry to be open and creative to new ways for people to enter ministry,” Kjerstad said.

The desire for flexibility may be a factor in the decline of young women elders.

The Rev. Allison Sauls Sikes recalls that women made up more than half her seminary class, but many ultimately chose to be deacons or to do “deacon-type work” without pursuing ordination.

Sikes also said it’s possible that the denomination’s struggle to remain united despite division over homosexuality could be a challenge to recruiting young clergy, male and female.

“There’s a lot of anxiety in the system and in people’s hearts,” she said.

But she thinks all conferences can do a better job of staying in touch with and encouraging those who take time off between seminary and church ministry, as she did to do missionary service. She also thinks it’s important for conferences to make sure women are serving as superintendents and in other top jobs.

“When I see women in strong positions of leadership, I think, ʽOK, this will be a safe place for me,’” Tyler said.

Dawn Wiggins Hare, top executive of the Commission on the Status and Role of Women, isn’t sure why young women elders are declining in number.

But she noted that women United Methodist clergy still make less than men and still sometimes face pushback from churches who don’t want a woman pastor.

As for supporting young women in the decision to become clergy, she’d like to see a comprehensive denominational effort that would include more financial aid for seminarians.

She added: “I wonder if we invested as much time, energy and resources in elevating the Divine Feminine as we did the Divine Masculine, how that would change the outcome of nurturing the calls of young women.”

Many women travel long distances to access maternity care at United Methodist health center, which also has been designated as an anti-retroviral clinic for HIV patients.
Evangelism

Clergywomen in US, Africa forge bonds

Black clergywomen in the U.S. and their counterparts in Africa are building relationships. A gathering is planned at Africa University in 2022.
Local Church

United Methodist Women in Liberia has launched a program to make reusable sanitary pads so that girls don’t have to miss school during their menstrual cycles.