“After Jesus was born in Bethlehem in the territory of Judea during the reign of King Herod, magi came from the east to Jerusalem. They asked, ‘Where is the newborn king of the Jews? We've seen his star in the east, and we've come to honor him.’” (Matthew 2:1-2, Common English Bible)

In a year darkened by a pandemic, a rare celestial event has the potential — depending on local weather — to brighten the northern hemisphere’s longest night.

On Dec. 21, 2020, Jupiter and Saturn will appear closer together than in nearly four centuries. To many nighttime observers of this winter solstice, they will appear to merge into one — like a bright star of wonder.

Do you see what I see?

Nick Strobel, astronomer with Bakersfield College, says people will be able to see the rare great conjunction between Jupiter and Saturn anywhere if they have a view of the southwest sky and look shortly after sunset. If your sky is clear, Jupiter will be hard to miss since it’s so bright. His column includes a star chart.

Nick Strobel is among them. He is a physical science professor and director of the William M Thomas Planetarium at Bakersfield College in central California.

As an astronomer and lifelong United Methodist, he has a certain affinity with the Bible’s most famous stargazers.

“We both have a love of the night sky,” said Strobel, a member of Wesley United Methodist Church in Bakersfield. “And, we search for a place or person where heaven and earth meet, and we both found that in the person of Jesus.”

Just about every year at Christmastime, he can count on getting questions about the star of Bethlehem, and that is especially true this year.

Strobel, who regularly writes about astronomy for the Bakersfield Californian, has a column about how to see Jupiter and Saturn dancing in the night. He said the last time the planets appeared this close was in July 1623 — when Pilgrims were settling in New England.

If this year’s great conjunction gets people to look up or to ask about the Bethlehem star, he told UM News, “it’s all good!”

The biblical account of the magi does not quite match the typical church Christmas pageant image of three little boys in scratchy beards and lopsided crowns dropping gifts by the baby Jesus’ manger.

The second chapter of Matthew — the only Gospel where the wise men appear — does not specify their number or say they were kings. Matthew also does not mention the no-vacancies inn, the manger or the quaking shepherds — those are all found in the Gospel of Luke. 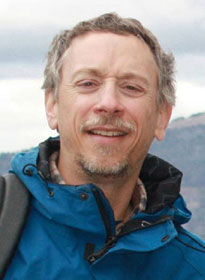 Instead, in Matthew, the wise men visit the holy family in a house in Bethlehem some point after Jesus’ birth. The number three probably derives from the three gifts they brought to the Christ child — gold, frankincense and myrrh.

The magi — called magoi in the original Greek — were likely sages and astrologers. The tradition that they were three kings named Gaspar, Melchior and Balthasar developed centuries later.

On this the Bible and Christmas tradition do agree: The magi found the newborn king by following a star.

The ancients believed God would make destiny manifest in the stars, said Gregory J. Riley, New Testament professor at United Methodist-related Claremont (Calif.) School of Theology. So, it was no surprise that Jesus’ birth was accompanied “by the appearance of his star in the very fabric of the heavens.”

The exact nature of that heavenly body has been a source of speculation — for Bible scholars, children’s book authors, astronomers and, in recent decades, planetarium audiences. Discussion of the star is part of Bakersfield College's planetarium show, “Season of Light,” Strobel has hosted each December before COVID-19.

“And look, the star they had seen in the east went ahead of them until it stood over the place where the child was. When they saw the star, they were filled with joy.” (Matthew 2: 9-10)

Strobel, 55, has his own thoughts about the star, which he has detailed at his website Astronomy Notes.

Since the night sky can vary greatly depending on the year and season, Strobel first needed a good estimate for Jesus' birth year to evaluate these possibilities.

The Bible does not give Jesus’ birth date. However, many biblical scholars and historians now think Jesus most likely was born around 7 to 4 B.C., and Strobel uses those years in his dating. That puts Jesus’ birth sometime near the death of Herod the Great (the wicked Herod mentioned at the beginning of Matthew) and Jesus’ ministry during the early years of Pontius Pilate (the wicked Roman governor in all four Gospels).

Strobel points to four natural phenomena that some astronomers think might explain the celestial sighting: a planetary conjunction, Jupiter’s retrograde motion, a nova and a comet.

What were the magi's gifts?

Because myrrh also was used to preserve corpses, many Christians have long seen the magi's gift as foreshadowing Christ’s death. The carol “We Three Kings of Orient Are” connects myrrh to the “gathering gloom.”

Many ancients would have associated myrrh with burial, said the Rev. Ben Witherington III of Asbury Theological Seminary. Myrrh also could serve as a narcotic, he said, and in that capacity, it featured in the Crucifixion. In Mark 15:23, Jesus on the cross was offered — and refused — wine mixed with myrrh. In John 19:39, Jesus later was buried with myrrh and aloe.

Alicia D. Myers, New Testament and Greek professor at Campbell University, doubts the Gospel of Matthew's earliest readers would have linked the magi's present with the coming tomb.

“In Matthew we have no explicit connection between death and myrrh," she said. “Instead, the context of Matthew 2 highlights the expensive nature of the spice as a costly gift alongside the gold and frankincense. I am more inclined, then, to understand the myrrh as yet another move by Matthew to reinforce Jesus' kingly status rather than reading it as an allusion to his coming death."

However interpreted, the gifts of the magi continue to inspire Christmas generosity each year.

Planetary conjunctions, where two or more planets appear very close together in the night sky, happen somewhat frequently. Saturn and Jupiter pass each other about every 20 years, just not as close as this year.

Still, Strobel thinks such a conjunction is a much likelier prospect for the Nativity's starring role. And, astronomically speaking, 7 to 6 B.C. were good years for conjunctions.

The combination of Jupiter and Saturn would have seemed especially auspicious to these astrologers in the Near East, Strobel said. Jupiter symbolized royalty, and Saturn represented the Mesopotamian deity who protected Israel. In addition, ancient astrologers associated Pisces with the Jewish people.

“(The wise men) would have been aware of the sky and probably kept records of the sky going back centuries,” Strobel said. “They would have known this was a rare occurrence. They’d think, ‘Well maybe this is telling us that something really interesting is going to be happening there in Israel.’”

If the wise men were in need of a further sign in the heavens, they got one in 5 B.C., Strobel said. That year, Jupiter, instead of "wandering" eastward as planets typically appear to do, seemed to stop and then go backward among the stars in what astronomers call a retrograde motion.

Strobel compared the motion to what happens when a car accelerates past another car. It makes the slower vehicle look like it is standing still and then receding. In 5 B.C., earth passed Jupiter and it appeared to be stationary for about a week — perfect for hovering in place over a momentous birth.

Among the various astronomical possibilities, Strobel thinks that the planetary conjunction and stationary Jupiter theories probably get closest to what the magi might have seen.

Still, that leaves two other ways the skies can wow observers — novas and comets.

Chinese astronomers, Strobel said, recorded that a new star (or nova) appeared in the constellation Capricorn during March and April of 5 B.C. A nova is actually a white dwarf — that is, a dying star — that has gathered enough material, usually from another nearby star, to build up pressure and explode. A nova quickly peaks in brightness within a few days and then fades to invisible over a few months.

The nova the Chinese spotted would have first appeared in the east (that much fits with the Gospel of Matthew). However, that nova would not have visibly moved much as the magi headed toward Bethlehem, which is why Strobel sees it as an unlikely candidate for star-of-Bethlehem status.

Many ancient cultures, including the Chinese, regarded comets as heralds of important events. Trouble is, there are no comet sightings recorded around 7 to 4 B.C. Strobel said Halley's Comet made a swing by earth in 12 B.C., too early to portend the Bethlehem birth. That’s probably a good a thing. The ancients typically viewed a comet as a bad sign — not a proclamation of joy to the world.

They entered the house and saw the child with Mary his mother. Falling to their knees, they honored him. Then they opened their treasure chests and presented him with gifts of gold, frankincense and myrrh." (Matthew 2: 11) 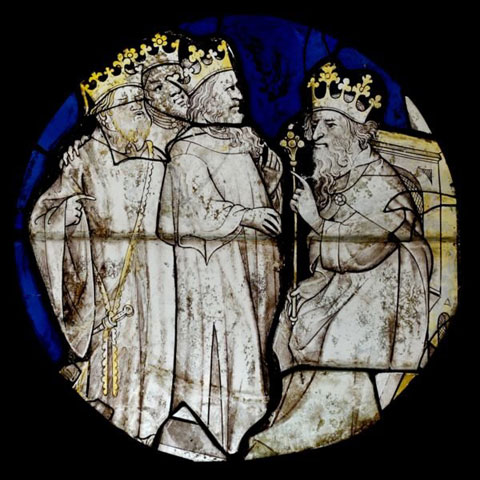 The three wise men appear before King Herod in this stained-glass window by an anonymous artist. Despite their crowns, the magi were not kings in the Bible. A web-only public domain image.

The Rev. Ben Witherington III, a United Methodist elder and Jean R. Amos Professor at Asbury Theological Seminary n Wilmore, Ky., agrees that astronomical phenomena could help explain the magi's guide. But, he points out, the magi like most ancients would have seen stars and other celestial objects as living beings — much like “the heavenly host” that visited the shepherds.

While it’s fun to speculate, Strobel said, the nature of the star does not matter to his faith. In fact, he would not care if Matthew made up the whole story of the magi.

“He was not writing a science textbook or newspaper account,” Strobel said, “but rather a book to persuade people that this person called Jesus was the Son of God, one who should be worshipped, and one who showed us how to live as God wants us to live.”

The story of the Nativity contains a deeper truth than can be found in any star chart, he said.

“God, the infinite power of the universe, is just so willing and wanting to have a relationship with us that he became a powerless infant who had to be cared for,” he said. “That’s pretty amazing that God would be willing to do that.”