Preachers need to know the Bible and how to offer pastoral care, and it helps if they can read a budget and drive a church van.

They would also do well to become students of advertising.

That’s the case made by the Rev. O. Wesley Allen Jr. and Carrie La Ferle, faculty members at Southern Methodist University, in their recently published book “Preaching and the Thirty-Second Commercial: Lessons from Advertising for the Pulpit.”

Advertising would seem the most worldly, least spiritual of enterprises.

But Allen and La Ferle point out that some commercials are uplifting and even those that aren’t can be models for delivering a focused message.

Thus their book, which is bold and original — suggesting, for example, that the marketing strategy for Arm & Hammer Baking Soda can shed light on preaching the Prodigal Son story.

“Generally, ads promote consumeristic endeavors,” Allen said. “But preachers don’t have to reshape preaching to advertising’s purposes to learn how better to communicate the counter-cultural gospel of Jesus Christ.”

Allen is a United Methodist elder and teaches homiletics at SMU’s Perkins School of Theology. He has written other books on preaching and is on the executive board of the Perkins Center for Preaching Excellence.

That center has partnered with Westminster John Knox Press for a “Preaching and …” book series, which pairs a homiletics expert with an expert in a non-theological discipline. The goal is to bring two disparate fields into conversation, sparking insights for preachers. 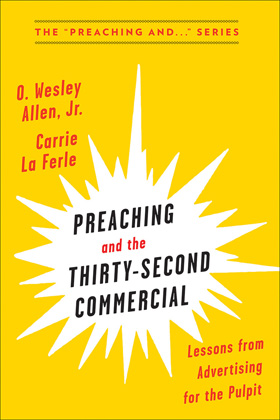 “Preaching and the Thirty-Second Commercial” is the first in the series, and it was a natural choice, given that SMU is home to the Temerlin Advertising Institute for Education and Research.

La Ferle, Marriott Endowed Professor of Ethics and Culture at the institute — and an advertising industry veteran — was glad to partner with Allen.

“I am grateful that Wes had the vision and courage to see the potential strengths of using advertising skills as one of many tools toward effective preaching,” she said.

Allen and La Ferle insist that advertising and preaching, for all their differences, have common ground.

“Both are communicative endeavors trying to get a message across in a noisy environment,” Allen said.

The book’s first chapter, titled “The Problem,” lays out just how hard it is to grab and hold an audience’s attention in the media-saturated 21st century. The authors argue that we are in a postmodern culture where “authority has shifted from reason to experience,” with implications for advertising and preaching.

And while both fields have adapted, Allen and La Ferle say the best advertisers have lots to teach preachers, including about understanding and reaching a target audience. To illustrate, they discuss the case of Lean Cuisine.

That company flourished in the 1980s, but sales began a long, slow decline. Research showed that a marketing strategy focused on helping women lose weight no longer worked.

“With this information, Lean Cuisine shifted its communication focus from dieting to being an advocate for female empowerment, health, and wellness,” the authors write, noting that sales rose by $56 million the next year.

Advertisers for big corporations have the deep pockets necessary to do demographic and focus group research. Most preachers don’t, but they can adapt those techniques.

The authors suggest that preachers think of a handful of congregation members they know well and draw on that knowledge.

“As you work on an individual sermon, you imagine what these 6-8 persons need from the biblical text and sermon for the week and how they might experience the sermonic claim and imagery you are working with,” Allen said in an email exchange about the book.

He added that he now uses this approach in his Introduction to Preaching courses to help students analyze their congregation and particularize sermons for them.

Allen and La Ferle describe how Arm & Hammer has marketed the many uses of its baking soda, under the slogan “The small box with endless possibilities.” They say that example of an umbrella message being adapted to different audiences can be instructive to preachers. Specifically, the authors suggest that a pastor preaching on the Prodigal Son parable focus on a single character and theme from the story but employ different metaphors and images to segment the message for the diverse generations and backgrounds represented in the pews.

Some TV ads are masterful in telling a story concisely, and the authors insist that preachers can learn from those ads. So, too, with the “stickiness” of great ads.

“That was one of the most important lessons I learned in working with Carrie,” Allen said. “Because ads are generally so brief — 30 seconds on television, much shorter on the web — advertisers want to include elements that grab viewers and stick in their memory. In preaching, we need to do a better job, especially with the stories and imagery we use in our sermons, to ask not just how the story or image serves the message, but what will make it stick with the hearers, so that the bigger message of the sermon will do so as well.”

The second book in the “Preaching and …” series will be about using humor in sermons. The authors are the Rev. Alyce McKenzie, Le Van Professor of Preaching and Worship at SMU’s Perkins School of Theology and director of the Perkins Center for Preaching Excellence, and Owen Hanley Lynch, an associate professor in SMU’s Meadow School of the Arts and an authority on humor in communication.

McKenzie and Lynch will lead a workshop on preaching and humor, set for April 25. Their book is due out next year.

The working title: “A Funny Thing Happened on the Way to the Pulpit.”

The book draws on other specific advertising examples, from GEICO to Nike, Old Spice to Mr. Clean. It brings together preaching theory with advertising theory. And it includes exercises for enhancing creativity.

Allen shares in the book a sermon he gave for a Perkins graduation service, right after the contentious 2019 United Methodist General Conference. The sermon had an arresting title: “There’s a Bomb in the Steeple.” But Allen also shows how the sermon’s structure and overall strategy comports with a key advertising approach — called AIDA, for Attention, Interest, Desire, Action.

For Allen, too little emphasis is placed on the cumulative effect of preaching.

“Every preacher knows that it is the week-in and week-out preaching with the same congregation that brings real personal and ecclesial transformation,” he said.

So “Preaching and the Thirty-Second Commercial” explores what preachers might learn not just from individual ads but from advertising campaigns, which offer variations on key themes, rolled out over time and in different ways.

La Ferle notes that some churches excel at marketing already.

“Other churches, like some brands, need a new way of doing things and reaching people,” she said.

“Preaching and the Thirty-Second Commercial” — in just 144 pages, including endnotes — offers a new way.