Friends got Jennifer and Ben Bienvenu to visit a United Methodist church. The lessons they learned kept the young couple coming back.

“Every time we left Pulaski Heights (United Methodist Church), we always left feeling like we had been challenged or we had something to think about into the week,” Jennifer Bienvenu said of the Little Rock, Arkansas congregation.

“Those things were important to us — that we weren’t just fulfilling a routine.”

The church’s challenge to discipleship is one main reason the couple took membership vows June 26. Jennifer Bienvenu, who grew up unchurched, made a public commitment to Christ and joined by baptism.

The couple, both in their 20s, are not unique in what they look for in congregational life. Opportunities for spiritual growth and authentic community are top motivators for churchgoing, says a newly released survey conducted by Barna Group on behalf of United Methodist Communications.

Barna’s study sought insights about what young-adult spiritual “seekers” in the United States expect from churches. The Christian research organization defined these seekers as Americans currently ages 18 to 34 who are not active churchgoers or committed to a congregation but nevertheless indicate interest in spiritual matters.

David Kinnaman, president of Barna and director of the study, said church leaders can use the findings to offer genuine community for young seekers across life experiences.

“Young adults are connected to social media nearly every waking hour, but four of the top-five reasons they might attend church point to a profound need for community that is deeper than what's available virtually,” Kinnaman said in a statement to United Methodist Communications. “In fact, twice the number of U.S. adults tell us they are lonely compared to 10 years ago — and that relational gap represents a real opportunity for churches that want to reach young seekers.”

The survey findings resonate with Jennifer Bienvenu. She and her husband joined the church just weeks before they were due to become parents of a little girl.

“We wanted to find community that is welcoming and inclusive,” she said. “We felt we really had found that at Pulaski Heights.”

Barna’s Seeker Study used a national, random and representative sample of 406 young adults across the United States, drawn from an online panel. Individuals on the panel were screened to identify people who met the criteria of a seeker.

The person also needed to answer “yes” to at least four of the following statements:

Barna weighted the sample by gender and region to be nationally representative. Research took place Nov. 26-Dec. 7, 2015. The margin of error is 4.7 percentage points, and the survey has a 95 percent confidence level. Barna estimates the survey findings represents 20-25 million Americans, about one-tenth of the U.S. adult population.

The United Methodist Church long has faced decreasing membership and attendance in the United States. However, empty pews are not just a problem for this denomination.

For example, the Southern Baptist Convention in June reported declining membership for the ninth consecutive year. Its worship attendance and baptisms also are on the downswing.

No question: Today’s faith communities have their work cut out for them when it comes to reaching new people.

However, Kinnaman pointed to Barna research that indicates The United Methodist Church in particular benefits from some built-in good will.

The group’s survey found that favorable impressions of The United Methodist Church have increased from 25 percent in 2011 to 40 percent in 2015. In the most recent survey, nearly three-quarters ─ 74 percent ─ liked the denomination’s tagline “Open Hearts. Open Minds. Open Doors.”

A number of United Methodist churches already counter the cultural trends that keep Americans otherwise occupied on Sunday mornings. In fact, as of 2014, about 30 percent of U.S. United Methodist congregations were growing in worship attendance.

Among those is the 114-year-old congregation Pulaski Heights United Methodist Church. Between 2004 and 2014, its average worship attendance has grown from 859 to 1,080.

“While we receive our usual share of transfers from other United Methodist churches, we are drawing increasing numbers of unchurched and de-churched persons seeking answers through spiritual exploration and development,” said the Rev. Britt Skarda, the church’s senior pastor.

“We have also made it clear to the public that we are a faith community that is open and welcomes all.” 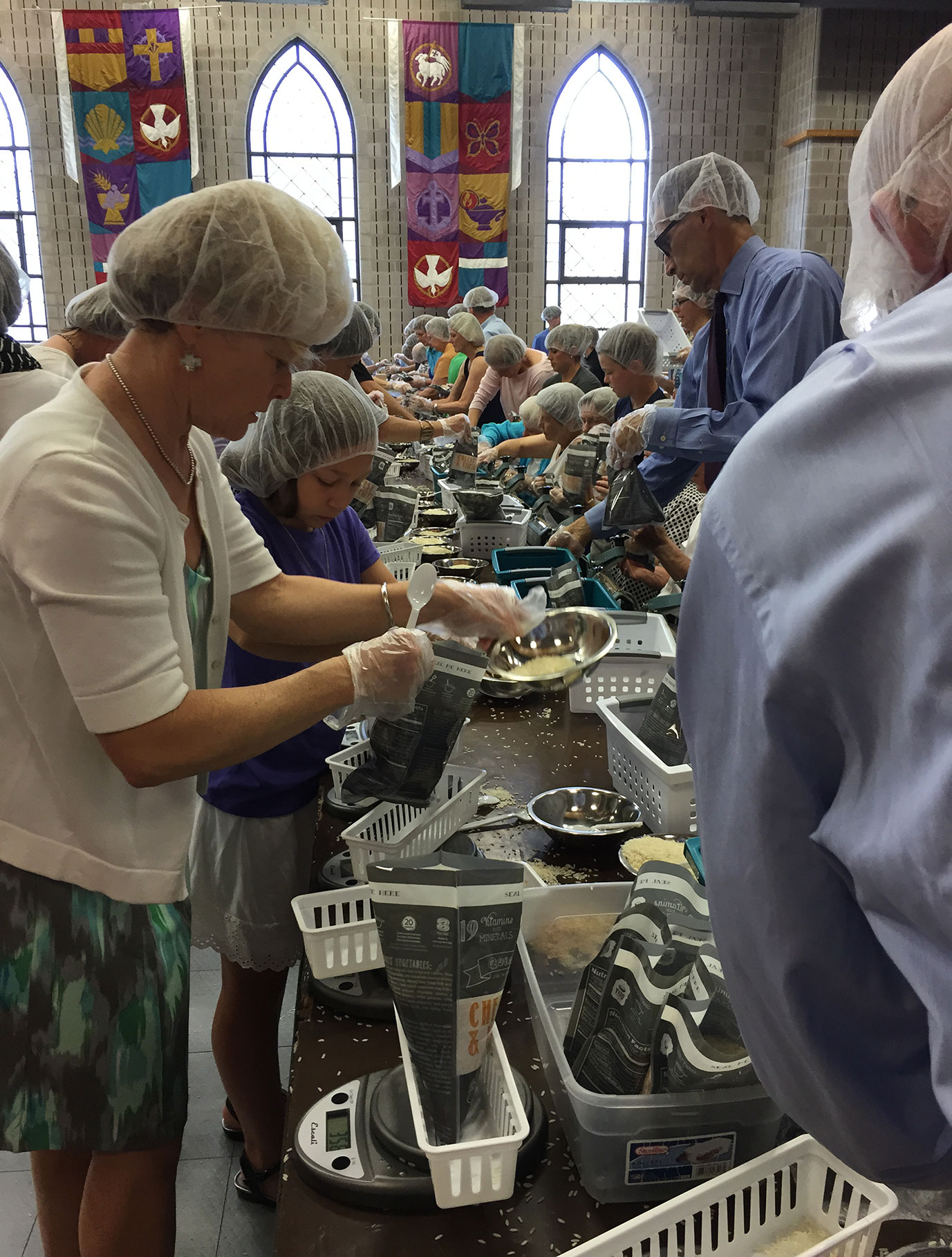 Members of Pulaski Heights United Methodist Church in Little Rock, Ark., pack meals for hungry families in the state. The church is among the congregations growing in worship attendance. Photo courtesy of Andrea Wymes

Getting people to darken the church door is tough enough, but congregations also have a deeper calling to turn seekers into disciples. Successful churches know that evangelism doesn’t stop with a greeting and a church bulletin.

“People think, ‘Oh, if we can just get them to come,’ but that’s not enough,” said Sabra Engelbrecht, executive director of ministries for The Gathering United Methodist Church.

The multi-site congregation in the St. Louis area is one of those rare churches where regular worship attendance exceeds the membership rolls. Since its first service in September 2006, the church’s average attendance has grown to 1,200.

Engelbrecht said the church relies largely on word of mouth to get visitors. Many of those individuals are totally new to the church or previously hurt by the church, she said.

The church developed a streamlined process for engaging these seekers in congregational life.

“From the minute they pull into the parking lot, there is someone at the front door greeting them and someone is helping them find a seat,” she said.

Church leaders then invite newcomers to one of the regular coffees with the pastor. Next, the church steers newcomers toward an introductory small group called the “Living Room,” which offers faith basics. After that, they can get involved in one of the congregation’s CoreGroups, which meet weekly, and possibly one of the volunteer teams.

The goal is for worshippers to feel part of the Christian community long before attending The Gathering’s membership classes, offered about once a quarter.

Jordan Glaser still remembers the second she walked into the Gathering two years ago. “The place just hugged me,” she said. “It was aesthetically, emotionally, spiritually perfect for me — and I knew before I even sat down.”

Like Bienvenu, she too grew up with no church involvement. But she was baptized last month.

“I've always worried that trying to get back into a church and get back into my faith would be riddled with stares, and judgement, and confusion on my behalf as I didn't understand what the pastor was saying,” she said. “At The Gathering none of that exists. All are welcome.”

Bienvenu and Glaser both exemplify the kind of engagement church leaders like to see. Bienvenu said she sees her baptism as both an important step for her growing family and a pledge to her Pulaski Heights church community.

“We’re not just showing up every week visiting,” she said. “We are truly there to show our commitment.”

This feature was originally published July 5, 2016. Heather Hahn is a multimedia news reporter for United Methodist News Service. Contact her at (615) 742-5470 or [email protected].