The Rev. Mark Teasdale says his seminary students speak with dread about the “E-word” — the evangelism they are required to study if they are pursuing United Methodist ordination.

“The reason they call it the ‘E-word’ and they don’t want to get too close to it is that there have been unethical people who have self-identified as evangelists who have hurt them,” Teasdale said. He is the E. Stanley Jones associate professor of evangelism at United Methodist Garrett-Evangelical Theological Seminary near Chicago.

Christians could benefit from a discussion of what constitutes ethical evangelism, he said.

Teasdale was speaking to an ecumenical group of about 50 Christians who had gathered at United Methodist Discipleship Ministries for the first North American ecumenical evangelism conference. 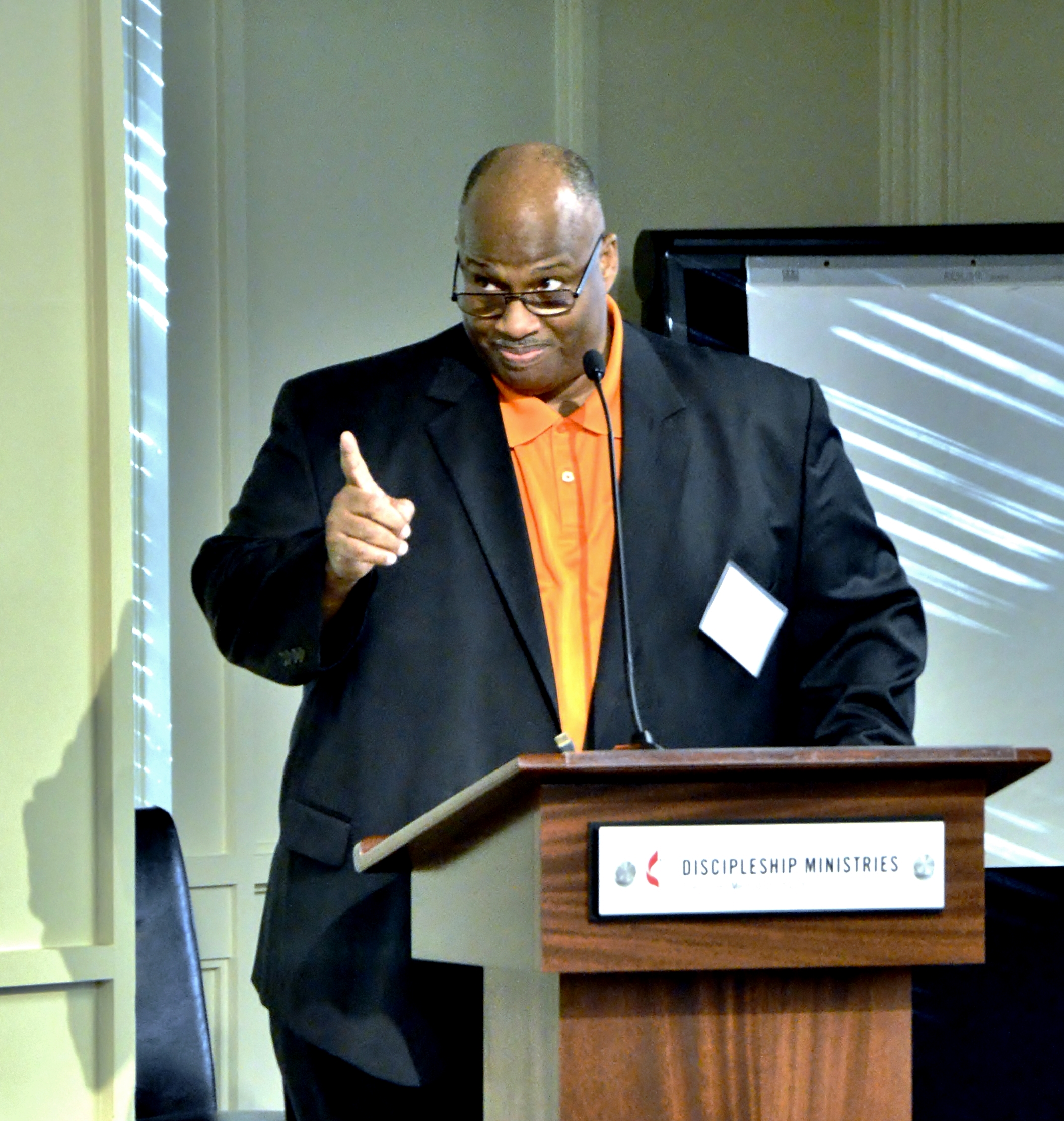 The gathering — organized by the World Council of Churches in consultation with the Canadian and National Councils of Churches — brought together scholars and pastors from traditions as varied as Catholic, Orthodox, mainline Protestant and Pentecostal Christianity. About half of the participants came from Canada. The Oct. 30-Nov. 1 event bore the name “Reclaiming Evangelism: Celebrating Change and Collaboration.”

The participants share the same call to “make disciples of all nations,” and the same challenge of carrying out that call in a part of the world where church no longer holds a privileged place.

However, a desire to fill empty pews was not the main driver of the Nashville gathering, said the Rev. Heather Heinzman Lear. She is the director of evangelism ministries at United Methodist Discipleship Ministries and an organizer of the event.

“We are all part of the same family,” she told United Methodist News Service. “It was Jesus’ prayer for us to be one. We live out our faith in different ways or different practices. But I think the ultimate goal is for the church universal to work together in partnership with God to redeem the world.”

But Christians labor in a world where evangelism has sometimes been anything but godly. Robert Cousins, a Baptist participant reared in Northern Ireland, put that problem into sharp relief.

“I grew up in a culture where you evangelized by killing people, Catholics and Protestants,” said Cousins, now director of the Tyndale Intercultural Ministries Centre in Toronto.

So how can Christians share the good news of Christ in a way that actually imitates Christ? Here are some of the ideas discussed.

The Challenge of Empty Pews

Many of the conversations at the evangelism conference dealt with the fact that Christians of varied traditions are seeing an aging and declining membership in North America.

According to Pew U.S. Religious Landscape findings released this year, the share of U.S. adults who identify as Christian has dropped from over 78 percent in 2007 to under 71 percent last year. At the same time, the share of adults who are religiously unaffiliated is rapidly growing ─ jumping from 16 to almost 23 percent. On Nov. 3, Pew released data that shows an overall decline in religious beliefs and practices among U.S. adults, largely because of the rise of the “nones.”

In Canada, a Pew analysis found an even more precipitous drop among most Christians. By 2011, the share of Canadians who described themselves Catholic or Protestant had dipped to roughly two-thirds while the share that are religiously unaffiliated had grown to 24 percent.

About 47 percent of Canadian teenagers report that they have never attended any religious services for any reason, according to research by sociologist Reginald Bibby.

The Rev. Winston Worrell, director of the World Methodist Evangelism Institute based in Atlanta, said this is an exciting time because of the challenges facing North American churches. Christendom wasn’t that great, he said. It marked a time when many Christians did not evangelize but instead relied on culture to do the work.

That was not the case when Christianity began.

“In the New Testament church — when they didn’t have Christendom and the structures, boards, books and theological institutions of today — the gospel was communicated by everybody,” he said. He believes that can happen again.

For too many Christians, their evangelism model is: “Come to my church and do the jobs I’m tired of doing and pay the bills I’m tired of paying,” said the Rev. John-Peter Smit.

He is a regional minister for congregational health in the Presbyterian Church in Canada and works with many churches seeking to turn their numbers around. However, he said, too often their yearning is not to fulfill the Great Commission or bless their communities but to solve a problem.

For evangelism to be authentic, he said, it should mean a real welcome into a faith community.

Many of the participants also emphasized the importance of praying for God’s guidance in sharing the Christian message.

“I think prayer transforms us,” said the Rev. Brenda Smith, program director with the Evangelical Lutheran Church in America. “I think there needs to be a culture of (prayer) in congregations … so that they can take it home and out as they live out our lives.”

The Rev. Judy Paulsen, a priest in the Anglican Church of Canada and professor of evangelism at Wycliffe College in Toronto, said Anglicans often have the misconception that evangelism means accosting strangers, interrupting their day and giving them something they do not want.

She challenges fellow church members to rethink evangelism by thinking of the relationships they already have. “God has placed these people as gifts to you, and you as a gift to them,” she said. “Authentic evangelism is grounded in relationship.”

Paulsen aims to train Christians to invite people with the kind of invitation God has already given them. She also wants to ensure that people who may have no clue about church life find a warm welcome.

She used the example of church she served that had parking spaces reserved for first-time guests. A church member had made it her personal ministry to watch who parked there.

“And then she would say to them: ‘Would you like me to sit with you? I’ve been here before, and I can help you through the service,’” Paulsen recounted. “Now, you can’t get a better hospitality program than that.”

Welcome the poor and sojourner

In Luke 4, Jesus quotes Isaiah, announcing that the Lord has sent him “to preach good news to the poor” and “to liberate the oppressed.”

But congregations often struggle to follow Jesus’ example. “The most critical aspect of evangelism is becoming a church that the poor can afford,” said Bishop Mark MacDonald, pastoral leader to indigenous peoples in the Anglican Church of Canada.

He said most North American churches, with the exception of historically black and some Pentecostal traditions, developed in a way that reflected the culture’s broader racism and classism. “So today, your wealth is a reliable predictor of your church membership,” he said.

Denominations have closed churches in poor areas, but that leaves the moral ground to hate groups that fill the vacuum, MacDonald said. He encourages Christians to reclaim their call to be in ministry with the poor and marginalized.

“Having a congregation is so important in places where you have high stress,” he said.

The Rev. Girma Bekele, an Ethiopian Pentecostal who now lives in Toronto, also challenged long-established churches to welcome immigrant congregations. Many of these new faith communities are growing rapidly while older, largely white congregations dwindle inside the tall-steepled buildings they own.

Perhaps it is time the historic churches shared their buildings and prime worship times with their newer neighbors, said Bekele, adjunct professor of global missions at Wycliffe College.

“We can never talk about justice until we embrace immigrant churches,” he said.

Ultimately, to be ethical and effective evangelists, Christians’ mission “must be disciple-making,” said Bishop Darryl B. Starnes Sr., of the African Methodist Episcopal Zion Church.

Discipleship is an ongoing process, Starnes said, but if done right, it should be self-perpetuating.

“The reason that we nurture believers and equip saints,” he said, “is so that they can grow to the point of doing ministry that will reach the lost.”