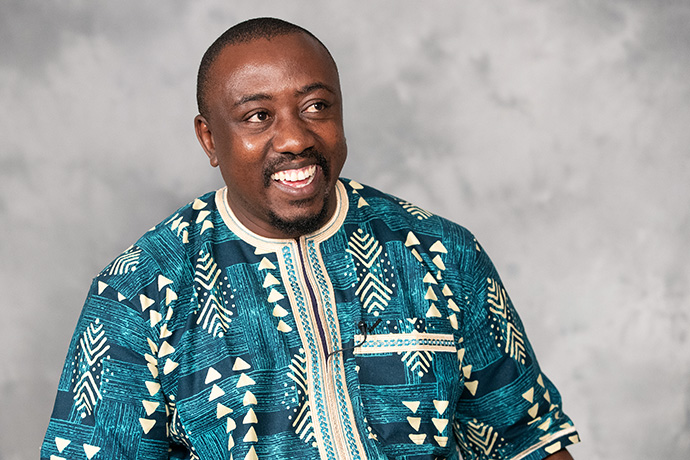 The Rev. Collins Etchi Ako, a United Methodist missionary serving in Congo, talks about some of the challenges he faces in his ministry. Ako visited Nashville in April. Photo by Mike DuBose, UM News.

Nine words spoken by John Wesley are the through line to the career of the Rev. Collins Etchi Ako, a United Methodist missionary serving in Congo.

"I look upon all the world as my parish,” the founder of Methodism wrote in one of his journals.

“When I heard this statement from John Wesley, I felt like this is my call,” Ako said.

Methodists are celebrating 100 years of ministry in eastern Congo. The first missionaries arrived there in 1922.

A native of Cameroon, Ako became a United Methodist in 2001 and began working closely with the Cameroon Mission in 2007. He has a special interest in ministries of justice and reconciliation and has conducted seminars on conflict management, peace, sustainable development and interfaith dialogue.

“Prior to becoming a missionary with Global Ministries, I served as the Volunteers in Missions coordinator for Cameroon,” Ako said.

During his recent visit to the U.S., Ako talked about his work with Tim Tanton, chief news officer for United Methodist Communications. The interview transcript has been edited for clarity and length.

A lot of the news that comes out of eastern Congo is difficult. What are the chief challenges that you face and that the church faces there?

The East Congo Episcopal Area is in a post-conflict reconstruction and church development context. The East Congo had long years of wars, so a lot of the road infrastructure, hospitals and schools were destroyed. It’s very challenging to move from one place to another.

The second challenge is these conflicts have not completely come to an end. You still have pockets of violence along the border with Rwanda, Uganda and Burundi. … The third challenge … is access to healthcare, potable (drinking) water and electricity. Take access to potable water, for example. Different populations end up with water-borne diseases that could be avoided if they had good access to potable water and access to health care.

How is The United Methodist Church making a difference?

The United Methodist Church is making a difference in terms of access to education. The East Congo Episcopal Area has Methodist schools that you have a big part of the population coming in to study, partly because of the quality of the education. But also I think it’s cheaper because of the support the school would get from the episcopal office through some partnerships.

We also offer accessible health care to different communities. If you travel through the East Congo Episcopal Area, you would see that The United Methodist Church has clinics in every other village, thanks to support from Global Ministries.

Some years before I got there, there was the program Imagine No Malaria, where The United Methodist Church would come in and share free mosquito nets. I think we started doing this before the state got into doing it, and we are sharing free mosquito nets even today. In an area where malaria is a pandemic disease, malaria is always present because the mosquitoes are always there. Keeping the mosquitoes away is a big plus.

People actually live on less than half a dollar a day, so when you get to look at the reality where people cannot afford health care, helping them not fall sick is a big plus because the chances that you would even come out of that sickness are very reduced.

The Rev. Collins Etchi Ako is a native of Cameroon, where he worked as a Volunteers in Mission coordinator before becoming a missionary with United Methodist Global Ministries. He currently serves in Congo. Photo by Mike DuBose, UM News.

How has the transition been for you, these last almost four years, going from Cameroon and serving in East Congo?

I would say the transition was challenging for me because I was getting into a context where they spoke, based on my understanding, French. I was looking forward to using my French, and then I show up and they use more of a local language. … Apart from that I would say our transition into that context has really been smooth, because prior to going there I had built these relationships at the international level with some people from the (Democratic Republic of the Congo) when I served as the program chairperson for the planning committee with the Young People’s Ministry. So, I had met a few leaders from that area. I had also traveled to (the city) Kinshasa in 2016 as a consultant with Young People’s Ministry to lead a workshop on conflict and development.

What has been your focus as a missionary in East Congo?

I’m supposed help with administrative duties, among which you have translation and interpretation from French to English, but also help with building new relationships and partnerships for the episcopal area. … At times some of the things you do, do not really directly relate to your job title or to your job description. … I’ve engaged in teaching ministries. For example, I lecture at the University of Kindu. It’s a Methodist university run by the episcopal area, which is really in need of lecturers. … I teach ecclesiology. I teach missiology, and also ecumenism. …

I also serve alongside the leadership of the orphanages to help them in their fundraising efforts. … I also do a lot of leadership training with young people in the episcopal area where I would come in to lead their workshops or just have one-on-one mentoring opportunities with different young people. So those are some of the things I do.

What would your message be to people in churches around the denomination as 100 years of missionary presence in the East Congo Episcopal Area is observed?

The connection is a blessing, and I would leave it at those few words.