With joy, United Methodists of the East Congo Episcopal Area commemorated the centennial of the church in eastern Congo.

During a special Feb. 22 service at the Cité Salama local church in the Kindu South District, East Congo Annual Conference, pastors and congregants danced and sang in celebration.

Due to the rainy season, activities planned for the centennial commemoration were postponed to July 2022 in Tunda, where the first American missionaries settled in 1922. 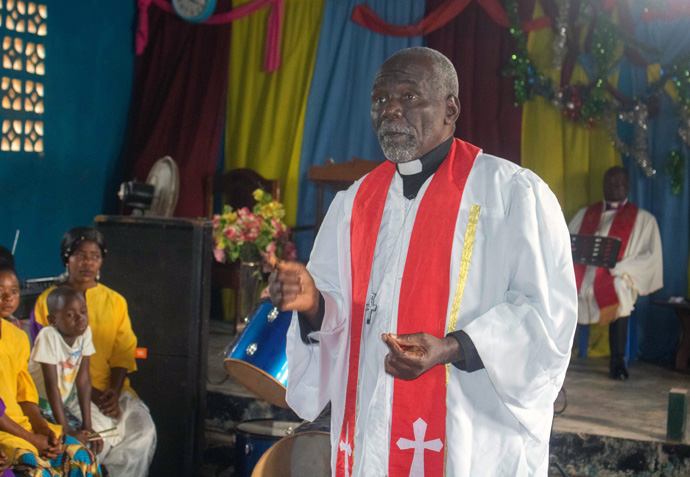 Pastor Kalema Tambwe, district superintendent of Kindu Sud, briefly explains the history of the United Methodist Church of Congo during the Feb. 22 service at the Chapel of the local church in Cité Salama in the Eastern Congo Annual Conference. A historian and author of a book on the history of The United Methodist Church in eastern Congo, Tambwe is also a member of the commission charged with preparing the centennial celebration in July. Photo by Chadrack Londe, UM News.

“The first missionaries arrived in Tunda through the village of Kombe Luhahi,” said Pastor Kalema Tambwe. “Chief Tunda Kasongo, the father, received them and gave them space in the Tunda village to settle.” Tambwe, a historian, has written a book on the history of The United Methodist Church in eastern Congo.

Tambwe explained that before the arrival of the American missionaries, Chief Luhahi -A- Niama Luhahi of the village Kombe Luhahi, not far from Tunda, crossed the Lomami River to make the first contact with the missionaries in Wembonyama. Because the water was of poor quality, Chief Luhahi contacted Chief Tunda Kasongo so that the missionaries could settle in Tunda.

In “History of the Methodist Church in the Central Congo,” author Michael Kasongo said the reason for abandoning Kombe and moving to Tunda is not known. “The missionary journals and annual reports give no explanation for the change,” he added.

Kasongo speculated that the decision was made for strategic reasons. “Most former missionaries in central Congo agree that Tunda was chosen because of its geographical location between the station of Wembo-nyama and the railway town of Kibombo, 60 kilometers [37 miles] from the present state of Tunda,” he wrote.

“In addition,” he said, “the Tunda area seemed to offer a better opportunity in terms of the large concentration of populations in the villages between Tunda and Kibombo. The missionaries expected mass conversions among these populations, and eastward expansion would have been more difficult from Kombe than from Tunda.” 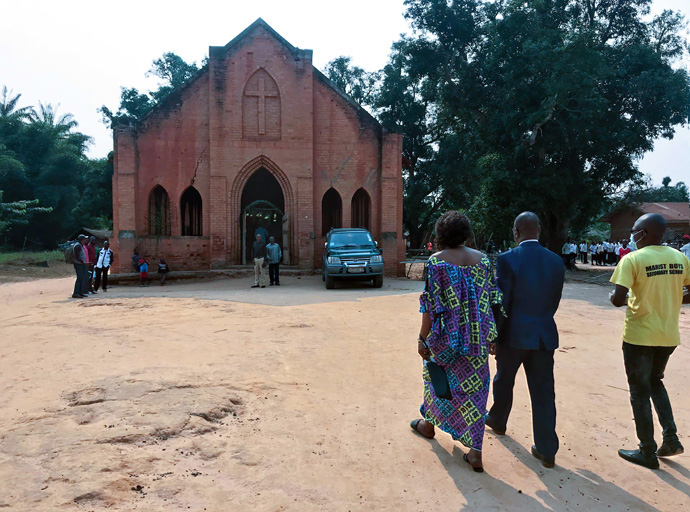 East Congo Episcopal Area Bishop Gabriel Yemba Unda noted, “The hundred years of evangelization mark the maturity of a people of a whole generation. We are happy to see that among those who welcomed the missionaries, there are still people alive who would like to share with the new generation what February 22, 1922, was.”

Shaku Tunda, 84, is the grandson of the chief who welcomed the missionaries. The grandfather of the current Chief Customary Prosper Tunda Lukali, he has kept the alliance between his family and the American missionaries for 62 years.

The East Congo Episcopal Area occupies 14 of the 26 provinces of the Democratic Republic of Congo.

Unda said he is pleased that evangelization in eastern Congo is growing.

“The work done by the missionaries in 1922,” he said, “is bearing fruit, and now, 100 years later, we occupy practically the entire eastern part of the Democratic Republic of Congo. The church in the eastern Congo continues to do the work, and the gospel has crossed the borders to reach the Central African Republic, where the eastern Congo now has a mission called the CAR Initiative.” 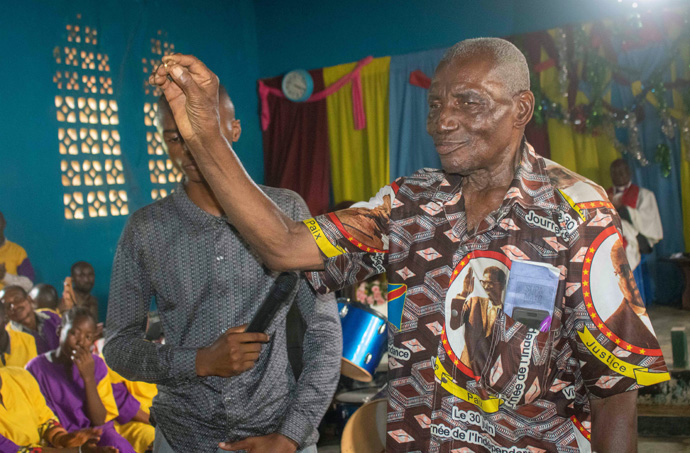 Shaku Tunda, the grandson of the chief who welcomed United Methodist missionaries to Tunda, Congo, shows a ring that symbolizes the covenant made between the church and his grandfather, Chief Kasongo Tunda. (Shaku) Tunda, who is also the great-brother of current customary chief Prosper Tunda Lukali, kept the covenant between his family and the American missionaries for 62 years. Photo by Chadrack Londe, UM News.

In the July celebration, Tambwe will recall the session of the executive committee of the Central Conference of Congo, the caravan of peace of the United Methodist Commission on Religion and Race in the fight against tribalism, the dedication of the General Hospital of Reference of Tunda and the laying of the first stone for the church.

Dr. Philippe Okonda, lay leader of the East Congo Episcopal Area, said he was happy to participate in the preparations.

“It is a way for me to pay homage to these American missionaries who evangelized the eastern Congo,” he said. “Considering the extent that our episcopal region occupies today, we say a big ‘thank you’ to the missionary couple, who sacrificed their life with their children, to come and evangelize the people of God of the East Congo from Tunda.”

Rehabilitation work of the villas, built in Tunda by the first missionaries, started a few months ago. Two families descended from Chief Luhahi -A- Niama and Chief Tunda Kasongo are financing the project.

Lukali, a United Methodist, currently reigns as king of Tunda. He said his family will help finance the rehabilitation of some of the villas.

“We of the Tunda family through its foundation and the Luhahi family are committed to accompany the church and the Congolese state in several activities through the rehabilitation of road infrastructure, rehabilitation of missionary villas [and] rehabilitation of schools for the glory of our God,” he said. Lukali is also a national deputy elected from the territory of Kibombo in the Maniema province.

Professor Jacqueline Luhahi, granddaughter of Chief Luhahi -A- Niama, chairs the commission for the centenary preparations.

“We even have the joy of the construction of the city of centenary in Tunda,” she said, “to value even more the first mission of evangelization in the eastern Congo. We have the joy, with the Tunda family, to rehabilitate the doors and windows of the villas built by the missionaries in Tunda.”

She encouraged the faithful who want to leave their footprints in Tunda to build a house in their own name.

“In the centennial city,” Luhahi said, “we allow anyone to build a house that will bear their name. This is a way for us to allow each person to leave their mark for many years because each house built will bear the name of the person who funded its construction.”

The initiatives of these two families delight Unda. “These families honor me,” he said, “by the different works of rehabilitation of the villas built by the missionaries, the culture of songs, the construction of churches by their own funds, to name only a few.”

The Luhahi and Tunda families organized a gala dinner in Kinshasa to mobilize funds to finance the celebration.

“We have the joy of organizing this dinner to show once again the partnership of The United Methodist Church, the Congolese state, the Tunda family through its foundation and the Luhahi family,” said Charles Dimoke Dimbu Tunda, a descendant of Chief Tunda Kasongo.

Unda said he was pleased to participate in the gala dinner. “I am delighted with the collaboration of The United Methodist Church in eastern Congo with the ruling families who received the missionaries for the very first time in Tunda,” he said.

“For several decades, The United Methodist Church in eastern Congo has worked closely with the Congolese state in the construction of schools, hospitals, health centers, orphanages and more,” Unda added. “For several more decades, the church will continue to work on the social level to improve the daily lives of local communities.

“I invite you to come and celebrate with us the centenary of Tunda in July 2022. There is room for everyone.”

Londe is a communicator and editor in the Congo Central Conference, and Osongo is the communications director of The United Methodist Church in East Congo.