The feedback to the Commission on a Way Forward gives a sense of the task ahead.

The commission asked various United Methodists to describe their constituency’s “preferred future for our denomination regarding the nature, conditions and extent of the inclusion of LGBTQ people within the church.”

The 32-member commission will sift through the responses when it meets starting July 19 through July 21. The group’s fourth meeting is closed to the public and takes place at an undisclosed location in the Chicago area.

General Conference in 2016 authorized the bishops to form the commission with the goal of finding “new forms and structures” that would allow unity in a church deeply divided over homosexuality. The commission is charged with completing an “examination and possible revision of every paragraph in our Book of Discipline regarding human sexuality.”

Among those asked for feedback were unofficial advocacy groups and the 13 general church agencies as well as various local church pastors, lay leaders and seminary students. The commission sent out questionnaires and in some cases held focus groups. Each central conference — church regions in Africa, Asia and Europe — decided its own process for gathering input.

The responses that groups released publicly or shared with United Methodist News Service show the different visions members have for the church they love. 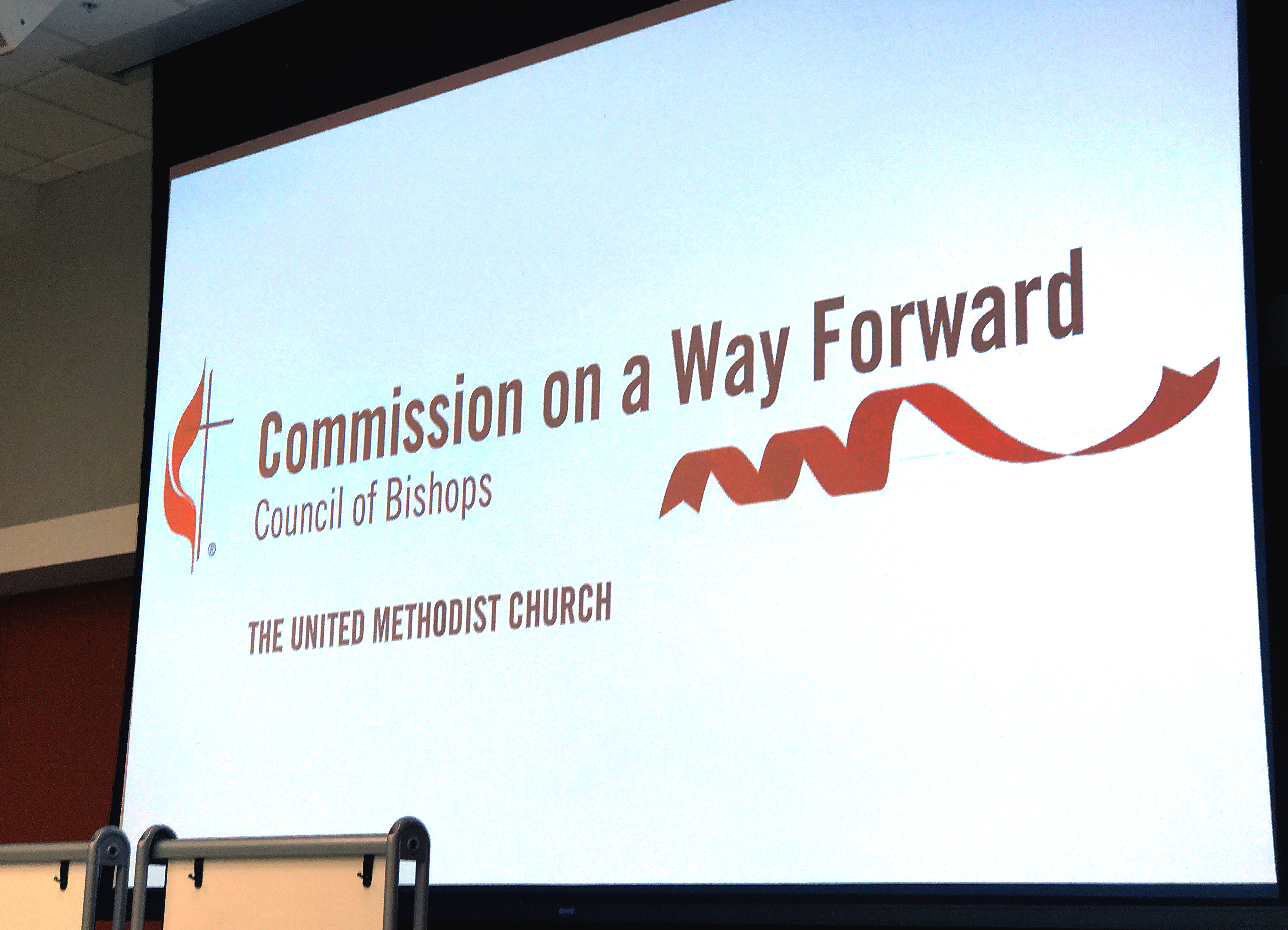 The logo for the Commission on a Way Forward is projected onto a screen during the group’s first face-to-face meeting in January 2017. Photo by Diane Degnan, United Methodist Communications.

For some United Methodists, the future requires nothing less than enforcement across the board of the denomination’s bans on same-gender unions and “self-avowed practicing” gay clergy — no local variation.

Good News, which has long advocated for maintaining those prohibitions, said in its statement that leaving such matters up to local congregations, conferences or jurisdictions “is not a viable solution.”

“It may be hard for progressives and centrists to understand, but many, if not most, traditionalists cannot participate in a church that allows its pastors and bishops to promote something they believe to be sinful even if they themselves are not required to do so,” the group’s statement said.

The newly formed Wesleyan Covenant Association, echoing a statement from its first meeting in October, urged the commission “to propose a plan that calls for accountability and integrity to our covenant, and restores the good order of our church’s polity.”

The Rev. Thomas Lambrecht, a leader in both Good News and the Wesleyan Covenant Association, is a member of the Way Forward Commission.

For other United Methodists, the denomination’s future requires nothing short of full inclusion of LGBTQ individuals in all aspects of church life, including ordination and marriage.

Love Prevails, in its statement, said, “The only proper and Christian corrective to the unjust and prejudicial treatment our people have received at the hands of The United Methodist Church is the full and complete removal of all language in the Book of Discipline which categorically discriminates against LGBTQ people.”

The Queer Clergy Caucus, which has about 195 members, echoed that message in a video to the commission. Specifically, the group took issue with a ruling by the denomination's top court that says a same-sex marriage license can be seen as evidence of sexual activity.

The Rev. David Weekley, speaking on behalf of the group, said its preferred future for LGBTQ people in the denomination is the sames as its "preferred future for all — to fully and authentically respond and embrace the prevenient grace of God through baptism, membership in community, and response to vocational call."

“As equals at the table, we look forward to communion and conversation with all in a church where everyone is free to pursue ministry according to their convictions and context,” the video said. “We believe God will be faithful to us all, sustaining us in new ways of doing ministry and being church that will lead to fresh expressions of God’s expansive love.”

Dave Nuckols, a network board member, and Matt Berryman, the network’s former executive director, are both commission members. The commission has at least three openly gay members, including Berryman.

Still other United Methodists insist the commission cannot reconcile such divergent views and should move ahead to plan some form of separation. The Confessing Movement within The United Methodist Church puts forth that view in its statement.

“The commission must free itself of thinking of unity in terms of the denomination if it is to accomplish its purpose to ‘move us beyond the impasse over the nature, conditions and extent of the inclusion of LGBTQ people within the church,’” the group said.

“If we affirm Scripture and tradition on the issues that divide us, we may live in communion but not under common governance,” the group added.

The Wesleyan Covenant Association and Good News also raise the possibility of separation. Good News suggested some form of connection might be possible including a shared pension board, publishing house and United Methodist Committee on Relief.

However, the advocacy groups represent only a portion, albeit the most public, of the feedback to the commission. A number of pastors of large- and mid-sized United Methodist churches have expressed alarm at the prospect of such a split — especially if it means their congregations must vote on whether to align with a traditionalist or progressive side.

In many churches, people with differing views on homosexuality attend church and do mission together side by side. In some cases, even married couples in these churches strongly disagree on the matter.

The Rev. James Howell, senior pastor of 5,000-member Myers Park United Methodist Church in Charlotte, North Carolina, wrote a blog arguing against such a divide. He was also among the pastors who responded to the commission. Though he can’t remember his exact words to the panel, Howell told UMNS he sees churches like his can be models for a way forward.

“We’ve been clear that we have a division of opinion on this issue, which we have aired openly, and are staying together quite well as a congregation embracing that disagreement,” he said. “Our preference would be one, for the denomination to do what it’s unlikely to do, and that is to acknowledge divergent approaches on this issue and let that be —  as we do on dozens of other contentious issues, and so then two, not to be forced to choose.”

The Rev. Adam Hamilton is the lead pastor of the best-attended United Methodist congregation in the U.S., Church of the Resurrection in Leawood, Kansas. He also championed both the formation of the Way Forward commission and a proposal to let local churches decide whether to host same-sex unions and welcome gay clergy.

“How have our lay people managed to stay in one church despite their differences over the question of same-sex marriage?” he told UMNS. “Love, mutual respect and enough humility to say, ‘Though I don’t think so, I could be wrong.’ What unites us — our love for Christ, our theological convictions, and our living of the gospel — is much greater than what divides us.”

He added that he personally would like to see the Discipline changed “to recognize that United Methodists disagree on how we interpret the Scriptures regarding same-sex relationships, and to create the space that allows pastors to exercise their pastoral ministry and ordination according their conscience and convictions regarding same-sex marriage.”

Most agencies did not make their responses public. The Discipleship Ministries board plans to shares its response with commission members visiting its quarterly meeting next week.

United Methodist Communications, which encompasses UMNS, said in its statement that the agency strives to be objective and neutral in providing church members with information, news and resources “that represent the gifts and stories of the entire church.”

“As an agency, we hope to follow wherever the Spirit leads the church and tell the continued story of God’s work through our local churches while doing so,” the agency said.

Ultimately, anything the commission proposes will first go to the Council of Bishops, which will put together a report based on the commission’s proposals. The bishops have called a special General Conference to take up that report on Feb. 23-26, 2019, in St. Louis.