The Judicial Council’s recent ruling against the consecration of a gay bishop likely has consequences for United Methodists far beyond one bishop.

A key part of Decision 1341 is that a “same-sex marriage license issued by competent civil authorities together with the clergy person’s status in a same-sex relationship is a public declaration that the person is a self-avowed practicing homosexual.”

The decision goes on to say that a clergy member can present evidence to rebut this presumption of sexual activity in a same-sex marriage. But the possible rebuttal can only happen within the context of a formal administrative or judicial process of review. 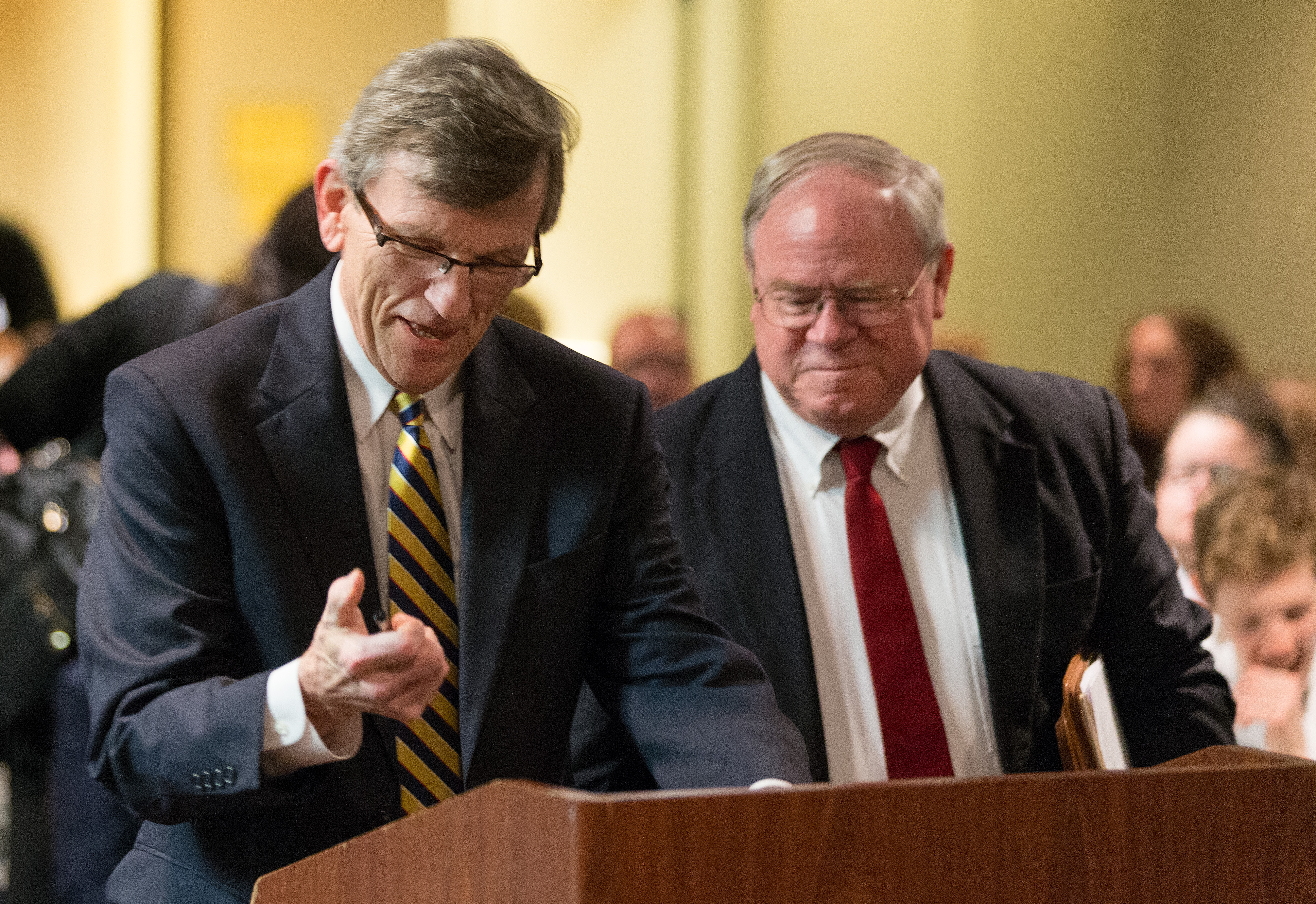 This marks the first time the denomination’s supreme court has weighed in on same-gender marriage licenses since the U.S. Supreme Court in 2015 established same-sex civil marriage as a constitutional right.

The court’s majority opinion does not name Bishop Karen Oliveto, the denomination’s sole openly gay episcopal leader. It was her election and consecration in the Western Jurisdiction that prompted a petition to the Judicial Council. For now, Oliveto, who is married to a deaconess, remains bishop of the Mountain Sky Area while her ministerial office is under review.

In the meantime, other clergy and clergy candidates also could feel the impact of the Judicial Council’s ruling. A year ago, more than 100 United Methodist clergy and clergy candidates came out as gay in the lead up to General Conference, the denomination’s top lawmaking assembly where views on homosexuality are a recurring topic of debate. At this point, about 180 clergy openly identify as LGBTQ.

On the same day it ruled on a gay bishop’s consecration, the Judicial Council also released two opinions instructing United Methodist boards of ordained ministry to examine all qualifications of ministerial candidates — including whether they practice “fidelity in marriage and celibacy in singleness.” The church defines marriage as solely between a man and a woman.

Lonnie Brooks, a former Alaska lay leader who wrote a brief in support of the Western Jurisdiction, called the marriage-license decision “sweeping in scope.”

“It removes whatever cover LGBTQ people thought they had in refraining from public avowals of their relationships and activities,” Brooks wrote in an analysis of the ruling. If a legal record of marriage exists, he added, any gay clergy member would now be vulnerable to “prosecution and removal from office and denial of livelihood.”

How the Complaint Process Works

The Judicial Council’s ruling in Decision 1341 also stated that a bishop remains in “good standing” while undergoing the complaint process.

The Western Jurisdiction College of Bishops announced it would carry out that process as outlined in the Book of Discipline, the denomination’s book of law and teachings.

Complaints against bishops usually are handled by the College of Bishops in the jurisdiction or central conference where they are elected. But in 2016, General Conference approved two measures that potentially change the process.

The first is a constitutional amendment, now being voted on at annual conferences, that allows the Council of Bishops to hold individual bishops accountable. To be ratified, the amendment must win at least a two-thirds majority of annual conference voters around the world.

The amendment addresses a 1980 Judicial Council ruling that struck down as unconstitutional a measure that required the Council of Bishops to hold members accountable.

The second is legislation that alters the complaint process against bishops.

The revised Paragraph 413.3 in the Book of Discipline now sets a definitive timeline of 180 days to try to resolve a complaint in the denomination’s supervisory process within the College of Bishops. If that doesn’t happen, the matter moves the Council of Bishops, which then selects a panel from their number to adjudicate the matter.

The Book of Discipline also now allows the Council of Bishops — at any time in the complaint process, including after a just resolution — to remove a complaint from a College of Bishops by a two-thirds vote.

It is unclear whether this revised complaint process could withstand Judicial Council scrutiny without the constitutional amendment.

Oliveto told the United Methodist News Service that the ruling “not only has an impact on gay clergy and candidates for ministry; it redefines marriage for the whole church.”

“It sends a message that marriage is no longer about ‘love, mutual support, personal commitment, and shared fidelity’ but reduced to sexual acts,” she said. “People — gay and straight — marry for many reasons. To narrow the definition in this way does a disservice for the way the miracle and mystery of love — which is born of God — draws two people together to build a life together.”

The Book of Discipline, the denomination’s book of church law and teachings, has stated since 1972, that all individuals are of sacred worth but the practice of homosexuality “is incompatible with Christian teaching.”

However, it wasn’t until 1984 that the denomination prohibited the clergy candidacy, ordination and assignment of “self-avowed practicing homosexuals.” Oliveto, who told National Public Radio that she came out in seminary, became a probationary member in 1982.

The combination of the words “self-avowed practicing” is key. The denomination has never banned people from clergy orders simply because they are gay. It also does not ban transgender clergy. The ban has been against same-gender sexual activity.

Over the years, the denomination has at times struggled to define what evidence meets the threshold of “self-avowed practicing.”

In a footnote, the Book of Discipline defines “self-avowed practicing” to mean that a person openly acknowledges to United Methodist leaders, such as a bishop or a board of ordained ministry, that he or she is a “practicing homosexual.” The footnote refers to earlier Judicial Council opinions on the matter.

The Rev. William B. Lawrence, former Judicial Council president, said under that standard, simply having a conversation with a lay member of a local church wasn’t enough.

Now, Lawrence expects, some church authorities may look to see if someone they suspect is gay has a marriage license.

However, he suggested “it would behoove all of us United Methodists to relax a bit and try to find a way not to have an ‘us vs. them’ dialogue about the hot-button issues in the life of the church.”

Lawrence, a professor of American church history and retired dean of Southern Methodist University’s Perkins School of Theology, wishes the church would instead focus on its basic mission statements, including the commitment to personal and social holiness.

The Rev. Robert Zilhaver, a Western Pennsylvania Conference pastor who has argued cases before the Judicial Council and wrote a brief in the gay bishop case, offered a different perspective.

The Rev. Lea Matthews, a provisional deacon in the New York Conference, was among the clergy candidates who came out last year. She also is a member of the Queer Clergy Caucus. Her message is that LGBTQ clergy are not going anywhere.

“We, the Queer Clergy Caucus, are standing steadfast in our commitment to each other, to the Wesleyan tradition and to the gospel of Christ,” she said. “Along with our families and allies, we will continue to resist. Nonconformity of unjust laws is the only way forward.”

Even as the debate rages on, the Commission on a Way Forward continues its work to try to find a way for a denomination deeply divided around homosexuality to have some sort of future together. United Methodist bishops have called a special General Conference on Feb. 23-26, 2019, to consider a report based on the commission’s recommendations.

The two attorneys who represented the differing sides in oral arguments have each written commentaries about Decision 1341.

The United Methodist chancellors, who serve as attorneys for the denomination’s annual conferences, issued a statement in the wake of the Judicial Council’s ruling. The chancellors urge “all persons, congregations, districts, conferences and organizations of The United Methodist Church to refrain from any action that would prejudice the ability of the Commission on a Way Forward and the special session of the General Conference in February 2019 to preserve our denomination as one.”

The Rev. Thomas E. Frank, a historian of Methodism and author of the frequently used textbook Polity, Practice, and the Mission of The United Methodist Church, disagreed with the Judicial Council’s ruling in Decision 1341 but holds out hope for the Way Forward Commission.

“I continue to be absolutely convinced that for the vast majority of United Methodists, differences of opinion about human sexuality do not rise to the level of church-defining essentials and are not a constitutional matter that necessitates legally dividing the church,” he said. “There is nothing in our constitution about sex and sexuality. I hope the commission will design a path for our church to stay together.”