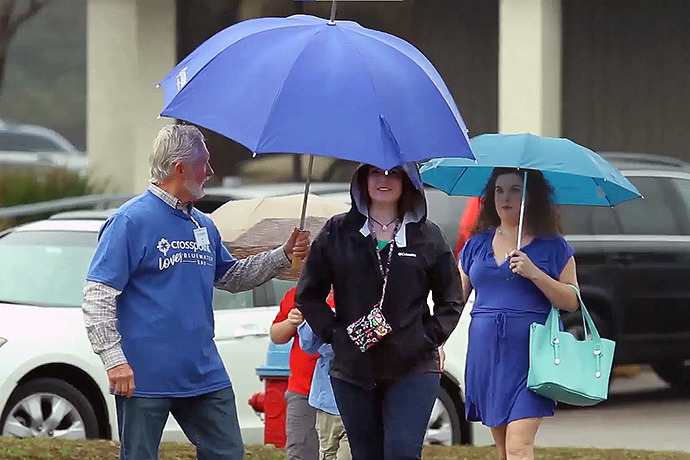 A volunteer holds an umbrella for a woman at Crosspoint, a United Methodist church in Niceville, Fla. Ninety percent of the congregation at its South Crestview campus volunteers in some capacity. Video image courtesy of Crosspoint via Vimeo by UM News.

• The Rev. Lisa Ausley, an associate pastor at a church with five campuses in Florida, is laser-focused on volunteerism.

• 90% of the regular churchgoers at the South Crestview campus of Crosspoint volunteer in some fashion.

• Three volunteers are now in seminary.

Sometimes it’s the serious business of listening to a troubled soul vent their frustrations over health or relationship issues. Other times, it’s taking a senior citizen to get her toenails clipped and polished. 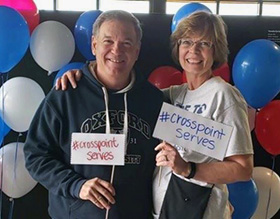 Phil Estrem does both, as an active member of the South Crestview campus of Crosspoint, a United Methodist church in Niceville, Florida.

“I guess it's just a question of looking for things that I can do,” Estrem said. “I'm not a rocket scientist. I'm not a brain surgeon. I can't do electronics.

“But if somebody needs to be taken somewhere, I can do that.”

Estrem speaks most evenings with 96-year-old Martha Lambert, who lives in an assisted living facility.

“She can't drive, so one of the things I do is … pick her up and get her over there for her nails to be done.”

The South Crestview campus, one of five operated by Crosspoint, has a 90% volunteer rate of adults who attend services. Average attendance is 402.

The Rev. Lisa Ausley, associate pastor at South Crestview, is primarily responsible for the emphasis on volunteerism there. One of her favorite anecdotes involves an atheist who spent time at the church in support of her husband, who volunteered as a drummer on the church worship team.

“She came with him every Sunday, and I began to ask her what her passions were,” said Ausley, whose husband, the Rev. Rurel Ausley, is lead pastor at Crosspoint. “She loved to crochet, and she also had a real passion for the homeless.”

The woman agreed to teach interested people in the church how to crochet plastic bags from Walmart into mats used by homeless people to keep moisture away from their sleeping bags.

“She got involved with a community of women who love Jesus,” Lisa Ausley said. “She got to working alongside them, shoulder to shoulder, and eventually, she wanted what they had. And she accepted Christ. That's the power of volunteerism.” 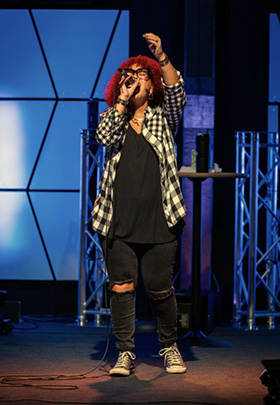 When someone starts serving Jesus, “they just come alive,” Ausley said. “The power of the Holy Spirit engages with their lives, because they're doing holy work.”

Sharesse Warfel and her husband, Donny, moved to Florida from New Mexico nearly three years ago. They lead the contemporary worship service at South Crestview, occasionally help with youth worship meetings and participate in a small group of about seven couples who focus on improving their marriages.

“I'm amazed at how well they rally people and how quickly they get them plugged in,” said Warfel, a mother of three. “We absolutely don't have any family here, so they have become our family here in Florida.”

Volunteerism actually improved at South Crestview during the coronavirus pandemic, because people stuck in their homes wanted to make a difference, Ausley said.

“During that season, we started lots of new ministries and upgraded lots of ministries that were touching the community,” she said, “like food giveaways. We were cooking meals at the church and delivering meals to homes of sick families.”

South Crestview also started ministries to call and send cards to church members who might be suffering from lack of human contact.

“We called everyone on our database to check on them, see how they were doing and pray with them over the phone,” Ausley said. “So, of course, that took a lot more volunteers. We tried to pivot and do things differently.”

Estrem volunteers as a Stephen Minister, available to listen to people who are suffering, one-on-one, as long as it takes.

“All churches have people who are in desperate need of one-on-one care,” he said. “Not counseling. We're not there to be psychologists or psychiatrists.

“Our model is we provide the care. Jesus provides the cure.”

The Stephen Minister and troubled person usually meet once a week for an hour. Some have been meeting for three years or more.

By allowing the care receiver to share “one of those times when they’re in the dark or in the pit,” Estrem said, every once in a while the Stephen Minister gets to witness a breakthrough.

“They'll come up with some things and the onion gets peeled back another layer,” he said. “The neat thing is if you talk to anybody who's a Stephen Minister, we get more out of it than the people we're serving.” 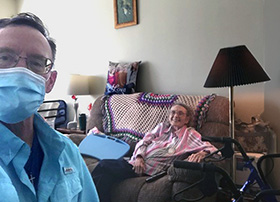 Phil Estrem (left), a volunteer with the South Crestview campus of Crosspoint, a United Methodist church in Niceville, Fla., regularly visits Martha Lambert to take her to her pedicure appointment. Photo courtesy of Phil Estrem.

Ausley often helps people find what she calls “the sweet spot,” meaning the most rewarding volunteer activity for them. Young people looking for volunteer hours for college applications are welcome.

“My heart is to make sure every single person gets in their place of effective ministry, because of what it does for the individual,” Ausley said. “When individuals are excited about their faith and they're growing, the church grows.”

Some volunteers have discovered their profession through volunteering at South Crestview, Ausley said.

“We have people who become preschool teachers because they found how much they enjoy children's ministry on Sunday mornings,” she said. “They go off and get their certifications and the credentials they need to teach in our preschool.”

Two of Ausley’s sons are engineers who got started on that path through volunteering in the audio-visual department at South Crestview, she said. One even got a scholarship because of a relationship he struck up while volunteering.

“That’s a sweet spot for me, mentoring women. I have three women who are starting seminary classes right now. All of that is flowing out of ministries they've gotten excited about being involved in the church.”

Every follower of Christ needs to be involved in ministry, Ausley believes.

“I think it's easy for us not to want to give away ministry because ministry's so fulfilling,” she said. “But as you give it away, it gets done with more excellence, more gets done and more people are brought into the kingdom.”

United Methodists continue to scramble to provide aid to war-displaced people in Ukraine and surrounding countries. One recent challenge: Finding new housing for displaced people in western Ukraine who had been using a school as shelter.
Disaster Relief

Despite challenges like the gasoline shortage and having to pay customs clearance and taxes on goods, churches in Poland, Romania, Slovakia, Hungary and the Czech Republic continue to help refugees and send supplies into Ukraine.
Local Church

A fort made up of 700 pillows got people reconnected at Lake Harriet United Methodist Church in Minneapolis, Minn. The effort ended with three Federal Express trucks full of pillows headed to homeless ministries. Christa Meland with the Minnesota Conference has the story.