Put yourself in the place of the Rev. Chenda Innis Lee last December.

You are a lifelong United Methodist with 10 years of experience ministering in the Virginia Conference. You are excited about your new job as associate pastor at Fairlington United Methodist Church, a predominantly white congregation and a reconciling church outside of Washington, D.C.

You are also a Black woman born in Liberia, Africa, who moved to the U.S. as a child.

“I returned from Atlanta from seeing my sister,” Lee recalls. “Around that time you’re receiving Christmas cards, so I checked my mailbox here at the church.”

She found an anonymous letter criticizing the earrings she wore while leading virtual church services one Sunday, calling them “distracting” and “discomforting.”

She pulled up the video. Her earrings were about the size of dimes.

Lee, 41, chose to respond playfully; she worried that if she capitulated there would be further demands.

“When I started here, I had like fiery red-orange hair,” she said. “It’s my hair and it’s what I wear. So where will it end?”

So Lee went out and bought bigger earrings.

“My initial reaction was, ‘Hey, if you’re complaining about these little earrings, wait ’til you see what I have in store,’” she said with a laugh. “I started wearing them every Sunday.” 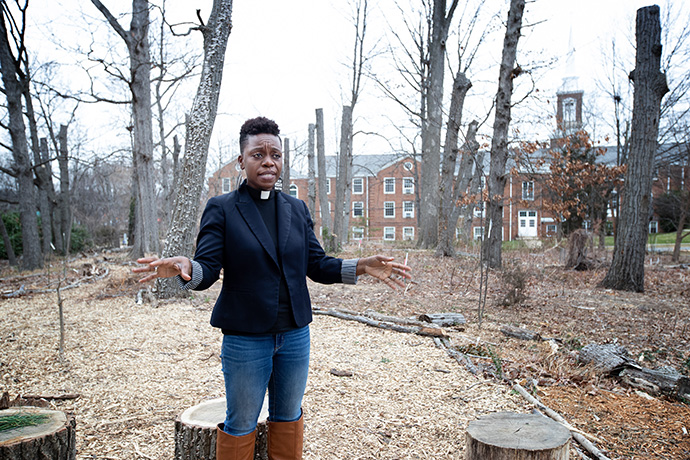 The Rev. Chenda Innis Lee walks through the outdoor worship space at Fairlington United Methodist Church in Alexandria, Va., where she serves as associate pastor. Lee announced a “Do No Harm” initiative asking for measures to combat racism after she received anonymous letters criticizing her appearance.

“I love to explore with beauty ideas and things like that,” she said. “Those are kind of self-care practices for me as well.”

The Rev. Janine Howard, lead pastor at Fairlington, said church members were overwhelmingly supportive of Lee when they learned about the letter. At that point, nobody was overly concerned. Howard planned to post a letter to church members in response.

“I hate to say this, but it is all too common,” Howard said. “The first letter was more what female clergy are used to having to put up with.”

'Do No Harm' suggestions

The Rev. Chenda Innis Lee has four suggestions as part of her “Do No Harm” campaign. They are:

• Conduct annual anti-racist and diversity training for members of each bishop’s cabinet.

• Establish a Cross-Racial-Cross-Cultural Ministry Task Force to lead mandatory anti-racist and diversity training workshops for local churches receiving cross-racial-cross-cultural appointments immediately and a plan to do this in all local congregations by 2024.

• Create a staff position that focuses on diversity, inclusion and equity training for each annual conference.

Before the church’s response was published, a second letter came four days later. Also anonymous, it was mailed to Howard but still addressed Lee’s fashion choices. It claimed that, “I and many other church members … are dismayed by what we are seeing every Sunday.”

“We are a progressive church, but we are NOT a ‘hippy’ organization,” said the letter. “I’m referring to your image with, most recently, a nose ring and blue jean jacket. … Too, your hair style leaves one wondering are you a teenager or an adult fanatic?”

As a reconciling church, Fairlington is associated with the Reconciling Ministries Network — an unofficial United Methodist advocacy group that seeks full equality of LGBTQ individuals in the life of the church.

The letter ended, “Your messages are excellent. If you could become one of us figuratively, our relationship will be much better.”

Ashley Moore, a lifelong member of Fairlington and member of the staff-parish committee, said the letters did not take her by surprise.

Howard saw the second letter as “escalation” of the issue of Lee’s appearance. “What was disturbing about it was the ‘You need to do something about this’ tone,” she said.

Lee felt the letter had “a racial undertone to it.”

“A friend of mine described it as ‘perfect racism,’” Lee said. “When you read … that ‘We are not a hippy organization,’ it’s just another way of saying ‘We’re not ghetto.’ Just that way of trying to police a Black woman and who she is in a space that is predominantly white.”

“I was not naïve enough to think that something like this couldn’t happen,” Moore said. “I knew that (getting a Black pastor) was a new experience for us, and it would likely bring up the inherent racism that white people have. … I figured that we would need to face some difficult things, and so the letter just brought that to life.” 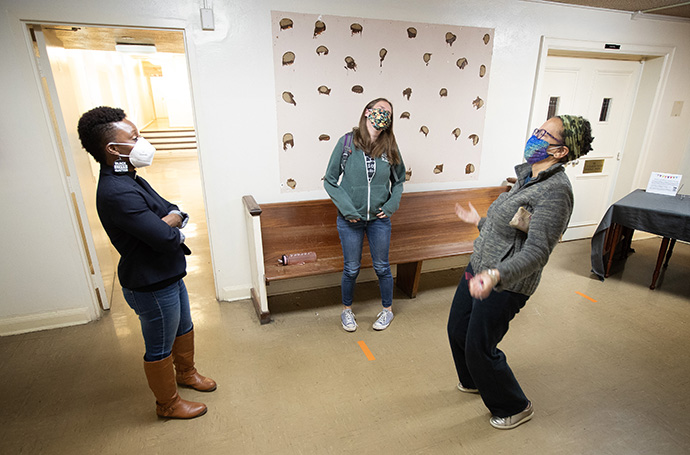 The second letter made it clear the church had a serious issue, said Tracy Jefferson, another member of the staff-parish committee who has attended Fairlington for three years.

“There is an expectation that new people … up to and including a new pastor, accommodate themselves or change themselves to what Fairlington expects,” Jefferson said. “So I think there was that sense here, that she needed to change herself to fit in.”

The racism suspicions are buttressed by an incident that happened before either of the letters were received, Howard said.

“There’d been an incident at the end of a Zoom worship service back in September when somebody who didn’t realize they were still on (an open microphone) said something that we’re pretty sure was directed at Chenda,” Howard said. 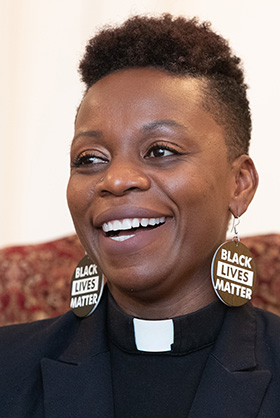 The Rev. Chenda Innis Lee.
A lifelong United Methodist, the Rev. Chenda Innis Lee was born in a rural village in Liberia in West Africa. She was baptized at 2 months old by her uncle, a pastor in the denomination.
“Methodism is in my blood,” Lee said. “I come from a line of preachers, so it was inevitable for me to follow in this path.”

Lee’s father, retired Bishop John G. Innis, was director of a rural mission school that also served as a rescue center for displaced people fleeing the cities during the early 1990s civil war in Liberia.

“In 1993, our home, our safe haven, was raided by rebels,” Lee said. “So we had to leave and move to Monrovia, the capital city of Liberia.”

Before being elected bishop in 2000 and assigned to the Liberia Area, her father was offered a job with the United Methodist Committee on Relief in 1996, and moved the family to the U.S. Chenda was 16.

The Lees have four children, all daughters.

The comment was along the lines of “she” had been “indoctrinated” and “didn’t like white people,” although Howard said she doesn’t remember the exact wording. Lee was the only obvious target for such comments, but her name was not said.

“This had to be dealt with promptly,” Howard said. “So it was a hard conversation.” Also, a congregational letter was posted about the incident.

Lee said she has had race-based encounters at other churches she served.

Before she started one new appointment, a member of her new church sent some Facebook postings by Lee about racial justice to her district superintendent, and asked that she not be appointed there. When she was appointed anyway, some members of the church would not enter the sanctuary on Sundays when Lee was preaching. Once, someone who disagreed with her sermon berated her in the greeting line after the service.

“I am an African woman,” Lee said. “So phrases like, ‘You’re very articulate,’ you speak so well, you dress so well’ are what people call a microaggression. But there’s no such thing as a microaggression. Any form of aggression is aggression … and those are things that no person should have to be dealing with in their work spaces.”

In an open letter sent to the United Methodist College of Bishops of the Northeastern, Southeastern, North Central, South Central and Western jurisdictions in the U.S., Lee announced her “Do No Harm” initiative and asked for several measures to combat racism, including that primarily white congregations undergo diversity training before a pastor of color arrives.

Her call comes alongside the denomination’s “Dismantling Racism: Pressing on to Freedom” initiative, launched in June of 2020 after the deaths of African Americans in police custody sparked protests all over the U.S. and beyond. The campaign includes participation from the Council of Bishops, the Commission on Religion and Race, United Methodist Women, Discipleship Ministries, the Board of Church and Society and United Methodist Communications.

“As an African-American woman, Bishop Lewis identifies with many of Rev. Lee’s experiences,” White said. “Bishop Lewis is also confident that addressing racism and sexism in the church is a high priority within the conference, the Southeastern Jurisdiction and the Council of Bishops.”

Lee shared her experience at Fairlington with district superintendents during the spring cabinet meetings, White said, noting that Lee’s concerns are in line with work already underway in the conference.

Lee is now preparing to move to Pittsburgh with her husband, the Rev. Asa Lee, who starts work as president at Pittsburgh Theological Seminary this summer. She will only be at Fairlington through June, but is hoping her “Do No Harm” campaign will result in change in racial attitudes in the denomination.

“I have four daughters,” Lee said. “I want them to grow up in a society where these issues are not what they are dealing with as they become adults.” 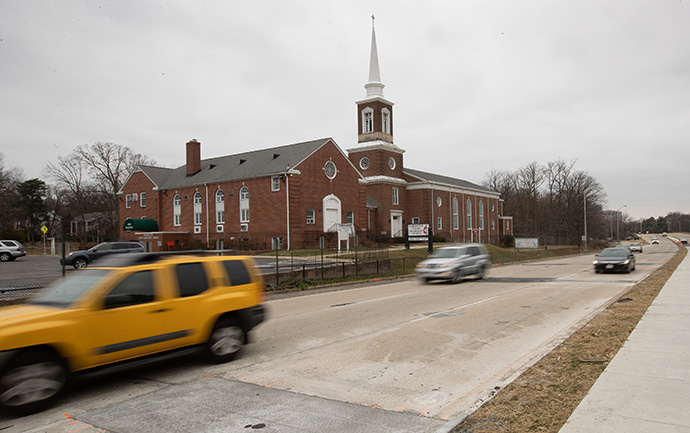 Fairlington United Methodist Church in Alexandria, Va., is a predominantly white congregation in the suburbs of Washington, D.C.

Patterson is a UM News reporter in Nashville, Tennessee. Mike DuBose is staff photographer for UM News. Contact them at 615-742-5470 or [email protected] To read more United Methodist news, subscribe to the free Daily or Weekly Digests.

Even after the passage of civil rights laws, a white teen found change slow to come in the rural South of the 1970s.
Local Church

A study of more than 20,000 United Methodist churches in the U.S. found that multiracial churches had higher worship attendance over time.
Social Concerns

A traumatic childhood memory, repressed for 40 years, came back to force United Methodist deacon Constance Hastings to confront racism in her upbringing.