Down the street from First United Methodist Church is the majestic Wasatch Range. Tall glass and steel office towers surround the little church just blocks away from the massive headquarters of the Church of Jesus Christ Latter-day Saints.

It is a small church with a big heart. 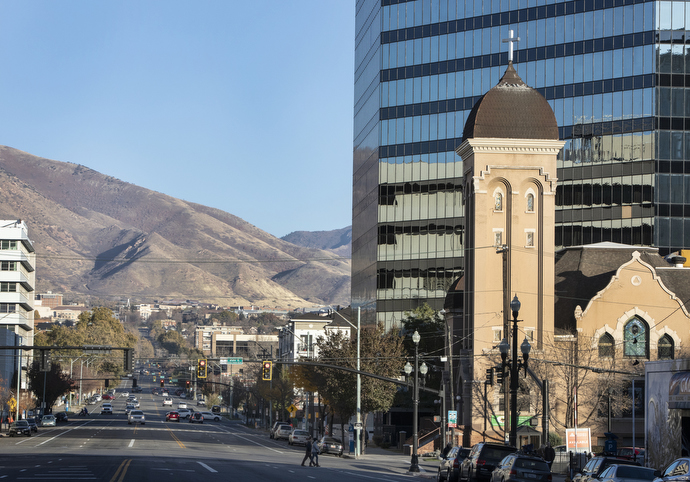 “I love how this church is an underdog, small but does a lot of powerful things,” said Scott Patton, a longtime member of the church. “There are no barriers to grace.”

On Sunday mornings, grace smells like coffee brewing and eggs cooking as the church opens its cozy basement kitchen and fellowship hall to homeless men and women looking for a warm breakfast and genuine welcome.

Church volunteers start cooking early for the weekly fellowship breakfast. On this chilly Sunday, people start lining up before 8 a.m. for endless cups of coffee. 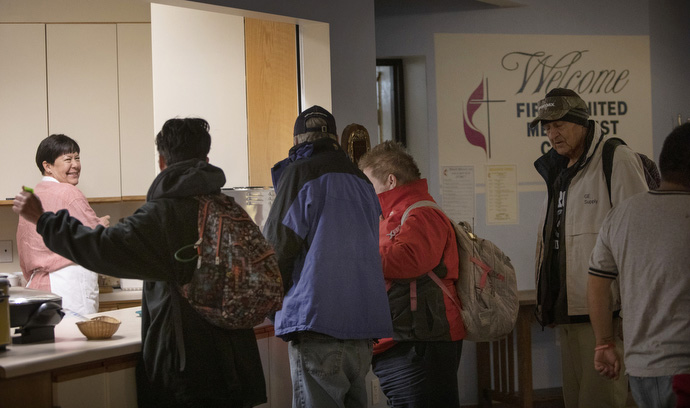 Ginny Hjalmarson greets the guests with an average of 15-20 pots of hot coffee in the kitchen during Sunday breakfast at First United Methodist Church in Salt Lake City.

Ginny Hjalmarson, known as “mom,” keeps everything flowing behind the counter. Her husband Larry is busy setting up the tables and greeting the men, women and occasional dog coming inside. Other church members are stirring eggs and frying meat for today’s offering of French toast, scrambled eggs and sausage.

When the Rev. Elizabeth McVicker, pastor of First United Methodist Church, arrives the group gathers around the diminutive woman and bow their heads as she prays: “Loving God, we are so grateful to know we are your children. Show your spirit to us this morning as we taste and touch love over this breakfast.”

The people are just as hungry for her words as for food.

The Rev. Elizabeth McVicker visits with guests at the Sunday Fellowship Breakfast at First United Methodist Church in Salt Lake City. She is in conversation with Rachel Ramos and Larry Neilson.

“Pastor Elizabeth talks to them, prays with them. They think of her as their pastor. They don’t like it if she can’t make it and I have to stand up and do the blessing,” laughs Larry Hjalmarson.

The fellowship breakfast was started about three years ago, said Larry Hjalmarson, who is a member of the governing board and oversees maintenance. It was inspired by a homeless man named Gilbert, who walked to the church from the rescue mission every Sunday. He became a member of the church, sang in the choir and put a new face on who the congregation thought the homeless were. 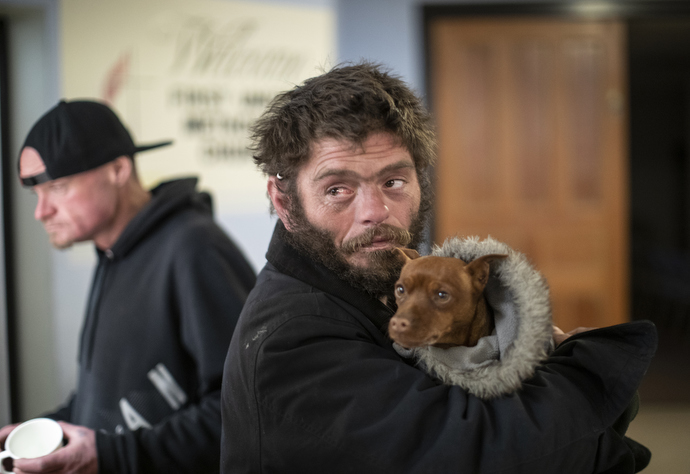 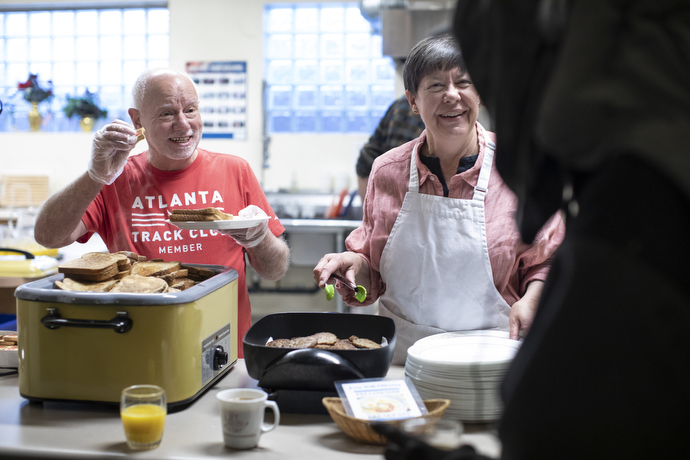 “He wasn’t scary, he was just homeless,” Larry Hjalmarson said. Gilbert asked him and a few other church members to consider offering a breakfast for people like himself who walked several long blocks to come to church.

Gilbert told the church members he was losing weight and expending more calories than he was taking in and needed more than a platter of cookies at fellowship time. That opened a door for the church to start a regular homeless ministry that now feeds from 50 to 70 people inside their doors on Sundays. 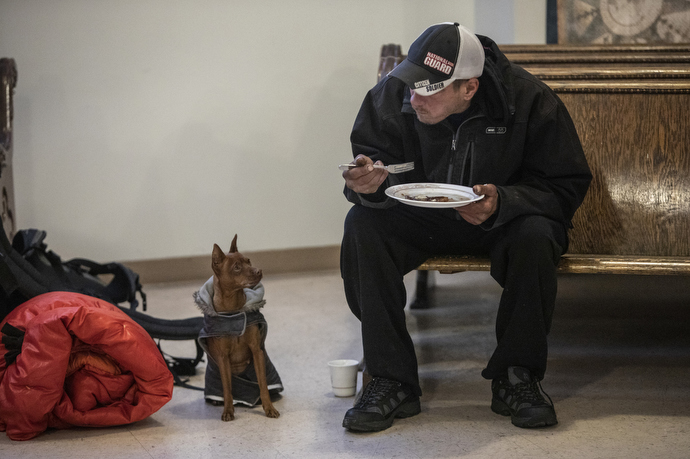 These days, Gilbert is no longer homeless, but the ministry continues to fill a vital need. Everyone is invited to the 10 a.m. church service but it is not a requirement. Some have joined and become regular members of the congregation. Some stay homeless, while still others like Brett Johnson become self-sufficient.

Johnson is Larry Hjalmarson’s right-hand man or maybe the opposite is true. Both chuckle at the thought. “Larry used to say he didn’t know what I could do. Now he says he doesn’t know what I can’t do,” Johnson said. 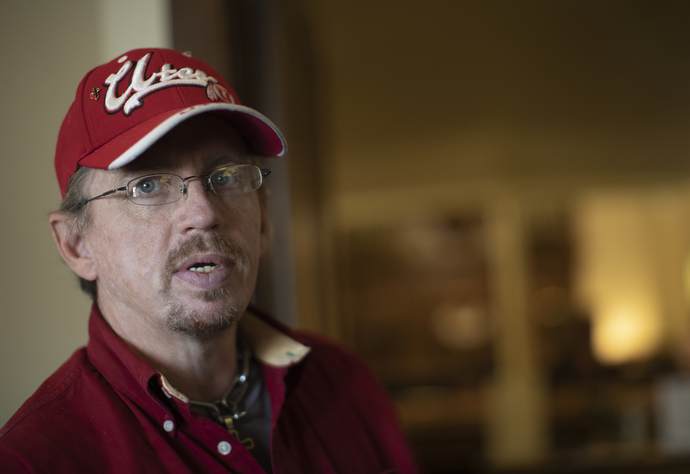 Johnson went through an emotional time with his children when he was younger and he had to give up his parental rights. He ended up in jail for six months for a couple of DUIs. When he left jail, he was living on the streets.

He wears a large chain around his neck as a reminder of those times. “Although I did the right things for my kids, I want to remember my sins,” he explained.

Johnson has learned to rely on his faith to get him through every day. He has started his own business, Odd Man Services, and has a waiting list of 20 people with jobs for him.

“I found when I stopped chasing the dollar that the money just comes in when I need it. I haven’t gone hungry in the past four years. It seems every time I need it, something just comes about and happens. I learned to let my faith just carry me through.”

Johnson is on the governing board at the church this year. “Brett believes in miracles,” Larry Hjalmarson said. “We need him more than he needs us.” 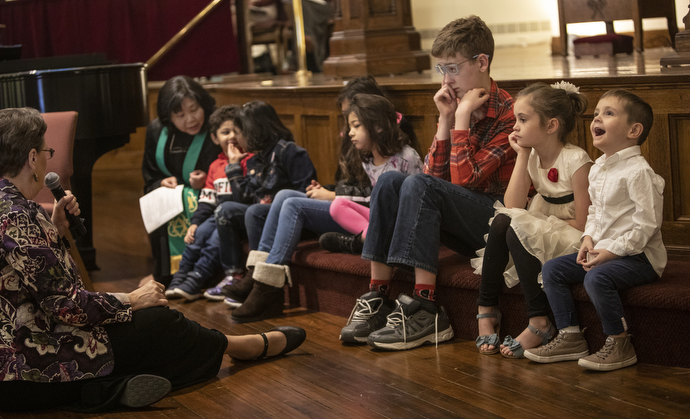 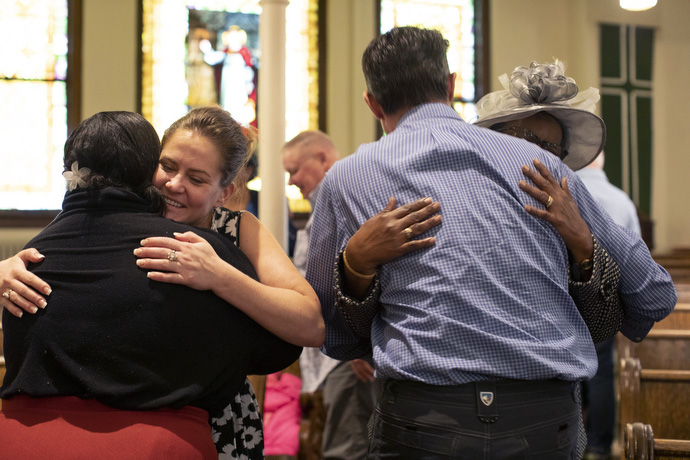 The pastor believes First Church is about love and welcome. “We don’t offer any social services, housing, they can get that somewhere else,” McVicker said. “What we can offer is community.”

The church also participates in Family Promise, housing a homeless family for two weeks in Sunday school rooms above the sanctuary. The program is an interfaith project and the families move from one church to the next until they get back on their feet.

“For me this ministry (Family Promise) tops the list because it is a holistic thing,” Larry Hjalmarson said. “It’s not just providing a meal like the breakfast but it’s taking them from homeless to living on their own again.” 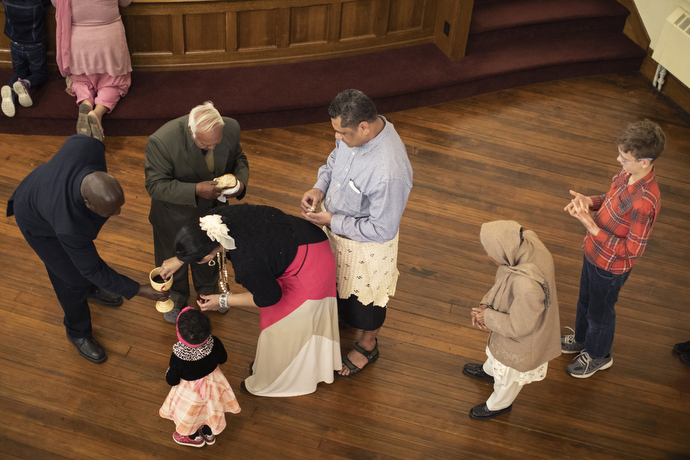 Clara Foundation, a school for Pakistani children, is funded by the church. First United Methodist Church also is a founding member of Crossroads Urban Center, one of the busiest food pantries in Utah, and members meet on the fourth Wednesday of the month to lead the worship service at Salt Lake Rescue Mission.

They also have a Guatemala Mission and host mission trips to provide medical and dental care to small villages.

“Our church is our home but it is a home we open up and try to use as much as we can,” said Patton. Narcotics Anonymous has been using the space over a quarter of a century, he said. They meet on Thursday and this year they were invited to a potluck Thanksgiving dinner sponsored by the church. 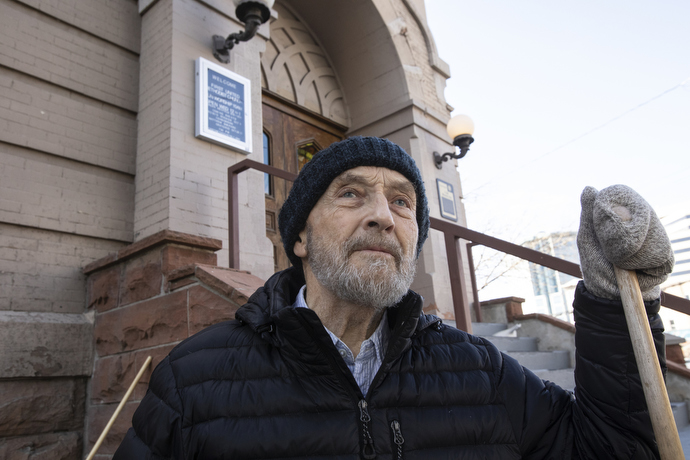 Joe Scheller volunteers working outside of First United Methodist Church in Salt Lake City as part of the Saturday work team on leaf cleanup. Scheller has been a member of the church for six years and is a former priest in the Eastern Orthodox Church. He is attracted to the diversity and ethnicity of the church.

Joe Scheller loves the diversity of the congregation. When he retired, he returned to Salt Lake City where he was born. He was visiting different churches and he remembered First United Methodist Church but had never attended. One Sunday he did.

“The thing that struck me was diversity, there were Africans, Pacific Islanders, just about every ethnicity you could imagine, and it just occurred to me, this must be what the kingdom of God is like in heaven. Been coming ever since.”

United Methodist churches in North and South Dakota step up ministry even as clergy and members join ranks of those infected.
Mission and Ministry

Feeding people is complicated but joyful

A former NFL player and an oceanographer are among those working to get fresh produce to where it’s needed.
Faith Sharing

“Chappy Jack” Layfield served as the 2019 Appalachian Trail chaplain. He has written a book of daily devotionals that chronicles his experiences on “the AT” and his spiritual growth as a result of the 2,200-mile hike.