That’s how Scott Mills starts the story of the restored pipe organ that reigns majestically over the sanctuary of First United Methodist Church.

The renovated Bigelow Organ Opus 38 is a 43-rank pipe organ originally built by Geo. Kilgen & Son and is the oldest in the state with the core components in their original location, Mills said.

When Mills first came to the church as music director, the organ was in bad shape. He and his partner Mike, who is the church historian, headed up a campaign to bring the organ back to its former glory using historic photos from the early 1900s.

The beautifully detailed stenciled pipes were recreated in 2015. 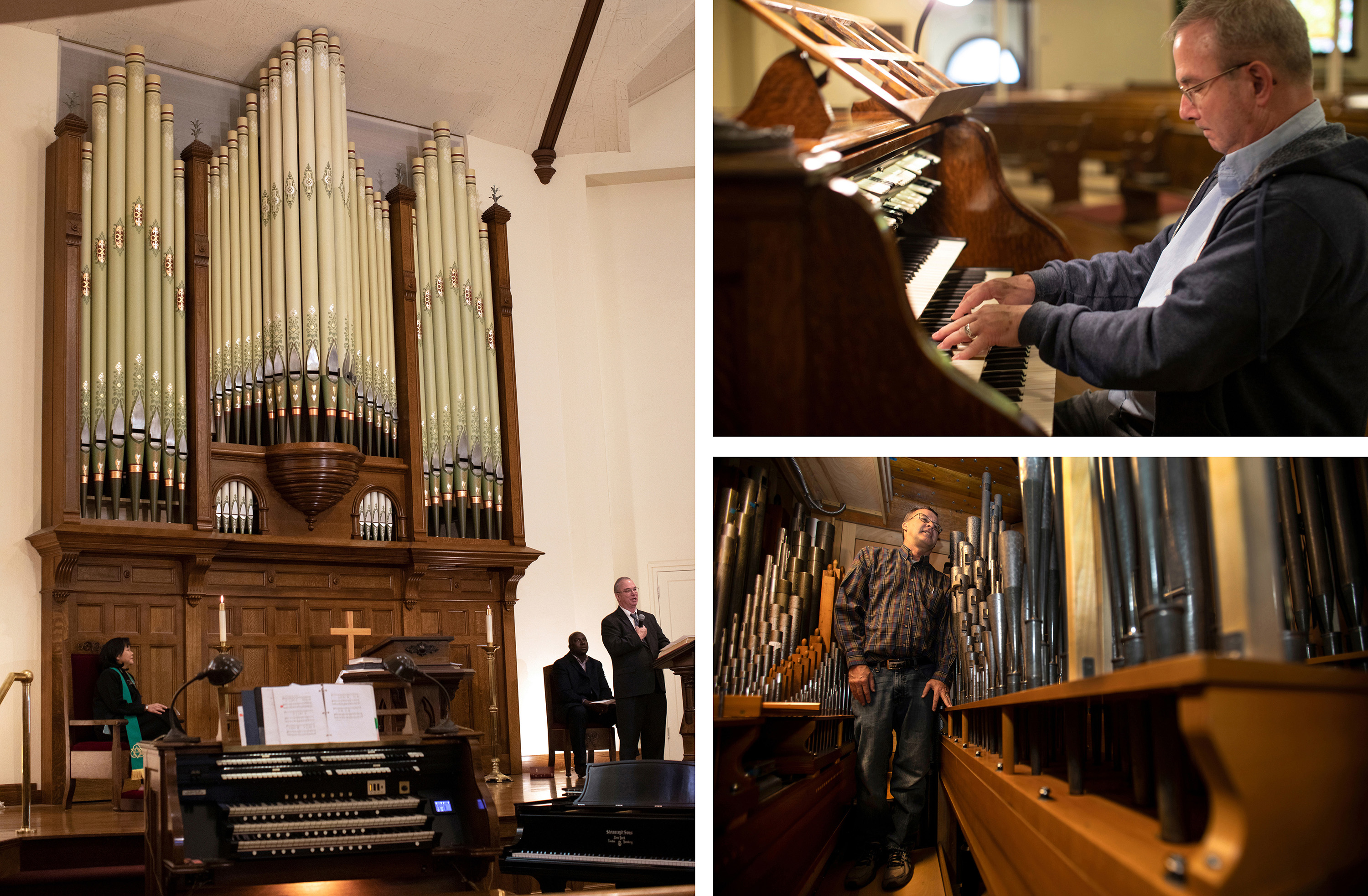 (Clockwise from left) Music director, Scott Mills, speaks from altar in front of the renovated Bigelow Organ Opus 38, a 43-rank pipe organ. Mills enjoys playing the organ on a Saturday. Historian, Mike Green, gives a “behind the scene” glimpse of the range of pipes not seen sanctuary.

In the 1970s and ‘80s it was popular to discard the wind-blown instruments for the electronic ones. That happened to this organ and he said over the years “a lot of the pipework had walked off.”

The church was able to find another vintage pipe organ and started talking to the Bigelow Organ Company about restoration. The organ company agreed to do the work. That’s when the fundraising started.

“At the beginning there were children that gave pennies and quarters,” Mills said.

One of the early campaigns was “Buy a Pipe” for $100. There were 2,500 pipes for sale, buyers were able to pick out which pipe they wanted. 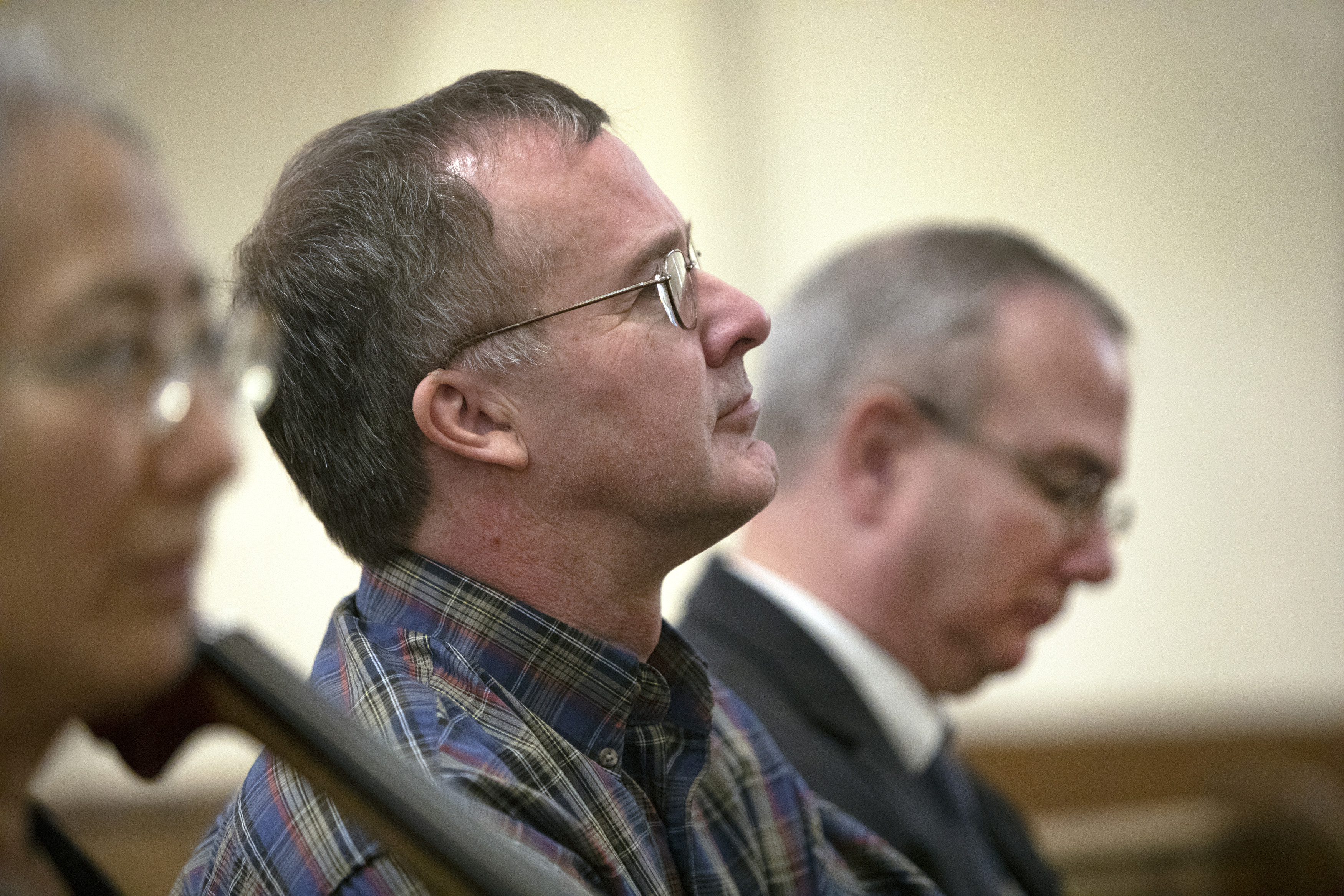 “One of our members, Ed, who is on a fixed income and lives in low-income housing, wanted to buy a pipe,” Mills said. “He handed us $4 once a month until he bought a pipe. His pipe is number 18, right in the center. He named it Peyton Manning.”

There are so many stories like that, Mills said.

They also got large donations from others, including the Church of Jesus Christ of Latter-day Saints. A plaque in the back of the sanctuary lists all the names and organizations that contributed.

In addition, the campaign funds were used to restore wood in the sanctuary to its former gleaming glory. Mills said when the carpet was replaced and the wood floor refinished it changed the sound and feel of the sanctuary.

Since its restoration, hundreds of concerts have been held at the church, ranging from large choirs with full orchestras to first-time violin recitals for young students.

In the hall outside the sanctuary, the church’s long and colorful history is told through newspapers, articles and photos.

First United Methodist Church almost seems like a tale of two churches. One is full of history and music, and the other is about the diversity and hospitality a downtown church can offer to a large city.

Becky Buxton, a member of the congregation, said both aspects are important and are a part of the church’s DNA.

“We have amazing energy,” she said.

The church would risk further marginalizing shut-ins and others by denying them a physical experience of the Body of Christ.